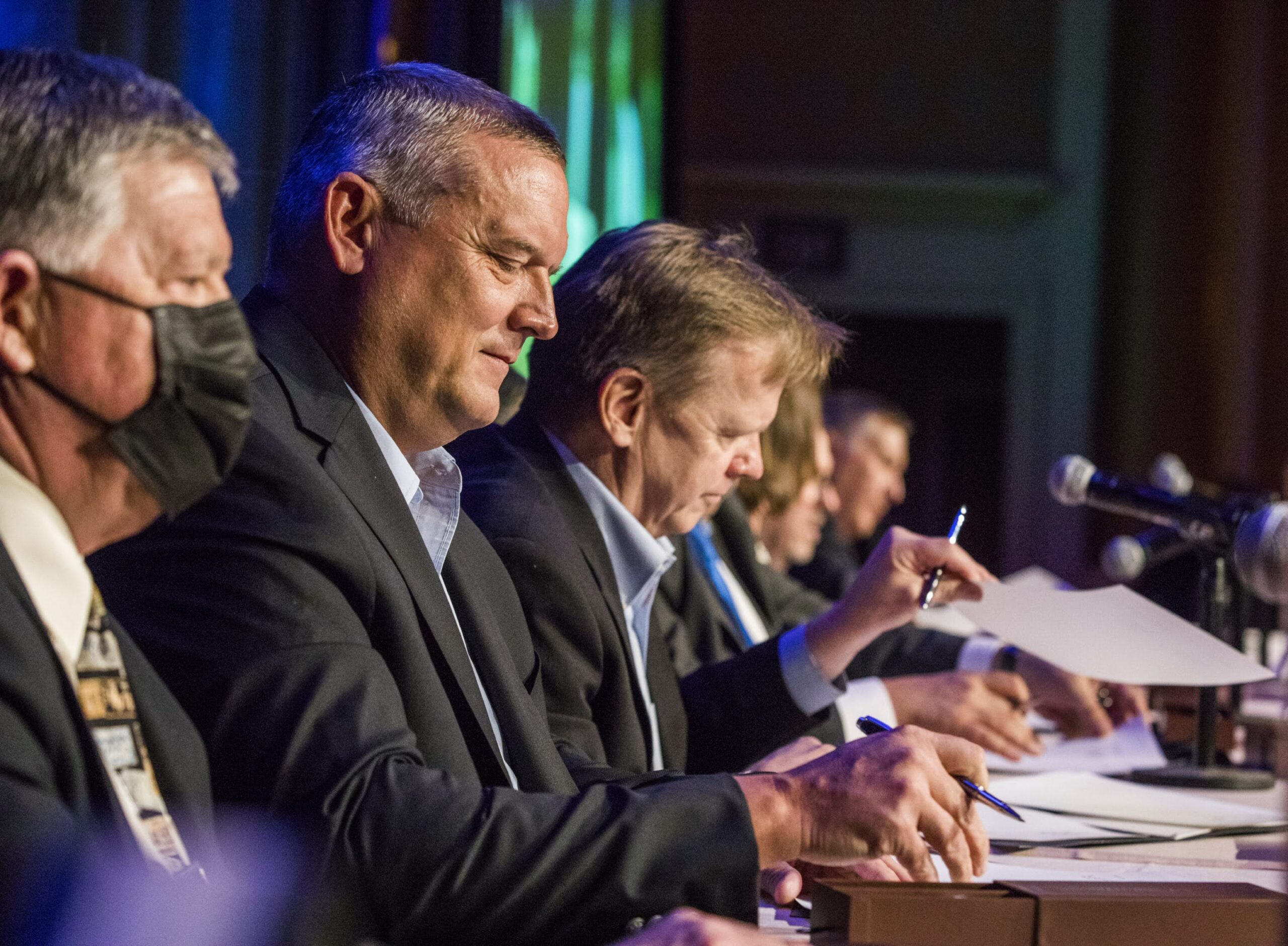 The newsletter will be off for the next two weeks during the holiday. Hope everyone gets some rest, and gets to spend some time seeing family and friends. See you back in the new year!

The message was clear from the outset: The situation on the Colorado River is serious. Speaker after speaker at the Colorado River Water Users Association conference in Las Vegas this week stressed the severity of the moment — and were using rhetoric to match it.

In opening remarks to the conference Wednesday, Southern Nevada Water Authority General Manager John Entsminger said that this was a “sobering moment” for a watershed that serves about 40 million people in the Southwest, spanning seven Western states and Mexico.

Pat Tyrrell, Wyoming’s representative for the Upper Colorado River Commission, said the issues facing the river today are “far more substantial” than they have been in recent decades.

At one point, Sara Larsen, interim executive director of the Upper Colorado River Commission, described it as an “unprecedented time” in the Colorado River Basin, one of “stress and challenges.”

The two largest reservoirs in the system — Lake Mead and Lake Powell — are far less than half full. Combined, they stand at about 32 percent, so low that the federal government declared the first-ever shortage on the river earlier this summer, triggering cutbacks in Arizona and Nevada. Forecasts released at the conference show Lake Mead continuing to drop without further action.

The conditions became more severe over the last year, as water managers watched far less water reach the system than forecasted. The shortage declaration, U.S. Bureau of Reclamation Commissioner Camille Calimlim Touton told the conference Wednesday, is “a recognition that the hydrology that was planned for years ago, that we hoped we would never see, is here.”

It is against that backdrop that water officials signed agreements aimed at preventing even more serious short-term consequences in the coming years. The first was a strategy known as the 500+ Plan. It’s a memorandum of understanding among the United States and Colorado River officials within the Lower Colorado River Basin states: Arizona, California and Nevada.

The 500+ Plan aims to keep an additional 500,000 acre-feet of water in Lake Mead over the next two years (an acre-foot is the amount of water that can fill one acre to a depth of one foot). The idea behind the plan is that leaving water in the reservoir will help prevent it from dropping to critically low elevations, at which point there would be increased risks and real-world consequences for operating the Colorado River’s reservoirs, which also generate hydropower.

Those agreements, in more ways than one, build off a Lower Basin Drought Contingency Plan (DCP) signed in 2019. The DCP included a provision requiring the three states to consult and agree to additional measures to stabilize Lake Mead in the short term. Those measures have now become the 500+ Plan. The 500+ Plan is also significant because it builds on partnerships that were created during the DCP negotiations.

“This level of the crisis demanded speed, which was only possible based on the strong working relationships that we developed when crafting the original DCP,” said Gila River Indian Community Governor Stephen Roe Lewis.

The 500+ Plan, he added during a signing ceremony Wednesday, “demonstrates the vital role that sovereign tribal nations can and are playing in helping to preserve the Colorado River.”

A third resolution was signed among water officials, the federal government, and NGOs including the Environmental Defense Fund and Business for Water Stewardship, a group representing major corporations such as Google and Target. That resolution did not single out specific actions, but it instead called for collaboration and “consensus-based solutions” in general terms.

Despite signing three agreements Wednesday, Colorado River negotiators acknowledged that addressing the river’s issues will require a long-term approach. The Colorado River faces an imbalance in supply and demand as the river, which once averaged about 15 million acre-feet of water, has seen far less to the system in recent years, closer to 12 million acre-feet.

Climate change is affecting the way that water cycles throughout the watershed. In recent years, inflows into the river, fed by snowpack, have registered below the 20th century average. Even in years with nearly average snowpack, water managers have watched positive forecasts turn into poor water years with low runoff because of arid conditions across the region.

“The 500+ Plan is, as some have opined, a temporary solution,” Tyrrell said on Wednesday. “Work toward longer-term solutions to the challenges worsening hydrology presents us is left for another day —  the day which we all know is coming very soon. In the end, our overarching goal must be to work toward a sustainable future for the Colorado River Basin. Period.”

Snow is falling across the state: From Lake Tahoe to Lee Canyon outside Las Vegas, we got a much-needed storm on Tuesday. The snowpack across the state — and the West — plays a crucial role in our water supply, acting as a natural reservoir that stores water until it melts off throughout the spring. As the temperatures warm and the climate dries, the cycle of how this snow falls and melts is changing, and forecasted to continue changing into the future.

Fernley lawsuit denied: A federal judge dismissed a lawsuit filed by Fernley over lining the earthen Truckee Canal. In the ruling, District Court Judge Miranda Du wrote: “Because Fernley and Intervenors lack prudential standing to bring their primary National Environmental Policy Act (“NEPA”) claims as their interests are economic rather than environmental, Fernley fails to state a claim for nuisance under federal common law, the Court declines to exercise jurisdiction over Fernley and Intervenors’ state-law declaratory judgment claims involving unsettled questions of state water rights, and as further explained below, the Court will grant both motions to dismiss.”

“Death traps for cavity nesting birds:” The Reno Gazette Journal’s Amy Alonzo looks at past and present efforts to regulate and remove PVC pipes that mark mine claims but can trap birds, including the mountain bluebird, Nevada’s state bird. Federal land managers in 2013 referred to the PVC piping marking mining claims in the state as “death traps for cavity nesting birds.”