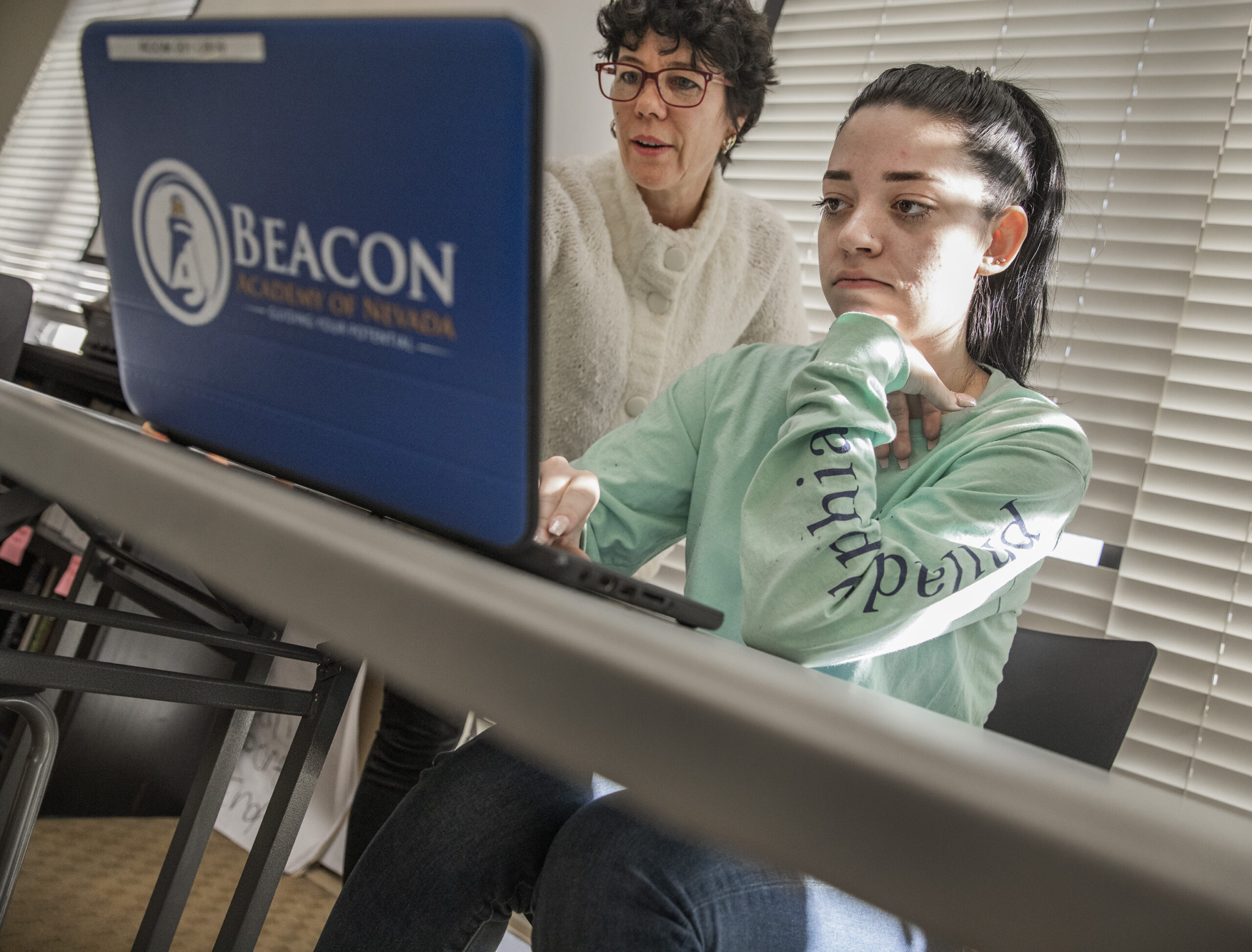 Editor’s Note: This story is part of an occasional series profiling learning environments that exist across Nevada’s K-12 education landscape.

Now, all three are looking forward to graduating from Beacon Academy, a charter school with a distinct mission: Help at-risk students overcome their educational hurdles and obtain that coveted diploma. The school, housed in a nondescript office building in the western valley, serves 430 students and has a waitlist of about 25 students.

“We take as many students as we can because we can’t refer them anywhere else,” said Andrea Damore, the school’s executive director of academics. “We know that if they come to our school and commit to our program, they will be successful.”

Beacon Academy stands as a last chance of sorts for students who are severely credit deficient, under court supervision or on a special education plan, Damore said. Students must fit into one of those categories to be accepted, but often times, they fall into several. On top of that, some are homeless, young parents or helping financially support their families.

For those reasons and more, a traditional school environment didn’t work for this student population.

Larios said he floundered in large class sizes and wound up goofing off with friends rather than facing his learning challenges. He continued failing classes at Desert Oasis High School and eventually fell so far behind that graduating on time would be impossible. So he started looking for other options and stumbled upon Beacon Academy, which relies mostly on word-of-mouth referrals.

Students attend classes at Beacon Academy at least twice a week as they complete courses on a nine-week schedule. They work remotely the other days. The blended-learning model proved the right fit for Larios, who said he benefited from the one-on-one instruction time. He expects to graduate in May and join the trades.

The school’s own story isn’t all that different from that of the students it serves. Damore and Tambre Tondryk, executive director of operations — both Clark County School District expats — came to Beacon Academy in 2014 when it was an online school serving all types of students. At the time, it was considered a failing school within the Nevada State Public Charter School Authority, hence the leadership change.

Ultimately, the Beacon Academy board and staff decided to change course and only serve at-risk students — a decision that led to an amended charter contract and an alternative performance framework with the Nevada Department of Education. The State Board of Education approved Beacon Academy as a credit-recovery school last summer.

Beacon Academy is one of 28 schools statewide that fall under an alternative performance framework, which holds them accountable to a different set of academic benchmarks given their unique populations. Many Beacon Academy students, for instance, won’t graduate within their cohort year because they’re generally too far behind when they enroll. Instead, students can attend Beacon Academy until they’re 21 years old, giving them extra time to catch up on work and graduate.

“It’s an educational option that we have to have for students who need a school of last resort,” said Jason Guinasso, who chairs the Charter School Authority. “The alternative is that those kids don’t get an education.”

Beacon Academy is the first and only school within the Charter School Authority that has an alternative performance framework, but its mission particularly resonates with Guinasso. He dropped out of high school for a period and was involved with a gang. The older gang members, however, knew he didn’t quite belong in their world and forced him to attend an alternative high school in Washoe County, he said.

The non-traditional school environment, Guinasso said, was a turning point that helped him get back on track academically. Eventually, he re-enrolled in his original high school and graduated.

“There are kids like that that just need that helping hand to get from where they’re at,” he said. “I remember how intimidating it was to face being so far behind and feeling like you’re not going to be able to make it.”

Olivia McCoy knows that feeling all too well. Her mother, who battled severe mental health issues, kept McCoy and her younger brother out of school for years — essentially making her a dropout student by middle school.

It wasn’t until an aunt gained custody a year and a half ago that McCoy returned to school. She enrolled at Beacon Academy in August 2017 filled with fear. Her yearslong learning hiatus meant math seemed like a foreign language. Writing could be difficult, too.

So far, McCoy has earned 12.5 credits and has 10 more to go before graduating. She also has a 3.2 grade-point average. The 19-year-old dreams of becoming a crime scene analyst one day or maybe a therapist. Either way, she’s determined to obtain her diploma and attend college.

She has a newfound appreciation for school.

“You’re supposed to learn in life,” she said. “Coming here, all the teachers are so willing to help you. They make learning fun.”

Beacon Academy officials want to replicate those type of student success stories. They’re aiming to open a second school serving at risk-risk students within two years in the eastern valley.