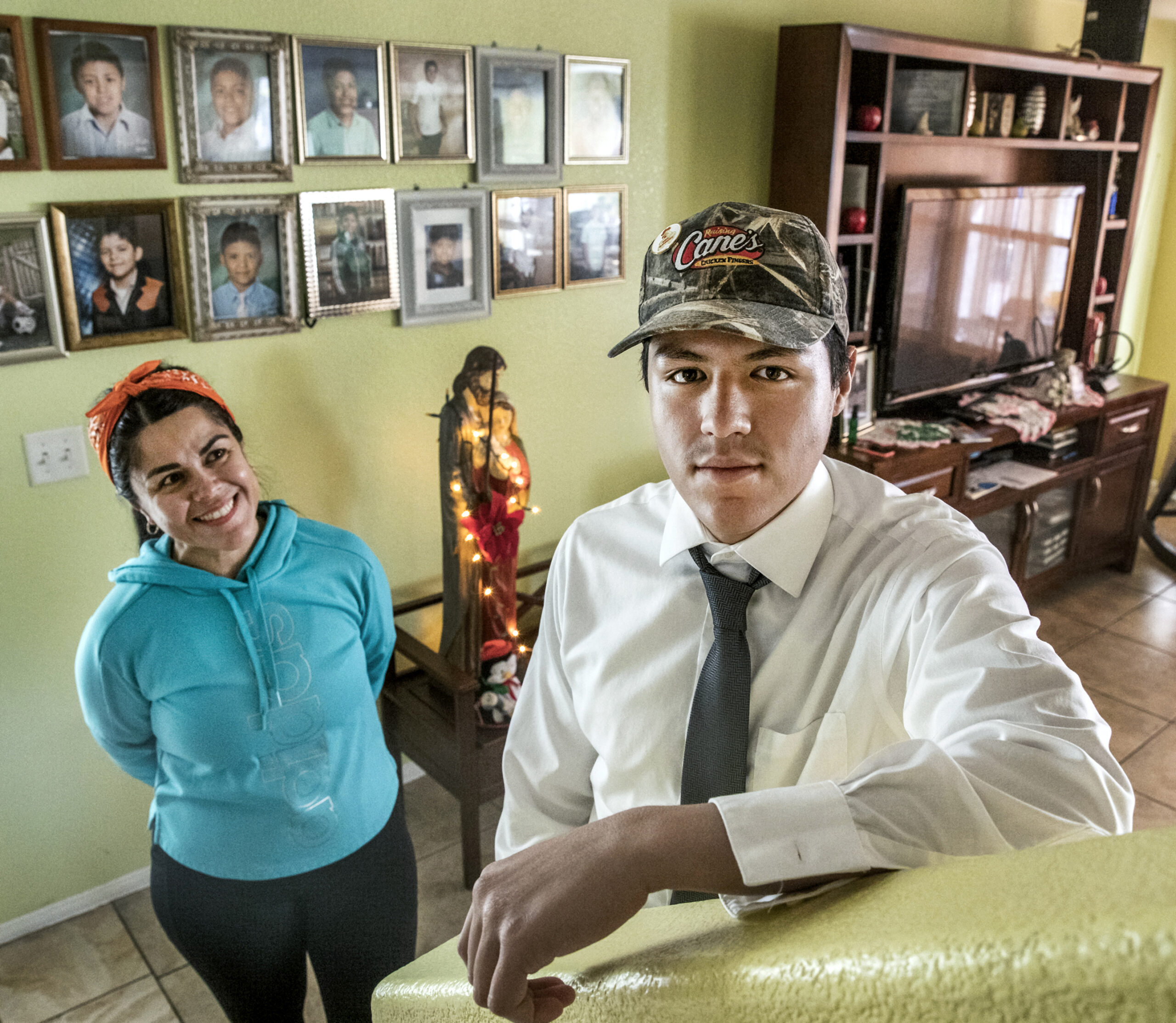 If high school is considered a full-time job, then a growing number of Southern Nevada students are pulling double duty.

After hours of remote learning, Jaelynn Ciballos, 17, dashes off to her Dutch Bros. Coffee job; Martin Bueno-Garay, 17, heads to his Raising Cane’s gig; and Paola Martinez, 17, drives to the medical office where she works.

They’re all relatively new entrants to the labor market, spurred by a common goal: Help keep their families afloat financially. An after-school job — not an uncommon teenage ritual — has become a necessity for some students who have watched their parents lose jobs or struggle to pay bills during the pandemic. Educators say they’re noticing more students juggling extra work hours around their remote learning schedules, with some listening to virtual classes on the job or en route to one.

Bueno-Garay, who is a junior at Rancho High School, works roughly 30 hours each week.  He rises at 6:30 a.m. to finish homework before logging on to virtual classes. If he can squeeze a run or brief workout in between classes, he will because most days there is no time after school. He works at Raising Cane’s three to five days a week, usually beginning an eight-hour shift at 3 p.m. He tries not to think about time in the traditional weekday and weekend structure, instead letting one day blend into the next. Envisioning an end point, he said, could be disastrous. He might shut down.

“When I shut down, it’s like you kind of turn yourself off and become lazy,” he said. “I don’t like that.”

When Darlin Delgado, principal of Rancho High School, hears people criticize today’s students, she cringes. She says they’re “better humans,” who are kinder and more compassionate despite growing up inundated with technology and social media. Delgado said she noticed more students talking about getting jobs late last spring and, like Bueno-Garay, knows many are helping their families make ends meet.

The coronavirus-related shutdowns battered the region’s economy, which relies heavily on tourism. Las Vegas’ unemployment rate of 10.4 percent is the highest among the nation’s largest metropolitan areas.

“Many of them are growing up really fast right now during the pandemic,” she said.

Bueno-Garay always assumed he would get a job once in high school. But the pandemic accelerated his hunt. His father’s pool-cleaning business remained relatively stable, but his mother was sidelined from her job as a housekeeper at a Las Vegas Strip casino. In June, he landed a job at Raising Cane’s.

Now, Bueno-Garay gives his parents at least $100 each month to help cover household bills. The rest he socks away for future needs — car insurance once he get his license and college tuition. He wants to become an orthopaedic surgeon and has the Advanced Placement course load to boot. When stress creeps in, the 17-year-old said he tries not to let his parents or younger brother see. He doesn’t want them to worry. But sometimes he skips their invitations to watch television or grab ice cream.

“That inclination to go with my family declines because I’m usually thinking I have to do this homework or this or that,” he said.

Jaelynn Ciballos can identify with the go-go-go mentality. She generally works about 25 hours per week at Dutch Bros. Coffee, happily greeting customers outside while taking orders or making their drinks inside. When Ciballos has rare downtime, she prefers staying home. Maybe listening to some music.

“Since I’m always out and about, I just need that time to not do anything,” she said.

Still, the 17-year-old shrugs off any notion that she’s doing anything extraordinary by giving her parents a few hundred dollars to pay bills. Ciballos, a junior at Equipo Academy, said her parents spent years putting their children’s needs first and, now, she can repay them during their time of need. Her dad lost his cafeteria manager job at a local charter school because of the pandemic.

Earlier this school year, Ciballos learned that many of her peers are in the same position. Her advisory group teacher one day asked students to raise their hands if they’re working outside of school. Nearly all hands shot up.

“It was kind of really weird for me to realize that like, dang, all of my classmates are working too,” she said. “And I’m not the only one struggling.”

Paola Martinez, a senior at Equipo Academy, is among the horde of working students. Her father was laid off from his construction job, and her mother’s hours were cut at a restaurant. The sudden change spurred Martinez to apply for a clerical job in the same North Las Vegas doctor’s office where her sister works.

“My mom did not want me to work,” said Martinez, who was offered the position and started last spring. “She wanted me to focus on school, but stubborn little me insisted.”

Originally, Martinez, who works 20 to 30 hours a week, gave the majority of her income to her parents and kept $100 from each check for herself. But her mother recouped some work hours at her restaurant job, so now Martinez only gives about half her earnings to help the family with groceries or household bills. She’s saving the rest for college, a dream her parents instilled in her from a young age. She would be the first person in her immediate family to attend college.

“I wanted to get an education to help myself and help them when they’re older,” she said.

Ramona Esparza, principal of Valley High School, said that type of mindset is common among her students. She estimates at least a third of her students are working after facing this choice — keep a roof over their heads or graduate on time?

“They’re choosing to work to support the family,” she said. “Within certain cultures, the family comes first.”

Plus, Esparza said she has heard students mention finding work — usually entry-level gigs at fast-food eateries, grocery stores and landscaping businesses — more quickly than their laid-off parents, some of whom spent years or decades doing the same job before the virus altered the economic landscape.

She, too, views this generation of students differently. Esparza compares their resiliency to the children and teenagers who lived through World War II and the Great Depression. But the pressures are causing some to fall behind academically, she said, meaning schools need to support their learning however possible.

“Giving kids grace right now means that the way we educate kids has got to change,” she said. “So what if they turn in the assignment late? They still learned it.”

Equipo Academy has given students the choice of remaining virtual or coming in person, said Alyse Sobosan, the school’s director of college access. About 80 percent chose the distance learning option, in part because of their work schedules.

Additionally, staff have been working closely with students to ensure they are excelling academically while also meeting work or family obligations, she said. Sometimes that means finagling schedules to accommodate the work-school balance.

Martinez, for instance, dropped an Advanced Placement Calculus class because she didn’t need another math credit to graduate. Doing so freed her up for more work hours and lessened her academic burden.

“I think it is more on our radar this year than it has ever been,” Sobosan said. “There’s still always more consideration we can give to our students’ outside lives and how they play a role here when they’re on campus.”

“I think we just need a big resyncing of what’s important to us and what is going to lead to success for our kids,” she said. “That might look something like changing the way we serve our students and families with flexible scheduling options.”

The scheduling issue with in-person school and jobs may not materialize this year, though. While some charter schools are offering in-person instruction, the Clark County School District is only bringing back pre-kindergarten through third-grade students starting March 1. It’s unclear whether high school students will finish the year remotely or in brick-and-mortar classrooms.

So far, the three students interviewed for this story — Jaelynn Ciballos, Martin Bueno-Garay and Paola Martinez — say they’re managing to keep their grades up while working.

But it hasn’t been a breeze. Bueno-Garay said he recently requested a few days off work so he could study and boost his pre-calculus grade. Martinez, meanwhile, pulled an all-nighter finishing a project for her psychology class. And Ciballos said she is feeling stressed with a big assignment as well.

“A lot of people don’t realize high schoolers are hustling because of the pandemic,” Ciballos said.

By the time Friday rolls around, Martinez said she sometimes retreats to her bedroom in pure exhaustion. Other days she heads to the kitchen to bake as a stress reliever.

The students said their fatigue, though, has been offset by personal growth. Bueno-Garay, a self-described introvert, said he has learned leadership skills by interacting with his coworkers. And cooking chicken in a fast-paced environment while on his feet has taught him more about time management.

“It’s fast food,” he said. “That helped me become more aware of the time I had.”

Ciballos said she felt her confidence grow after creating a resume, snagging a job, learning her new duties and expanding her social circle. The experience makes Ciballos want to take more risks, such as applying to universities in neighboring states or on the East Coast. She dreams of becoming a pediatric surgeon.

But the teen is also dealing with a new quirk of her busy life: