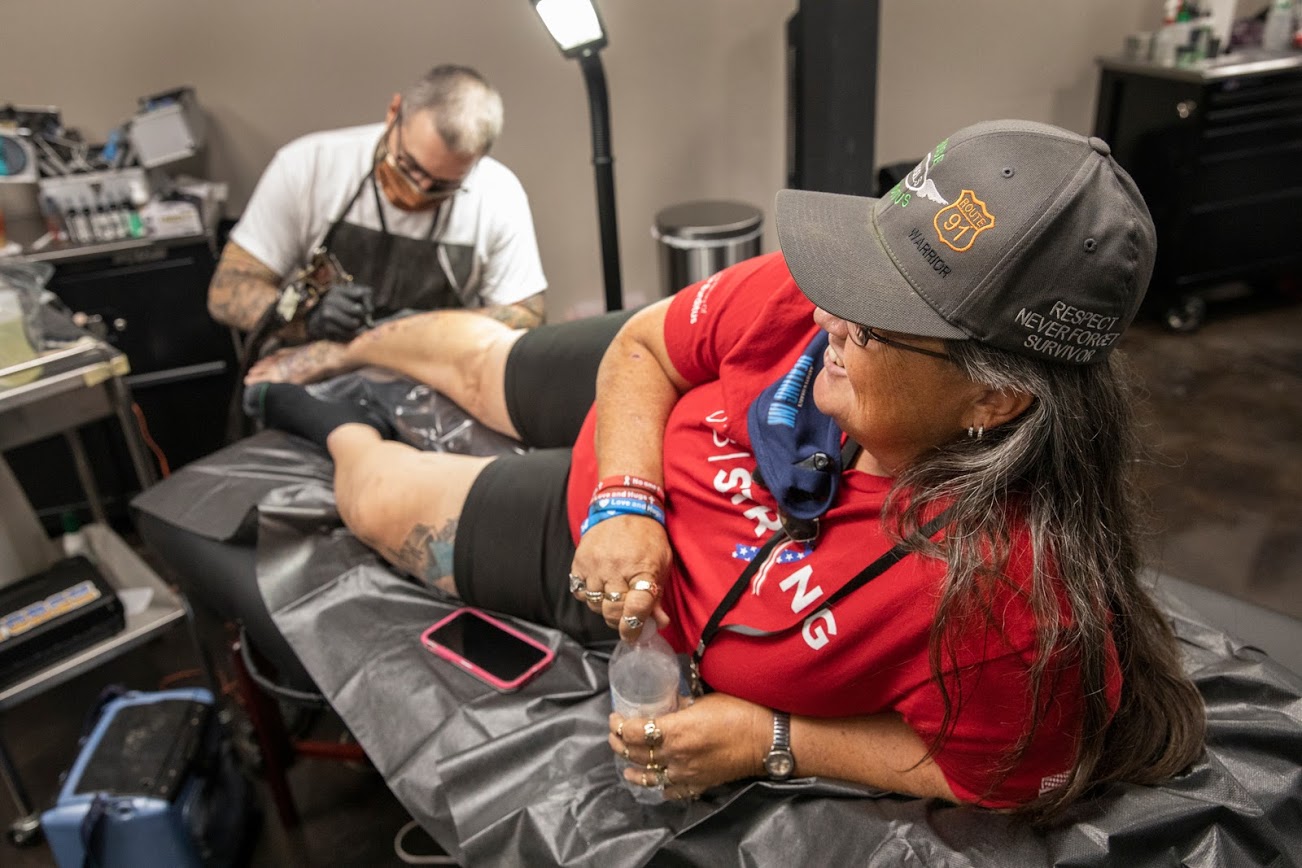 Tacoma resident Dean McAuley tried to attend a Kenny Chesney concert recently, hoping to reclaim the country music that had been the soundtrack of one of his darkest nights.

But positioned so close to the stage, he ended up crumpling to the ground in a panic attack. The music unleashed the terror he lived at the Route 91 Harvest festival in 2017, when he barricaded behind trash cans that took fire and made a phone call to his boss that he thought might be his last.

An off-duty fireman, he used his training that night to administer first aid to people at the festival grounds and was able to save one teenager — then-17-year-old Natalia Baca — when he attended to her at an EMS tent and ushered her to the hospital. But he’s also haunted by the “what ifs.”

“I'm living this all the time,” he said. “And then you start replaying stuff in your head. You start wondering — you know, the two girls that didn't make it that I worked on. You start asking yourself if you did everything.”

McAuley’s healing journey in the last three years has included going to therapy and changing his role within the fire department to move away from certain frontline work. But on Wednesday, it also included adding a permanent reminder of the shooting to his arm.

McAuley, 49, was one of 18 people chosen to receive a free tattoo from 17 artists volunteering their time as part of the “Healing Ink” initiative. He proposed the idea of a guitar and the words “I got what I got, I don't miss what I had” — lyrics from a new song by Jason Aldean, who was playing when the shooting began — but he left the rest up to the artist.

The very act of surrendering control of the design is an extension of a lesson he’s learned through the trial.

“As a firefighter, we're always trying to control the organized chaos,” McAuley said. “I’ve got to let go of control in order to be helped and to get healthy.”

Healing Ink launched in 2016 as an initiative of Artists for Israel, a group that historically has used street art to express support for Israel and help communities affected by terrorism. Participants in the project use tattoos as a way to cover up the scars of people affected by war and terrorism, but have more recently branched out to work with survivors of other tragedies, including the 9/11 attacks and the Pulse nightclub shooting.

“Some people are seeking to be healed. Some people want a memorial for a loved one. But the overall consensus is it's helping people gain their identity back,” said tattoo artist Zach Turner, director of Healing Ink. “They couldn’t choose to be shot, but they can choose to get a beautiful piece of artwork permanently etched into their skin.”

With the ongoing pandemic, the group had to cancel its annual event in Tel Aviv. While discussing alternatives, a documentary on the Route 91 Harvest shooting was playing in the background.

It dawned on Turner and the other organizers that they could bring the initiative to Las Vegas. The response was overwhelming, and they said they had a tough job trying to narrow the list of applications down to 18 tattoo recipients.

One of them was Las Vegas resident Heather Gooze, who got a tattoo of a feather and birds on her leg with the words “be your own kind of beautiful.” The feather includes the colors yellow, red and green — the colors of the wristbands she wore for each day of the festival where she worked as a bartender.

Gooze, 46, stayed in the festival grounds until dawn with those she calls “angels,” first holding the head of victim Christopher Hazencomb and helping him get into a car before he succumbed to his injuries, and then staying with Jordan McIldoon, answering his phone, until the coroner came. She said she would hope a stranger might also hold vigil with her body if the roles were reversed.

“I would wonder if somebody would stay with me,” she said, “make sure that people knew who I was, where I was from and tell my story so that they understood what was going on.”

As time has passed, she’s found she can now talk about the experience without crying. But she still gets anxious over the sound of fireworks and searches for escape routes when she goes out.

“Anybody that says to us ‘get over it’ or ‘you should be over it by now’ or ‘move on’ or whatever —  that's ridiculous,” Gooze said. “It's a part of our existence, basically, at this point. We're never going to get over. So instead you need to embrace the new you.”

Being around other festival attendees on Wednesday who understand what she’s been through was healing, she said. And she hopes people ask about the meaning of the tattoo, so she can tell the story of Healing Ink coming to Las Vegas and keep a conversation going about how to make the world a better place.

“As a warrior, you owe it to the 58 that passed to live the best life you can,” she said. “And we should never forget there needs to be changes in this world made so that you know this doesn't happen again.”

Sue Ann Cornwell left the tattoo studio on Wednesday with an image of an American flag in the shape of a cowboy boot, as well as the music notes from the opening bars of “God Bless America.” It was a song that Big and Rich had played that fateful night four times because the crowd would not stop singing, she said.

“I have never had that song touch me and affect me the way it did that night. It went right to my heart. I mean, I had goosebumps,” said Cornwell, 55. “I like to look back at the amazement in that moment, and believe that it was God's hand bringing us all together …  I think that moment gave us the emotional strength to be able to, for me, go back in nine times and help people.”

Cornwell, who had just retired from driving a school bus in Las Vegas when she attended the concert, noticed before others in the crowd that a speaker had been shot and was catching fire. She jumped into action, telling her sister and a nearby pregnant woman to get down, then she laid on top of them to protect them with her body.

She told others to find shelter under the stage. She hoisted some over fencing. She put one woman who was gravely injured in her truck, then started driving over sidewalks and through red lights trying to get her help, until a nurse tending to the woman told her, ominously, that she could slow down because the woman had succumbed to her injuries.

“That was the worst part of the night because I felt completely useless at that moment,” she said. “I couldn't help her.’

Cornwell took it upon herself to decorate a tree on behalf of the woman, Denise Burditis, at the Healing Garden dedicated to victims, and has since taken it upon herself to ensure the memorial is maintained. She’s noticed that in the last three years, people affected by the shooting have gone from being unsure of how to talk to those who had lost a loved one to becoming a family.

She talks with Burditis’ family frequently. The pregnant woman she shielded from bullets gave her daughter the middle name “Sue Ann.”

“I focus on the good of that night,” Cornwell said. “And as tragic as it was, the love that has come out of it, and the support and how everybody just cares for each other ... we truly have become the Route 91 family.”

Artists for Israel CEO Craig Dershowitz tends to gravitate toward first responders, and he finds that beyond police and firefighters, there are hospital personnel and so many others who help in a tragedy. With the focus often on the negative, on the perpetrator, the tattoo events have reinforced for him just how many people were doing the right thing.

“Every time there's something, there's just as many people doing good,” he said. “We want to celebrate and give them a reason to look back with pride and know just how much they did and that the world sees them and truly gives them credit and honor.”

For McAuley, the lyrics on his arm now — about not missing what he had — symbolize his acceptance that he is a changed man because of the shooting. In spite of the ups and downs he still has, he said he has a better understanding of addiction and suicide; he’s more empathetic.

And it’s refocused him on his family.

“It's changed me as a husband. I recognize that my true ripple effect on this world is not going to be saving patients with the fire department or putting out fires,” he said. “The dad and the husband I am is going to be what I leave on this earth.”