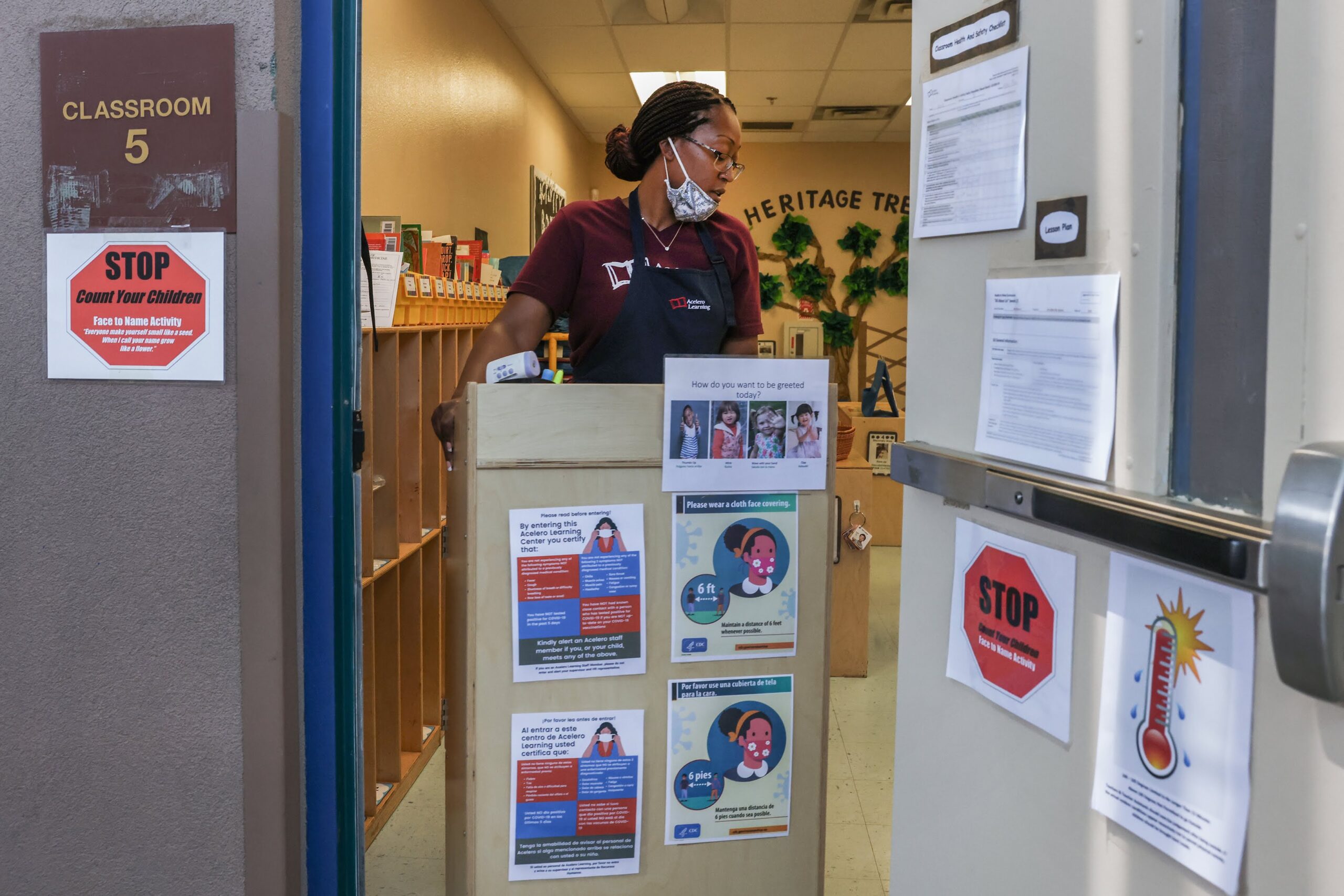 North Las Vegas resident Cassandra Hall previously owned a home daycare for babies, but had to close it four years ago after having carpal tunnel surgery.

After a more recent layoff from her hospitality job, she’s now trying to get back into the child care industry, which is experiencing a severe shortage of capacity and has become a major focus for state officials flush with newly available federal funds.

Hall received a $10,000 grant from Wonderschool, a Black-founded organization that increases access to early education, and went through its rigorous 12-week program. Both were funded by American Rescue Plan dollars and will allow her to open a home-based, high-quality early learning daycare called Children of the Way Learning Center.

“I always dreamed about having my own daycare center [again],” said Hall, whose center is set to open at the end of September for kids 3 1/2 to 5 years old. “Wonderchool gave me a great opportunity to take the advantage to get back.”

There are roughly 177,000 Nevada children younger than 5 years old, with only 445 licensed child care centers in Southern Nevada and 195 licensed child care providers in Washoe County. Experts say they are unsure how many centers are needed, but note that many ZIP codes have up to three kids waiting for every slot available for early childhood education.

The $1.5 million Nevada Strong Start Child Care Services Centers (CCSC), also referred to as child care hubs, opened to help beef up resources for child care providers by expanding and streamlining information and tools through free online services. The hubs, powered by Wonderschool, are a public-private partnership between the Children's Cabinet, the Nevada Division of Welfare and Supportive Services, and the Nevada Department of Health and Human Services (DHHS) to address the child care crisis.

“We’re working with a variety of partners to encourage folks to go into child care services and help them get the proper training,” said Karissa Loper Machado, the agency manager for the Child Care and Development Department at DHHS. “You do have to have a workforce that has continuing professional development, who cares for children.”

Wonderschool is an online digital platform that prepares people to open and run home-based, high-quality child care businesses in 15 cities across the nation, as well as fostering a community for providers and families. Through the platform, providers can manage their business and resources online, build community, receive coaching and share updates with families all in one place.

Machado said the hub in Las Vegas has been servicing about 80 child care providers a month since February when it opened.

“[Providers] are treated as customers and partners of the child care services center … the hub that includes just a variety of partners who are dedicated to helping child care providers with professional development, with curriculum building, with all of those things,” she said.

Hall said she received a lot of support from Wonderschool staff and that the program was challenging but achievable.

“The hardest part for me was just getting on a computer and learning how to upload and download,” Hall said. “That was the hardest for me, just not knowing how to work with technology.”

Nevada was ranked last in the nation for early foundations, or programs aimed at shaping children mentally between birth and eight years old, which are factors that contribute to the well-being of children, by the Education Week research center in 2021 after receiving a score of 76 percent, below the national 84 percent average.

With that history, early learning experts worry the new resources might fall short of benefiting the community because they will sunset after two years, and chronic staffing shortages could stymie progress.

Machado said maintaining a trained and available child care workforce has been a challenge for the state because interest is low, and so is pay — staff start off making $9-$13 per hour and typically make up to $18 per hour with a college degree or experience. The $18 an hour rate would put the annual pay at just above $37,000 a year for a full-time employee.

"It is great that they're making investments,” Tyler-Garner said. “I think they should invest even more … because we also have to look at how we build capacity, and in particular, how we build the capacity of that workforce.”

She said the wages are low because historically, government reimbursements have not covered the cost of doing business in child care.

Latasha McCall is director of Acelero Learning on the west side of Las Vegas — a child care center that is part of the federally-funded Head Start program. She said maintaining quality staff was a challenge.

“Teachers have the lowest pay … they’re the lowest on the totem pole,” McCall said. “No one wants to work these jobs because of the stress level … and then there's no money in it. You can't survive, you can't support your family.”

Even with the new funding and resources, McCall said the quality of early childhood education has gone down over the years — the profession used to attract passionate educators who wanted to change the lives of children, but it has become more of a scramble to find people to fill shortages.

She also said the curriculum in Head Start programs is high-quality and focused on academics, but that there are many instances in which lesson plans are not correctly implemented because of high turnover and low interest in the field. There is also a need for more mental health services to manage behavior issues from today’s generation of children.

“You have more behaviors now and you have a lot more that you have to learn in order to be successful with children in these programs now,” she said. “Because again, the children that have extreme behaviors that families do not want support [for], have different things going on.”

Hall, on the other hand, said she is not worried about staffing problems. She said her “play-based” daycare will not require many employees, and she plans to charge a decent fee for her services, which include fun early learning activities, home-cooked meals and one-on-one nurturing.

Hall said the job is usually ideal for retirees and people living on Social Security or fixed incomes looking to supplement earnings because of the low pay.

“It just depends on what a person is looking for,” she said. “Some people are probably just looking for part-time [work].

The festering child care crisis across the nation came into greater focus in 2020 when businesses started to reopen from COVID-related shutdowns, and parents struggled to get back to work. This prompted state legislatures across the country to pass hundreds of child care bills using COVID-19 relief money that will run out in 2024.

According to Annette Dawson Owens, the school readiness policy director at Children’s Advocacy Alliance, Nevada lawmakers were focused on improving the state of child care prior to the COVID-19 outbreak, with a focus on closing the achievement gap among at-risk children. She said over the years, the mindset has shifted about child care both locally and nationally.

“It's early learning, not just babysitting,” Owens said. “It's high-quality child care because we know that those first years are so incremental, and [it] changes the trajectory for a child if they are prepared and ready to enter kindergarten with those high-quality early learning experiences.”

She said Nevada’s historically low ranking for education includes scoring based on the state’s investments in school readiness, like pre-kindergarten. Child care leaders were using the Quality Rating Improvement System (QRIS), similar to public school rating systems, to encourage daycares to be more academically focused, and Owens said officials saw great strides in Nevada prior to the pandemic.

“We have to move forward,” Owens said. “But the conversation, the awareness, the willingness, the understanding of [recent] investments, how they help the state of Nevada — I think that's where we've come a long way, in the mindset shift.”

Denise Cross, owner of Goddard School Preschool and Daycare of Somerset in Reno, said years of low rankings coupled with the pandemic created a perfect storm for child care in Nevada and caused more teachers to leave the workforce.

During the pandemic, with ARPA dollars, Cross was able to pay salaries and increase them without generating revenue. She also used pandemic emergency money to expand to a second location during that time.

She owns two centers in Reno and employs 41 teachers, with lead teachers earning between $20 - $22 an hour. Cross said the key to maintaining teachers is rooted in resources, work life balance and giving them time to create the kind of classroom that they want.

“So, I think this is probably for everybody, but in particular teachers … you have to invest in them or they're not going to stay,” she said.

Cross said she is constantly seeking new teachers because the business of child care is based on ratios. In Nevada, the ratio is one early education teacher for 13 kids, with the number of children per educator lower at younger ages.

Although Nevada lost about 30 percent of its child care capacity during the pandemic, Cross said she believes that teachers are starting to return to the teacher workforce based on an influx of applications she’s receiving.

“Having teachers leave the teaching or education world caused this lag in hiring, which then causes a lag in enrolling,” she said. “And now we have more children in the system that are looking for child care. We also had this huge boom in Nevada where so many people are coming into the state.”

Advocates said that while new child care funding is available, lawmakers should consider more creative ways to meet the demand, such as through child care micro centers, where providers have up to eight children. Under that arrangement, one director would oversee two micro child care centers and be required to work 25 hours per week at each center.

“It's called micro centers where we're trying to cut the cost of the director, because the director [is] obviously the most costly employee,” said Jamelle Nance, the Strong Start Prenatal-to-Three director for Children’s Advocacy Alliance. “We're really brainstorming, we're at the beginning phase.”

She said the concept is being used in other states and that the next phase of the idea would require assistance from a state consulting firm for strategy.

Nance said it’s imperative that leaders use the available funding to make working in child care more marketable and attractive to ensure recent investments are effective, because providers are finding it hard to expand. She said the biggest motivator for this should be to ensure children are prepared for school through early learning programs, not only academically, but also socially, emotionally and physically.

Other early learning experts said they want to see the state attract companies that have high-quality child care built into their business model.

“I think [Gov. Sisolak] could leverage ARPA funding, and the Governor's Office of Economic Development, to incentivize among [child care] employers increasing wages,” Garner said. “The question will be sustainability.”

Cross said “a good teacher is worth their weight in gold,” and that she will find a way to keep salaries where they are when the one-time federal funding runs out in 2024.

“We'll just have to figure out operationally how we're going to absorb that money as we move forward,” she said, “because losing good teachers won't be an option.”