The Indy Explains: How the state's K-12 funding formula works 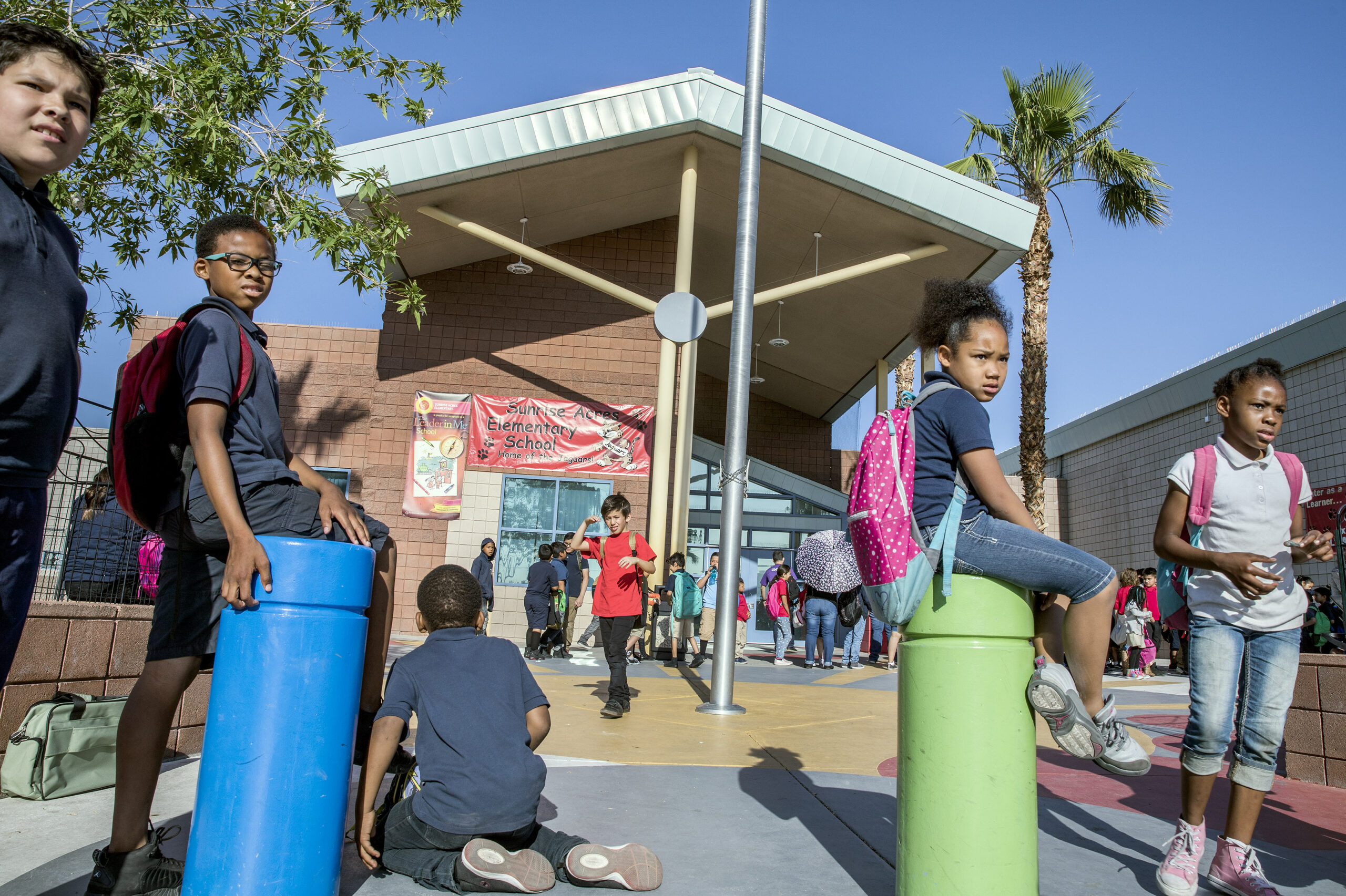 A massive bill designed to change the way Nevada funds public education is inching toward its much-anticipated public debut.

But those hoping for an equally massive injection of funding won’t see it in the proposed legislation. Sen. Mo Denis, who chairs the education committee and has been helping craft the bill, said it is a misconception he has been actively dispelling. Instead, he said the forthcoming legislation addresses a root problem by revamping the decades-old funding formula known as the Nevada Plan.

“People think that somehow by changing the funding formula, it’s going to change revenue, and it doesn’t do that,” he said. “This isn’t about how we pay for it. It’s about how we allocate the money we have.”

In other words, it’s less about the actual dollars and cents and more about how money — whatever the sum may be — flows from the state’s coffers to school districts, where it ultimately benefits students. If lawmakers approve the proposed legislation, it would set a roadmap for untangling the existing funding formula and implementing a more transparent method.

The effort has been years in the making. At its core is what many describe as a complicated and archaic mechanism for doling out the state’s education dollars that goes back a half-century. There’s broad consensus that it’s time for a reboot. What that looks like could lead to debate, though.

Before that conversation heads to the Legislature, here’s a primer on the current funding formula and how it may change moving forward.

What is the Nevada Plan?

The Nevada Plan is the name given to the funding formula that determines the base level of funding each year for school districts and charter schools across the state. That money is then doled out from the Distributive School Account, which includes state and local funding sources.

How does the current funding formula work?

School districts can use the local revenue from the second bucket however they please. The only caveat is that it’s considered “local wealth,” which factors into the funding formula.

The Nevada Plan relies on state officials determining something called the statewide average basic support per pupil. Yes, that’s a tongue-twister. Essentially, it’s the average money guaranteed to educate each child in Nevada. But it does not mean each district will receive that much money per pupil. More on that later.

During the budgeting process, school district expenses — everything from personnel to maintenance costs — are tallied along with inflation-related costs for medical benefits. Then, the projected local revenue “outside” the Nevada Plan is subtracted from those estimated expenses. That difference is then divided by the projected statewide enrollment to arrive at average basic support per pupil.

Gov. Steve Sisolak’s proposed budget calls for an average basic support of $6,052 per pupil in the first year of the upcoming biennium. But even if the Legislature approves his budget recommendation, that is not the end of the road in this process.

Here’s where it gets tricky: The statewide basic support is adjusted based on each school district’s characteristics.

Enter the Equity Allocation Model. This is a multi-tab Excel workbook containing the formula that generates the per-pupil amount for each district. The formula includes factors such as student enrollment, transportation expenses, local wealth, operational costs, salaries and benefits, and number of teachers.

When the Legislature-approved appropriation is plugged into the Equity Allocation Model, it redistributes the money based on those factors. That’s how school districts wind up with different guaranteed per-pupil amounts.

The 2017 Legislature approved a basic support of $5,897 per pupil for the 2017-2018 school year. That’s the statewide average. After the equity allocation, here’s what the guaranteed per-pupil support to each district came out to be:

Those amounts were adjusted slightly for the 2018-2019 school year based on revenue projections. The current basic support is $5,967 per pupil.

The wide variance between the per-pupil support for each district boils down to the unique cost of educating students in various parts of the state. Rural districts, for instance, have significantly higher transportation costs because of the distance between where children live and the schools they attend.

But there’s still one more hoop school districts have to jump through before receiving those per-pupil dollars.

Remember those buckets of local funding? Well, the first bucket — made up of the in-state Local School Support Tax and one-third of property taxes — is considered “inside” the Nevada Plan. It’s essentially the school districts’ contribution to the Distributive School Account and is paired with state funding. However, if a school district’s contribution is larger than its guaranteed per-pupil support — that figure generated by the Equity Allocation Model — it would not receive any DSA funds.

As for charter schools, their basic per-pupil support varies. The amount they receive is based on the school district in which their students reside.

If your head is spinning, don’t worry. You’re not alone. The complicated nature of the funding formula is one reason why there’s an effort underway to revamp it. After all, a document labeled as an “overview” of the Nevada Plan and distributed during the 2017 legislative session was 20 pages in length.

What’s the beef with the Nevada Plan?

Aside from the Nevada Plan being complicated — and, therefore, not very transparent — critics argue that it doesn’t adequately meet the needs of today’s students. Nevada’s population was much smaller and less diverse when it was crafted in 1967.

The basic per-pupil support doesn’t take into account what it takes to educate certain student subgroups, such as children learning English as a second language (“English Language Learners”) or those coming from low-income households. Students with disabilities also aren’t factored into the basic per-pupil support. State special-education funds come as a separate appropriation from the Distributive School Account.

Fund Our Future Nevada, a grassroots-powered coalition that wants to see the funding formula modernized, notes on its advocacy site that the Nevada Plan doesn’t reflect various state and federal education mandates, which have increased school costs.

The funding formula also faces criticism for relying too much on historical spending versus the actual cost of educating students.

But what about categorical funding?

The guaranteed basic support determined by the Nevada Plan does not reflect actual expenditures per student. That’s a common misconception. It’s simply the base funding, albeit a very significant portion of school district budgets. The base funding, on average, makes up about 80 percent of districts’ general fund revenue.

Districts also have the local revenue that’s “outside” the Nevada Plan to use at their discretion.

Some other money comes in the form of categorical funding, which target specific student populations and can come from state, federal or private sources. School districts must use categorical funding for its intended purpose. Zoom and Victory schools — which receive extra state funding for English Language Learners and students from low-income households, respectively — are perhaps the most well-known examples of state categorical funding. Lawmakers allocated $100 million to Zoom Schools and $50 million to Victory Schools for the 2017-2019 biennium.

Programs such as Read by Grade 3, Nevada Ready 21 and the school social worker initiative are other state categorical funds.

Examples of federal categorical funds include the National School Lunch program, grants tied to the Individuals with Disabilities Education Act, and Title I money, which helps schools serving larger populations of disadvantaged students.

Former Gov. Brian Sandoval’s signature education reforms relied heavily on categorical funds. Some viewed the creation of Zoom and Victory schools, for instance, as a test to see whether additional money distributed in a prescriptive manner could boost student achievement. An external audit of those programs released earlier this year indicated that the categorical funds were bearing fruit within schools.

But they haven’t been without controversy. Critics say Zoom and Victory funds only help students who happen to attend one of those designated schools. Every student with unique needs, they argue, should receive extra supports regardless of what school they attend.

That’s why there is a push toward implementing a funding formula that includes weights. Gov. Steve Sisolak, who took office in January, has said he doesn’t want the state to rely as much on categorical funds in the future. Intead, he wants to see the state move toward weighted funding.

What is weighted funding?

Weighted funding directs more dollars to students who have extra needs. It essentially recognizes that because no two children are the same, they cost different amounts to educate. Simply put, some need more services or supports to achieve on par with their peers.

Pre-set weights determine how much extra funding certain groups of students — such as English language learners, students from low-income households and special-education students — would receive on top of the base per-pupil funding.

The Legislature already has started down this path. In 2015, state lawmakers passed Senate Bill 508, which called for implementing a weights by fiscal year 2022. The problem has always been money. By some estimates, fully implementing weights would cost more than $1.2 billion — meaning it’s not something that can be turned on like a lightswitch.

So lawmakers decided to take some baby steps during the 2017 legislative session. They passed Senate Bill 178, which directed an extra $1,200 each to students performing in the bottom quartile on state standardized tests. Sisolak’s proposed budget aims to expand those weights by allotting $70 million — up from $36 million — for that purpose, which would serve an additional 28,281 students in any school.

Right now this all operates outside of the Nevada Plan, which as explained earlier, determines the base funding for each district.

Democratic Sen. Mo Denis said the forthcoming education bill will be “student-centered” and based on the cost of educating students. Weighted funding, he said, must be a part of the consideration.

A 2018 study commissioned by the Legislature offers a variety of recommendations. The report identifies $9,238 per student — considerably higher than the current $5,967 — as a good base funding target over time. Given the steep incline, the study team also included an alternative, more modest proposal of $5,988 per student, based on an examination of successful schools in Nevada, as a starting point.

The report suggested the state adopt the following weights: .30 for students who come from low-income households; .50 for students learning English; and 1.1 for special-education students.

If Nevada eventually reached a base funding amount of $9,238 per student, that means the weights — or additional money — would be $2,771 for at-risk students, $4,619 for English language learners and $10,162 for special-education students.

Time will tell what Nevada’s school finance future looks like. And as the old saying goes, the devil will be in the details. But Denis said he’s confident the Legislature will pass a bill overhauling the state’s education funding formula this session. Then a transition period will likely follow.

“It would be very difficult to implement it this year — just because the budgets have already been done,” Denis said. “I would anticipate that we’ll have a path for how to implement and when different pieces have to happen.”