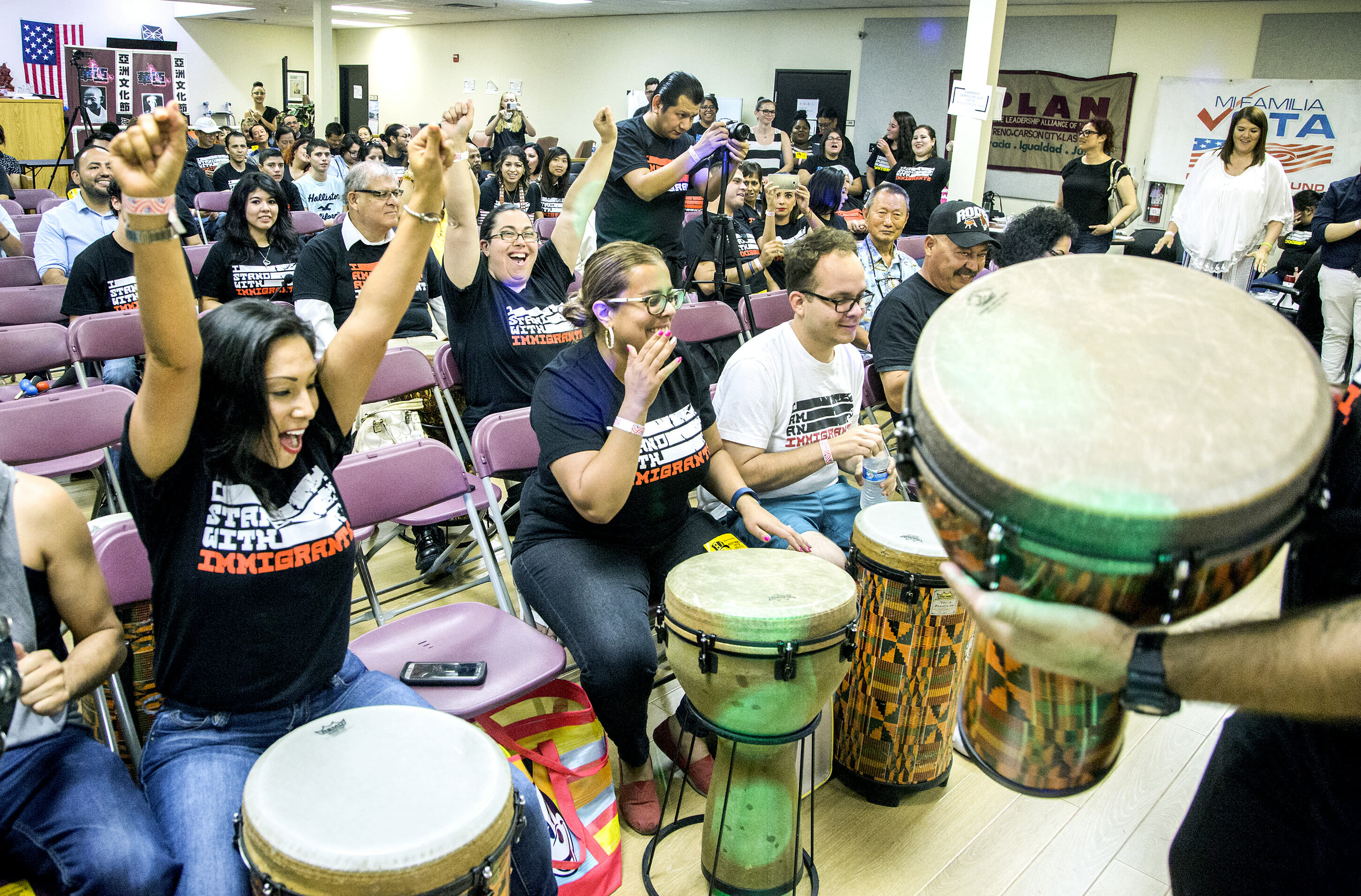 Democrats and immigrant groups are crying foul and warning that the Commerce Department’s decision to include a question about citizenship as part of the 2020 census would have a “chilling effect” on minority communities and hurt the state budget going forward.

The department announced on Monday that it would include a citizenship question on the 2020 census, acting on behalf of a 2017 request by the Department of Justice and despite criticism that inclusion of the question could result in a census undercount and resulting reduction in federal aid and representation for states with high populations of undocumented immigrants. Nevada, which has the highest proportion of undocumented residents of any state in the country at an estimated 7.6 percent, could be particularly hard-hit.

“If we’re not counted, we’re invisible,” said Ben Monterroso, executive director of the advocacy group Mi Familia Vota. “And if we’re invisible, our issues are not being taken into account, and I think that is precisely what this racist administration is trying to do with that question.”

“What’s going to happen if in my house, I’m a citizen but I have somebody who is my brother or my sister who happens not to have documents?” Monterroso said. “If I give that information, are they going to come after my family, or not? Should I be better off not saying anything? That is the confusion this will create, and that confusion will detrimentally impact out community because our community is one of those communities that’s hard to count.”

An undercount, in turn, could throw off the baseline data set used by federal and state governments.

“If we have a bad census, that means that the work I do for state, including distributing revenue back to cities and towns, will be less accurate,” State Demographer Jeff Hardcastle said.

To underline the risks associated with undercounting populations, Hardcastle pointed to a 2015 study in George Washington University that found the top 16 federal assistance programs based on census data gave Nevada an average of $1,611 per individual.

In addition to the high proportion of state residents who are in the country illegally, one in five Nevada residents was born in another country. Although several Republicans, including President Trump, have expressed support for including the question, Nevada Gov. Brian Sandoval said he was concerned with how it would affect minority communities.

“Over the years, the census has helped our country apportion seats in the U.S. House of Representatives and served as an important tool for the determination of some federal funds,” the Republican governor said in a statement. “I am concerned about the impact a citizenship question would have on the ability of the 2020 census to identify minority and underserved populations and how that may impact our state in the future.”

Basis for the change

The U.S. Constitution requires the federal government to take a census of the population every 10-year period, in order to apportion seats in the House of Representatives. The data is also used in determining how to distribute more than $675 billion in funds for federal programs — everything from food stamps to Head Start to Pell Grants — and is used in drawing congressional districts.

In a Dec. 17, 2017 letter to Ron Jarmin of the Census Bureau — first reported by ProPublica — a Justice Department official asked for the inclusion of a citizenship question on the 2020 census. Reinstating the citizenship question, wrote the Justice Department official, was crucial in enforcing Section 2 of the 1965 Voting Rights Act, which protects against racial and language discrimination.

Section 2 prohibits voting redistricting if it improperly dilutes any minorities’ voting power. Adding the census question, said the official, ensured non-citizens would not negate the voting power of citizens.

The Census Bureau included a citizenship question on its long-form questionnaire — which is mailed to a small group of census participants — since 1970, but it was discontinued in 2010. It’s replacement was the American Community Survey (ACS) which was sent to an even smaller subset — one in every 38th household and included questions regarding citizenship and place of birth.

The Commerce Department, which oversees the Census Bureau, mentioned the ACS survey in its rationale for including the citizenship question, adding that it had been included in previous census studies in the early part of the 20th century.

But many experts have warned that including questions on citizenship could discourage undocumented or legal immigrants from answering census questionnaires, which would artificially deflate the population of states with large immigrant communities and throw off demographic data that the state and federal government use to make decisions on where to spend resources.

Vanita Gupta, president for the Civil and Human Rights Coalition and former chief government enforcer of the Voting Rights Act, said in a letter to Ross that there had never been a need to ask a citizenship question on the census to enforce any provisions under the Voting Rights Act.

“The Justice Department has never needed to add this new question to the decennial census to enforce the Voting Rights Act before, so there is no reason it would need to do so now,” Gupta said.

In an amici curiae brief filed in a 2016 federal apportionment case, four former census directors — who served under Republican and Democratic presidents — wrote that the “net effect” of adding a citizenship question would be “bad census data.”

“There would be little incentive for non-citizens to offer to the government their actual status; the result would be a reduced rate of response overall and an increase in inaccurate responses,” they wrote. “Both would frustrate the actual express obligation the Constitution imposes on the U.S. Census Bureau to obtain a count of the whole number of persons in order to apportion House of Representatives seats among the states.”

Although it’s impossible to actually estimate how many people would avoid responding to the 2020 census if it has a citizenship question, many experts predict that it will lead to an undercount of immigrant-heavy states, including Nevada.

“If the citizenship question is placed on the U.S. Census, it could have adverse effects on federal funding in Nevada,” said Meredith Levine, economic policy director for the Guinn Center for Policy Priorities. “Should that be the case, we would expect a negative impact on the state budget.”

The Guinn Center estimates that federal funds constituted 33.1 percent of Nevada's budget in the 2017 fiscal year, with a large percentage comprised of federal grant money.

“Given that federal funding relies on accurate population counts to distribute money, an undercount would mean fewer federal dollars for the state,” Levine said. “This would shift the budgetary burden to the General Fund, which relies heavily on the State Sales Tax. That tax tends to fluctuate in accordance with the economy, so if there were an economic downturn, the reduction in federal funding could be considerably damaging to the budget.”

Connie Lucido, administrator of the state’s Office of Grant Procurement Coordination & Management, reiterated that the federal government uses census data to identify community needs and that any factors affecting an accurate count could result in lower federal funding levels.

“Underrepresented census is always a concern and can reduce federal funding,” she said in an email. “It is important to the Office of Grant Management that all populations in Nevada are appropriately represented in order to ensure accurate federal funding.”

Levine said Latinos have previously been undercounted in the census because potential respondents without documentation feared that the question would allow federal authorities to locate them and lead to potential deportation.

Before Ross sought to reinstate the citizenship question, the Census Bureau campaigned in Spanish-language media to assuage deportation fears and encourage all Latinos to ensure representation through participation.

“The citizenship question, however, underscores these anxieties by institutionalizing the response and providing an official mechanism to identify residents without documentation,” Levine said.

Even so, the 2010 Census missed more than 1.5 million minorities, including 2.1 percent of black Americans and 1.5 percent of Hispanics, according to the Census Bureau’s self-assessment of its counting procedures.

“School districts are currently struggling to address the needs of special education and under-resourced students,” said Brune. “A decrease in federal funding could challenge the state's need to serve our students who need additional resources.”

Democrats in Nevada’s congressional delegation were quick to decry the decision to include a citizenship question as part of the Census.

In a statement, Democratic Sen. Catherine Cortez Masto — who voted to confirm Ross as Commerce Secretary in 2017 — said she was “alarmed” that the department was “politicizing” the census, and said she would support legislation prohibiting the census from including questions related to citizenship.

“This decision trades the accuracy of a census designed to provide complete count of the entire nation’s population for a political win for President Trump,” she said in a statement. “This is a direct attack on immigrant populations that could lead to undercounted and underfunded minority districts across the country.”

Likewise, Democratic Rep. Ruben Kihuen said inclusion of the question would have an “adverse impact” and said it was another attack by the Trump administration against immigrants.

“Including a citizenship question on the census will only serve to further intimidate immigrants and cause many to avoid the census altogether,” Kihuen said in a statement. “It will add confusion and erode overall confidence in what has previously been an unbiased method for accurately measuring our population.”

“The Administration’s latest proposal to include an immigration status question in the 2020 census politicizes the census and drags its integrity into question,” she said in a statement. “It’s clear that the Trump Administration is looking to ensure Nevada’s immigrant communities are underserved and underrepresented for the next decade. I plan to work with my colleagues in Congress to protect the 2020 census from this misguided effort to use it as a tool to discriminate.”

Rosen has signed on to a Democratic bill introduced last week that would prohibit any questions from being included on the census questionnaire that were not submitted to Congress three years prior to census day.

She also backs a bill that would would establish a task force to review new decennial census questions and their impact on response rates for minorities.

Representatives for Sen. Dean Heller and Reps. Mark Amodei and Dina Titus did not return requests for comment on Tuesday.

Although the White House has yet to respond to the department’s proposed change, President Donald Trump’s campaign hinted at the change in an email sent to supporters last week, including a survey asking if they supported the president’s desire to ask about citizenship on the census.

“The President wants to know if you’re on his side,” it said. “Do you believe the 2020 United States Census should ask if people are American citizens?”

Humberto Sanchez and Michelle Rindels contributed to this story.