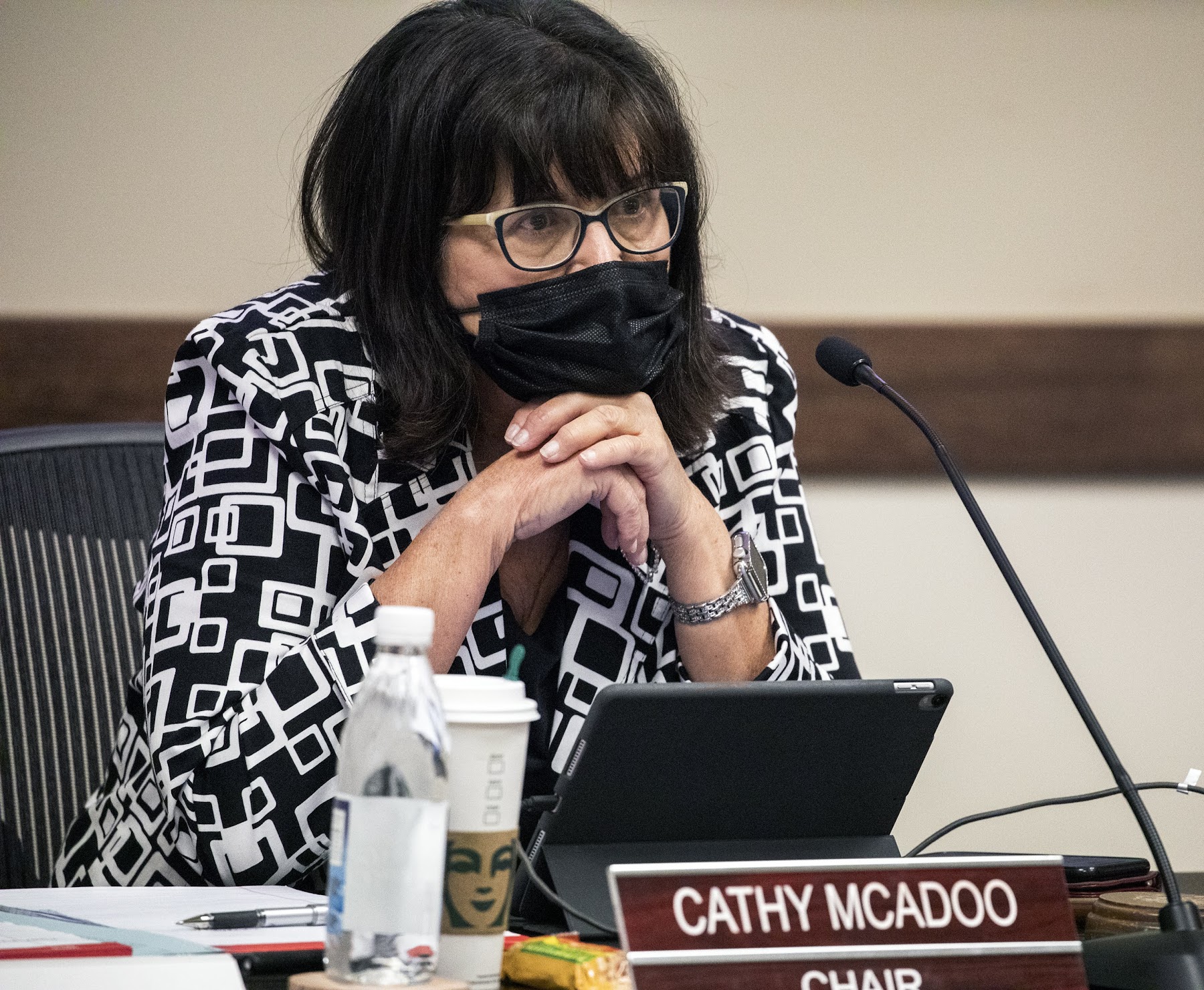 One month after they were named in a hostile work environment complaint, Board Chair Cathy McAdoo and Vice Chair Patrick Carter signaled Friday that they will temporarily step aside as board leaders during the outside investigation into the higher education system chancellor’s claims.

A source with knowledge of the situation confirmed to The Nevada Independent the leaders’ internal announcement and the scheduling of a special meeting on Nov. 12. It will be the board’s first public meeting since publication of the chancellor’s allegations.

McAdoo and Carter did not immediately respond to requests for comment. The resignations were first reported early Friday by the Las Vegas Sun.

Though McAdoo and Carter will retain their seats on the 13-member board, which regents might emerge as leaders in the interim is unclear.

An agenda for that meeting posted late Friday afternoon included a single action item to elect "officers pro tempore" in accordance with the decision by McAdoo and Carter to "temporarily relinquish" their leadership roles.

The agenda item also notes specifically that the newly elected leaders will serve "through the duration" of the investigation, and in "no event" serve any later than Jun 30, 2022.

The board’s bylaws do not explicitly define guidelines for the removal or replacement of board leaders, instead providing only that in the “absence or inability to act” of both chair and vice chair, a regent designated by the chair may step in to run a meeting as a “presiding officer pro tempore.”

However, Regents may also move to select a new chair and vice chair under bylaws governing vacant leadership positions, which would allow the board to vote for new leaders. Per Friday's agenda, that election will occur next week.

With both leaders stepping down, Regent Jason Geddes, a former Board chair and the most senior regent on the board, is expected to preside over Friday's meeting.

In her complaint filed early last month, Chancellor Melody Rose accused McAdoo and Carter of abusing their power, violating the board’s code and working to minimize her influence in an attempt to force her out of her position. Few regents have commented publicly on the matter, as an investigation by an outside law firm continues to probe the chancellor’s allegations.

In a joint statement issued one week after the complaint became public, McAdoo and Carter said only that the board “takes all complaints seriously and is committed to having a thorough investigation conducted.”

But at least one regent, John T. Moran, publicly called for McAdoo and Carter to step down. Explaining his stance to The Nevada Independent last month, Moran said he made the call in part to “avoid the appearance of impropriety” and out of an “abundance of caution” for the board.

In the weeks since, the Nevada System of Higher Education’s inner workings have outwardly slowed to a crawl or been delayed altogether, as three interim board or committee meetings have since been canceled or postponed indefinitely.

Before the announcement of the Nov. 12 meeting, regents had not been set to meet before a regularly scheduled quarterly meeting on Dec. 2 and 3.

Among items included in those canceled meetings were decisions on a new special counsel and chief of staff for the board. On Wednesday, Carter confirmed that he would step down as the search committee chair for the special counsel search, and said he recommended canceling the search and hiring a third-party search firm.

The contents of that complaint remain unknown, but sources confirmed that the document does not name specific regents.

Update: Nov. 5, 2021. This article was updated to include new details of a regents' meeting agenda posted late Friday afternoon.

Update: Nov. 6, 2021. This article was updated to clarify that Regent Jason Geddes will preside over the 11/12 regents meeting.