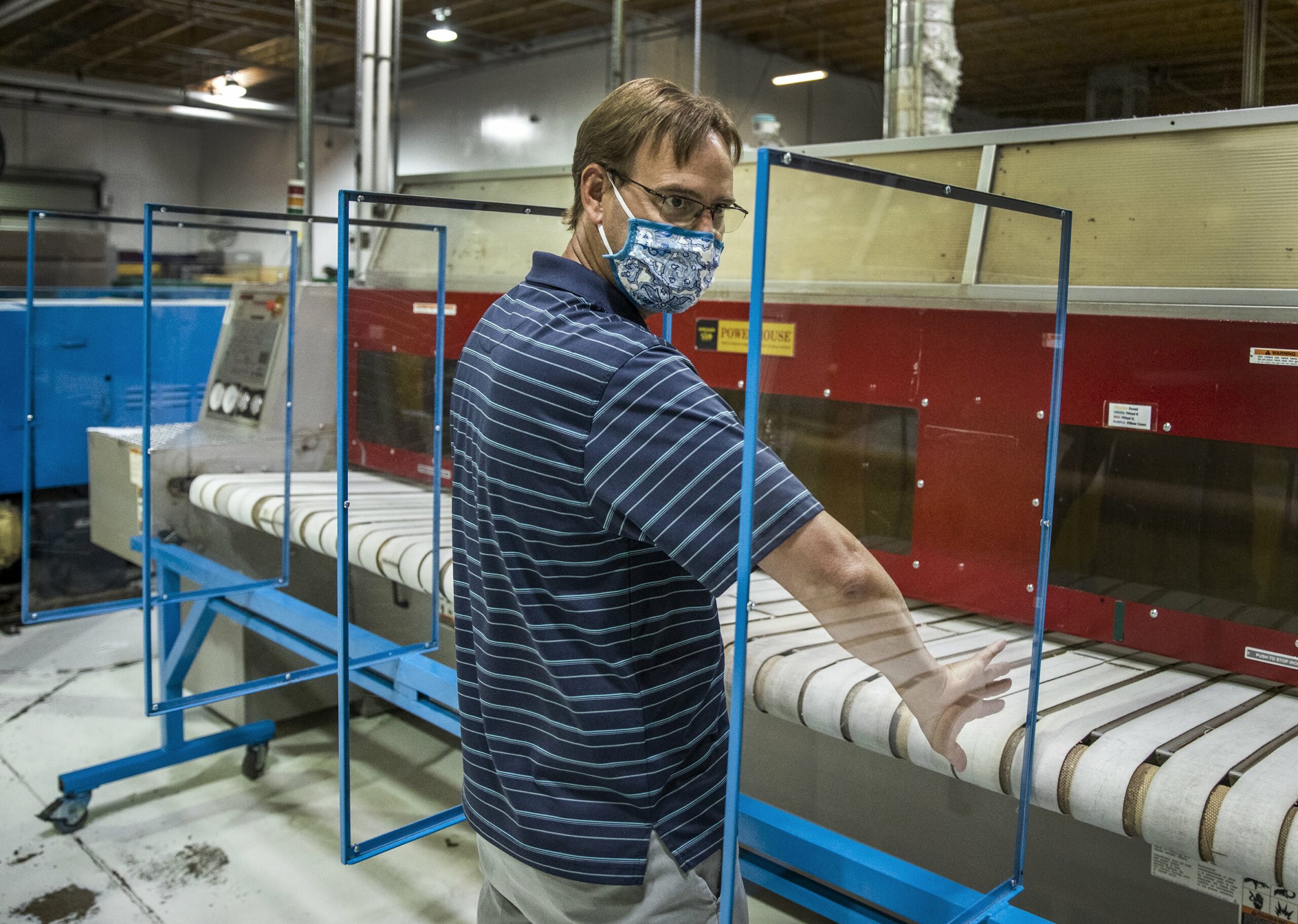 When the Las Vegas Strip became a ghost town of padlocked casinos, the shockwaves reverberated well beyond the famed boulevard in this tourism-dependent town.

Artisanal Foods, a distributor of gourmet delicacies, wound up with $6,000 worth of anchovies on hand and no restaurants open.

And Everything Entertainment, Inc. saw its event bookings crumble almost overnight, leaving a warehouse full of costumes, props and a 9-foot-tall robot sitting lonely for the foreseeable future.

For businesses that rely on a steady stream of visitors — 42 million last year — the coronavirus-induced closures brought a grim new meaning to the city’s most famous tourism slogan: “What happens in Vegas stays in Vegas.” It wasn’t just gaming companies, airlines or hotel brands with global footprints experiencing an abrupt reverse in fortune. Ancillary businesses, many either based or with a heavy presence in Las Vegas, were instantly paralyzed by the pandemic. They’re the companies that play a critical yet often behind-the-scenes role keeping the gambling mecca functioning.

“We’re at a standstill and we’re dying,” said Constanza Areizaga, vice president of Everything Entertainment, Inc., which she started in 2001. “I don’t know what we’re going to do. It’s horrible.”

Despite Gov. Steve Sisolak eyeing a June 4 reopening date for casinos, the reality is this: They won’t all open their doors at once, nor will visitors return in droves right off the bat.

The climb back to anything that resembles pre-pandemic levels of activity could take 18 months to two years, said John Restrepo, an economist and principal of RCG Economics. And, even then, the resort and gaming industry will likely look different as companies innovate and turn toward automation in the aftermath of COVID-19.

“Whoever says that, ‘Well, in a couple years, we’ll go back to 2019,’ is fooling themselves at this point, I think,” he said. “I don’t hear any of that from even the most exuberant cheerleaders in this town.”

The elongated recovery isn’t lost on businesses tied to casino properties on and off the Strip. Here are three of their stories:

At the beginning of this year, Areizaga and her husband, Guillermo, were contemplating whether to hire more full-time staff members.

Their event production company — Everything Entertainment, Inc. — was busier than ever, putting on roughly 25 large corporate events each month as well as 25 smaller ones such as birthday parties or weddings. Once that meant orchestrating a grand entrance for a chief executive officer who wanted to ride into a company meeting atop an elephant. Another company requested a “Hunger Games”-themed soiree complete with elaborate costumes, decorations and an interactive deejay. And many events involved showgirls, acrobats, magicians or musicians, all of whom worked as independent contractors. The company itself had four full-time employees.

Then came the coronavirus and a foreboding feeling.

Soon, 75 events had been canceled through the end of the calendar year.

While the immediate future remains murky for conventions and trade shows, even smaller get-togethers are largely on hiatus. Milestone festivities like baby showers or bachelor parties have been modified, postponed or outright canceled. The governor has not lifted a restriction that limits gatherings to 10 or fewer people.

The company weathered the Great Recession, but it came with a steep personal cost: downsizing, chewing through savings and racking up credit card debt. Now, Areizaga worries this financial rough patch could be even thornier. She knows tourism — driven by discretionary spending and business travel — won’t bounce back with the reopening.

Everything Entertainment’s monthly overhead for necessities like warehouse rent, utilities and insurance payments runs north of $8,000, she said. That doesn’t include salaries, which have been frozen.

Guillermo Areizaga, the company’s president, stood in one of their warehouses Thursday afternoon and looked at the unused costumes and props surrounding him. (The company has a presence in Orange County, California, and Mexico City as well.)

Reinvention will be key for the company moving forward, he said. Showgirls, a quintessential piece of the Las Vegas brand, may no longer attract the hordes of tourists seeking photos. But maybe, Guillermo Areizaga wonders, they’d want that photo from a safe distance or with certain health protections in place.

“We need to transform the showgirls,” he said. “We need to create something special so the client feels more comfortable, but the photo is going to look different.”

With one era potentially gone and an uncertain new one beginning, he still expressed optimism about the company’s future.

It’s a phrase uttered in hospitality circles or public meetings in Las Vegas, home to the United States’ highest concentration of hotel rooms. Industry jargon for visitor volume, the metric drives everything from corporate profits to tax revenue.

But it also denotes a more practical reality: laundry and lots of it.

Before the pandemic, Brady Linen Services, a laundry provider under the parent company of PureStar, washed hundreds of thousands of pounds of laundry each day. Most of it came from casinos and their attached resorts. Then the tourism corridor came to a grinding halt and so did its output of dirty laundry. The company lost about 85 percent to 90 percent of its business, said Alex Dixon, president of the west region of PureStar.

“We are as tightly woven with that industry, so their success is our success,” he said, “Our job is to help make them shine and help make them look good.”

The company has five standalone plants in Las Vegas as well as ones in the Venetian and Wynn casinos. Only one standalone plant has been operating during the coronavirus shutdown, servicing laundry mostly from hotels that remained open and non-hospital health care clients. As a result, the company furloughed the vast majority of its 1,200-employee workforce.

“It’s been, as you can imagine, heart-wrenching,” Dixon said.

But the quiet weeks have given rise to a new task: creating social distancing and safety precautions at the plants. Plexiglass partitions, for instance, have been installed where workers stand next to machines that help spread and iron laundry.  Employees are also required to wear face masks and keep six feet apart from each other.

The one plant left open washed about 56,000 pounds of laundry per day before the shutdown. Now, it’s doing about 10,000 pounds a day.

The company’s leaders don’t expect a swift return to that capacity, but as casinos move toward unlocking their doors, laundry service will creep back to life, too.

“The Strip hums from this entire ecosystem that kind of fades into the background,” Dixon said. “In many ways, you’ll start to see that hum before the people come back.”

Lily Rodriguez, general manager of Artisanal Foods, formed a temporary business plan on the fly. The inventory on her shelves couldn’t ride out the shutdown.

The company distributes unique and high-end food, sourced from around the world, to restaurants up and down Las Vegas Boulevard. Black truffle butter? Kaluga caviar? Wagyu beef? Dried barberries? Artisanal Food supplies it.

Strip restaurants accounted for 90 percent of the company’s business, she said, but Artisanal Foods also has a small storefront. Faced with watching perishable items go to waste or hatching a plan, Rodriguez chose the latter. She repackaged large quantities of food, such as anchovies, into smaller containers and slapped on arbitrary cheaper prices: $2.99. $4.99. Whatever might entice a customer. This was far from a get-rich-quick scheme.

Under normal circumstances, the food would command much higher prices. But Rodriguez said she at least wanted it to find a home.

“We don’t know how long it’s going to be, and people need food,” she said, explaining the rationale.

Much to her surprise, Artisanal Food’s storefront suddenly saw a steady stream of customers. Many were older people, she said, who feared entering large grocery stores. After several customers asked about toilet paper, Rodriguez threw some extra rolls on the shelf. She also printed recipes to hand out with the more obscure food items, such as black garbanzos. And she opened Artisanal Foods’ shelves to would-be competitors who needed to offload inventory — whether it be beans, rice, pasta or something more elaborate.

Watching the community come together, she said, was an unexpected gift during the difficult time.

“I’m just very grateful because we’ve seen a lot of chefs coming here to support us,” she said. “So many of our neighbors came to the store constantly.”

Still, Rodriguez didn’t gloss over the financial hardships ahead. Artisanal Foods expects its revenue to be down 50 percent through the remainder of the year. Knowing her restaurant clients are in a similar position, she has been making phone calls and sending emails asking them this question: “What can we bring for you to start supporting you?”

As the Strip gradually emerges from its virus-forced slumber, Artisanal Foods’ business will inevitably pick up, Rodriguez said. There was already a recent glimmer of hope — orders for specialty vinegars from two local casinos.