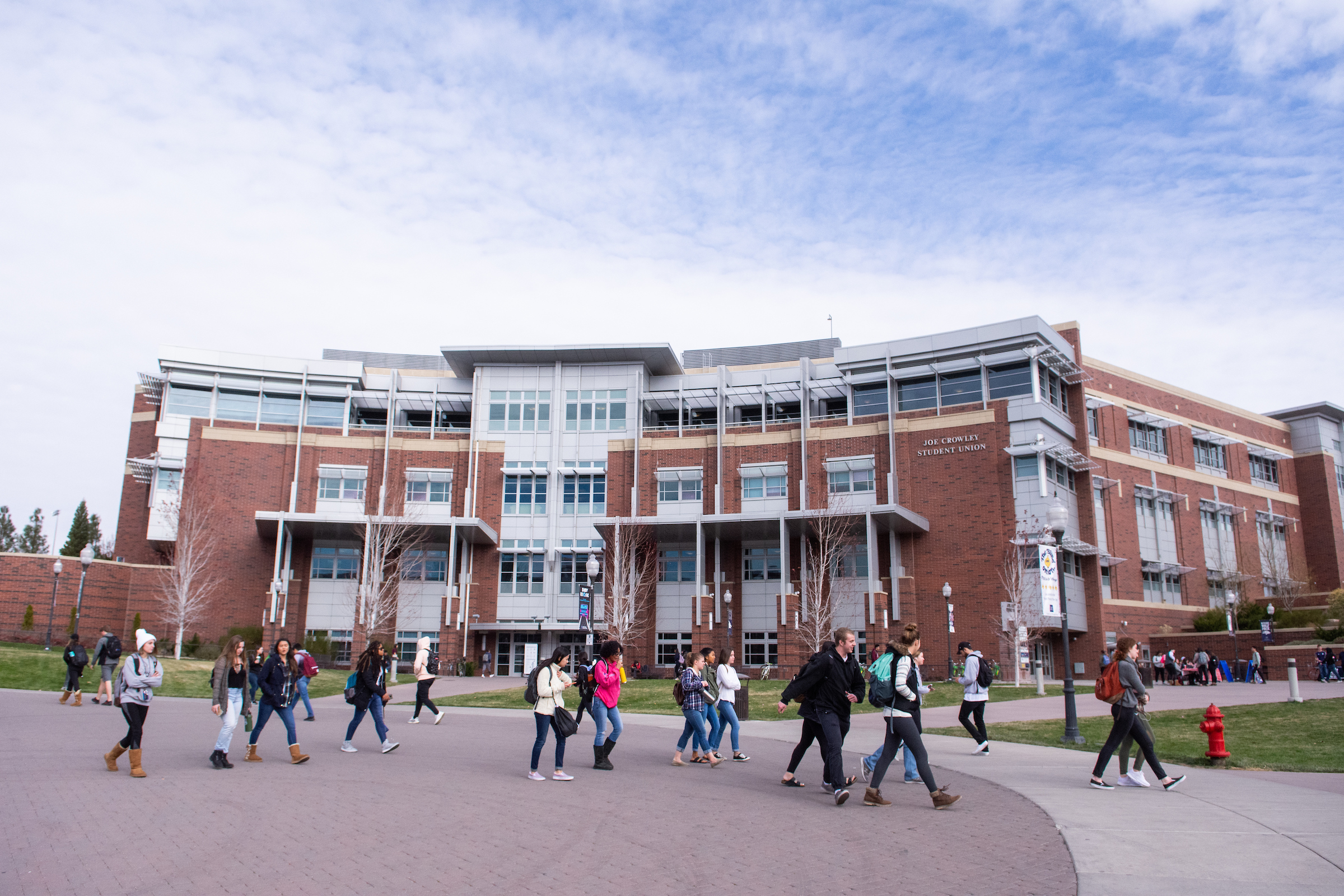 In the three months between the announcement of the final rules in May and the deadline to implement them this week, colleges, universities and higher education systems across the country have rushed to make the most substantial change to Title IX in decades amid the crushing weight of the coronavirus pandemic and the rippling crises that have followed in its wake.

In Nevada specifically, the publication of the new rules in early May coincided with discussions by regents over how to cut more than $100 million from the budget as state officials watched revenues crater. Just weeks later, regents approved a measure that would allow system-wide furloughs, at the time only the latest drastic measure implemented to stem a money problem that grew worse by the week.

Across the country, higher education institutions decried the timing. Calling the rules “enormously complex and burdensome,” the American Council on Education called for a delay in March. In Nevada, some higher education officials described the timeline as “unprecedented.”

Regent Lisa Levine, who was appointed to the board earlier this year, lamented the fact that the changes were presented with so little time before the deadline to implement them.

“That's just totally unacceptable,” Levine said. “This is not good public policy making, if that's how it's going to be done. I think a much better way is to have it earlier on so that the public could have addressed it with NSHE, and so that regents could have learned more, instead of giving us 30 minutes on the itemized agenda a week before you had to put it forward.”

Still, not everyone in the higher ed system feels as though the process was overly rushed. Regent Patrick Carter, who chairs the board’s Audit, Compliance and Title IX committee, told The Nevada Independent that he had “plenty of time” to review the changes in committee and send those changes back to the full board for a vote.

“It did seemingly take a little bit longer than I anticipated,” Carter said. “I had anticipated it being done in July, which would have given us a handful more weeks, but that workgroup just needed the time. It's an incredibly complex piece of legislation, as far as the amount of changes that it has in policy.”

In short, the changes make a host of key adjustments to due process rules used in the investigation of sexual harassment or other misconduct at publicly funded universities. Most notable among the changes is a new requirement that investigations include a live hearing complete with cross-examination, as well as adjudication of the matter by an “adviser.”

According to Maria Doucettperry, the Title IX coordinator at UNR, those new definitions could severely restrict the jurisdiction of UNR, where just 3,500 of more than 22,000 students live on campus during a normal academic year.

“So what's happened, by this definition, is that knocks out a lot of the conduct that we see on a daily basis, or things that happen at private homes or in an apartment between two students,” Doucettperry said. “And now none of that would fall within that Title IX definition, or very little of it, as we have so few students on campus.”

Proponents of the new rules have argued they were a necessary adjustment from Obama-era rules that were too quick to punish those falsely accused of sexual misconduct. In an initial unveiling of the formal process to change Title IX in 2017, DeVos told a crowd at George Mason University that the rules had “clearly pushed schools to overreach.”

For DeVos and other critics of the Obama-era rules, allegations of low evidence standards, inconsistent application of the rules and a widespread lack of due process spurred the eventual years-long process of combing through Title IX and, in DeVos' own words, “reframing” what it does in cases of sexual harassment.

Opponents, meanwhile, have charged that the changes will produce a chilling effect that will drive down the reporting of misconduct by raising unnecessary barriers and risking retraumatization in the process.

Still, even after years of vigorous opposition in the public sphere, the newly released rules lived largely in obscurity following their long-awaited release in May.

That all changed this month, when an Aug. 14 deadline to implement the changes loomed. If any system or institution failed to make the changes, the Education Department guidelines made clear that millions in federal funding could be on the line.

Questions came to a head for the first time in public on Aug. 7, during a special meeting of the Board of Regents. With just a week left before the federal government’s deadline, the swift passage of the new guidance was all but assured.

Still, many of the 13 regents raised a raft of questions and criticisms of the new rules, with one, Levine, going so far as to actively urge the board to vote down the item.

“Bad laws are meant to be broken,” Levine said. “As policymakers, we have the power to halt this terrible and harmful law. I caution those who vote yes on this as you will be standing on the side of rapists, by criminals and assaulters. I'm voting on behalf of survivors and all victims of sexual violence.”

Speaking later to The Nevada Independent, Levine said the board should be “in the business of protecting students” and warned that the implementation of the rules would spawn a chilling effect at Nevada colleges and universities.

Amid those criticisms, some administrators have pointed to alternative pathways for victims seeking justice through Title IX that doesn’t meet the new standards for investigations, something Doucettperry described as “one policy, two processes.”

“What would happen within our campus is it would then be looked at or viewed under that second process,” Doucettperry said. “And so for us, it may be hard to tell whether or not it truly has a chilling effect because there is a second process that kind of captures that conduct.”

In voting yes for the measure, some regents praised the addition of that secondary process as they made clear that, in their view, there was no way for NSHE to not comply with federal law without risking hundreds of millions in funding.

For Carter, providing a concrete interpretation of the new rules from the system-level would also form a key step in ensuring compliance at the institutional level.

“The urgency is really just in establishing, here's how we interpreted it as a system, here's how we're going to do it, and now it's in policy,” Carter said. “It's very clear, it's auditable, so we can make sure that we're following procedures internally. So if the [Department of Education’s] Office of the Civil Rights contacts our system, our chief internal auditor, or Chancellor or attorney — anybody — can say, well, here's our interpretation of how we're how we're doing this.”

But even as it became clear the measure would pass amid the looming funding threats — regents eventually approved the measure 10-3 — some board members raised yet more questions about the timing, pushing system General Counsel Joe Reynolds to explain why NSHE did not push to sue the Education Department or join one of several existing suits aiming at stopping the changes.

Those questions eventually prompted an unusual step by Attorney General Aaron Ford who called into the meeting to explain why his office never took steps to join 17 other states in suing the federal government over Title IX.

Though his office, in theory, would be able to take action without the approval of regents, he told the board that standard practice was to reach out to interested parties. And, in reaching out to NSHE, Ford said his office “didn’t receive a definitive response.”

“Frankly, given NSHE’s previous comment letter, which outlined a much more moderate position than taken in the multi-state lawsuit, and given the lack of attentive response and interest in joining the lawsuit, as well as the lack of information available at the time to include it in the declaration, we were unable to join the lawsuit,” Ford said.

Board Chair Mark Doubrava and system Chancellor Thom Reilly later sent a letter to Ford expressing explicit support for a lawsuit challenging the rules changes, and the board is expected to take a formal vote on litigation at a meeting on Aug. 21.

Meanwhile, a number of other lawsuits looking to halt the rules appeared to have stalled. That includes the multistate suit mentioned by Ford, which had a request for an injunction blocked in a D.C. circuit court. In denying the request for an injunction, the judge in the case said plaintiffs could not prove they would suffer “substantial, irreparable harm” if the rules went into place pending ongoing litigation.

With no intervention from the courts and the federal deadline officially passed, the burden falls to the institutions that must administer the new rules, all under the added pressure of an ongoing pandemic.

For Doucettperry, the biggest hurdle remains an informational one. Making sure the new rules are followed, she said, is one thing. But ensuring victims know about all their options — especially amid scattered media coverage of the new rules — is another entirely.

“I think initially, it's going to be confusing,” Doucettperry said. “I think that's just the honest answer, because everyone's heard, it's all in the news, ‘Title IX changed’ … and so everybody's up in arms, and that's what has people's attention. And I think even at that meeting at the Board of Regents meeting, I think it was missed by many that hey, that's not the end of the story.”