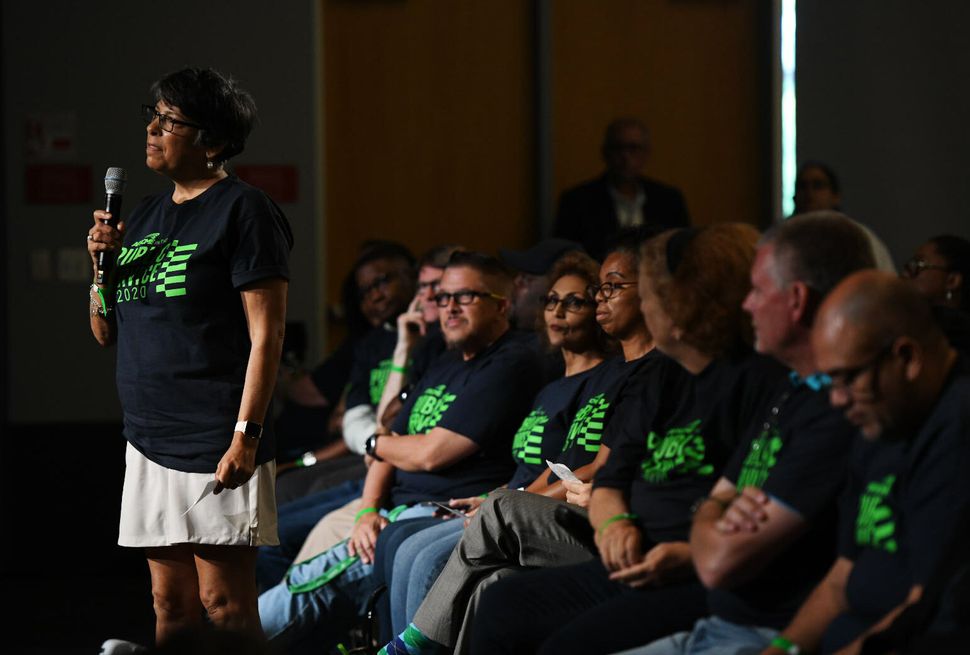 Union workers and their health plans became the latest proxy at a labor forum in Las Vegas on Saturday for a debate that has unfolded in recent weeks between moderate Democratic presidential candidates who argue Medicare-for-all will strip insurance from those who like their plans and their progressive counterparts who see a single-payer system as the best way to ensure access to health-care for every American.

More than a half a dozen Democratic presidential candidates cautioned that Medicare-for-all would deprive union workers of their hard-earned plans by banning private insurance in favor of coverage through a government-run single-payer health-care system. But Vermont Sen. Bernie Sanders, who made Medicare-for-all a household phrase during his prior run for president, said he would “absolutely” guarantee that the health insurance under his plan would be at least as good if not better than union insurance.

Sanders pitched his position by arguing that taking health care off of the table from union negotiations would give workers more room to push for higher wages.

“Right now every time you guys sit down and negotiate, what your employer says, what the city or the town says, ‘Okay, we're going to give you 3 percent but by the way you're going to have to pay a higher deductible or a higher copay.’ Is that right?” Sanders said, to applause from the crowd of public employee union workers. “We will do what every other major country on Earth does — guarantee all of you health care so you can sit down and negotiate decent wage increases.”

Massachusetts Sen. Elizabeth Warren, who also supports Medicare-for-all, sided with Sanders, suggesting that unions would come together around a table to “figure out how everybody gets fully compensated for what they have negotiated for.”

“I've been listening to a lot of folks including the brothers and sisters of labor, and who have said to me, ‘Look, we negotiated contracts where we’ve given up wages for these health-care benefits and under the Medicare-for-all plan we would lose them or we would be certainly in fear of losing them,’” said Harris, who supports a Medicare-for-all plan with private options and a 10-year transition period.

The transition “will allow for at least two cycles of organizing and negotiating contracts which will give folks enough time to make those decisions about how they'll negotiate under our Medicare-for-all system,” Harris said.

But they were in the minority among the 19 Democratic presidential candidates who attended a forum hosted by AFSCME, the union that represents public sector employees, at UNLV.

Vice President Joe Biden, who has largely served as Sanders’ primary foil on Medicare-for-all, called the Affordable Care Act a “big deal” and said that many people didn’t even know about the landmark health-care law “until they started taking it away.” In recent weeks, Biden has sought to frame Republican attempts to repeal the ACA with Sanders’ proposal to pass Medicare-for-all as one and the same.

“I just think if you allow words like Medicare-for-all to escape your lips you've got a responsibility to explain how you get from point A to point B,” Buttigieg said, adding that “the best way I can think of to do it that doesn't involve kicking millions of Americans off of health-care plans they like” is to offer Medicare as a public option for people to voluntarily buy into.

Ohio Rep. Tim Ryan, at one point during the forum, attempted to argue that it was possible to have Medicare-for-all — a proposal he has signed onto as a co-sponsor in the House — and also allow people to keep their private insurance. He appeared to dismiss the part of Medicare-for-all that abolishes all private health insurance in favor of a single-payer option as a small portion of the overall policy.

“I'm on a lot of bills that I don't agree with every little aspect of the bill, but the bill is dramatically moving in the direction that we need to move in, and that's how I feel about the Medicare-for-all bill,” Ryan said.

All 19 Democratic presidential candidates who appeared at the forum also agreed that there should be a federal law granting state workers the right to collectively bargain, a power Nevada granted to its state employees in the last legislative session but that does not exist broadly across the country. The law approved by the Legislature earlier this year will give more than 20,000 state workers the right to collectively bargain, but allows the governor to have the final say on their wages.

“I would not be sitting here in this seat if it wasn’t for the right to organize,” Booker said, highlighting his grandfather’s background as a union organizer.

Others used the question as an opportunity to laud elected officials in Nevada, whom they are hoping to secure endorsements from before the state’s first-in-the-West caucus in February.

“I think the governor’s done a great job here, the Legislature — by the way, a majority-female Legislature — and they got it done,” Biden said. “I think we should do that nationally.”

Though the forum primarily focused on labor issues, several of the candidates deviated from their prepared pitches to union workers to talk about the deadly shooting in El Paso, including a native of the city, former Texas Rep. Beto O’Rourke, who called for universal background checks on guns and an end to sales of “weapons of war.”

“Keep that shit on the battlefield. Do not bring it into our communities,” O’Rourke said. “I don't want to see it in our homes or in our schools or in our churches or in our synagogues.”

Buttigieg, amid early reports that the shooting could be a hate crime, warned that the country is “under attack from homegrown white nationalist terrorism.” He also placed some blame for the uptick in the ideology on President Donald Trump.

“White nationalism is evil — and it is inspiring people to commit murder, and it is being condoned at the highest levels of the American government — and that has to end,” Buttigieg said.

Some of the candidates also sparred over proposals to mitigate student debt. Warren argued that eliminating all student debt, as Sanders has proposed, would actually expand the racial wealth gap, while Sanders countered later in the day that his plan would reduce the gap from 12 to 1 to 5 to 1. Biden touted his own student debt plan, which would include free community college and trade schools and debt forgiveness for those who enter public service.

During the forum, a few candidates also committed to appointing either union leaders or someone who is strongly supportive of unions as labor secretary. Warren pledged specifically to appoint a labor leader as secretary, while Sanders said that he would “either appoint a union leader or the strongest person I know who will stand up for the working class of this country.” Harris said she would want her appointee to have experience being a worker and that she would consult labor leaders in making her decision.

They also laid out their plans for how they would implement their ambitious agenda if elected president. Former Housing and Urban Development Secretary Julian Castro said that he would do everything in his power to negotiate with Republicans in swing districts and push them to support his policies or else “maximize executive authority.” Ryan hoped for a Democratic Senate — which he thought would be made more feasible if the candidate at the top of the ticket changes the “brand” of the party — while Washington Gov. Jay Inslee said he would use his background as the executive of a state to get things done.

Other candidates faced more specific questions on their background and policy priorities.

Castro defended his proposal to decriminalize border crossings, saying that it wouldn’t drive up illegal immigration if the country enacts his 21st Century Marshall Plan proposal, which would help countries in Central America combat gangs and poverty. Biden disagreed, arguing that removing criminal penalties would “be an invitation to come” to the United States. The former vice president also justified the more than three million deportations during the Obama administration by saying that the focus was on felons.

“It was not locking up people and separating them from their children,” he said.

New York City Mayor Bill De Blasio was asked about his tense relationships with unions in the city, which he explained as a byproduct of “dealing with some very intense issues about criminal justice reform” with police unions — a police administrative judge recommended this week that an officer who placed Eric Garner in a chokehold should be fired — and “political differences” with other unions. Billionaire Tom Steyer explained why unions should trust him as a former hedge fund manager.

"I worked in investment for a long time. I gave up that job, I gave up my business, I took the giving pledge to donate my money to good causes and I've been organizing coalitions of American because this is the job,” Steyer said. “The job is to take back the government."

Self-help author Marianne Williamson waffled on her positions on vaccines during the forum, saying first that vaccines should only be mandatory in the event of a public health crisis, such as the measles outbreak, before agreeing that she would be “fine with” school districts mandating children get vaccinated before coming to school. She also argued that it was “absolutely not true” that the decision of parents not to vaccinate their children caused the recent measles outbreaks.

Hawaii Rep. Tulsi Gabbard said that she would “apologize to no one” for meeting with Syrian President Bashar al-Assad during a “fact-finding” mission in 2017, and that she would do everything she possibly can to stop the government from sending soldiers to fight in “senseless regime change wars” even “if that means meeting with a brutal dictator.”

Taylor Avery and Trey Arline contributed to this report.

Watch the forum below: