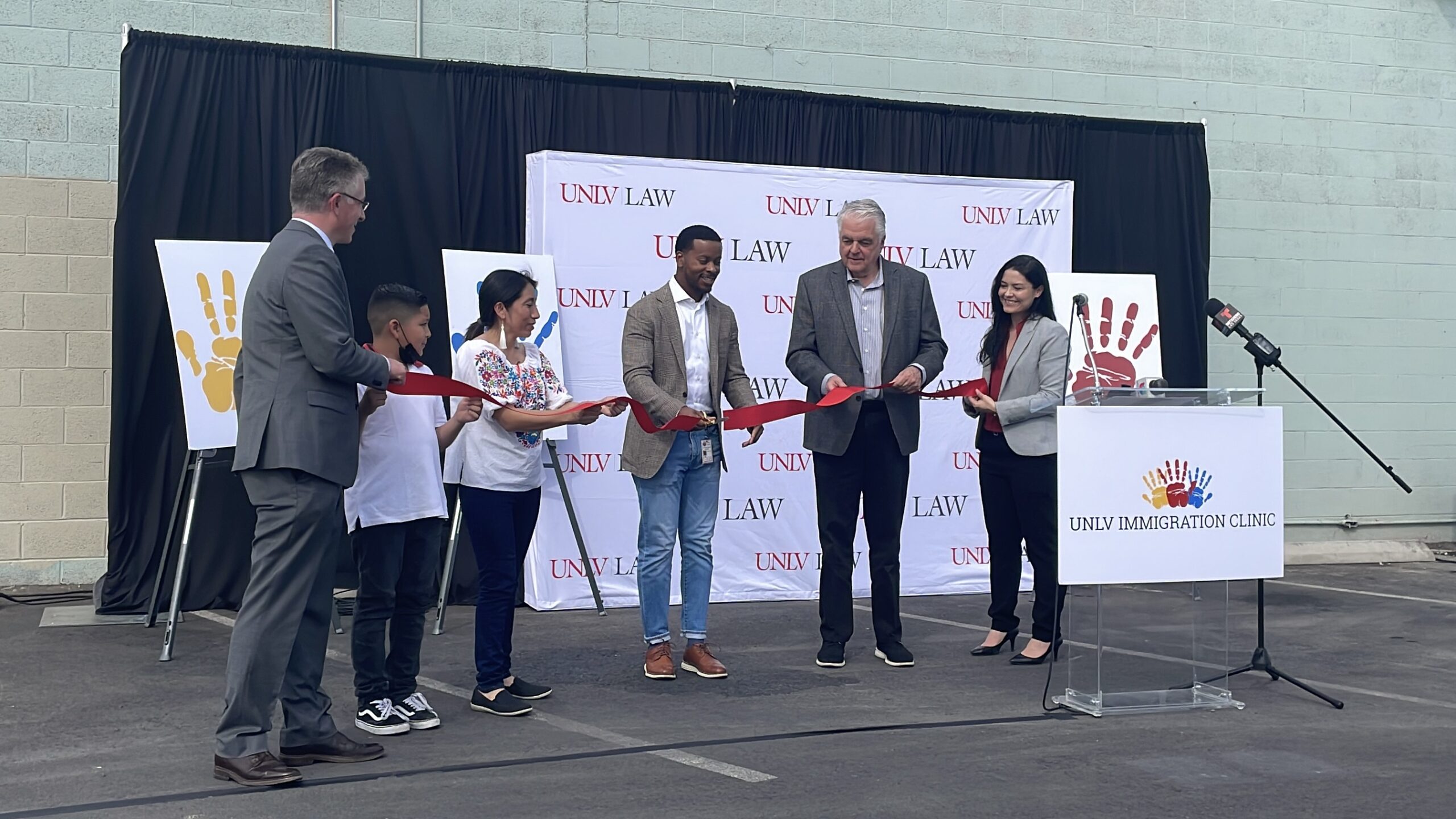 Nearly 100 colorful handprints on canvas — each representing a client from the last eight years — decorate the walls of the new off-campus UNLV Immigration Clinic office made possible by $1 million in additional funding.

The UNLV Immigration Clinic provides free consultations and deportation defense for detained adults and unaccompanied children, as well as for UNLV and College of Southern Nevada students, staff and their families. Cases can be very emotional and “arduous” said Alisa Cooley, managing attorney at the UNLV clinic.

“On hard days, looking up from our desks at the array of colorful hands on our wall reminded us of why we do the work that we do, and what’s at stake for many of the people in our community,” Cooley said.

The Community Advocacy Office in downtown Las Vegas — dedicated in a Thursday afternoon ribbon-cutting ceremony that included Gov. Steve Sisolak, Clark County commissioners William McCurdy II and Tick Segerblom, and Assemblywoman Selena Torres (D-Las Vegas) — is expected to make it easier to find for members in the community who need services but have difficulty navigating the university campus and parking. It also gives the clinic needed extra space.

“It was always very difficult for our clients to find us. You can't get a law school right in the middle of the street,” said Michael Kagan, a UNLV law professor and director of the UNLV Immigration Clinic. “We always wanted to find a way that we could be more accessible and more easily found for the people who were serving.”

During the legislative session last spring, Nevada lawmakers approved $500,000 in state funds earmarked for the clinic over the next two years, which came after the ambitious immigration reform bill AB376 that would have limited cooperation between local police and federal immigration enforcement agencies was drastically scaled back. The bill was amended to only include the funding for deportation defense, create a task force on the immigrant workforce and to create model policies for how local police agencies should work with federal immigration authorities.

A few months later, the Clark County Commission approved another $500,000 for clinic operations.

“Home means Nevada to everyone, no matter where they're from … The diversity and culture of our people is undoubtedly our strength in the state,” Sisolak said at the event. “This building you see behind me is not the UNLV Immigration Clinic. This is brick and mortar. You are the immigration clinic — the people that have made this possible.”

Kagan said the clinic is still working to address a backlog of Deferred Action for Childhood Arrivals (DACA) applicants. By September, Kagan said the office will have two more attorneys, bringing the team to six, which should help not only with the caseload for DACA but for all services with long waiting lists.

“One of the stresses and one of the difficulties with this is that even with the resources, immediately we're reminded how much bigger the need is all the time,” Kagan told The Nevada Independent. “Frankly, we end up with waiting lists for almost every one of our services.”

The UNLV Immigration Clinic was established in 2003 with the core mission to train law students to practice immigration law. However, because Nevada has one of the highest per capita populations of undocumented immigrants in the U.S. — about 7 percent — the clinic has become a major resource for free immigration legal services.

Unlike in the criminal court system, immigration courts do not appoint a free lawyer if the defendant can’t afford one, regardless of age.

Kagan said this is the first standalone, completely free deportation defense office in Nevada, and is intended to continue growing as part of the infrastructure.

“It is very well known for everybody who works in the field of immigration law, for people who are facing deportation, that having a lawyer is essential to have any semblance of the fair process,” Kagan said. “This is our community. Everybody counts here. And nobody should stand alone. We stand by our neighbors, and that's why we go to work every day.”