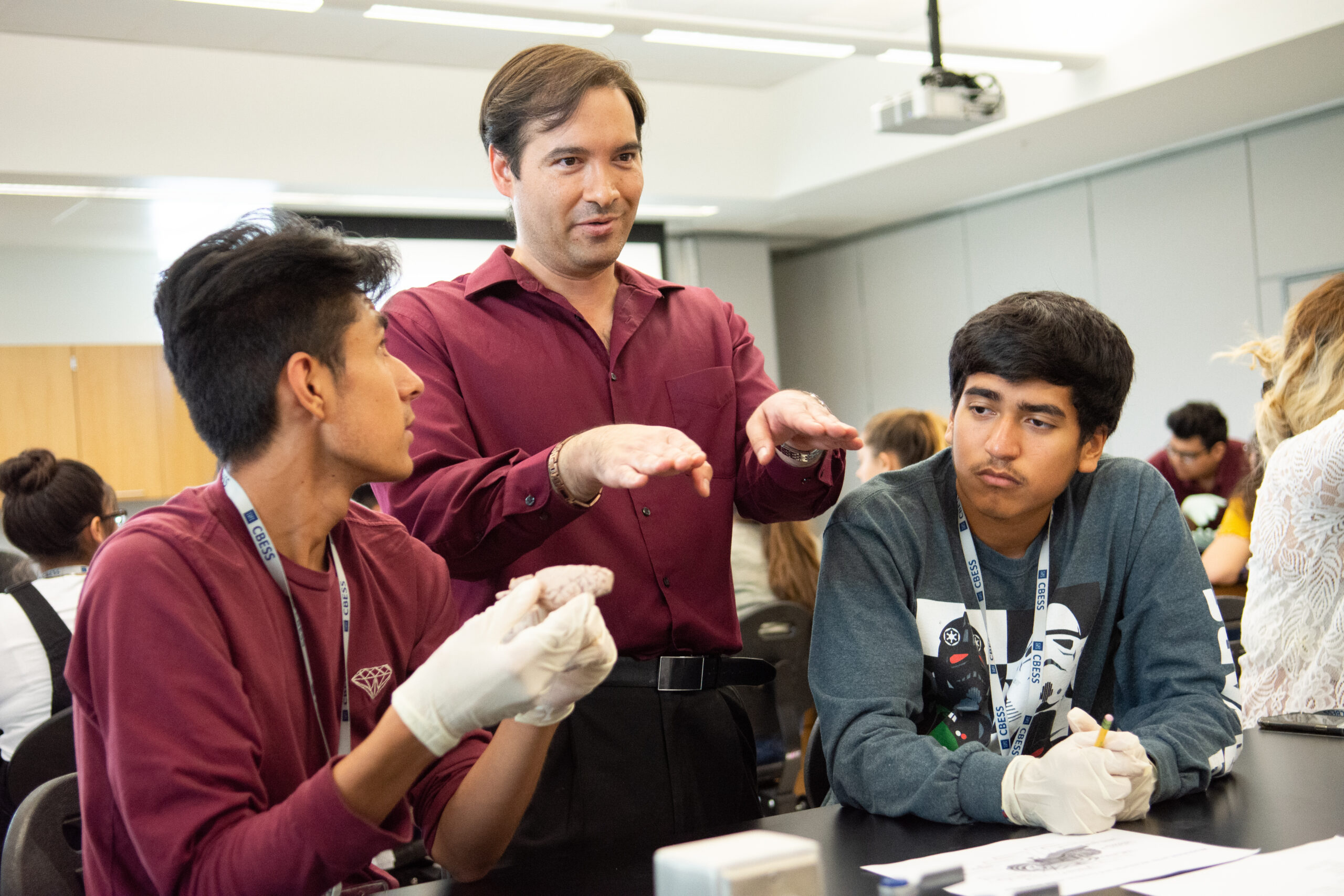 The lab smells distinctly of formaldehyde as 32 students, split into groups of four, lean over small silver trays. Each tray has a pinkish-tan brain in it, smaller than the size of a fist. Medical terms for different parts of the brain bounce between students in both Spanish and English.

In an attempt to encourage bilingual students to enter the health-care workforce in Nevada, the University of Nevada, Reno hosted a three-week program in July for students from multiple Northern Nevada school districts.

The program has a long name — Community of Bilingual English-Spanish Speakers Exploring Issues in Science and Health (CBESS) — and is funded by a grant from the National Institutes of Health (NIH). CBESS received the NIH’s Science Education Partnership Award in 2017, with the purpose of increasing linguistic diversity in STEM and health-care fields. The program has funding through 2022, with UNR associate professor Dr. Ruben Dagda and Dr. Jacque Ewing-Taylor co-leading the project.

"The idea is that we want to engage students and let them know that being bilingual is an asset,” Dagda said. “Having more bilingual speakers allows for the dissemination of knowledge in two different languages, and they understand their world much better, in terms of the medical field. It helps to bridge the communication gap between the patient and the doctor.”

Interested high school juniors apply in the fall and are notified of their acceptance in February. The application asks about the student’s level of bilingualism and requires essays answered in Spanish or English. If chosen, students are required to attend four career exploration events with their parents, who receive a stipend, as well as participate in a summer residential research program, during which students live on the UNR campus and have an undergraduate mentor.

From there, students work via an internship with various health-care professions during their senior year of high school. They also serve as mentors for the next group of students who are chosen to participate in the program.

The three-week program solidified dreams of joining the health-care field for some students.

Gaby Avina, a first-generation student and senior at Carson High School, was one such student.

“I'm really interested in mental health. I want to major in psychology and I feel like that's something that's majorly lacking, the sector of mental health, is lacking bilingual speakers,” she said. “It's very important because there's a stigma in Latino community that mental illnesses don't exist or they don't seek help when they have a mental illness. … Having bilingual professionals in this sector will probably influence and encourage people to receive the help they need.”

Other students underscored the importance of having bilingual individuals in the health-care field — a circumstance that can reduce communication barriers between patients and physicians.

"When you go to the doctor, building a connection is the first step and they don't really have that ability to build that connection so they don't feel comfortable enough to express what they're actually feeling,” said Jessica Ochoa, a senior at Douglas High School.

For Roberto Rodriguez, a senior at Silver Sage High School, health care wasn’t on his radar until the camp.

"I wasn't really sure if I wanted to apply to the program, but I was curious and I saw the opportunity to come to UNR for three weeks and stay at the dorms,” he said. “I just wanted to try things out and see how it went ... It really inspired me to look more into the health field for my future career.”

Others felt called to the program by their own experiences. Miguel Duarte, a senior at Carson High School, said he has been translating information from health-care providers for his mother since he was a child. He echoed what other students said: More bilingual health-care workers could lead to people receiving “the help they need.”

For some of the leadership trainees, the program is their way of giving back to the community.

“A lot of their stories are our stories,” said Karla Molina, a senior studying molecular microbiology at UNR. “I wanted to be part of CBESS because I wanted to show the resources I didn't have to other students. I wanted them to be more exposed to the different fields of health care to which they could apply to.”

“A lot of these kids come from backgrounds where their parents are immigrants or their family has come from different backgrounds and they only speak Spanish or one certain language,” she said. "Showing them that it's a possibility for them to get into the medical field is super important because hopefully they're going to go back and help their community and help other kids who come from a background like that.”

The program, which will see two more summer programs similar to this one in the next two years, has its limits. Only students from Washoe, Carson, Lyon and Storey counties can participate. There are no plans to offer the program to students in other counties because of funding limits.

This isn't the only effort in the state to solve health-care challenges by recruiting teens. Last week, the University of Nevada, Las Vegas held a week-long nursing camp last week for high school students and recent high school graduates to help them navigate the pathway from education to certification.

This story was updated at 12:50 p.m. to clarify the roles of Dr. Ruben Dagda and Dr. Jacque Ewing-Taylor.