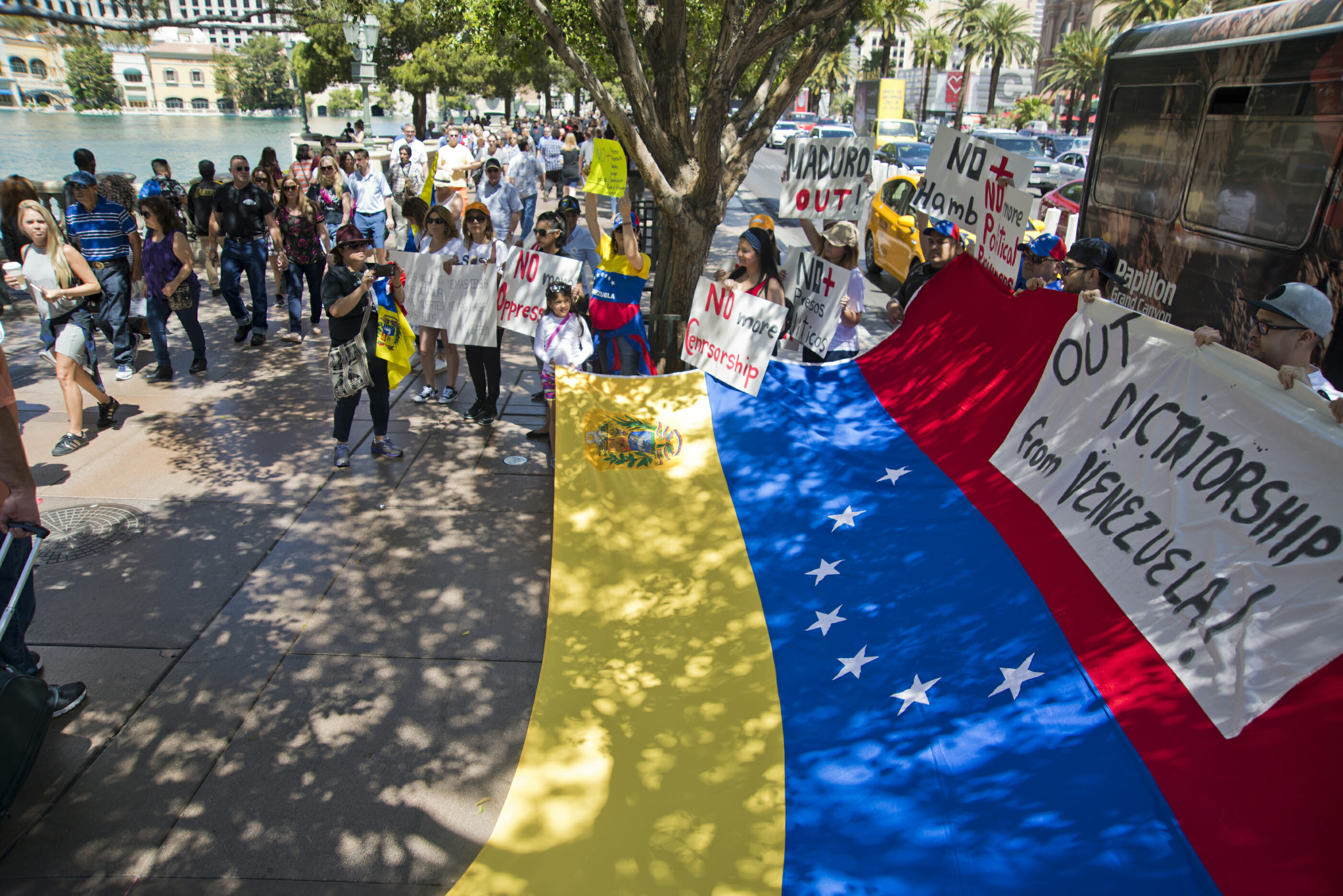 This story has been translated from Spanish and revised from its original version for clarity and length.

Yellow, blue, and red, the colors of Venezuela’s flag, caught the eyes of passersby on the Las Vegas Strip along with signs proclaiming "No more political prisoners," "No more violence" and "No more hunger."

Last week, about 50 Venezuelans now residing in Nevada waved those signs and more in front of the fountains at the Bellagio to express their opposition to the government of President Nicolas Maduro. Their demonstration came as protests continued to rock Venezuela. The unrest has occurred for the past three weeks, leading to eight deaths this month.

"We chose this site because it‘s known as a spectacular place to identify Las Vegas," said Zoraida Caldera, the director of the Venezuelan Cultural Foundation, which was created in 2000 to try to unite the Venezuelans of Nevada and highlight the values of that nation.

On Tuesday, the “mother of all protests” took place in Venezuela against Maduro’s government. The latest wave of demonstrations emerged after the country’s Supreme Court stripped the opposition-controlled Congress of its last remaining powers.

Also this week, the U.S Department of State released a statement urging the government of Venezuela "to hold prompt elections; to respect the constitution and the National Assembly; to provide for the immediate and unconditional release of all political prisoners; and, to tend to the humanitarian needs of the Venezuelan people."

Caldera said the Las Vegas group decided to respond to the call to participate in the movement of Venezuelans living abroad who used social media to organize protests on April 15 in different parts of the world, including Argentina, Scotland, Mexico, Germany and Canada.

"We want the residents of Nevada to be aware that in Venezuela, there is a dictatorship,” she said. “It’s a tremendous crisis. There is famine, and hospitals don’t have medication for their patients. We have to raise our voices at an international level to express what the Venezuelan people can’t, because there is no freedom of expression.”.

Erika Von Der Heyde, who participated in the protest, said she is a native of Caracas, Venezuela’s capital, and that, despite not facing any restrictions on visiting her country, she is considered a traitor by the Venezuelan government because she migrated to the United States and became naturalized as a citizen.

"I'm here because we want elections,” she said. “It hurts what happens in my country, all the injustices, violence and abuse of the National Guard, who is with the government and has them kill their own people so they go home and do not protest.”

Tamaris Salgado, a sociologist who has lived in the United States for 14 years, said she joined the demonstration to let the world know the situation in her native Venezuela, a nation that she visited two months ago and that no longer looks as she remembered.

"The country is completely destroyed,” she said. “There is misery; people are sad. An immense line to buy a kilo of rice or flour. A country with the largest oil reserves in the world. God blessed us with natural resources, and, nonetheless, children are dying of hunger.”

A French tourist who gave his name as “Freddie” while walking by the Bellagio said that there’s not a lot of news about Venezuela available in his country, but that he understood some of the words written on the signs the demonstrators carried.

"We don't really know what is going on, but it is good they let people know about this. I know they want things to change and to have more freedom, so we are with them," he said.

"Every day I am afraid for my family," said “Raul,” a man from Las Vegas said whose loved ones still live in Venezuela and who wanted to use a pseudonym in an interview with The Nevada Independent for what he said were safety reasons.

Raul was born in Venezuela, but he decided to pursue his dream of coming to the United States, where he arrived when he was in his thirties.

"The government of Hugo Chávez created patriotic cells - that Nicolas Maduro restored - whose goal is to denounce neighbors, the people you knew, that were against the government. That is why, when you travel to that country, people don’t talk if they don’t trust you," he said.

He has already lost count of the time that has passed since his most recent visit to Venezuela, but he keeps close ties with his family thanks to social media. However, he can’t hear their voices because phone lines don’t work, or because they’re afraid the lines might be tapped.

Raul said the government of Venezuela rations food through a magnetic card and people have to stand in line up to six hours to shop. In addition, he said, food and basic goods are scarce, and there’s a great demand for basic products which are available, but only through the black market where prices can be 10 times higher than on the regular market.

Raul traces the roots of Venezuela’s current situation to the government of President Carlos Andrés Pérez in the late 80s and early 90s, when oil prices fell and Venezuelan currency lost its value.

"It was his second term and many people voted for him,” he said. “His philosophy was to start to privatize. He wanted to increase the price of gasoline and that is how the unrest started among the people who weren’t prepared for that. Now we are paying for water and natural gas, which had always been free.”

Then another top figure in Venezuelan politics emerged: Hugo Chavez. “Raul” recalls the failed coup that took place on February 4, 1992, when Chávez was taken prisoner, and says the leader held control over the country from behind bars.

"There were cells responsible for the coup that hadn’t been identified,” he said. “We had a lot of fear. I saw aircraft throwing bombs. It was very bad. It was like being in a civil war. Then, Chavez gets out of jail and he becomes a candidate for the presidency.”

For Raul, Chavez’s ascent to power was due greatly to his campaign strategy, which focused on the poorest and most isolated regions of Venezuela and allowed him to gain popularity.

"I saw how they gave appliances to people. Chávez won with an overwhelming majority. By that time poverty was strongly felt," Raul said. “Six months later, he wanted to modify the constitution. He created referendums, he changed the system in the country; he was up for re-election. In total he spent 14 years in the government. If he hadn’t died, he would still be there."

Chávez was followed by Maduro, who took power in April, 2013.

Raul supports the different events carried out by some members of the Venezuelan community in Las Vegas, and although on this occasion he wasn’t able to participate in the protest on Saturday, he said it’s necessary to let people know what is going on in that nation.

"It’s easy to say this because I'm here, but I'd like to see more leadership in Venezuela. The whole world needs to see that the president doesn’t have good intentions," he said.

Raul remains hopeful. He says he will return to Venezuela whenever it becomes safe again.

This story has been updated to reflect the correct order of the Venezuela’s flag colors.