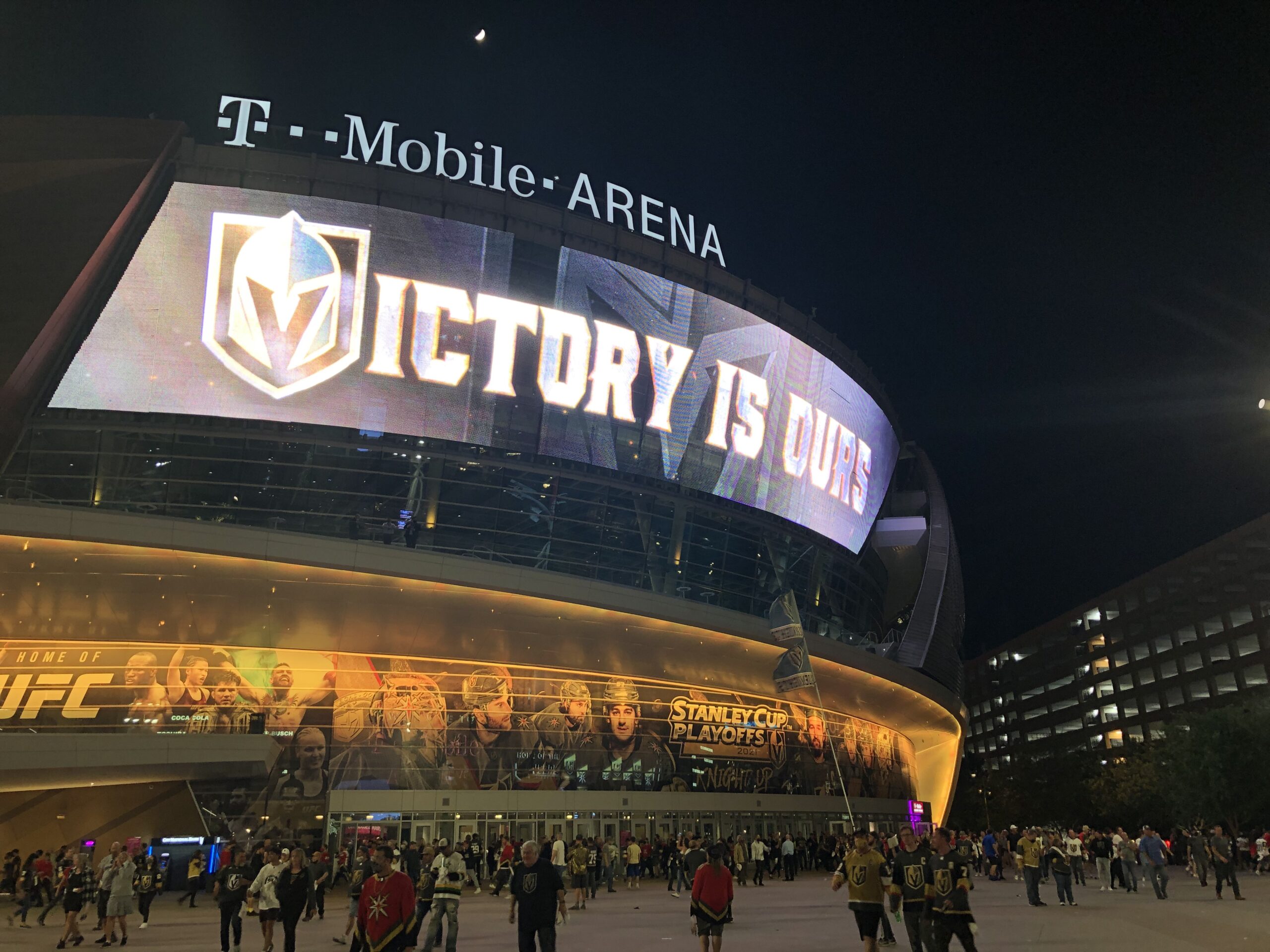 VICI announced Wednesday a $17.2 billion deal to buy out rival gaming REIT MGM Growth Properties, which owns the real estate of 15 casinos and resorts in eight states, including seven properties on the Strip. All of MGM Growth’s properties are operated by MGM Resorts International.

The purchase is expected to close in the first half of 2022 and solidifies VICI’s status as the gaming industry’s largest REIT with the eventual ownership of 43 properties in 15 states. The seven properties being acquired by VICI are The Mirage, New York-New York, MGM Grand Las Vegas, Mandalay Bay, Excalibur, Luxor, Park MGM and The Park Las Vegas, which includes the land under the T-Mobile Arena.

On the Strip, VICI will control more than 660 acres covering a dozen properties that include nearly 40,000 hotel rooms and 6 million square feet of convention and meeting space.

The Strip’s largest landowner title was actually retained by MGM Resorts more than a decade ago, back when the company controlled some 800 acres of Strip real estate. Over time, the holdings were reduced to create what MGM Resorts CEO Bill Hornbuckle refers to as “an asset-light strategy.”

In July, MGM Resorts announced a pair of transactions involving the real estate under CityCenter that leaves the company’s direct land ownership at just 15 acres.

“This transaction unlocks the significant real estate value of our assets, enhances our financial flexibility and strengthens our ability to execute key growth initiatives,” Hornbuckle said in a statement Wednesday. “We look forward to our long-term partnership with VICI.”

Jefferies gaming analyst David Katz said the “natural question” is whether other bidders might try to enter the deal.

“We consider (that) less likely based on the profile of the few other public REITs and the specific relevance of private real estate owners who have participated in Las Vegas Strip gaming in the past,” Katz said in a research note. “Further, we do not expect the concentration of ownership in Las Vegas to present an obstacle to closing.”

As part of the deal, VICI will retain MGM Growth’s 50.1 percent ownership stake in a joint venture with Blackstone Group, the New York-based investment group that owns the real estate of MGM Grand and Mandalay Bay.

MGM Resorts will continue to operate the properties for VICI under a 25-year lease agreement, with three 10-year renewals and rate escalators that will pay an initial annual rent of $860 million. Combined, VICI will collect roughly $1 billion annually from the MGM Resorts lease and the Blackstone joint venture lease.

“As is often the case with real estate deals, there are multiple moving parts,” Deutsche Bank gaming analyst Caro Santarelli said in a research note. “This deal is no different, with the implications for MGM numerous and, in our view, positive.”

VICI said in March it would spend $4 billion to acquire 63 acres from Las Vegas Sands that includes the Venetian, Palazzo, Sands Expo and the MSG Sphere project. Apollo Global Management is paying Sands $2.25 billion for the Venetian Operating Co., which covers the casinos and non-gaming attractions.

The transactions are expected to close by the end of the year or in early 2022.

Katz said VICI continues to expand and “remained active through the pandemic, showing a continued appetite for growth.”

VICI owns Harrah’s Las Vegas and Caesars Palace on the Strip, which are leased to Caesars Entertainment. VICI also owns 27 acres of undeveloped land behind Bally’s, Paris, and Planet Hollywood and has call rights on 28 acres associated with the Caesars Forum Conference Center behind the Linq entertainment promenade.

The Linq, Flamingo, Cromwell, Bally’s, Paris and Planet Hollywood are owned by Caesars, although CEO Tom Reeg said Tuesday the company plans to sell one of the six resorts by next year. VICI retains the right of first refusal if Caesars reaches a deal for those resorts.

Once the transactions close, the Strip will have just two other multiple casino owner-operators other than Caesars. Wynn Resorts owns Wynn Las Vegas and Encore, and billionaire Phil Ruffin owns Treasure Island and Circus Circus.

“From Venetian to Mandalay Bay, VICI will likely control most of the major assets along the Strip with the exception of a few properties,” Global Markets Advisor Partner Brendan Bussmann told The Nevada Independent. “While operations will differ, it definitely strikes a new era for Las Vegas where not only land and operations are separate but a different way the industry is viewed.”

MGM Resorts, which owns 42 percent of MGM Growth, will receive $4.4 billion for its stake in the REIT in addition to a 1 percent ownership in VICI, currently valued at $370 million.

On the company’s second-quarter conference call Wednesday afternoon, Hornbuckle was noncommittal on how the company would utilize the funds, although he highlighted the growth of BetMGM, the company’s sports betting and iGaming product it co-owns with United Kingdom-based Entain Plc.

"We are well positioned and remain focused on pursuing growth opportunities in our core business, with significant financial flexibility to continue to deploy capital to maximize shareholder value,” Hornbuckle said.

“The deal has far-reaching implications, in our view, both within the gaming REIT space and for MGM Resorts, who will now be equipped with even more cash on the balance sheet to put towards return-on-investment endeavors,” Santarelli said in a research note.

VICI CEO Ed Pitoniak said the deal was a “transformative strategic acquisition” for the REIT and a business model that works for MGM Resorts.

“We look forward to supporting their strategic growth objectives for decades to come,” he said.

When the MGM Growth and Sands deals are finalized, VICI, which was born out of the Caesars Entertainment bankruptcy reorganization in 2017, will have lease agreements nationally with eight different casino companies.

Analysts said VICI will transform into the largest triple net lease REIT company in the U.S. In a triple net lease, the tenant agrees to pay property expenses such as real estate taxes, building insurance, and maintenance in addition to rent and utilities. The leases tend to have a lower rent charge because the tenant assumes more of the ongoing expenses for the property.

The company has expanded outside of gaming with an investment in the Chelsea Piers, an entertainment complex in New York City, and four golf courses, including two in the Las Vegas area and one each in Mississippi and Indiana. VICI recently entered into a financial arrangement with Great Wolf Resorts, an operator of indoor waterparks.

A merger between VICI and MGM Growth, which was created in 2016 by MGM Resorts, was first floated in 2018 but never materialized. Gaming and Leisure Properties became the industry's first REIT in 2013 when it was spun off by Penn National Gaming.  Blackstone, which owns the Cosmopolitan of Las Vegas, emerged in 2019 when it bought Bellagio from MGM Resorts in a sale/lease-back agreement for $4.25 billion.

“After many years of growing both of our portfolios, combining them into one company will generate the best results for the shareholders of both companies,” MGM Growth CEO James Stewart said in a statement.

VICI General Counsel Samantha Gallagher said the company “does not anticipate” it would have to sell any of the MGM properties due to regulatory concerns over potential antitrust issues.