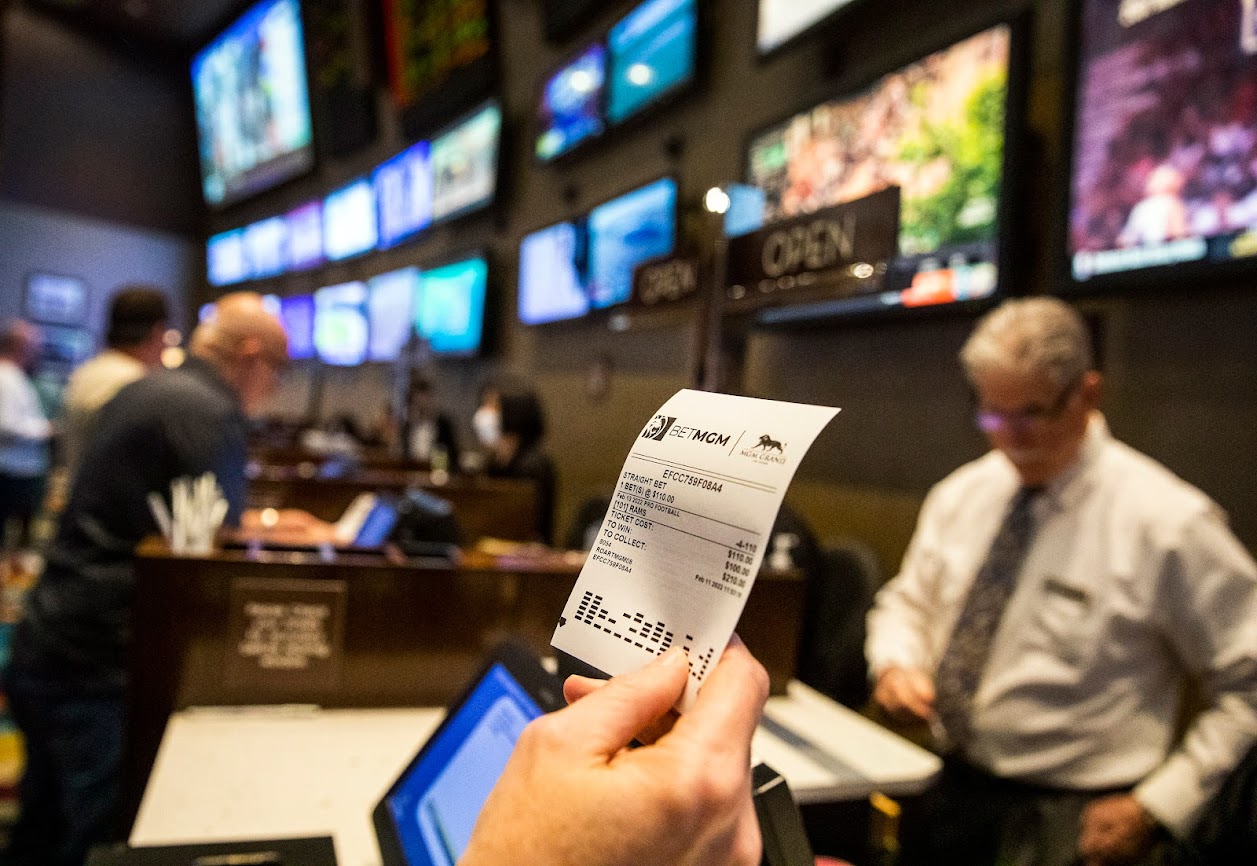 Nevada sportsbooks took in a record $179.8 million in wagers on Super Bowl LVI, smashing the state’s four-year-old previous record for the annual NFL championship game by more than $21 million.

The Nevada Gaming Control Board said Monday the unaudited total wagers were almost $44 million more than a year ago, when operating restrictions stemming from the pandemic tamped down visitation during the normally busy Super Bowl weekend.

“This year there was a normal Super Bowl party environment with COVID-19 restrictions including mask requirements being lifted,” Control Board Senior Economic Analyst Michael Lawton said in an email.

“This was my ninth Super Bowl, and it was by far the busiest,” he said. “We had 106 total (sports betting) ticket writer stations on the Strip. So the demand was high.”

The wagers on the Los Angeles Rams’ 23-20 win over the Cincinnati Bengals eclipsed the old record of $158.5 million in wagers taken by Nevada sportsbooks on the 2018 Super Bowl, which was an upset win by the Philadelphia Eagles.

The 2020 Super Bowl produced nearly $154.7 million in wagers, primarily because the game included the San Francisco 49ers, a popular team in Northern Nevada.

Sportsbooks reported $15.4 million in revenues based on the wagers, a hold percentage of 8.6 percent of the money wagered. The figure was the fourth-highest Super Bowl revenue total going back to 1991.

Sportsbook operators said the final outcome in Sunday’s game boosted the revenue amount. Jimmy Vaccaro, oddsmaker for South Point Casino, said the books needed the Rams to win but not cover the 4½-point spread and the game finishing under a total of 48½ points.

“We had one $100,000 bet on the total being under 48, and that was one guy we wanted to see win that ticket,” Vaccaro said. “Every parlay bet seemed to have the favorite (Rams) and the over.”

Most of the money line wagers – bets on a team winning the game without a point spread but that provide a high payout if the underdog wins – heavily trended toward Cincinnati, primarily because of second-year quarterback Joe Burrow.

“We had a lot of small tickets because people just fell in love with this young Joe Cool kid,” Vaccaro said, referring to Burrow’s nickname. “That happens a lot of times with a Cinderella team. People simply just bet on them to win. Sometimes, it doesn’t go our way.”

Vaccaro said the South Point’s overall Super Bowl wagering was “slightly larger than a year ago,” but the property south of the Strip rarely sees the seven-figure wagers often highlighted by Strip resorts.

Nevada sportsbooks have been on a torrid pace over the past year, reporting a record $8.1 billion in wagers in 2021 that easily snapped 2018’s single-year record of $5.3 billion in sports bets. Lawton also noted the last three months of 2021 each took in more than $1 billion in wagers.

He also credited mobile sports wagering and in-play wagering – bets placed on mobile wagering devices while a game is in progress – as influencing the final Super Bowl wagering totals.

“The continued acceptance of mobile sports wagering by customers (allows) the books to offer a wider variety of betting options with proposition bets,” Lawton said, referring to wagers outside of the score itself.

Vaccaro said the South Point’s sportsbook was busy for six to seven hours leading up to kick-off.

“We had 12 windows and they were backed up with 10 to 15 and a line,” Vaccaro said. “When I was out there walking around talking to people, you knew they were the newbies.”

He credited the nationwide growth of sports betting over the last four years with fueling the interest.

“People are understanding it better. Obviously, you can bet all over the country now,” Vaccaro said.