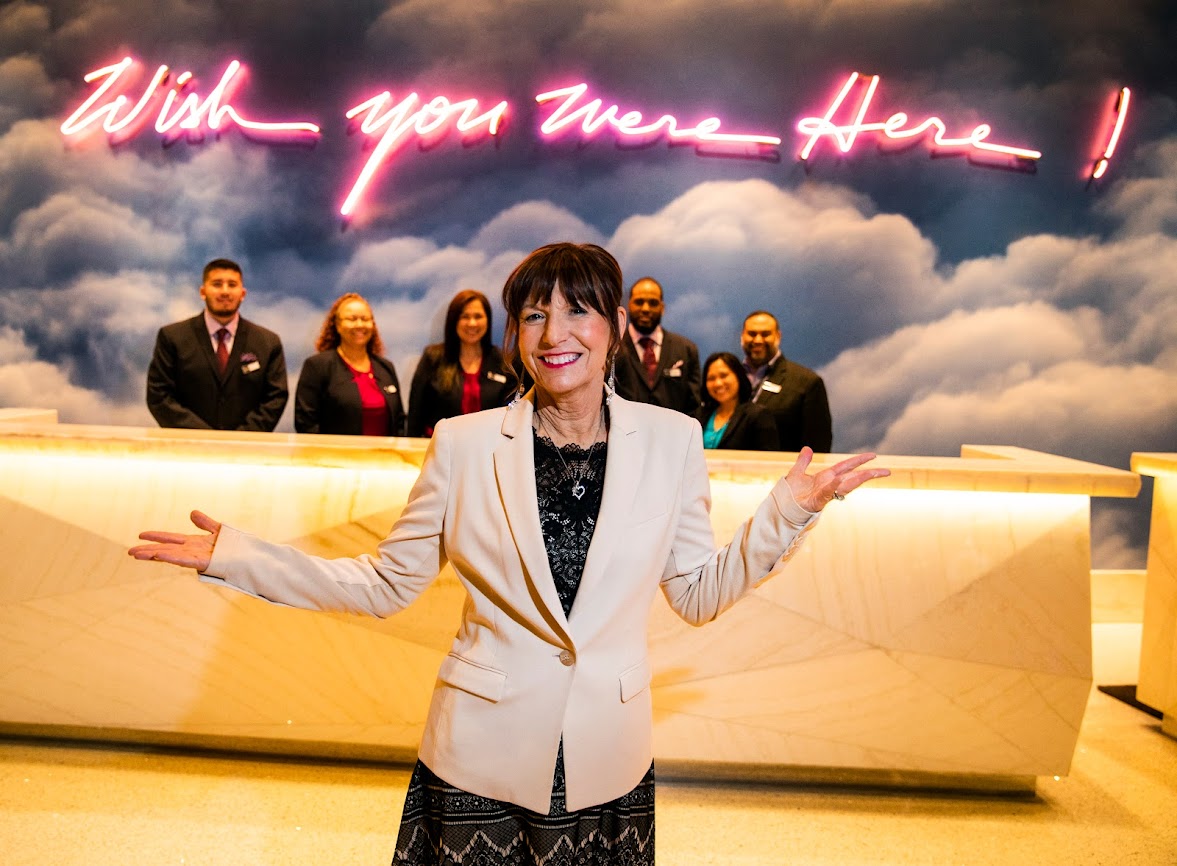 By all accounts, the late 2001 opening of Palms Casino Resort shouldn’t have attracted much attention.

With a little more than 400 rooms, the off-Strip location roughly a mile-and-a-half west of the front doors of Bellagio and coming two years after the high-profile openings of three new Strip resorts – Mandalay Bay, Venetian and Paris Las Vegas – could have been considered an afterthought.

No one told that to former owner George Maloof.

Instead of developing the Palms as a larger version of the Fiesta Rancho, which earned accolades for its service to the locals gaming market, Maloof turned the Palms into a hybrid hotel-casino, with areas dedicated to Strip customers and other features designed to attract locals.

Over time, the Palms, which was expanded, found a comfort zone catering to both distinct markets. It quickly became the place to go and be seen, partly fueled by its prominence in a popular MTV show.

Gaming historian David G. Schwartz, who has analyzed Las Vegas since the mid-2000s, credited Maloof’s original vision and his outside-the-box operating style with making the Palms part of the Las Vegas landscape.

“He knew the market, both for the tourists and for the locals,” said Schwartz, who is the Ombuds at UNLV and an affiliate professor in the school’s history department.

Schwartz believes the Palms’ newest steward, Southern California’s San Manuel Band of Mission Indians, has the right characteristics to discover the formula that will once again make the Palms integral to the Las Vegas landscape.

“They are used to serving the local customers, so I’m sure they have some tricks up their sleeves,” Schwartz said.

The story of the reopening begins Wednesday evening when the Palms’ gaming area and restaurants come to life after being closed for more than two years. The resort’s 766 hotel rooms and suites will begin accepting guests Thursday morning.

San Manuel – through the tribe’s Gaming and Hospitality Authority operating arm – acquired the property last year from Red Rock Resorts for $650 million. The sale came after a highly publicized investment in the off-Strip property that towers over the west side of Interstate 15: Red Rock spent nearly $1 billion between purchasing and renovating the Palms over a four-year period before pandemic-related decisions shut down the casino industry for 78 days starting in March 2020.

It was one of four properties that Red Rock didn’t reopen. Some $34 million in cost overruns associated with the now-closed Kaos Nightclub soured Red Rock on the property.

The sale provided San Manuel, the first Indian tribe to both own and operate a casino resort in the Strip corridor, with a recently remodeled 21-year-old property that needed just a few adjustments.

Longtime Las Vegas gaming executive Cynthia Kiser Murphey, who oversaw Strip casinos for MGM Resorts International and who San Manuel brought in to serve as the Palms general manager, said her team used the last four months after gaming regulators signed off on the sale to make just a few tweaks.

The casino floor was reconfigured to a more open format, a Caesars-William Hill-operated race and sportsbook was remodeled and upgraded with new equipment, and the coffee shop was replaced by Serrano Vista Café, a San Manuel-owned restaurant at the Yaamava’ resort.

“Our chefs are very serious about Serrano and they're featuring a few of the favorite menu items from Yaamava’,” Murphey said.

The 14-screen Brenden Theaters area is undergoing upgrades and is expected to reopen next month.

“It’s an honor and special experience to be working for the tribe’s Gaming Hospitality Authority and tribe where hospitality is at the pillar of what they do,” Murphey said.

“The tribe has a strategic plan to honor the past seven generations and honor and create opportunities for the next seven generations,” she said. “So number one, the goal is to operate with true authentic hospitality and make sure this is a successful experience.”

“We have evolved our businesses and evolved our skills,” San Manuel Gaming and Hospitality Chairwoman Latisha Casas told the Gaming Control Board in December. “We have humbly, yet competently, become successful investors in gaming, hospitality, real estate and other assets. We are very intentional in living our values to honor our ancestors, culture and sovereignty for all generations.”

Truist Securities gaming analyst Barry Jonas toured the property at the end of March and said in an email the resort was in excellent condition.

“San Manuel bought an iconic property at a significant discount to replacement cost,” Jonas wrote. He added that mistakes made by Red Rock “can likely be improved upon by the Palms’ new and well-respected management team.”

Jonas said the San Manuel tribe is both financially stable and long-term focused.

“The Palms will benefit from its sister property Yaamava’s extensive California drive-to database while having a shot at taking market share in the locals market from properties such as Red Rock Resort, and Green Valley Ranch Resort,” Jonas wrote.

Boyd Gaming CEO Keith Smith, whose company owns the Gold Coast Casino Hotel across West Flamingo Road, said Tuesday the Palms’ reopening provides a positive boost for the area. He said the Palms is a “differentiated enough product from the Gold Coast,” meaning the casinos have unique customer bases.

“Certainly some of our guests will venture over there, but at the end of the day, their home is at the Gold Coast,” Smith said in an interview following Boyd’s first-quarter conference call. “Just like when it was opened previously. They may have ventured over there for a little bit, but they came back. We wish (San Manuel) well.”

Murphey said the Palms has hired more than 1,000 employees, including hundreds who were with the property prior to the shutdown. She said having workers who know the building makes reopening easier.

“Having that experience and that rich knowledge helps,” she said. “The team walked in here, (and) they know exactly what to do and how to do it. So did other groups. That was just awesome.”

Murphey said she and other members of the Palms management team have spent the past few months getting to know the workforce and learning from the former Palms employees about the property’s history.

“What were the customers' favorite aspects of the Palms? What made the Palms distinctive, special, unique and what do we add to that?” Murphey said. “That’s some of the questions we’re asking.”

Also, Murphey said plans are underway to return the Ghost Bar to its 55th-floor location sometime this year. The indoor-outdoor ultra-lounge atop the Fantasy Tower offered a 360-degree view of Las Vegas from the sky deck, as well as a view looking straight down through a glass inset in the floor.

“I remember when there were two places to be in Las Vegas, the center bar at the Hard Rock and the Ghost Bar,” Schwartz recalled.

Murphey said returning the Ghost Bar was a gesture directed to the Palms’ former customers.

“There was a request for it and our customers are excited about it,” she said.

A hotel room with a basketball court

Maloof, who couldn’t be reached for comment, was credited with keeping the Palms in the headlines nationally and locally with many of his innovations, including “fantasy” suites that included a basketball court, bowling lanes and other entertainment amenities.

The suites are still part of the property.

A few months later, Maloof announced several Palms suites were remodeled to create one large suite for the filming of the MTV-produced reality television series, “The Real World,” putting the Palms on a national stage.

Maloof brought a Playboy Club – since closed – to the Palms with Playboy-themed suites that included outdoor whirlpool spas overlooking the Strip. The Palms also housed a recording studio that was used by well-known performers and was the first casino in Las Vegas to have a tattoo parlor.

Murphey said the Palms had several histories. Now, San Manuel hopes to write its own record for the property.

“I like to talk about this as we're reintroducing the Palms to the community under new owners,” Murphey said. “A lot of what you knew and loved about the Palms is still here, with a little bit of new.”