Will California sportsbooks lure away Nevada gamblers? Analysts say don’t bet on it 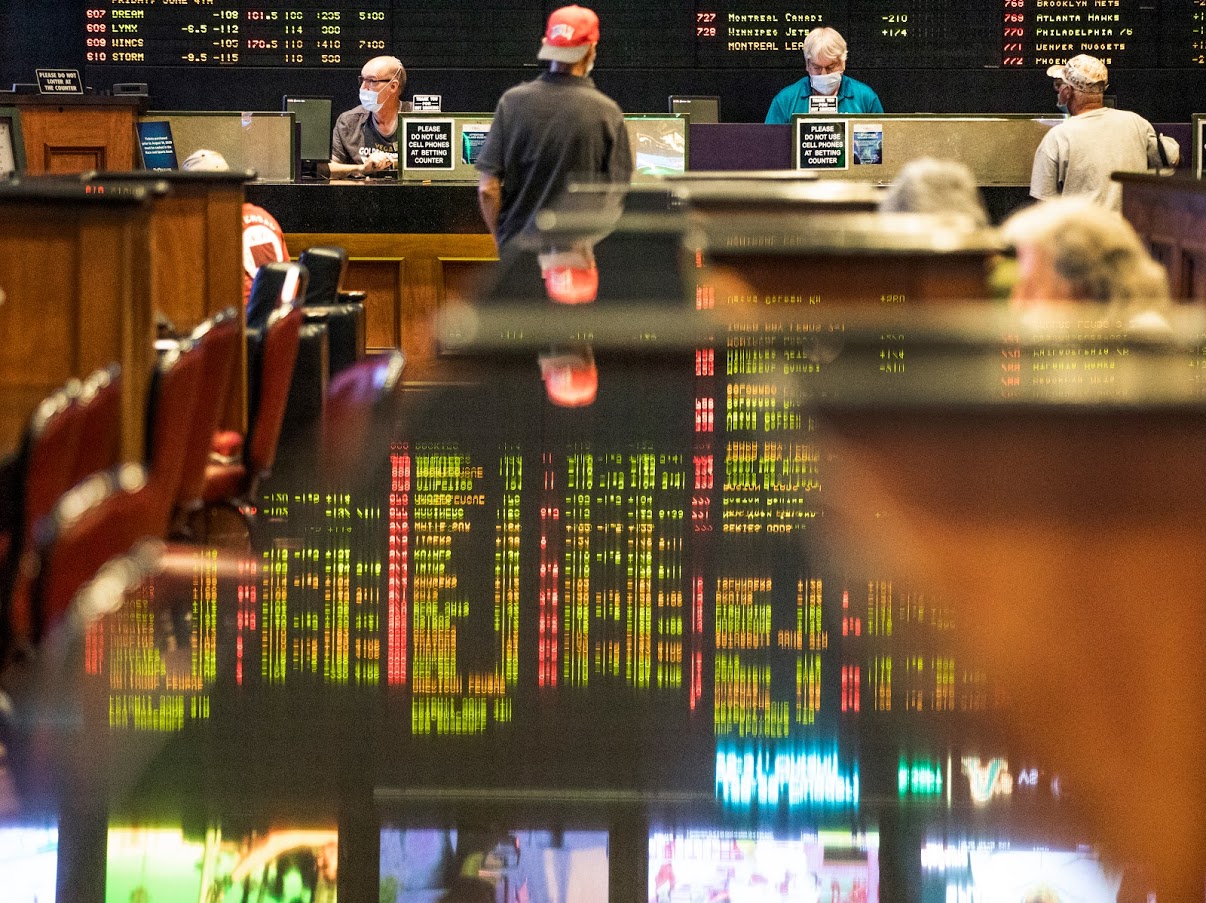 California voters will wait 16 months before weighing in on a tribal-backed ballot referendum that asks them to legalize sports betting.

Whatever occurs, it won’t change the opinion of gaming observers.

Though there is apprehension from a few Nevada sportsbook operators about potential competition from the largest feeder market to casinos in Las Vegas and Reno, analysts and sports betting experts don’t believe sportsbooks in California — the nation’s leading Indian gaming state — will slice into Nevada’s multi-billion-dollar business.

Nevada’s sports betting industry is on pace to surpass its 2019 record-setting totals.

“Las Vegas has something that will never go away. It’s a business model that is impossible to compete with,” said Maryland-based sports betting consultant Sara Slane.

“There's no reason why California has to represent a threat to Nevada's sports betting market,” Grove said. “California drive-in traffic to Vegas remains robust despite the widespread availability of various types of gambling within the state's borders.”

ESPN’s Doug Kezirian, host of Daily Wager, which is filmed inside the network’s Las Vegas studios overlooking the Strip at the Linq, believes “more legalization is better for Vegas.” Other than major events such as the Super Bowl and March Madness, “people don’t come to Vegas just to bet on sports. They come for all the bells and whistles.”

Even if California voters approve amending the state’s Constitution, the first wagers couldn’t be placed until 2023 at the earliest. Golden State lawmakers and gaming authorities also would need to sign off on regulations and procedures.

California’s secretary of state qualified the statewide ballot initiative petition last month after the tribes turned in more than 1 million valid signatures. The effort began in late 2019 and the 18-member tribal coalition sponsoring the referendum planned to put the measure on the November 2020 ballot. However, the pandemic delayed the process.

In addition to large and small tribal casinos throughout the state, sportsbooks would be allowed at four privately owned racetracks: Golden Gate Fields in the Bay Area and Santa Anita, plus Los Alamitos and Del Mar in Southern California. Cut out of the deal are California’s cardroom casinos, which offer table games but not slot machines.

Two items in the referendum are reasons analysts believe Nevada would be immune from California competition: The initiative doesn’t allow mobile sports wagering, and bans betting on games involving teams at California colleges and universities.

Tribal leaders said the prohibition would stop wagering by underage gamblers. The absence of mobile also would increase casino visitation, an important concern among the coalition’s smaller tribal casinos.

“This is an important step toward giving Californians the opportunity to participate in sports wagering while also establishing safeguards and protections against underage gambling,” Mark Macarro, chairman of Southern California’s Pechanga Band of Luiseño Indians, said in a statement.

Nevada is still No. 1

In the three years since a U.S. Supreme Court ruling allowed states to legalize sports betting, the activity is live in 21 states and Washington D.C. Nine other states and the U.S. territory of Puerto Rico have legalized sports betting, but have yet to launch. Another four states - Ohio, Massachusetts, Vermont and Maine - are considering legalization.

The speed of progress in more than half the U.S. has astonished sports betting observers.

“Who knows what will happen between now and when the referendum finally reaches the ballot in California?” Slane said.

Nevada has maintained its presence at the top of the rankings. Since 2018, 10 states have taken in more than $1 billion in sports wagers through April. Nevada leads with more than $15.1 billion in bets, followed by populous New Jersey at $14.9 million.

In 2019, Nevada sportsbooks took in $5.319 billion in wagers, an all-time record for the 10th consecutive year. Revenues from those wagers totaled $329.1 million, which was also a single-year record.

The pandemic caused the first annual decline in sports in more than a decade.

However, according to the Gaming Control Board, the state is back on pace to set another record. Through April, sports books have taken in nearly $2.3 billion in wagers, which is up 22.4 percent compared with 2019. Revenues of $150.8 million during those four months is a 44 percent increase over 2019.

Nevada sports betting operators declined comment on the California initiative. But at least three Las Vegas and Reno casino operators could have a stake in the expansion.

Boyd Gaming Corp. and Red Rock Resorts are in the process of developing tribal-owned casinos.

Boyd broke ground in March with the Wilton Rancheria Tribe on a $500 million casino resort in Elk Grove — 15 miles from downtown Sacramento. The property is expected to open in 2022. Boyd’s sports betting outside Nevada is operated through its 5 percent ownership in FanDuel and includes operations in Pennsylvania, Illinois, Indiana, Iowa and Mississippi (all fall among the top three revenue-generating operators in each state).

Red Rock is moving forward with a $350 million to $400 million casino resort project near Fresno for the North Fork Rancheria of Mono Indians. The company hopes to break ground on the casino sometime this summer.

Global Market Advisors Partner Brendan Bussmann said there is a healthy potential for collaborations and cross-marketing opportunities in California.

“Every Las Vegas and national operator will have its eye on a partnership, if not multiple partnerships, in this land-based sports betting approach,” he said.

Will California be golden?

California is viewed by analysts as a potential sports betting juggernaut.

It is the nation’s most populous state and is home to more than a dozen teams in the four major professional sports leagues. Nearly 70 Indian casinos produced an estimated $8 billion in annual gaming revenues prior to 2020, roughly one-quarter of all U.S. Indian gaming revenues.

Analysts believe adding California to the roster of legal sports betting states will put a dent in the illegal offshore sports betting industry, which is easily accessed online.

Bussmann said “all roads” to legal sports betting expansion in California have to run through the tribes.

“Sports betting in California has the potential to capture a significant untapped market that is ruled today by illegal books and retain those dollars through a tribal approach,” Bussmann said. “Californians will finally get a say on the expansion of gaming in the state.”

‘An opportunity, not a threat’

Nevada gaming regulators have reported a steady year-over-year increase in sports wagers placed through mobile devices. Grove and other analysts said the absence of mobile sports betting in California helps Nevada sports books. He suggested, however, that Nevada could further improve its standing by adding a remote registration component to mobile sports betting regulations.

“Assuming Nevada adjusts its approach to mobile sports betting to allow for a smoother customer experience, and that Vegas casinos continue to invest in creating world-class sportsbooks, the expansion of legal sports betting in California and across the U.S. should represent an opportunity, not a threat, for Las Vegas casinos,” Grove said.

Nevada will get its first real test of competition from a neighboring state this fall when Arizona launches sports betting at tribal casinos and at sports stadiums.

Caesars Entertainment has a deal with the Arizona Diamondbacks to place a sportsbook at Chase Field in downtown Phoenix. DraftKings and the PGA Tour will create a sportsbook at the TPC Scottsdale golf course.

“I don’t believe sports betting in Arizona will have any effect in Nevada,” Slane said.