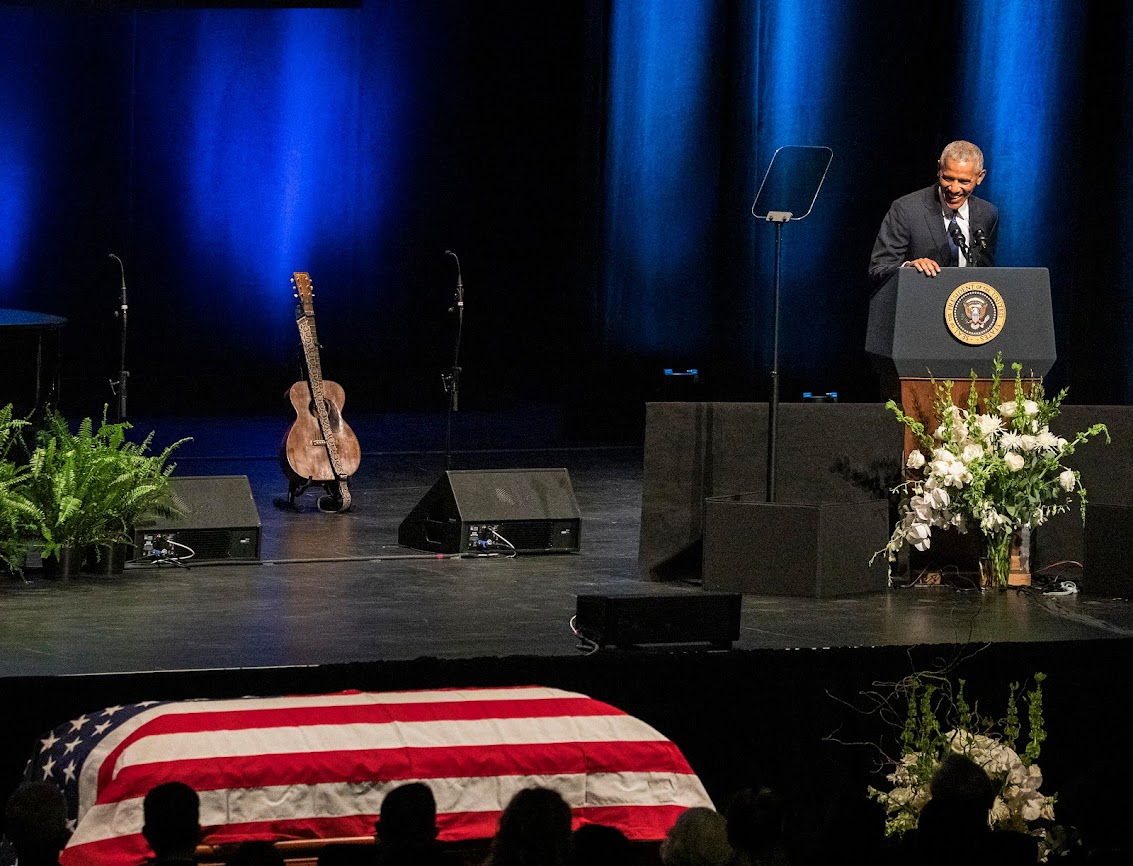 Former U.S. Sen. Harry Reid, who famously despised goodbyes, earned a farewell Saturday befitting the man who rose from abject poverty in tiny Searchlight and went on to grace the hallways of Congress, where colleagues said he fought for his home state every step of the way.

Reid died in late December at age 82 after a four-year battle with pancreatic cancer. His memorial service at The Smith Center in downtown Las Vegas drew family, friends and some 300 former staff members as well as state and national political dignitaries. Nearly all of the 2,050 seats inside the Reynolds Hall were filled.

Former President Barack Obama delivered the eulogy. He joked that Reid, who favored concise conversations and eschewed praise, probably wouldn’t want to listen to lengthy tributes about himself.

“As he looks down on us today, Harry is going to have to suck it up,” Obama said, “because few people have done more for this state, this country than this driven, brilliant, sometimes irascible, deeply good man from Searchlight, Nevada.”

The nearly two-and-half-hour ceremony mixed Washington nostalgia with the uniqueness of the Battle Born state. The venue was filled with current and former state and local elected officials, mostly from the Democratic side of the aisle. Former U.S. Sen. Dean Heller and former Gov. Brian Sandoval, now president of UNR, were the notable Republican exceptions.

Gov. Steve Sisolak also attended the memorial along with all five Democratic members of the state’s congressional delegation. Vice President Kamala Harris was also in attendance.

Grammy Award-winning singer Carole King performed her 1997 classic, “In the Name of Love” from her Time Gone By album, while Henderson native Brandon Flowers, lead singer for the rock group The Killers, performed “Be Still” and led the audience in Nevada’s state song, “Home Means Nevada,” to conclude the services.

Leif Reid said that day before his father passed away, the family shuffled through songs,  asking if he wanted to hear Bob Dylan or Bruce Springsteen.

“(There was) no response. Then we said, ‘Brandon. Do you want to hear The Killers?’ He smiled and gave us a huge thumbs up,” Leif Reid recalled.

The service offered insight into Reid’s home and family life. Reid’s wife of 62 years, Landra Reid, was escorted to her seat in front of her husband’s American flag-draped casket by President Biden.

Although the larger-than-life politician was involved in some of the nation’s most important policy decisions, his children remembered a father who put them first. Reid scribbled poetry during church services when they grew restless, played endless games of hide-and-go-seek with them and routinely brought them to Baskin-Robbins for ice cream. He also wrote them notes and always took their phone calls, they said.

Reid, a busy senator known for abruptly ending phone calls without a goodbye, was simply preserving precious time to spend with his beloved wife, Landra, and their family, his son, Leif, said. He was their hero, their devoted husband, father and grandfather — all titles he valued more than his elected ones.

“The truth is I didn’t feel like I had to share my dad with anyone,” daughter Lana Reid Barringer said. “He was always there for our family and he made time for anything that was important to us.”

Reid and his wife have 19 grandchildren and one great-grandchild, all of whom received that same unconditional love, his children said. Reid Barringer said the grandchildren affectionately referred to her father as “Poppy.”

“Our children have so many stories about things their Poppy said to their friends, some of them shocking, but always good-natured,” Reid Barringer said.

His children said Reid glowed with pride around his grandchildren and urged them to pursue their dreams. When his namesake grandson, Harry, told him goodbye for the last time, Reid, who was barely speaking, mustered five words in response: “I love you even more,” Josh Reid recalled.

The eldest son, Rory Reid, who served as a Clark County commissioner, spoke about playing high school football because his father came to all his games and it gave them more time together.

“It became central to our relationship,” Rory Reid said.

But it was his love and affection for Landra that defined his life, several speakers said. The couple met as teenagers, eloped at 19 years old and, for more than six decades, provided a model relationship to their children and those around them. In his final days, his son, Rory, recalled Reid asking for his glasses. He put them on and stared lovingly at his wife — no words necessary.

“She was the center of his universe,” Rory Reid said.

But Reid was also the center of Nevada politics. During his three-decade Senate career, he played a key role in historic lawmaking moments and built the Nevada State Democratic Party into a political force dubbed the “Reid Machine” that paved the way for many Democratic victories.

Pelosi described Reid as a “towering titan of public service,” who championed the passage of the Affordable Care Act, helped countless families with the American Recovery and Reinvestment Act and protected consumers through Dodd Frank reforms. Despite shepherding crucial legislation through Congress, Reid wasn’t one to accept praise and — yes — often hung up if Pelosi veered that direction on calls, she said.

Obama said Reid chose progress over perfection in working with colleagues across the aisle to close deals and was “humble enough to admit when he had to change his mind and grow.”

Obama credited Reid with ushering the Affordable Care Act into federal law, not to burnish his own record but to deliver health care for those without it. Reid grew up in a family that lacked health insurance. Obama recalled the former senator telling him that his brother once stayed in bed while a broken leg healed and his father once yanked out his own problematic tooth.

Pelosi went as far as saying she “never heard Harry say an unkind word about any of his Senate colleagues, Democratic or Republican.”

“I don’t know about that, Nancy,” Obama said later with a chuckle. “But he would work with them if that's what it took to move things forward.”

Biden talked of his friendship with Reid that spanned five decades.

“We became genuine friends,” Biden said. “The Irish-Catholic kid from Scranton, Pennsylvania and the Latter Day Saints kid from Searchlight, Nevada. Harry is like the guys I grew up with in Scranton. Harry would always have your back. He knew I had his.”

Schumer said Reid might have been embarrassed by the magnitude of the ceremony with two presidents and Congressional leadership.

“I know nothing he'd want less than to sit through a bunch of speeches talking about how great he was,” Schumer said. “But I knew Harry well and even though he wouldn't want it, I know a part of him would enjoy it.”

Elder M. Russell Ballard, President of the Quorum of the Twelve Apostles of The Church of Jesus Christ of Latter-day Saints, who presided over the event, said he and Reid often shared personal experiences of faith. But they also shared “a similar plight.” They each lost sight in one eye.

Reid will lie in state in the U.S. Capitol Rotunda on Wednesday in a ceremony open to invited guests. Events will include formal arrival and departure ceremonies. He is the first Nevadan to receive the rare honor.

Afterward, he will make a final journey back to his home state and be interred near Searchlight.

Reporter Humberto Sanchez contributed to this story. This post was updated to fix a word in a quote.

Watch a video of the memorial service here: