Amid budget woes, will student fees save Nevada’s college papers? 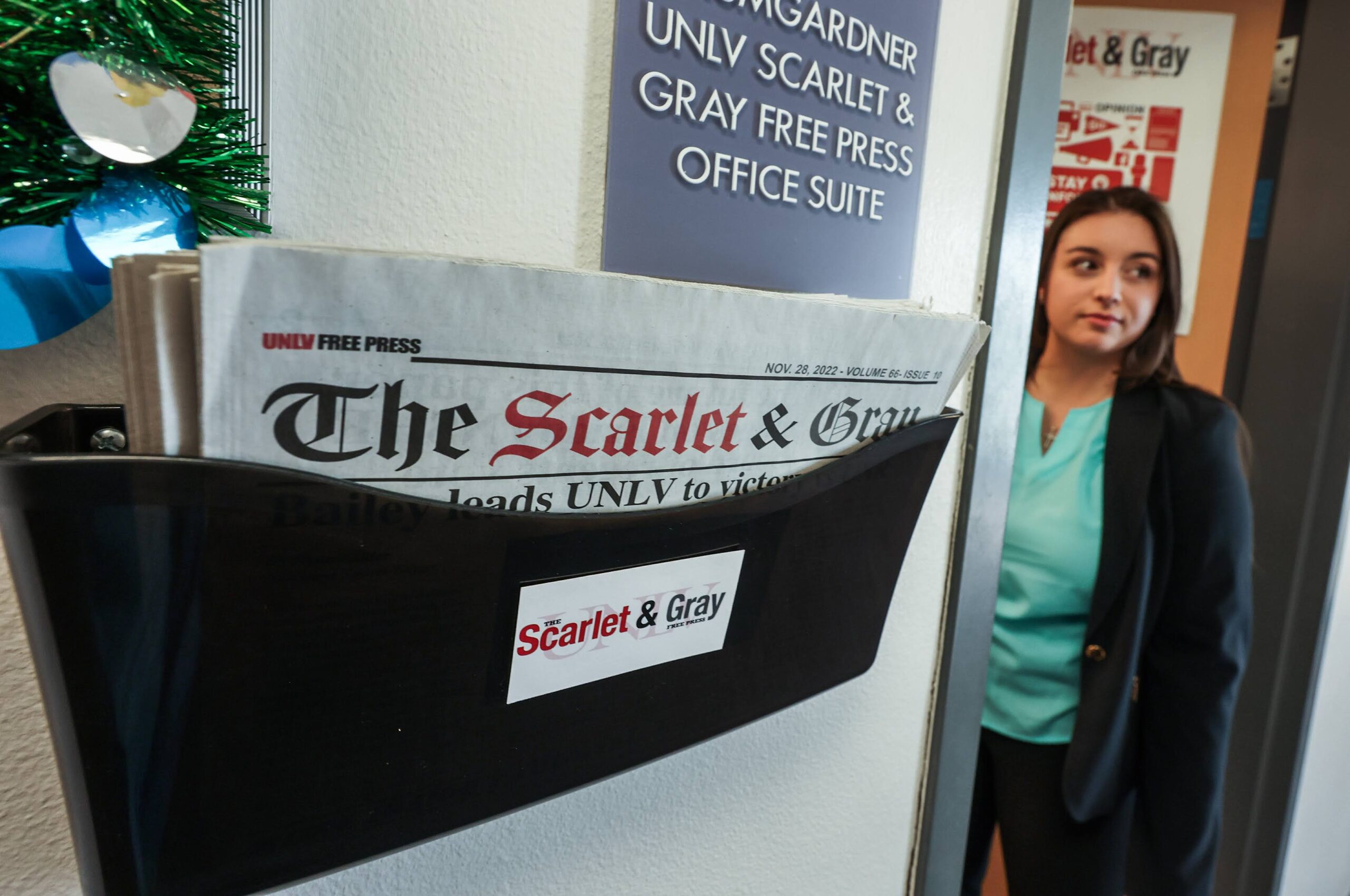 Editor's note: The Board of Regents passed the proposed student fee in a 7-5 vote as part of a wide-ranging package of fees during a meeting on Friday afternoon. Read more here.

Once a week, the Scarlet & Gray Free Press prints between 500 and 800 copies spread far and wide across UNLV’s Las Vegas campus. Once a week, the student newspaper’s editor, Vanessa Marie Booth, lugs those copies to newsstands herself by way of electric golf cart.

Without a distribution staff, Booth said it’s a job she doesn’t mind doing — even if it adds an extra strain to a full-time student workload. But one month ago, she said, that golf cart — older than most undergraduates at 25 years old — broke.

“We were like, ‘how are we going to carry our news across campus?’” Booth said, referring to the bound up stacks of fresh newsprint. “They're very heavy, and I essentially would have to push the golf cart with my own hands. Up a hill. That was not a fun experience.”

The cart was later repaired to the tune of $800. But it was just the latest in a string of budget pains for a paper with $6,000 allocated for an operating budget.

Booth said the staff has been unable to buy new office printers since 2015. High printing costs have led to page-count cuts and drops in circulation. Telephone lines and web hosting clash with staff stipend payments, leaving students — many of whom rely on student newspaper bylines to secure professional internships — underpaid and in the lurch.

“When we were back in person [from COVID], we couldn't operate at full capacity,” Booth said. “We had a lot of students who were working for us for free that we just couldn't hire because we don't have enough positions. We have a lot of positions that we've just discontinued or put on hold because of the financial stress.”

The Scarlet & Gray Free Press, formerly the Rebel Yell, has existed since before UNLV was UNLV, publishing its first issue for the nascent Nevada Southern University in 1955. Like student papers nationwide, the outlet has functioned as a niche in the city’s journalism landscape, a test bed for emergent writers and reporters closer than any other outlet to the lives of tens of thousands of university students.

With that proximity, the Scarlet & Gray has tracked upheaval inside the student government (the undergraduate president resigned after a recall just last month), the push for better on-campus parking (a perennial controversy for any student with a car) and rogue campus cats.

But 67 years later, the paper is one of many student-run campus outlets that has watched the reliable pillar of advertising revenues crumble. Following years of down budgets, the losses have left open questions about how the paper might continue.

Today’s existential crisis is not the paper’s first. Notably, the outlet was embroiled in a brief budget fracas in 2016 after it saw university funding sharply reduced, amid a broader debate over a change from a name — Rebel Yell — that is still implicitly tied to the confederate imagery common to the university’s founding.

Later, the newly named Scarlet & Gray saw its printing costs subsidized through a free-printing deal with the Las Vegas Review-Journal, in addition to $20,000 in annual funding from the state’s largest metro daily. In total, the budget amounted to anywhere between $60,000 and $80,000 per year, with the remainder funded through the university’s student life funding committee.

But in recent years, that university funding has continued a sharp decline. The funding committee gave $100,000 as recently as 2016, but that monetary allotment fell first to $60,000, then again to $40,000. Then, on short notice, the free-printing deal disappeared last winter, too.

On Friday, regents for the Nevada System of Higher Education (NSHE) will vote on a $0.20-per-credit-hour fee for students at UNLV designed to fully fund the Scarlet & Gray. Multiplied across the credit loads of more than 29,000 students, it’s expected to net an annual revenue of nearly $140,000 — roughly double the current budget.

The proposal — nearly 12 months in the making, according to Booth — comes with the backing of not just student press advocates, but also UNLV’s undergraduate student government, graduate student association and top administrators.

Booth and others have characterized the move as a push toward long-term financial solvency, a permanent funding solution untethered to the ebbs and flows of advertising, student representatives and individual college administrations.

“There's other fees — students pay hundreds of dollars in fees every semester,” Booth said. “And to pay 20 cents per credit hour, I don't think is a very large price to pay for something so important.”

Booth has now expanded her lobbying efforts to include individual regents, too. But it's not just those at UNLV waiting with bated breath to see how the board might vote.

A push beyond UNLV

The use of per-credit student fees to fund student journalism is not new, with a distinct push emerging across the last decade — both in the wake of the Great Recession and, by extension, the rapid decline in print advertising revenue.

The student media  industry mirrored the broader collapse of newspaper journalism. Between 2008 and 2018, industry advertising revenue dropped 62 percent, according to the Pew Research Center, while employment at print newsrooms was halved.

But the use of such fees would be novel in Nevada, where the two largest student papers at UNLV and UNR have long relied solely on advertising in a bid to keep university administrators and student government at arm's length from editorial decision-making.

Over the last decade, the two university papers — both published weekly, and until recently, both in print and online — have felt the financial strain of the collapsing print business model. At The Nevada Sagebrush at UNR, for instance — where advertising money, rather than any university funds, has long propped up operations — the budget cuts have become even more dire.

Print ads in particular have long drawn far higher rates from local advertisers than online equivalents, a dynamic that accelerated a budget crisis when the Sagebrush — also largely without a direct funding relationship to either the student government or the university’s journalism school — stopped printing physical issues after its printer went out of business amid the pandemic. The situation forced a switch for the first time in its nearly 130-year history to an online-only publication.

Now, the paper operates on a skeleton crew of volunteer writers, running on a budget only a fraction of its former glory. According to Mike Higdon, a Sagebrush alumni who has more recently worked to help fundraise as part of the “Save the Sagebrush” initiative, the Sagebrush’s budget once peaked at $150,000 under ad sales alone in the late 2000s.

“The money that we have we need so badly,” Sagebrush editor Emerson Drewes said. “If we don't raise enough money, we're gonna be gone in two years.”

And while the student fee push at UNLV has already arrived before the Board of Regents, a similar push at UNR is also underway that could, if realized, fund not only a newspaper, but student radio, a magazine and a separate literary magazine.

That push is likely months away from a vote before the regents, as the Sagebrush and other student media advocates at UNR look to secure funding from the undergraduate student government — something that is no guarantee, amid an often-confrontational relationship between student representatives and the paper that covers them.

But in watching how regents will respond to a student fee at UNLV, Drewes said the vote “means everything.”

“If they don’t pass UNLV’s, then what does this mean for us?” she said.

But if regents do give the fees the all clear? “This will definitely be a shining light of hope,” Drewes said.

Should the fee fail, either for the Scarlet & Gray or eventually for the Sagebrush, it’s unclear what could happen next, especially as the digital advertising environment remains uneven and staffing levels remain bare bones.

“For anyone that says ‘go find a new advertising opportunity, go find a new strategy,’ I urge them to help us out,” Drewes said. “We can't really expend much more manpower than we already have.”

Editor’s note: This story was edited by Assistant Editors Michelle Rindels and Jackie Valley. Editor Elizabeth Thompson did not participate in the editing process because she has given strategic advice to The Nevada Sagebrush. In addition, reporter Jacob Solis is a former editor of The Nevada Sagebrush.