As charter schools multiply, teachers at traditional public schools have a choice — stay or go? 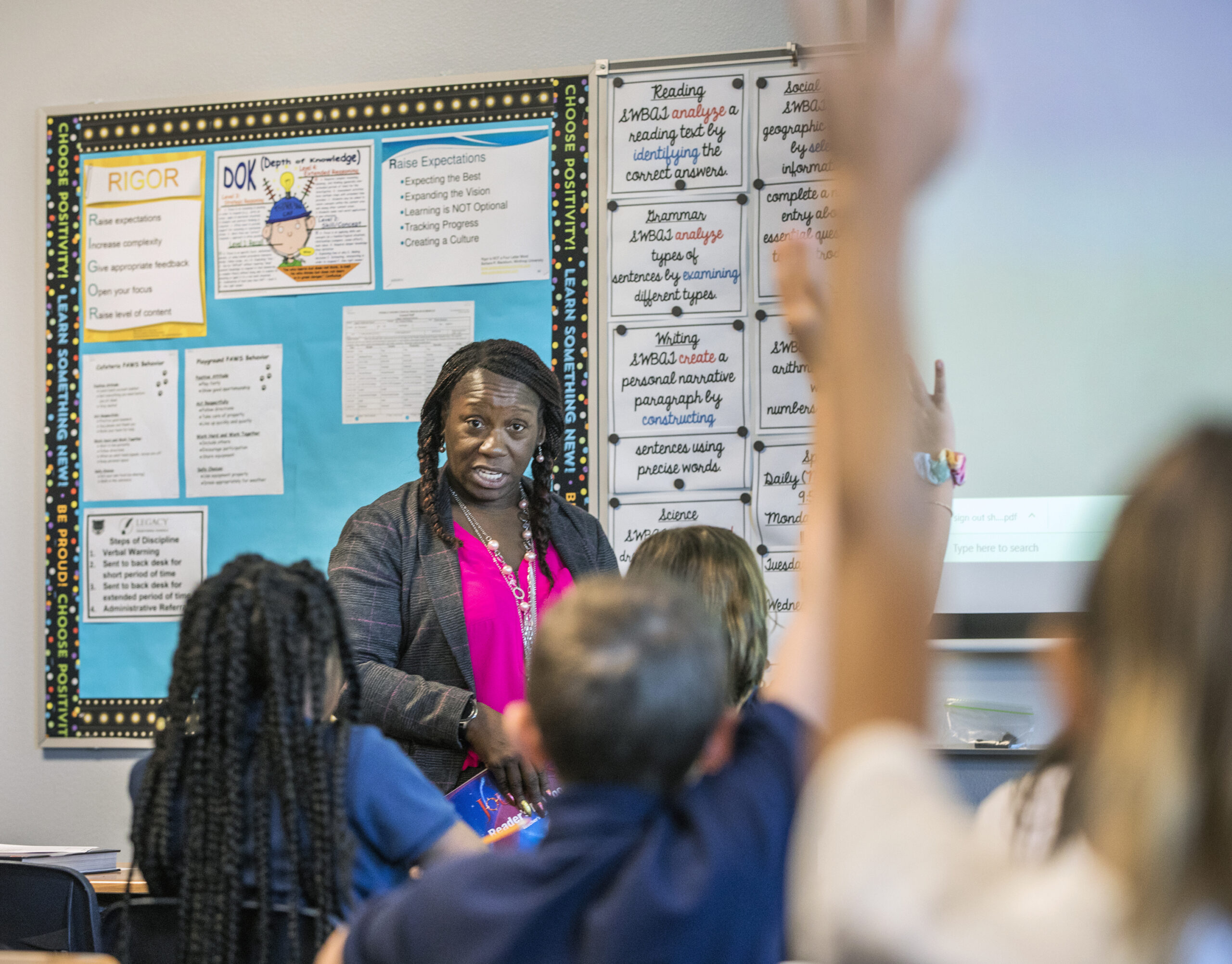 She spent 18 years working for the Clark County School District, where she sent her own children while also serving as a teacher, dean and, later, an assistant principal.

“I didn’t know anything about charter,” she said. “I wasn’t very familiar with it.”

That changed more than a year ago when a childhood friend encouraged her to look into Legacy Traditional Schools, a public charter school network that has been growing in Southern Nevada. The suggestion came at a moment when Welling was contemplating her future — retirement or a career change? She chose the latter, describing her jump to charter schools as her “something else.”

Welling joined Legacy as an assistant principal at its North Valley campus last year. Now, she’s principal of the Legacy Traditional School Southwest Las Vegas, which opened earlier this month and, like its sister campuses, features a back-to-basics educational approach. Here, students learn cursive, sit in rows of desks facing the teacher and can immerse themselves in fitness and performing arts programs on top of regular academics.

Welling acknowledges the educational philosophy may not be for everyone, but she didn’t run into major problems recruiting 60 teachers to the new school. Her campus started the year with one vacancy — a part-time music teacher. About a third of those teachers, she said, came from traditional public schools.

“People just want to try something else and, if they feel supported and if they feel that small family feeling, I think that’s important,” she said.

Charter leaders say their schools certainly aren’t immune to Nevada’s teacher shortage issue. They have to work just as hard to attract and retain educators, and vacancies happen. But as charter schools multiplied in Nevada, the State Public Charter School Authority effectively became the third-largest school district in the state, serving more than 42,000 students last year. Add charters sponsored by school districts to the mix, and the student population balloons even larger. By comparison, the Clark County School District serves about 320,000 students, while the Washoe County School District enrolls nearly 64,000.

So why are some educators making the leap?

If teachers make the move to a charter, they’re technically still working at a public school.

Charter schools are public schools that operate under a performance contract issued by a public entity, such as a school district or the Charter Authority. Advocates hail the arrangement as a way for educators to have more autonomy and pioneer new teaching strategies. But critics say charters — which are sometimes managed by for-profit companies — don’t serve a demographically representative student population and siphon money from traditional public schools because they receive state per-pupil dollars.

Most charters also don’t come with the perceived safety net of a union. Nationally, about 11 percent of charter schools are unionized, according to a report released in March by the Center on Reinventing Public Education. But Rebecca Feiden, executive director of the State Public Charter School Authority, said she’s not aware of any Nevada charter schools with unions.

Charter schools started in Minnesota in 1992, igniting a fiery debate in the education realm. The tension isn’t lost on educators who have made the switch.

Kevin Ford teaches eighth-grade English language arts at Doral Academy’s Fire Mesa Campus in northwest Las Vegas. After spending several years at a Clark County School District elementary school, Ford said he wanted to go outside his “comfort zone” but had preconceived notions about charters. He worried charters were eroding public education. But he accepted a friend’s offer to tour one anyway.

“After I went out there and viewed it, I was like, ‘Oh, it’s not that different,’” he said.

Doral Academy’s emphasis on arts integration, however, was different enough to lure him there.

Kelly Rafalski, the principal at Doral Academy’s Fire Mesa Campus, came from the Clark County School District, too. For her, the move was about greater autonomy, a smaller organization and fewer off-campus meetings.

“I like being able to be a school leader, a coach for teachers, here for my students,” she said. “They get to see me every day. I’m on campus all the time except for the rare principals meetings, which is usually once or twice a month.”

The teachers Rafalski recruits don’t solely come from the surrounding school district. This year she hired teachers from Pennsylvania and Utah. And while teachers may yearn for a philosophical void they think charters can fill, Rafalski said money can be an obstacle. She can’t always match the higher salaries veteran teachers earn in the school district, which, in turn, means it’s easier to attract younger educators.

“I never had to talk salary with teachers,” Rafalski said, referring to her time at the school district. “That’s more of a puzzle we have to work with (at) charters.”

Academica Nevada, a for-profit charter management organization that services several Nevada charter systems, has promoted teacher autonomy and offered annual retention bonuses and tuition reimbursement programs, said Ryan Reeves, the organization’s chief operating officer. But he doesn’t believe charters are any worse or better off than the school district when it comes to filling classroom positions.

The State Public Charter School Authority has been collecting data about staff vacancies at charters under its purview.

Information from the charter schools or networks that have responded shows a mixed bag.  Nineteen schools reported zero teaching vacancies as of Aug. 16, according to data from the Charter Authority. On the higher end, Imagine Schools at Mountain View reported 15 teaching vacancies, and Mater Academy Mountain Vista had 19 at that time. It’s unclear what the teacher vacancy rate is across Charter Authority because not all schools have reported their numbers yet.

If charter schools have a recruiting advantage, it could be a more personalized touch, said Carrie Buck, executive director of Pinecrest Academy of Nevada. Without a large human resources department, principals often attend job fairs, allowing them to speak directly with prospective teachers, she said.

Pinecrest also gives cash incentives to teachers who stay and recruit other staff members. In the end, Buck said, it boils down to word of mouth — not really any different than how charters entice families to enroll their children.

“How do we get kids? Well, we get other parents to talk about how awesome we are,” she said. “It’s the same thing with teachers. Teachers talk.”

She said a variety of factors are likely at play, including teachers’ quest for more autonomy or their perception that the job may not be as difficult. Compared with Nevada’s traditional public schools, state-sponsored charter schools enroll a disproportionately lower number of students learning English as a second language, living in low-income households or who have an individualized education program (IEP). Efforts are underway to change that dynamic, though.

Chris Daly, the deputy executive director of government relations for the Nevada State Education Association, agrees with her theory.

“We do know that sometimes teachers will leave schools in tougher neighborhoods in Las Vegas and head to the suburbs,” he said. “You can almost make a similar argument about why you’d leave a central Las Vegas school and go to a charter.”

Legislation passed this year aims to make the charter student population more demographically representative of the state. Assembly Bill 462 requires the Charter Authority to do an annual academic and demographic needs assessment. Applications for new charter schools must meet at least one of the needs identified by the assessment to gain approval.

The demographic needs identified in the Charter Authority’s first assessment are for charter schools that serve underperforming student populations, such as English language learners, children living in low-income households and students with IEPs. Applicants hoping to fill an academic need must either locate a charter in a ZIP code with one- or two-star traditional public schools or propose a model that prevents at-risk students from dropping out of school.

Even so, teachers who moved to charter schools say they still encounter many of the same challenges they did in their prior classrooms. Ford, who teaches at a Doral Academy campus, said one of his students threw a shoe across the classroom on his first day at the charter school.

“It was just an eye-opening experience that kids are going to be kids no matter where you are,” he said. “Being in a charter doesn’t fix it in itself.”

The movement of teachers is a two-way street. Some try a charter, only to realize it’s not the right fit and return to a traditional public school.

The Clark County School District doesn’t specifically track the number of teachers departing for charters or returning from them. School district data, however, shows that 60 teachers left between Aug. 1, 2018, and July 31 because they were moving to another Nevada district, which could include charter schools. Sixty-six Clark County teachers didn’t give a reason for their departure. Hundreds more teachers left for a variety of other reasons, including retirement, out-of-state moves, family matters and career changes.

The district’s ongoing labor dispute with the teachers’ union and looming threats of a strike have heightened fears that even more teachers will flee traditional public schools — with perhaps some winding up down the street at a charter. If so, they’ll likely encounter other district expats.

Tiffany Thompson is among those who made the jump to charters and then stayed. Thompson, a sixth-grade teacher at Legacy Traditional Schools’ new campus in southwest Las Vegas, previously taught at district schools in Clark County and San Diego.

Ultimately, she sought an environment where she felt supported both in spirit and resources. She wanted her students to have their own textbooks, not a shared book or photocopied pages.

Without those worries hanging overhead, Thompson said she has more time to connect with her students and their families.

On a recent day in her classroom, that meant diving into a lesson on sentence subjects and predicates. As her uniform-class students sat in tidy rows of desks, Thompson used her animated personality to engage them and make a mundane topic more fun.

That’s the universal challenge all teachers face, regardless of their academic setting.