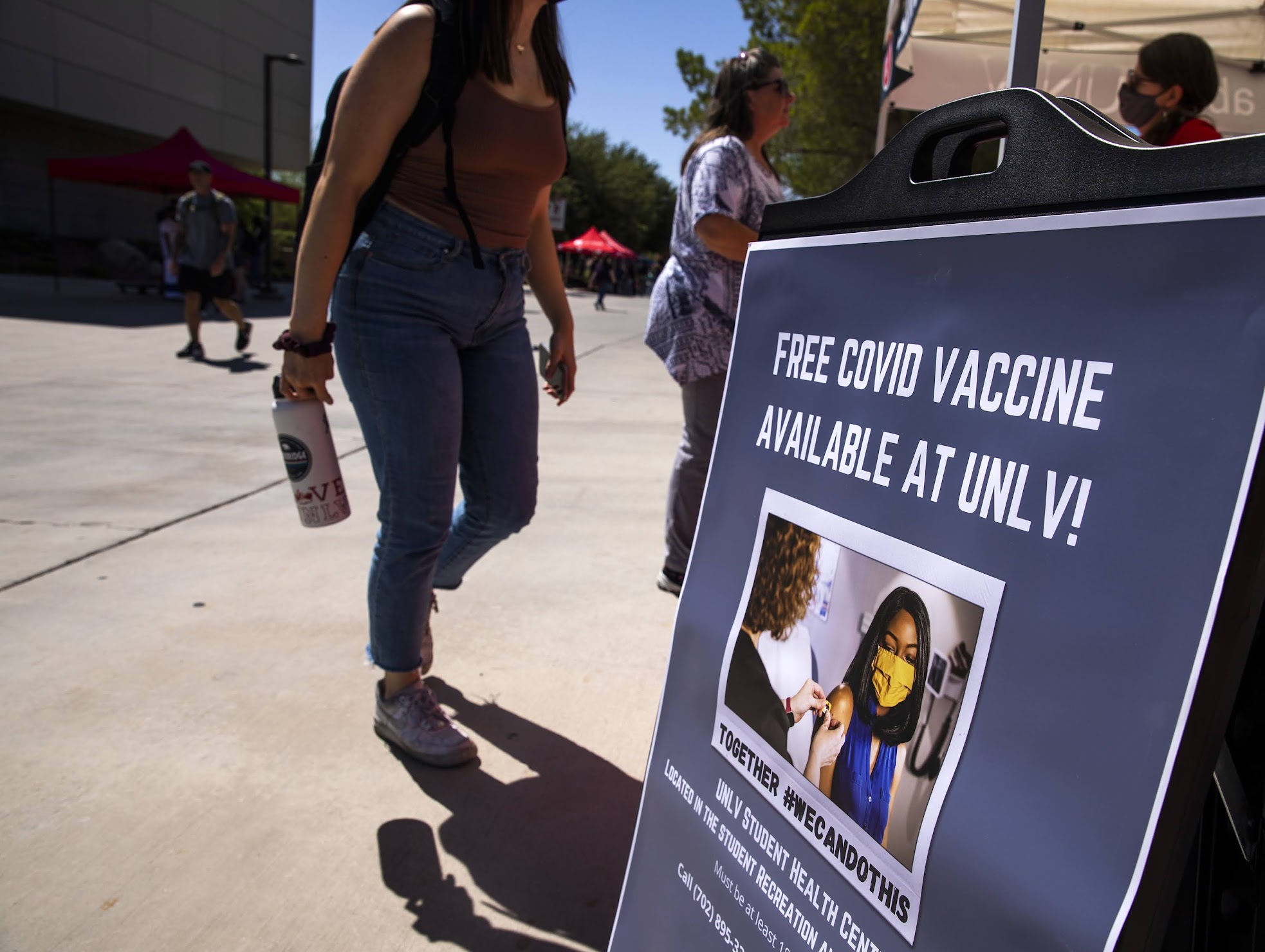 With just weeks to go before mandate deadlines arrive, it’s far from clear how many of Nevada’s college students and higher education system employees have received a COVID vaccine.

At UNR, more than 16,000 students have submitted evidence of full COVID vaccination, and another 625 had received approved exemptions as of last Wednesday. According to preliminary enrollment data, that accounts for roughly 82 percent of the 20,263 students enrolled.

In the south, more than 23,500 student vaccination records had been processed at UNLV as of Friday, or roughly 77 percent of its 30,626 students. At Nevada State College, in Henderson, 2,595 of nearly 4,200 students have submitted their records, or roughly 62 percent.

When asked, however, not all institutions readily shared their aggregate student vaccination data.

A representative of the College of Southern Nevada in Las Vegas said Friday that it would treat the question as a formal public records request and subject it to a five-day-long response period (and as of publication, no response had been made).

A representative from Great Basin College in Elko told The Nevada Independent the school’s data was “incomplete” but might be shared after it was completed in the spring. And a spokesperson for Western Nevada College in Carson City said the request for data was declined in part because the college only began enrollment for returning students last week and won’t begin it for new students until Monday.

For students, in particular, the numbers have been shaped in part by exceptions created to accommodate various situations. Enrollment traditionally declines from fall to spring, as students graduate in the winter or drop out of classes entirely. For those who remain, a relatively small proportion of exemptions for religious or medical reasons have been granted, and any students with an all-virtual class load do not need to comply with the mandate.

“[If] people just don't want to get vaccinated, they'll just take online classes and then the on campus vaccination rate will be much higher as opposed to the student body rate with exemptions,” Brian Labus, a professor at UNLV’s School of Public Medicine, said in an interview.

The data will likely remain incomplete for weeks or months because students must only prove vaccination status when they register for classes.

“Students who are trying to get into a class with a limited number of seats are probably submitting [their vaccination status] earlier,” Labus said. “If the students are dragging their feet, not sure what they want to take, not registering for a while — then they may be vaccinated, but not actually tell us until a later date.”

Those enrollment periods stretch well into January of next year, with a no-late-fees deadline of Jan. 14 for UNLV and UNR and Jan. 24 for Nevada State College and the four community colleges.

Among higher education employees, specifics of the mandate differ. Though employees working remotely are exempt, the mandate was initially designed to achieve at-or-near full vaccination rates across all eight system campuses and the system’s central office.

When regents approved the employee mandate in a 10-3 vote in September, Chancellor Melody Rose was bullish that the system would not see a mass exit because of the new requirements.

“I don’t believe that we will lose thousands and thousands of employees,” Rose said at the time. “I don’t think that’s what the data indicate. We’re not seeing that at other institutions that initiated their requirements earlier than we did.”

Employee vaccination rates have been generally high, nearing 88 percent in the first week of November. Still, the raw number of unvaccinated individuals remains in the thousands — 2,749 individuals, or 11.8 percent of all employees — with a little more than two weeks before the Dec. 1 deadline to submit proof of vaccination.

In an emailed response to The Nevada Independent, NSHE Vice Chancellor for Public Affairs Constance Brooks said there is no way to know how many of those employees will remain unvaccinated.

When asked if the system was concerned that hundreds of employees could be fired because of the mandate, Brooks said that there is “cause for concern” when employees choose to end their employment “for any reason.”

“While we have had no experience with this exact [human resources] scenario before, the loss of multiple employees at one time is not ideal and we will do all that is necessary to keep instruction, services, and programming from being disrupted,” Brooks wrote.

Brooks said the system is not tracking vaccinations by employee type, so it’s unclear how those still-unvaccinated employees are distributed across different position groups, such as academic faculty, administrative faculty or support staff.

As the pandemic continues to churn around the edges of daily life, Labus said vaccines are only one piece of the COVID mitigation puzzle, and that various institutional procedures will continue to affect the spread of the virus.

“We still have a mask mandate, and we're going to see those [environmental] differences,” Labus said. “The community colleges and commuter campuses have different challenges than a residential campus. If we have 1,000 students living in dorms and Reno has 10 times that, they have a completely different environment, and much greater challenges in dealing with that when it comes to housing people in close contact.”