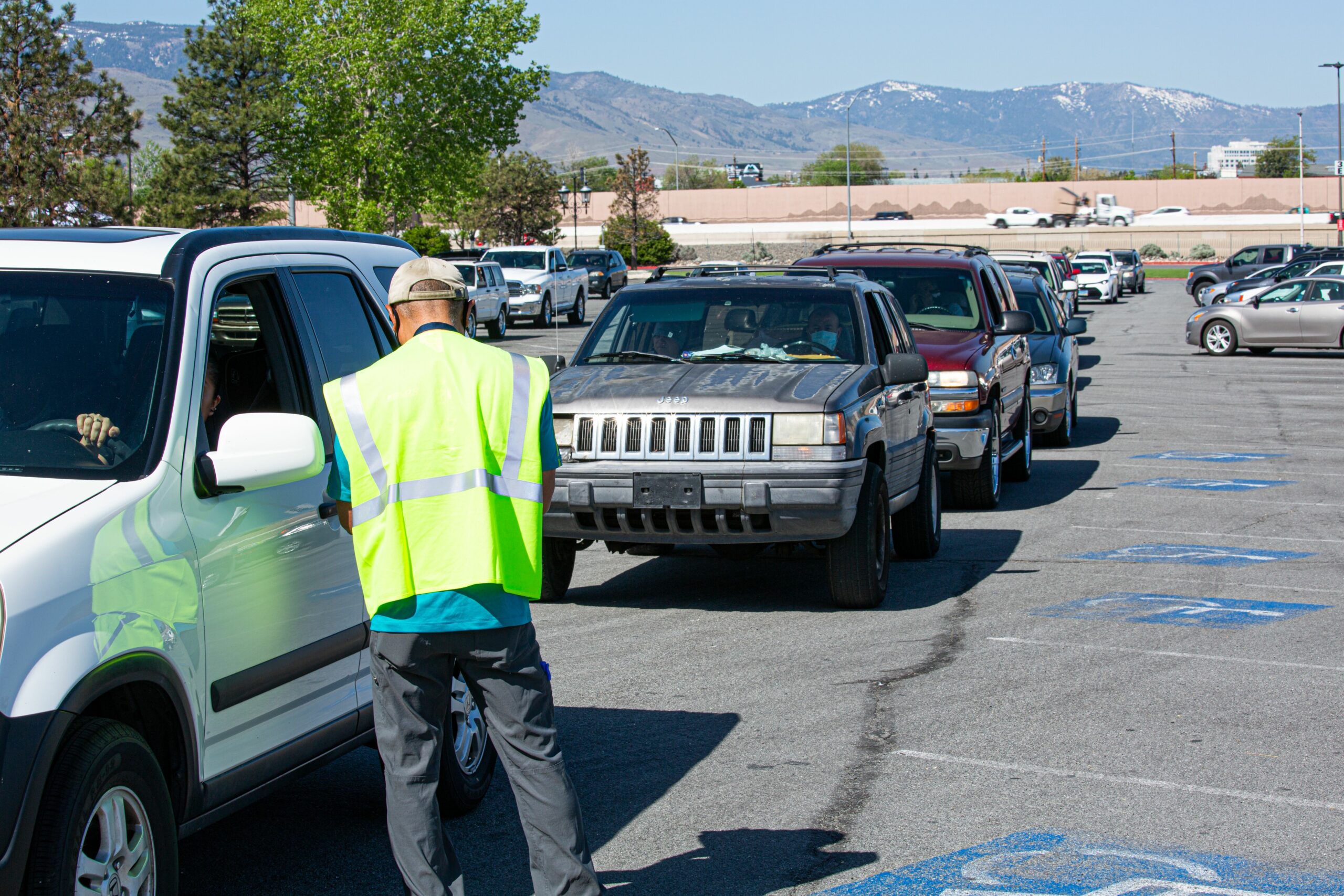 For a normal meal distribution event prior to the lockdown, the Food Bank of Northern Nevada served 150-200 families. On April 17, the organization served 980 families.

Before the pandemic 12.9 percent of Nevadans were identified as food insecure, meaning they lacked consistent access to nutritional food. The U.S. Department of Agriculture (USDA) hasn’t yet released an update to that number, but food banks statewide say they are observing drastic increases in the number of people in need of services.

In Southern Nevada, food insecurity rates were 12 percent before lockdown, and Scott estimates that this number could increase to 13 or 14 percent. An increase of 1 or 2 percent means an additional 50,000 to 75,000 people in Southern Nevada alone could face uncertainty about where their next meals will come from.

The 30 percent increase, from 1 to 1.3 million pounds of food served, is the equivalent of 250,000 extra meals distributed every week.

Three Square operates 43 emergency distribution sites as a part of a disaster response plan implemented on March 11. Since then, these drive thru sites have served over 6.5 million meals.

Just since the opening of the sites in March, the organization has seen a 67 percent increase in meals served. Food Bank of Northern Nevada has seen a similar trend throughout the past months of lockdown.

“We saw increases right away,” said Jocelyn Lantrip, a spokeswoman for Food Bank of Northern Nevada. “They’re just getting larger and larger.”

Nevada’s Aging and Disability Services Division has allocated $2.5 million in emergency funding to 19 partnering organizations from the Families First Coronavirus Response Act that is going toward feeding 9,500 seniors who weren’t previously receiving services.

Entirely new programs have been developed to try and get food to at-risk populations, such as Delivering with Dignity, which expanded its efforts to the Reno and Sparks area and has delivered 26,500 meals during its first five weeks of operation.

At a federal level, Supplemental Nutrition Assistance Program (SNAP) benefits have been expanded. As of March 23rd in Nevada, 15,047 people were being evaluated for SNAP benefits, compared to 7,638 on that date in 2019, and two thirds of those individuals had applied within that week.

As these numbers have increased, applying for benefits has also become more complicated as in-person operations cease and application and approval processes have moved online.

The state is now able to provide individuals with emergency supplemental benefits for up to two months. Additionally, paperwork and reapplication requirements have been waived and deadlines for processing case reviews have been extended.

“Collectively, these provisions have not only expanded benefits but allowed administrative processes to be streamlined to help ensure that demand is met, particularly as new applications are submitted,” Meredith Levine, director of economic policy at the Nevada-based Guinn Center for Policy Priorities, said in an email.

However, rural communities and low-income individuals are still left out as a result of the “digital divide.” According to The Guinn Center, approximately 8.8 percent of Nevada households do not have access to a computing device and 18.3 percent have no internet subscription.

“This is the ‘double digital divide.’ Data shows that rural areas in the state have insufficient broadband, and spotty cellular service,” Levine said. “In-person applications and interviews have shifted online. This has reduced some barriers, such as the submission of paperwork for continued benefits, but created other impediments, as some people may not have the necessary tools … to apply for benefits.”

In order to fully cover those in need, The Guinn Center recommends further action be taken.

“At a federal level, policymakers should consider increasing SNAP benefits,” Levine said. “A 15 percent increase was proposed — but not enacted — under the CARES Act.”

Levine also pointed to Pandemic EBT benefits as an option the state should seek out from the federal government. These are extra food benefits for children who are eligible for free or reduced-priced meals at school, and states such as California, Arizona, and New Mexico have already applied.

“Aside from policy changes,” Levine said, “it is important for community groups, non-profits, and small businesses, to the extent possible, reach out to vulnerable households to aid any individuals who may need SNAP but be unaware of eligibility changes or lack Internet access to secure those benefits.”

Some food producers are reaching out directly to residents in their communities.

Last week, Isidro Alves, the owner of Sand Hill Dairy in Fallon, posted on social media that his dairy would pass out gallons of milk to anyone who needed it. In an interview, Alves said the response was “overwhelming.” Residents came not only from Fallon but also from Carson City and Reno, both about an hour away. He estimated that about 600 cars came to pick up milk.

“They were thankful,” he said. “I got some private emails, and it was a big help for their families.”

Alves said that, as with other businesses, it was important to give back to those who have been hit hardest by the pandemic. With concerns about food shortages, he said people are worried.

“You open up social media,” he said. “We've got restaurants that are struggling to stay open and they're making meals for first responders. We've got distilleries [that are making hand sanitizer]."

“We're farmers,” he added. “We make milk. What can we do with our milk? We decided to give it back to our community. And we knew there were so many people struggling in our community.”

Across the country, the pandemic has created economic disruptions and health challenges for food producers, one that has rippled through the agriculture industry. Unlike many dairy producers, Alves has not had to dump milk because of decreased demand. He processes his product on-site. Still, prices have dropped as restaurants and schools have shut their doors.

Doug Busselman, executive vice president for the Nevada Farm Bureau, said one dairy in Southern Nevada has had to deal with dumping milk. Before the pandemic, they had been sending the milk to Las Vegas for processing en route to being distributed at schools. But he said the practice has not been as widespread in Nevada, compared to other states.

“We're probably not as bad off as other segments of the agriculture industry around the country, but we may also be looking at having our day of reckoning ahead of us," Busselman said.

That’s because the state produces different commodities. But he could foresee some issues down the line as farmers look to sell hay to dairy farmers and ranchers market their livestock.

Still, the supply chain is a concern for food banks. For instance, Food Bank of Northern Nevada has been seeing delays in receiving shipments of food.

“We still are receiving food donations from suppliers and manufacturers. That’s still happening probably on a smaller scale,” Lantrip said. “We’re having to purchase a lot of food for these emergency boxes. It’s taking longer than usual to get it.”

According to Scott, Three Square is facing a similar issue — fewer donations and longer wait times for purchases.

“It strictly comes down to freight availability and costs,” he said. “When there’s higher demand, the costs can grow rapidly.”

Three Square is also a lower priority for freight shipments than grocery stores, which are also experiencing shortages and are ordering more food as a result. It can take longer for food banks to receive freight when grocery stores are getting deliveries first.

Previously, the organization had rescued meals from resorts, redistributing untouched, flash-frozen meals when event organizers found themselves with more food than patrons. But with hotels closed and no longer ordering food, that source has been cut off. While banquet meals only made up 500,000 of the 55 million pounds of food served annually by the organization, what Scott says was really lost was the quality of food those meals provided clients with.

“What we miss from being able to rescue the food from there is the quality of the food,” Scott said. “In particular we were able to rescue a lot of meat proteins, and those are very hard otherwise for us to be able to source.”

Grocery store rescue, however, has remained a continuous source of supply for Three Square.

“In spite of the circumstances, shoppers will still pass over the blemished apple,” Scott said. “So, fortunately, that becomes available to us.”

Additionally, the organization has been able to make up for lost donations and delays with federal help through the Commodity Supplemental Food Program through the USDA, which distributes food and funding to organizations improving the health of low-income seniors. At the moment, Three Square obtains 1.4 million pounds of food a month through the program. By the end of the summer, Scott expects that number to reach 2 million pounds.

For Three Square, the most immediate concern for the future, even as the state enters the first phase of re-opening, is the rising heat in Southern Nevada. As summer approaches, and temperatures skyrocket, keeping perishable foods fresh at distribution sites will become difficult.

Hours have already been adjusted at many emergency sites to allow food to be distributed earlier in the day, and operations at these sites are becoming increasingly efficient.

“I think we have a routine established right now that we can maintain through much of the summer,” Scott said. “Heat will always be an issue for us.”

The organization is also concerned about how they will continue to operate in August if schools re-open normally. Prior to lockdown, the organization provided 18,000 meals per day to schools in Clark County.

When schools closed, that meal preparation stopped and Three Square suspended volunteering at the facility where they were prepared to comply with social distancing.

“Our challenge is to be able to box thousands and thousands of meals every single day in our kitchen and accomplish social distancing in a safe environment,” Scott said.

Even if the state is fully reopened by August, food banks still expect the increased need for their services to continue.

“We don’t know how long it’s going to go,” Lantrip said. “But, truth be told, if people are out of work for a certain amount of time, even when we open back up, we’re anticipating that the people will still need our help.”