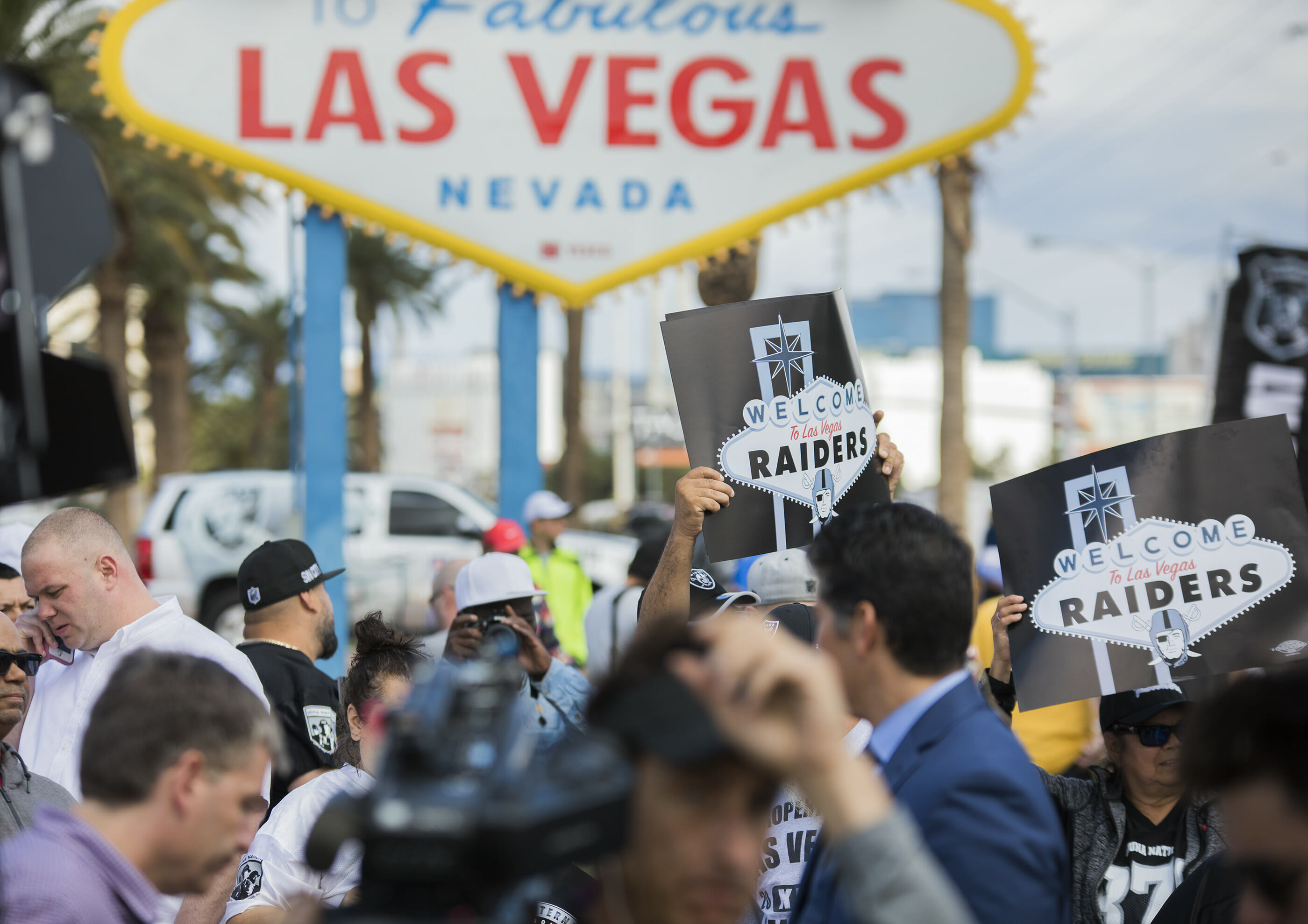 Two weeks after state lawmakers greenlighted a $750 million public-financing package to bring the Oakland Raiders to Las Vegas, a standing-room only crowd packed the Urban Chamber of Commerce.

Politicians and other key figures involved in the stadium deal intended the October gathering to be a celebratory affair. After all, state Sens. Aaron Ford and Kelvin Atkinson were unveiling components they said would be included in a forthcoming community benefits plan.

“Investing public money in a stadium requires a guarantee that the public reap significant benefits,” Ford said at the time.

The perks announced were fairly hefty. For instance, developers would use “reasonable best efforts” to hire locally for at least 50 percent of the jobs, with additional hiring goals to ensure participation from low-income residents, ethnic minorities, people with disabilities, veterans, ex-offenders and members of the LGBT community. They would also bolster workforce development programs and services for at-risk youth.

But an undertone of uncertainty permeated the event. Reports surfaced a day earlier indicating tensions between Raiders’ staff and casino mogul Sheldon Adelson, who had committed $650 million of his family’s fortune to the project.

Adelson’s right-hand man, Andy Abboud, brushed off the concern, but three months later, the billionaire removed himself from the project.

As for that community benefits plan: It still hasn’t seen the light of day.

Flocks of people. Too many vehicles. A slew of police officers.

A bogus flyer circulated throughout the community, which promised “pre-job recruitment signups,” sparked the chaotic scene in mid-July at the Clark County Government Center, where the Stadium Authority was meeting the same day. It wasn’t a coincidence.

In recent months, dozens of people have attended Stadium Authority meetings and bemoaned the absence of a community benefits plan. Chief among them has been Stanley Washington, who describes himself as a diversity advocate and has been a longtime activist for the historic West Las Vegas community.

Washington acknowledged he was behind the flyer but declined to discuss the matter. “We’re through with that episode,” he said.

But he didn’t have any qualms discussing his hope for the Raiders to sink roughly $100 million over time into the community — specifically, disadvantaged areas of the city with many black residents. He submitted his own proposed community benefits plan to the Stadium Authority that reflects those desires.

Washington has been adamant that even without the deep-pocketed Adelson in the mix, the community deserves tangible benefits that extend beyond the team’s mere presence in Southern Nevada.

“The bottom line — it’s about equity in participating in the benefits of this transaction,” he said.

Others generally agree that the community needs a benefits plan, but not everyone is convinced a dollar figure needs to be attached to it. The Laborers Local 872 made that point clear last weekend when the union, which has strongly supported the Raiders’ move to Las Vegas, threw a barbecue at Craig Ranch Regional Park.

The words on the backdrop of a stage: “Just build it baby!! No strings attached.”

Tommy White, the secretary-treasurer of the laborers union, said the Raiders shouldn’t be forced to shell out more money for the community benefits plan.

Aside from the $750 million public contribution, the team is responsible for covering the remaining cost for the estimated $1.9 billion stadium. Bank of America has agreed to provide the Raiders with a $600 million loan, replacing most of what Adelson pledged, on top of $200 million the team hopes to receive from the NFL’s G-4 loan program and an estimated $250 million from personal seat license sales. Additionally, the Raiders are investing $100 million in the project.

“I don’t believe the Raiders should be held with a ransom note,” said White, a member of the Stadium Authority who clarified that he was speaking as a union leader only.

White denied trying to torpedo any forthcoming community benefits plan or prevent minority participation on the project. He said the laborers union keeps detailed information about its workforce to ensure diversity.

The Raiders’ move to Las Vegas, he said, generates an automatic ripple effect that benefits the community in the form of 3,000 construction jobs and a minimum of 40 to 50 permanent jobs — not to mention other services the stadium will need and an expected increase in tourists.

“People just saw an opportunity here to take a run at the Raiders,” White said. “I don’t think they did it the right way. I still believe you get more with honey than you do with vinegar.”

Senate Majority Leader Aaron Ford, who has been working behind the scenes with the Raiders to craft the community benefits plan, has shown a draft to some organizations and key leaders involved in the project, several sources told The Nevada Independent.

Ford declined to comment on the plan or development process for this story.

Sonny Vinuya, president of the Las Vegas Asian Chamber of Commerce, said Ford’s draft included a smaller financial request from the Raiders — i.e., not $100 million as Washington suggested — that would go toward training and administrative costs. Vinuya discussed the draft with his board, which ultimately decided not to support the proposal.

“I want it to be more specific,” Vinuya said, referring to where the money would go. He thinks the Raiders’ relocation already benefits the community.

Shaundell Newsome, who sits on the Urban Chamber’s Board of Directors, said his understanding was that any dollar figure attached to the plan would help ensure its goals are met. But while much of the conversation has revolved around jobs, he pointed to other ways a plan could benefit local residents.

As a second-grader in Brooklyn, N.Y., Newsome scored tickets to a Yankees game after earning an “A” on his report card. It was the product of an agreement between the Major League Baseball team and his school district.

“I grabbed my dad, took three trains and got there,” Newsome, 49, said.

It’s not difficult to see why the plan has devolved into a philosophical debate.

The legislation that authorized a tax increase for the stadium project only mentions a “community benefits plan” three times in the 65-page bill. The vague language simply states that the developer partner and Stadium Events Company “shall develop” a plan that ensures the greatest possible participation by all segments of the community in the economic opportunities provided by the project. The bill also calls for the creation of a stadium community oversight committee to carry out that plan.

The public’s first glimpse of the community benefits plan could come in September.

Steve Hill, who chairs the Stadium Authority, said he’s pushing for a draft to be ready by the next board meeting.

“We’ve heard a lot from a whole bunch of different people,” he said. “Now we’re going to decide what the answer to all of those comments are.”

The big unknown: Will the community benefits plan contain a financial investment from the team?

Raiders President Marc Badain declined answering that question Thursday after the Stadium Authority meeting. “I’m not going to address that,” he said.

Raiders officials did reveal that a full-time staff member focused on community relations has been working in Southern Nevada for two months.

The Raider’s 2016 Community Report — a glossy book filled with photos — offers some insight as to what residents can expect when the team moves here. Last year, players volunteered at a food bank, attended a fashion show for breast cancer awareness, read with schoolchildren,  and visited a children’s hospital. The team also donated money for scholarships, provided Thanksgiving meals to needy families and gave bicycles to local children.

Those are just a few of the activities detailed in the report. The Raiders have not announced their plans for Las Vegas yet.

Whatever plan and activities emerge, Guzman said he’s grateful for the extra support in the community.

“The only way it could end badly is if the Raiders didn’t come,” he said.

Disclosure: The Laborers Union has donated to The Nevada Independent. You can see a full list of donors here.