As remote learning continues, so do efforts to find inactive students and bridge the digital divide 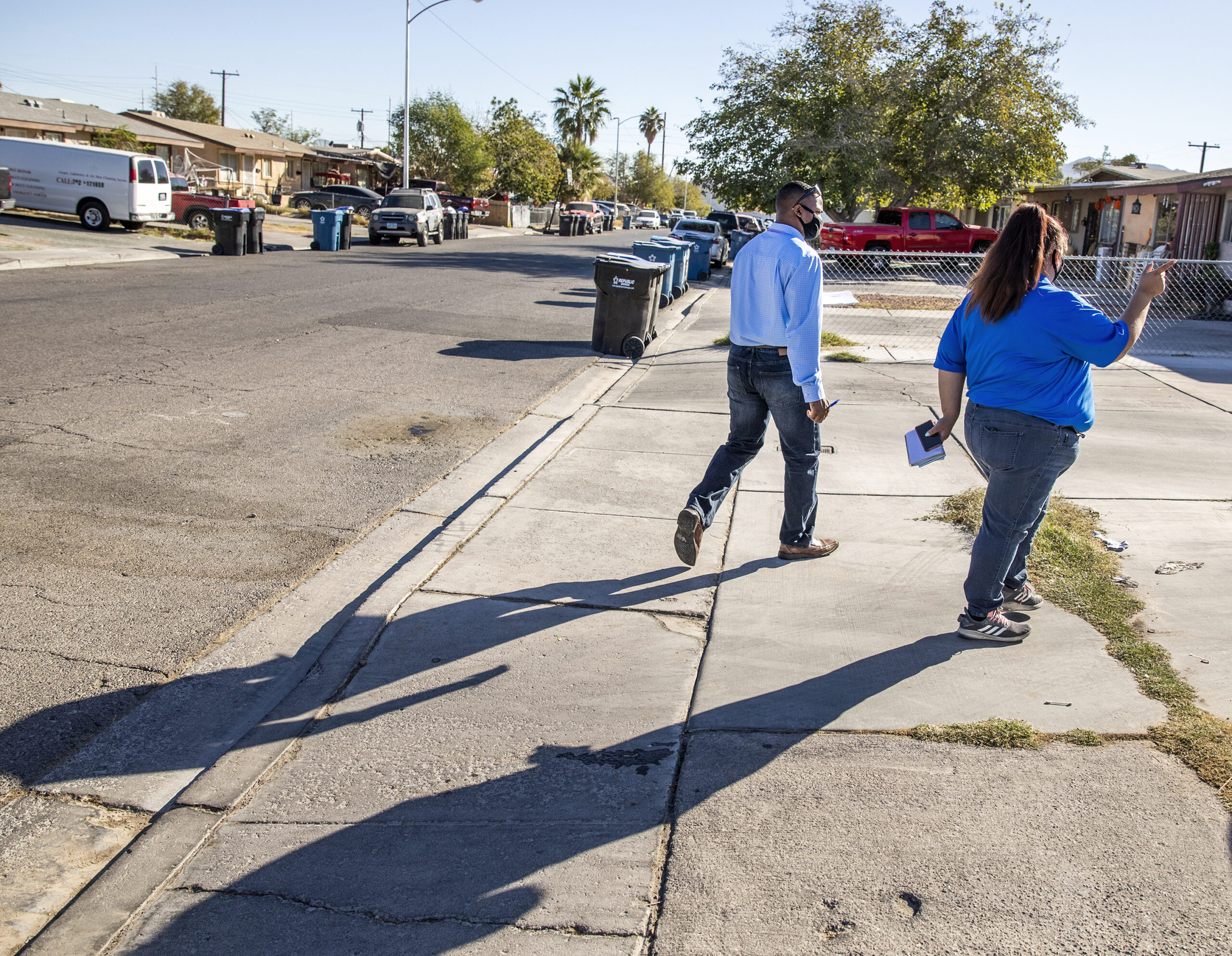 When Yunuen Rojas and Jake Lewis pulled up to the one-story home in the shadows of Interstate 15, they encountered a chain-link fence blocking the driveway.

It was another barrier on their quest to make contact with Clark County School District students who have been missing in action. These are children or teens whose families never filled out a technology survey over the summer and who haven’t been consistently logging into virtual classes, if at all. Another unknown: whether the students even have a Chromebook or internet.

As field agents with Connecting Kids, a public-private partnership born out of the pandemic, it’s Rojas and Lewis’ job to find out. Standing outside the house, Lewis dialed a parent phone number on record for this student’s parents.

“Still no answer,” he said.

The pair stuffed an informational paper and postcard into the fence. Then they consulted their spreadsheet full of addresses before moving on to the next stop.

The door-knocking represents the final stage of the coalition’s mission. In early August, when Connecting Kids hastily formed, the school district didn’t know the technology needs of 107,332 students, which is slightly more than a third of its population. Those students’ families had not returned a survey assessing computer and internet needs. With remote learning set to kick off just two weeks later, the six-figure number raised more than a few eyebrows.

Punam Mathur, executive director of the Elaine P. Wynn and Family Foundation — which has been heavily involved in the partnership — put it more bluntly, calling it a “monster problem.”

More than two months into the school year, the digital divide has been greatly reduced and so has the number of students who are essentially inactive in distance education. But the problem hasn’t been completely eradicated.

As of Friday morning, 309 Clark County students remained on the Connecting Kids roll call, which means they haven’t checked in three or more times during a school week and they have been unreachable by phone. The coalition also estimates 3,781 students need internet connectivity and 1,823 need a device, such as a laptop or Chromebook.

And that’s only the first half of the battle. The second is student engagement once they have connectivity and a device.

Whether in school board meetings, legislative hearings or business luncheons, there’s a common refrain uttered: Community partnerships are the key to improving the beleaguered Las Vegas-area school district. And while examples exist here or there, the Connecting Kids coalition arguably represents the largest endeavor to date.

“Honestly, I’ve never seen a partnership like this,” said Tami Hance-Lehr, chief executive officer of Communities In Schools, before rattling off the names of other organizations involved. Among them: The Public Education Foundation, Nevada COVID-19 Response, Relief and Recovery Task Force, Elaine P. Wynn and Family Foundation, The Harbor, the cities of North Las Vegas and Las Vegas and the Clark County School District.

Jim Murren, who chairs the COVID-19 Task Force, and Elaine Wynn, who also serves as president of the Nevada State Board of Education, announced the statewide coalition in mid-August after a warp-speed creation period. While the coalition’s mission extended across Nevada, the bulk of the work existed in Clark County.

“When the task force engaged, they operate with a very different set of operating practices, right?” Mathur said. “They are lightning fast. They are agile. They are not about ‘no.’ They're only about ‘How do we get to yes?’ And so that changed a lot.”

The coalition quickly stood up a virtual Family Support Center — run by Communities In Schools — that served as a third-party entity capable of signing up eligible families for subsidized internet through Cox Communications. As of Friday, the Family Support Center had processed 37,324 calls, connected 19,327 Clark County students with internet and referred 6,592 students for a device.

The coalition ran into some obstacles along the way, such as discovering a small mobile home park in North Las Vegas that was a complete connectivity desert, Mathur said. In the end, the coalition found a way for a local company to provide internet to that area through its microwave technology.

Local municipalities, buoyed by lessons learned in the spring, jumped on board as well. North Las Vegas, for instance, used $30,000 worth of CARES Act funding to hire contract workers — like Rojas and Lewis — who would help find children essentially missing in action. While North Las Vegas only accounts for roughly 10 percent of the county’s population, more than a third of students (36 percent) who didn’t participate during distance education in the spring lived there, city officials said.

“This is not acceptable to us, and I’m always the type of person who needs to know the why,” North Las Vegas Councilwoman Pamela Goynes-Brown said. “I think this is an awesome way to reach our residents and find out, you know, what their need is. Is it internet? Is it a device? Do they not have access to technology, period?”

Making contact with the remaining students on the roll call list was not an easy proposition, though. Rojas and Lewis knocked on many doors with no answers. One father, however, came into his driveway and said his children had been feeling ill the past week.

Rojas and Lewis confirmed the children had devices and internet and then gently reminded the father that his children should resume school as soon as they’re feeling better. If not, they’ll remain on the roll call list.

Then the two checked a spreadsheet to find their next destination.

Hance-Lehr said the coalition’s multi-faceted approach has been the key to whittling the roll call list and, ultimately, ensuring more kids are learning remotely. The coalition plans to wind down some operations as early as this coming Friday.

“It’s like a freeway,” she said. “We’re all in the same lane together trying to find these kids.”

Once students log on their computers, though, the trick is keeping them engaged. As weeks of distance learning have turned into months, some Clark County educators said that has become increasingly difficult.

Silvina Jover, a bilingual social studies teacher at Desert Pines High School, described student engagement as “definitely low” in recent weeks, but she attributes the dip to multiple factors. For starters, students may be logging in but not actually participating on the other side of the screen, Jover said. She knows some students are juggling jobs or the responsibility of watching younger siblings during school hours.

Plus, even if students have the internet, their connections aren’t always fast or strong enough to support various online learning tools that teachers have been using in a bid to make remote learning more fun and effective.

Given all the variables for why a student may or may not be participating, it has left Jover questioning her craft during pandemic-era teaching.

“From an educator’s perspective, it’s a little bit demoralizing,” she said. “It’s like, am I being an effective teacher?”

Monica Lang, principal of West Preparatory Academy, said the activation of breakout rooms in Google Meet sessions has helped boost participation. In breakout rooms, small groups of students can have two-way discussions about learning material or simply spend a few minutes catching up — which is a boon for their mental health.

Still, Lang acknowledged it can be an uphill battle each day, especially with stressful home situations amid high unemployment numbers.

“Students can choose at any time to close that laptop and walk away and have it on their phone and just leave it open,” she said. “They’re not necessarily there.”

The Clark County School Board of Trustees on Thursday will discuss and possibly vote on a transitional plan to some form of in-person instruction, although the details or timeline for doing so have not been revealed. At the same time, Nevada is experiencing — along with the rest of the nation — a surge in coronavirus cases.

The many uncertainties, combined with distance education fatigue and pandemic anxiety, make it that much more important for educators to prioritize building relationships with students, said Darlin Delgado, principal of Rancho High School.

“The most important thing I can say is ensure that everyone is safe and healthy,” she said. “At the end of the day, the kids are not going to remember every single assignment or standard that you taught, but they’re going to remember the support you gave them, how empathetic you were and how you treat them.”