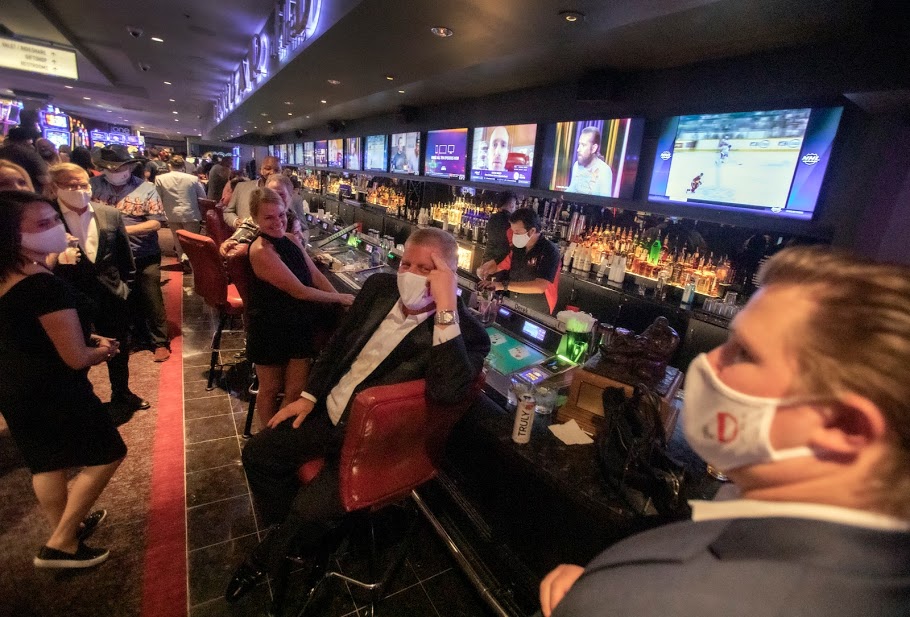 A COVID-19 mitigation task force on Thursday denied requests from the state’s two urban counties to reopen bars, expressing doubt about whether doing so would stem the tide of outbreaks tied to house parties and concern about a lack of buy-in from all local jurisdictions in Southern Nevada.

The task force additionally approved other action plans calling for minor changes in rural counties identified as at risk for the spread of COVID-19. Some of those changes include a ramp up of testing and additional enforcement of existing mitigation measures. They aren’t, however, closing any more businesses in counties across the state as cases continue to slowly decline but remain at a still-high level.

Caleb Cage, chair of the COVID-19 Mitigation and Management Task Force and the state’s COVID-19 response director, prefaced the county action plan discussion by emphasizing the seriousness of the problem and the need to balance protecting both human lives and economic livelihoods. COVID-19 — which, as of Thursday morning, has killed 1,172 people in Nevada — has become the third leading cause of death in the state, behind only cancer and heart disease.

“The decisions that we make today do have a direct impact,” Cage said. “I know that we will take this seriously.”

Early this month, Gov. Steve Sisolak announced a new, targeted approach to COVID-19 mitigation in counties across the state instead of the previous statewide, phase-based reopening plan. The new system requires counties to be evaluated based on three criteria to determine whether they are at elevated risk of disease transmission and, if they are, come up with action plans to reduce spread of the virus.

The task force heard and considered action plans designed to mitigate the spread of COVID-19 in six counties with elevated risk of disease transmission identified two weeks ago. Those counties include Clark, Washoe, Elko, Lander, Humboldt and Nye.

The state was slated to approve those plans last week but postponed action citing the need for further review.

State officials also flagged Churchill County as having an elevated risk of disease transmission because of an increased test positivity rate. As a result, Churchill County officials will begin the assessment process and, if the county’s data doesn’t trend in a positive direction, the task force will consider their mitigation plan next week.

Washoe County, which identified private gatherings as the primary source of disease transmission, requested that bars be allowed to reopen under stricter standards. The reasoning boiled down to enforcement: Bars would be a controlled environment where people could gather as opposed to house parties or backyard barbecues, where there’s no regulatory teeth for enforcement.

But the task force didn’t quite agree.

“I’m not yet convinced opening bars is the best solution to stop the spread of disease,” Cage said. “... I think there are other measures that could be in place in order to stop those large gatherings from happening.”

Kyra Morgan, the state’s biostatistician and a non-voting task force member, said the data suggests the bar closure has led to a decline in cases. If bars reopened at the same time as Washoe County schools, which began in-person instruction this week, she said it would be difficult to discern the source of potential case growth.

But Richard Whitley, director of the Department of Health and Human Services, compared keeping bars closed to an “abstinence model” and said “harm reduction” might best occur in a regulated environment.

The task force also voted to deny Clark County’s request to reopen bars, with Cage expressing concerns about whether all cities in Southern Nevada were on board with the county’s COVID-19 mitigation enforcement efforts. The city of Las Vegas, for instance, voted on Wednesday to scale back its compliance ambassador program, reducing the number of city employees working on the program from 65 to 12.

“I'm very pleased and impressed by Clark County and what they are doing with this, their leadership and coordinating, and I know we’ve got individual jurisdictional enforcement efforts that are great,” Cage said. “But, overall, having city support for the county's plan in this is not something I'm convinced of at this time.”

That means that, for the time being, bars will remain closed in both Washoe and Clark counties. The task force voted to continue existing mitigation efforts and perhaps revisit the bar question in a week or two.

Christopher Lake, executive director of community resilience for the Nevada Hospital Association, suggested the task force consider a phased-in approach in the future that would distinguish between alcohol-serving establishments such as bars, taverns, distilleries and wineries.

“I think those are the sorts of things that we need to work with the county on to address those, make those decisions,” Cage said.

The mitigation plans for the four other counties met relatively swift task force approval, although they came with some caveats.

Elko County submitted its action plan late Wednesday evening, but the plan basically amounted to a request for additional time. The task force, in turn, extended the existing restrictions, which include bars remaining closed and no more than six people at a table in restaurants, for the next week.

The task force approved Lander County’s plan, which focuses primarily on expanding community-based COVID-19 testing, without changes. County officials argued in their plan that Lander, which is about three hours east of Reno, was only on the state’s list of at-risk counties because of their low testing numbers.

Nye County, meanwhile, requested that bars, pubs, taverns, breweries, distilleries and wineries reopen everywhere except Pahrump. Officials noted many of the county’s cases were stemming from large family gatherings, prisons or jails and people who work in Las Vegas.

The task force agreed and approved Nye County’s mitigation plan, pointing out that 85 percent of the county’s residents live in Pahrump. The alcohol-serving establishments in the county’s smaller communities that are allowed to reopen, however, must follow social-distancing guidelines. That includes, among other things, operating at 50 percent capacity and not allowing people to congregate in the bar area.

In Humboldt County, the Fort McDermitt Reservation, which is about 70 miles north of Winnemucca, has recorded 72 coronavirus cases. About 50 remain active cases. Cage said county and state officials are working with tribal leaders to address the outbreak, though he noted that it’s a sovereign nation.

“What we’re trying to do is approach them very respectfully and with understanding and ensure that those needs are being met,” he said.

In approving Humboldt County’s action plan, the task force requested regular updates about outreach and coordination efforts with the Fort McDermitt Indian Reservation. Those cases on the reservation will continue to be monitored, but, moving forward, they won’t count against Humboldt County’s cases.

The task force also requested that the county provide additional information about their mitigation efforts and summarize their efforts to conduct outreach to the local community.