Buttigieg hoping to earn 'credibility' with black voters, capture support of those just tuning into the race 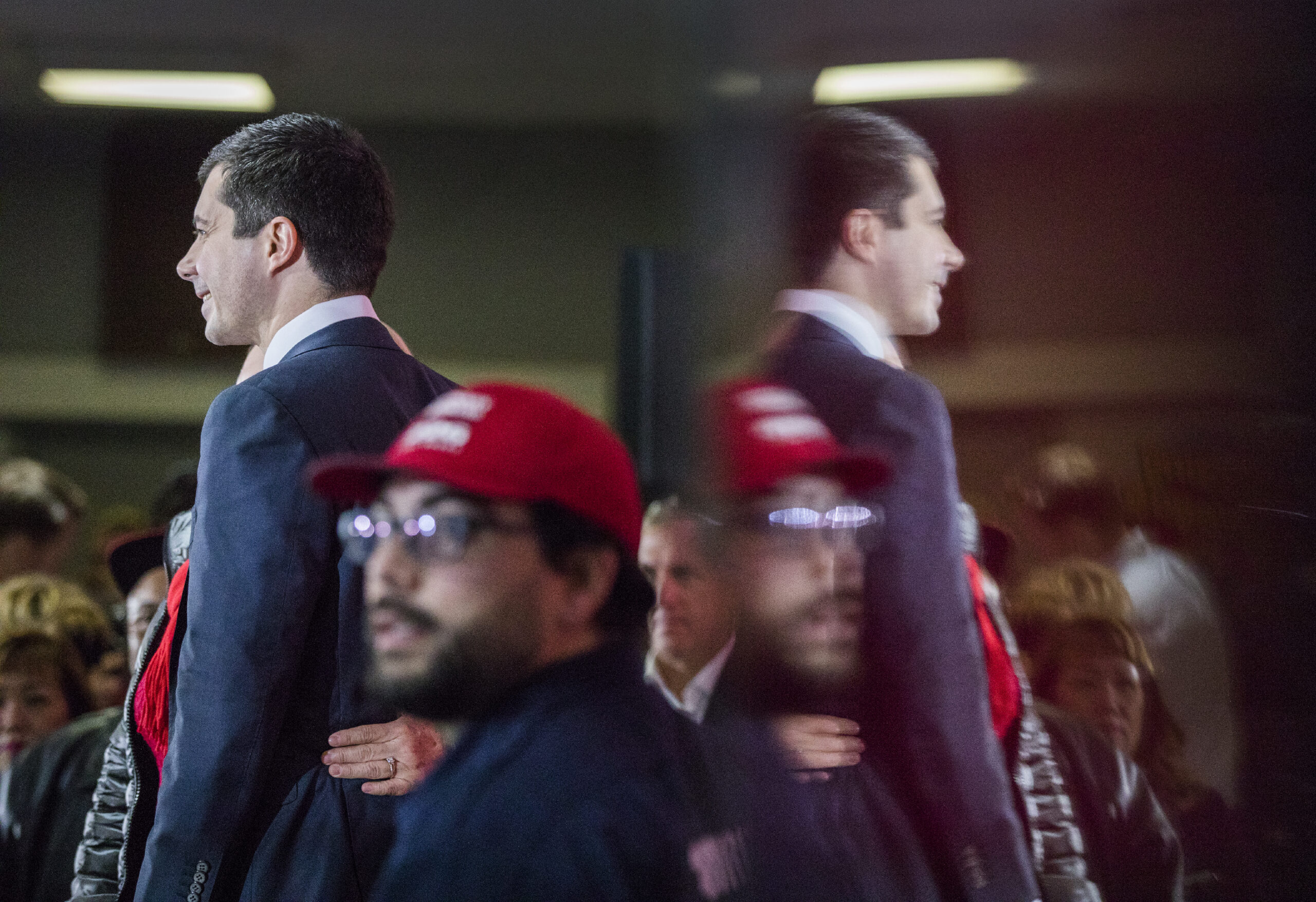 Former South Bend Mayor Pete Buttigieg has struggled with black voters in his bid to become the next president of the United States.

But it’s something he says has more to do with the fact that black voters don’t know him yet — not that they inherently don’t like him.

“Part of it is that, I think, when you're very new on the scene, you have to make sure that you earn a level of credibility with voters who have felt taken for granted, especially by my party,” Buttigieg said in an interview with The Nevada Independent on Sunday. “And often the best way to do that is to be around for years or decades. But that's not obviously where we're coming from.”

Buttigieg, who has had a meteoric rise since announcing his campaign in April, faced tough questions from black community leaders at an event in North Las Vegas last month over his ability to tackle the issue of race as president and, just this week, was dogged by Black Lives Matter protesters while visiting Los Angeles. A recent Washington Post/Ipsos poll found Buttigieg with the highest unfavorable rating among black voters of any of the top-tier Democratic candidates, and even a recent Fox News poll of Nevada found Buttigieg with less support among Hispanic and non-white voters than white ones.

“What we're finding is where people know me best, my support is best in black communities. We're leading in my own community, among non-white as well as white voters. In the Midwest it's stronger,” Buttigieg said. “In areas where I'm less known, the South and the West, we've got more work to do.”

Without the luxury of time on his side, Buttigieg is leaning on black activists, pastors, politicians, and others from South Bend to make the case for him. Some of them appear in a new ad he’s running in South Carolina, the fourth state to vote in the early nominating process where more than a quarter of residents are black. In Nevada, more than one in 10 residents are black.

“One of the things that we realized is there are a lot of folks who didn't know that the majority of black elected officials in South Bend, who are making endorsements in this race, are endorsing me,” Buttigieg said. “And we need to make sure we get folks out on the road talking about why.”

He took that appeal directly to some of Nevada’s most prominent black leaders Saturday night, speaking at a black awards ceremony at Sake Rok on the Las Vegas Strip.

“I come at the question of justice from the perspective of having been the mayor of a low-income, racially diverse city that has met some of the most ferocious challenges that can happen to people in the country,” Buttigieg said. “I come at it from the perspective of somebody whose parents taught me that my life's worth depends in no small measure on what I am doing to promote justice and wellbeing for others.”

Attorney General Aaron Ford, the first African American in the state to hold that post, called Buttigieg “a very good friend” and said that while he has not yet endorsed in the race, the former South Bend mayor “will be a good commander in chief, a great president for us.”

Buttigieg acknowledges that things in South Bend have not been perfect, citing, in particular, the issue of homelessness. Buttigieg has faced criticism for not doing enough to tackle the issue in his time as mayor.

“We've done more around homelessness then has happened in my city in a generation. But there were very high expectations among people too. Some folks saying, ‘Well, you haven't solved it,’ and that's true. We haven't solved it. No one has,” Buttigieg said. “But what we've done is meaningful, and we've got to make sure we communicate that out.”

And if he can’t win the support of the black community that way, he hopes to prove, simply, that he can win.

“That is a top consideration for black voters who've been surveyed, is the ability to beat Donald Trump, and the best way to quiet any concern about that is to do well somewhere, and of course our first chance to do that is in Iowa,” Buttigieg said. “I think that helps pave the way for what we need to do here in Nevada.”

Buttigieg believes there are long-term changes to be made to make the nominating process more diverse, something candidates have been talking more about this cycle given how white the first two early nominating states, Iowa and New Hampshire, are. But he declined to specify exactly what those changes might look like.

“For the future, we'll have to continue to find ways, not just in terms of the timing, but in terms of the process too, how can we make sure that caucus processes are inclusive, and take steps to really make sure that this is as democratic as it can be,” Buttigieg said. “I think the time for offering wisdom about the process is probably not when you're in the middle of competing under those terms.”

The short-term question, then, is exactly how well Buttigieg will fare in Iowa, particularly after a new Des Moines Register/CNN poll released Friday had him down several percentage points and behind Vermont Sen. Bernie Sanders and Massachusetts Sen. Elizabeth Warren. But Buttigieg shrugged off the results.

“Well, clearly, this is still a very dynamic race. There will be a lot of ups and downs,” he said. “There's certainly no campaign I would want to trade places with right now.”

A lot can change in the next three weeks, he said, nodding to the developing situation in the Middle East after a U.S. strike killed Iranian military leader Qassem Soleimani. Buttigieg, a Navy veteran who served in Afghanistan, said he believes voters are looking for a candidate “who’s not afraid to challenge the president’s brinkmanship and militarism,” pointing to his military experience as “a way to do that.”

“I think it adds a lot of value,” Buttigieg said. “For better, for worse, it has us focusing a lot right now on security, on safety, and on military issues.”

In Iowa and elsewhere, Buttigieg is hoping to capture the support of Democrats just tuning into the race since the New Year. On Saturday, Buttigieg hosted a rally at Silverado High School in Las Vegas attended by more than 900 people, more than two-thirds of them first time Buttigieg event attendees, according to his campaign.

“Not everybody's coming to our events, and we need to reach and draw more and more,” Buttigieg said. “I think the biggest opportunity is to continue pulling in people who maybe are on the fence about whether to caucus at all, especially because of the exhausting feeling of watching Washington right now and make sure that they see themselves in this process and realize the power that's in their hands.”

And in Nevada, Buttigieg is eyeing the support of a dark horse that he says could make a “huge” difference in the race — the politically powerful Culinary Union, which represents more than 60,000 hospitality workers across the state. The former South Bend mayor received a warm reception from roughly 300 union members who gathered to see him at a town hall Saturday morning and embraced his health care plan, which would establish a government-run health insurance plan but give people the choice whether to buy into it.

“So much of this campaign is about building the kinds of alliances that the Culinary workers do. They're a walking example of how workers can be politically empowered, and how you build a diverse, multiracial, multigenerational coalition to make things better for working people,” Buttigieg said. “That's exactly what our politics ought to look like, and so earning their support is very important in terms of just the spirit of this campaign.”