Cashless gaming and digital payments are moving into the casino world 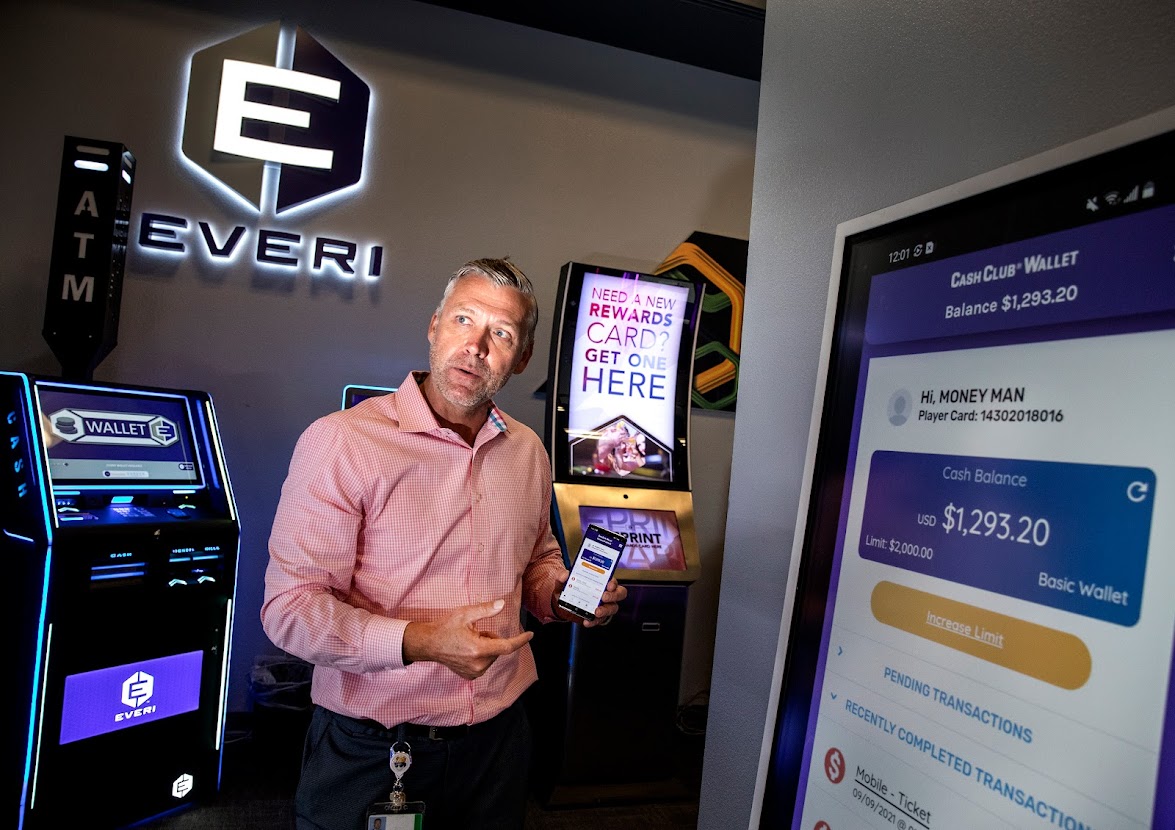 At the 2018 Global Gaming Expo, Everi Holdings had a hidden back room at the company’s trade show space with displays of prototype products for cashless gaming and digital payment systems.

Most of the major manufacturers conceal from the competition their games not ready for casino floors. Cashless technology falls into that category; a visitor needed an invitation from an Everi representative to enter.

The secret room wasn’t unusual. Most of the major manufacturers hide their newest products not ready for casino floors from the competition during the industry’s largest annual gathering.

Cashless technology was one of those products and a visitor needed an invite from an Everi representative to view the technology.

“We showed them this is what it looks like, and this is how we view the experience,” Everi Executive Vice President Darren Simmons said in a recent interview at the gaming equipment and financial technology provider’s Las Vegas headquarters. “Our customers were curious.”

The concepts displayed in secret three years ago will be front and center when the week-long G2E opens on Oct. 4 at the Sands Expo and Convention Center. Everi will no longer be alone in displaying a much wider suite of cashless gaming and digital payment products — heralding the transition of one of the final cash-dependent industries.

“Early adoption (of cashless gaming) is going to be a learning curve, but customers are very interested in what is being developed,” Intentional Game Technology Senior Vice President Ryan Reddy said.

In the two years since American Gaming Association CEO Bill Miller emphasized cashless gaming innovation as a priority technology endeavor for the casino industry, major manufacturers have responded by developing a wider array of products that are now being slowly rolled out across the U.S.

“The conversation we were having three or four years ago was really just wrapping our heads around what it exactly all meant,” Simmons said. “It’s truly e-commerce, which has been around for years. Online booking, online purchasing, that’s e-commerce. Moving this into the gaming industry is what we have long discussed.”

Most gaming equipment providers have developed or are in the process of creating mobile wallets — smartphone apps that store payment cards and other information in a digital format.

There are several components to cashless gaming, such as the backend technology used to securely transfer funds from a bank account or credit card into the wallet, and then back to an account or another form to use outside that casino, such as a debit card. Those funds are protected by FDIC rules and regulations.

“Everyone is working diligently to get operators and gaming regulators into the digital world faster than you would think,” said Aristocrat Technologies Global Vice President Boris Amegadjie.

COVID-19 also played a role in speeding up the transition to cashless transactions as casino operators looked to reduce the use of items that could be touched by multiple patrons as health and safety operating guidelines were put into place by gaming regulators.

In the mid-2000s, the casino industry buzzword of “server-based gaming” was used to describe computer systems that managed all games across a casino floor.  Similarly, cashless gaming and digital payment systems have to incorporate multiple games and product development by all manufacturers regardless of origin.

The gaming industry has adopted the term “omnichannel approach” to cashless technology. In addition to transferring funds, the digital systems are designed to allow customers to easily wager across all platforms — in-person slot machines and table games, sports betting and internet casino gaming in the four states where it is legal.

“We’re in the very early innings of the cashless rollout,” said Scientific Games Executive Vice President Matt Wilson. “In three to four years, more than half of the (casino) operators in the country will have some sort of omnichannel presence. We believe the future is building that digital wallet and allowing the customer to take that wallet and make transactions across all those platforms.”

“We think that number will grow,” he said.

Pandemic was a cashless accelerator

During his keynote address at G2E in October 2019, Miller challenged the gaming industry to expand the use of digital technology to replace cash by saying casinos shouldn’t be using the same basic payment methods used by flea markets.

Five months later, as casinos across the country began closing due to COVID-19, removing the use of cash from the gaming world became an industry-wide endeavor.

The AGA released research in June 2020 showing 57 percent of casino visitors said digital or contactless payments on the casino floor are important to them because of the COVID-19 pandemic. Another 59 percent of casino customers said they were less likely to use cash in their everyday lives out of coronavirus concerns.

“The pandemic has created a lot of horrible dynamics,” Miller said. “This is one of the dynamics that has been a major accelerator for a priority I had coming into this job. The health and safety of our customers and our employees coalesced into something that is really important for the industry.”

Miller said cash will always have a place in the casinos, but the industry is transforming into a place that allows customers “to decide how they want to transact.”

Cashless gaming has been active in Nevada since the state’s launch of mobile sports betting in 2010. Customers have to sign up at a casino and attach a funding account, such as a credit or debit card. The 2018 Supreme Court ruling on legalizing sports betting opened the rest of the U.S. to the activity, with online and mobile systems used in most of the 26 states that offer legalized sports betting.

IGT offers a cashless gaming system across several wagering channels in international markets, primarily for its online lottery in Europe. Reddy said the company has processed $1 billion in payments across its different gaming businesses since 2018, with more than half of those transactions coming in the last 12 months.

Gaming equipment providers and payment processing companies met with Nevada gaming regulators last year to discuss the use of cashless wagering technology and offered advice on potential regulations. The control board and Nevada Gaming Commission approved the use of digital payments in June.

A year later, the $4.3 billion Resorts World Las Vegas opened with a multi-tiered digital technology system to provide a cashless payment program for both gaming and non-gaming activities throughout the property. Five gaming technology providers created the system, which also marked the first time in the state that a gambler could digitally purchase chips from a table game dealer.

Miller said the newest Strip resort has become a live showroom for the potential of cashless gaming.

“Resorts World operators said they would have been doing an unbelievable disservice if they didn’t incorporate payment modernization,” Miller said. “They didn’t just build a casino. It is a modern version of a casino.”

Las Vegas-based Sightline Payments serves as the financial conduit at Resorts World, moving funds from a customer’s debit card, bank account, PayPal account or another source into the mobile wallet.

“Consumer adoption is going well, and we are continuing to work to make this a better experience for the customer,” said Sightline co-CEO Joe Pappano.

He said a cashless system provides safeguards for anti-money laundering rules and the background needed for “know you customer” requirements. Customers can also set withdrawal limits on their accounts.

“Cashless gaming technology has answered many of the initial questions raised,” Pappano said.

Other major gaming operators are moving forward with their own versions of cashless systems. Boyd Gaming recently completed a field trial test of a mobile wallet at the company’s Aliante Casino in North Las Vegas that began during the summer and was overseen by Nevada gaming regulators. Customers were able to make wagers through a digital payment system on the property’s slot machines, using mobile devices.

Boyd Gaming Chief Information Officer Blake Rampmaier said the system, which was created by Aristocrat Technologies and Sightline, has since been expanded to slot machines at the Cannery in North Las Vegas, as well as to Suncoast and Main Street Station in downtown Las Vegas. He expects the system will be live at Gold Coast and Orleans by early October.

Rampmaier said the company “quietly” approached loyal Aliante customers to try out the cashless system; the same approach is taking place at other casinos that are beginning to launch their own cashless wagering systems.

“We have had positive feedback from our customers,” he said, adding that Boyd would begin a marketing effort in Southern Nevada for the system over the next few months.

The company, which also launched cashless wagering at its casinos in Indiana and Pennsylvania, is awaiting approval from Nevada gaming regulators to begin a field trial for cashless wagering on Aliante’s table games.

Aristocrat Technologies Vice President Thomas Castleberry said Nevada “has taken a very detailed and measured approach to digital payments. Some jurisdictions are a little more aggressive than Nevada and have adopted (regulations) that allow this activity to be implemented much faster.”

Amegadjie said continual implementation at Boyd properties will spur increased use of cashless systems at other properties in Nevada.

“When operators start seeing the benefits of Boyd Pay, it will drive others to the technology as well,” he said.

“We’re not promoting our unified wallet to players just yet,” Wilson said. “We’re still trying to iron out the wrinkles. This is all still a work in progress.”

Everi, which also develops slot machines and offers casinos the technology for customer loyalty programs, was created nearly seven years ago through the merger of a cash access provider and a traditional slot machine developer.

The company provides cashless gaming capabilities at 11 casinos in four states, which is expected to increase through its partnership with Penn National Gaming. Everi’s mobile wallet interfaces with a casino management system from Las Vegas-based Acres Manufacturing.

Penn National operates 43 casinos in 20 states, including M Resort in Henderson and two casinos in Jackpot, Nevada near the Idaho border.

“We’re able to adapt for all jurisdictions,” Simmons said.

B Riley Securities gaming analyst David Bain said in a research note last week that investors are underestimating the importance of the digital wallets for companies such as Everi. He said the financial opportunity from “the casino fintech evolution (is) now underway.”

“While it’s too early to share specific metrics around cashless, Everi management did suggest higher volumes and ticket sizes for early adopters,” Jonas said. “Interestingly, Everi management had expected more hesitancy around the older cohort to use the mobile wallet, but adoption has been greater than expected.”

At Penn National’s new casino in York, roughly 100 miles west of Philadelphia, Bain said the company has seen increased use of mobile wallets after managers ran a promotion offering a free smartphone to high value customers who signed up for digital wallet.

Pappano, who spent 30 years in the payment processing industry before joining Las Vegas-based Sightline in July 2020, said cashless gaming companies have an opportunity to educate an industry “that is ripe and salivating over what will be the next new revenue driver that will help in accelerating the replacement cycle from a systems perspective.”

“I think the whole industry is going to be demonstrating how they can better leverage data,” Pappano said. “We have to show we can create more customer loyalty and how cashless solutions can create new revenue.”