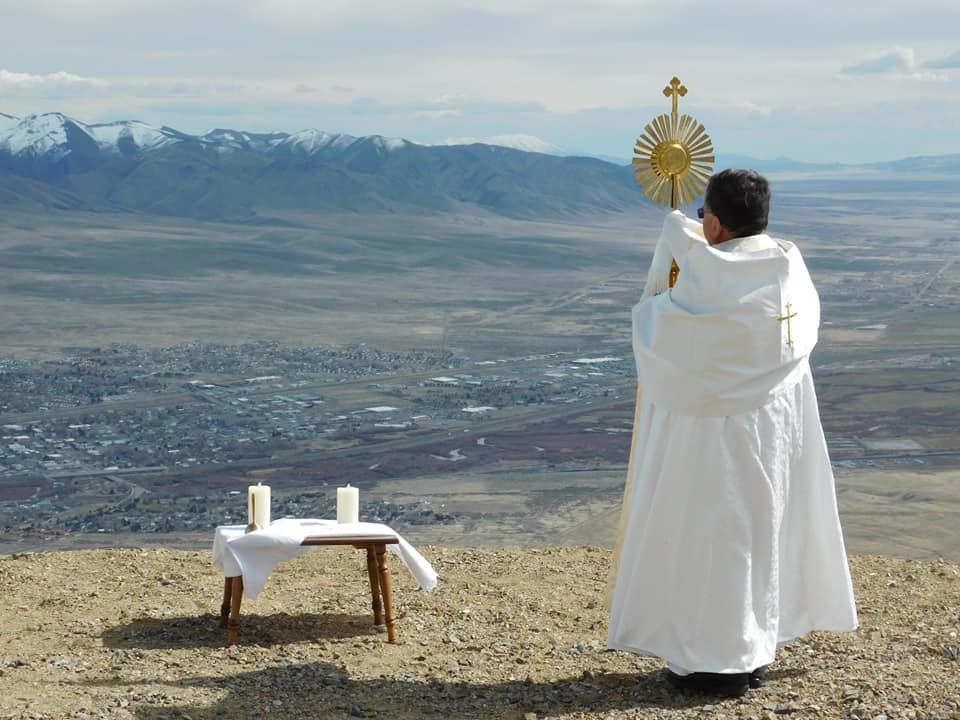 At 35 percent, Winnemucca has a greater share of Latino residents than Las Vegas — many drawn by jobs on ranches and alfalfa farms or in restaurants in a town that serves as a way station for travelers along I-80.

In his nine years at St. Paul’s Catholic Church, Mexico native Father Jose “Pepe” Soborzo has been holding masses in Spanish and English and takes pride in helping build bridges between different cultures. But his role has expanded in the past few weeks to an unofficial public health ambassador to Humboldt County’s Hispanic community, helping deliver urgent messages via Facebook Live to residents in the Nevada county hardest hit by coronavirus.

“Many times, the information about COVID-19 is more in English, and we know perfectly that in our Hispanic community, many people don’t feel confident in or understand English,” Soborzo said in an interview in Spanish with The Nevada Independent En Espanol. “I said ‘whatever you have to communicate to the community, I’m here to serve.’”

Winnemucca, which is roughly halfway between Reno and Elko, is the seat of a 17,000-person county that has 35 cases of coronavirus, including two that led to deaths. Its infection rate far exceeds that of more densely populated Washoe and Clark counties.

Health officials have tried to stress the dangerous and contagious nature of the virus in strongly worded statements in English and Spanish, but concerned that their message wasn’t cutting through to Spanish-speakers, they have lately been reaching out to faith leaders with predominantly Hispanic congregations. Last week, Soborzo broadcast through Facebook Live from the sanctuary with health advice in Spanish, while a white-coated Dr. Charles Stringham, the county health officer, delivered in English the hard truth that sometimes even interacting with loved ones can be a risk.

Stringham said it’s not just about sharing facts, but also about getting buy-in from people because the only real tool against the virus is changes in human behavior. And so the messenger matters.

“It’s not a public education program, but it’s a public motivation program,” he said. “I give a certain amount of credibility to the science side, but other people we know really provide the horsepower behind that message.”

The origins of Humboldt’s own outbreak can be traced to a large family gathering that helped spread the virus, health officials said. Gatherings resumed shortly after tragedy struck, which stunned Soborzo.

“I don’t know if they’re aware of the problem they have among family, but beyond that, that they’re infecting others — innocent people,” he said.

Soborzo worries his small town isn’t taking the virus seriously enough. He says a prayer for the employees as he drives past the Wal-Mart and sees the parking lot abuzz, and he hears reports from police on the night shift who say they see people having large gatherings in violation of the governor’s stay at home order.

The virus has been a reality in Soborzo’s workday for weeks — he offers up prayers during his homilies for those suffering from COVID-19 throughout the world and posts tips on Facebook about how parishioners can have a meaningful worship experience while watching mass from home (he encourages lighting candles and ignoring any messages that pop up during the virtual service).

“My message for Latinos in my community is that they take care,” he said, “and that above all they are attentive to all the messages of the authorities, of what the governor says, because we respect and follow the instructions of our government.”

He’s also taking his concerns up with a higher authority.

A few days before Easter, Soborzo climbed up to the peak of Winnemucca Mountain. Wearing a flowing white robe and laying out a small table with candles, he lifted a cross above the verdant valley far below and prayed for mercy from the coronavirus. Images of the dramatic tableau were widely shared on social media.

“It was a beautiful moment, very comforting for many … they felt less alone, they felt that the church was doing something for them,” he said. “We need to stay united and healthy, because we’re going to get out of this. If you take care of yourselves, you’re taking care of everyone.”