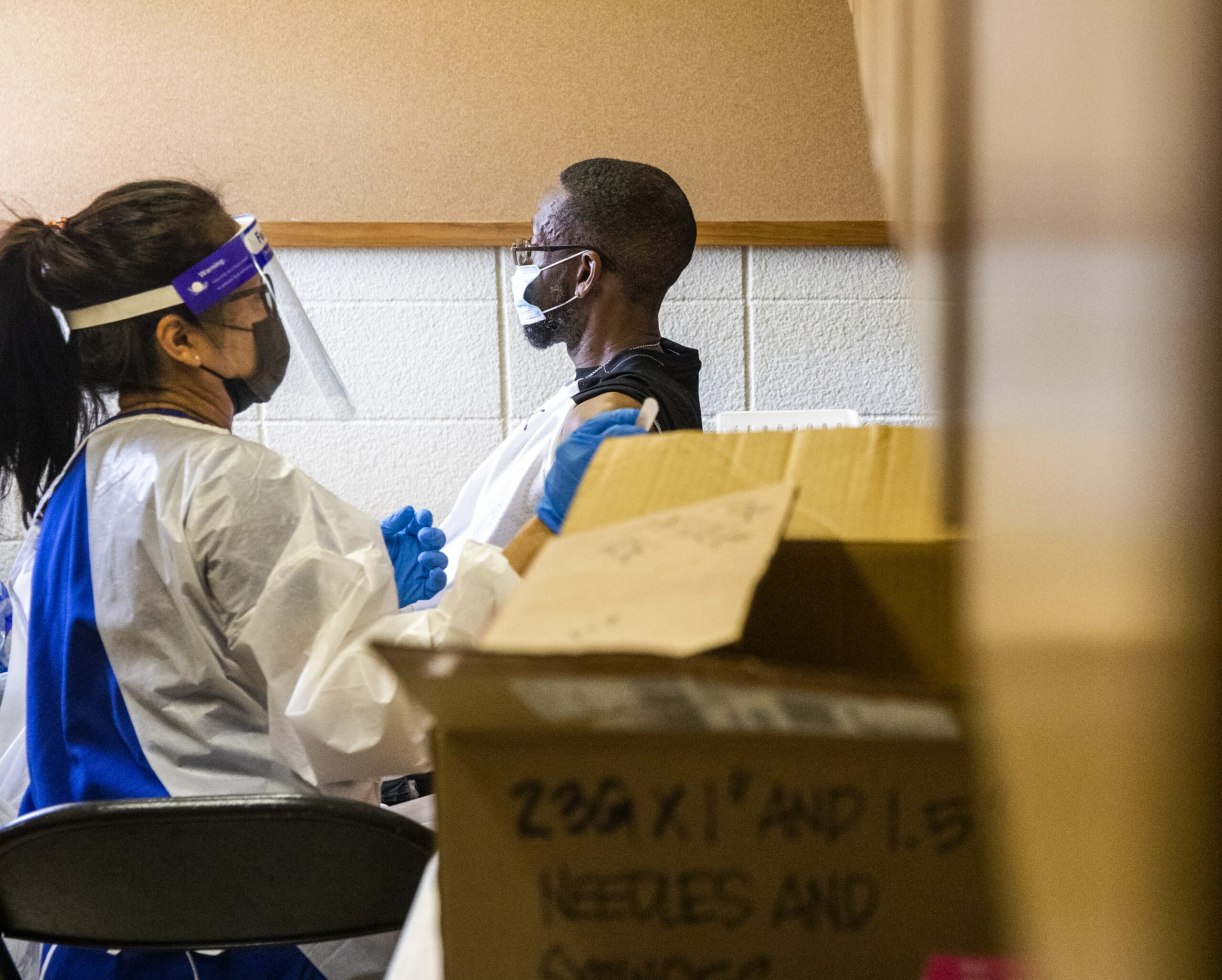 Welcome to the 56th installment of “Coronavirus Contextualized.”

Below, we take a look at the current state of the pandemic as Nevada finds itself in a worse situation than it was in at the same point last year — when cases and hospitalizations were declining following the summer 2020 case surge — but not yet as bad as the one it saw during the fall and winter months.

The average number of new daily reported COVID-19 cases started to climb again this week after a couple of weeks of fluctuations. As of Wednesday, 1,151 new cases were reported on average each day over the previous seven days. The highest point of the current wave so far is 1,160, which the state hit on Tuesday.

The virus, however, continues to affect the state unequally, contributing to some of the recent fluctuations seen in the state-level data. While cases remain high in Clark County and have fluctuated a bit in recent weeks, the numbers are somewhat down from where they were at the end of July. In Washoe County, meanwhile, cases continue to steadily increase.

The daily case average in Clark County was 751 as of Wednesday, down from a recent high of 917 on Aug. 1. In Washoe County, cases hit 257 on Wednesday, a record high for the current wave.

“We are in a situation where we have an increase in cases that is occurring now and a replay of what we were going through last fall with our hospitals filling up, people being sickened and dying,” Washoe County District Health Officer Kevin Dick said during a call with reporters this week.

Almost all other counties in the state are also seeing elevated case numbers.

According to the Nevada State Public Health Lab’s weekly lineage report, the Delta variant was responsible for 100 percent of sequenced COVID-19 cases over the last 14 days.

Since the beginning of the pandemic, there have been 384,135 COVID-19 cases confirmed statewide, meaning 1 in 8 Nevadans has tested positive for the virus. Nearly 9 percent of those cases, 33,571, have been diagnosed in the last month, and a little more than 2 percent, or 8,055 cases, have been reported in the last week.

As case numbers have continued to fluctuate, the statewide test positivity rate, which looks at the percentage of tests coming back positive out of the total tested, continues to steadily decrease

It is not possible to independently calculate the test positivity rate based on test encounters because the state only publicly reports the number of positive cases, not the number of positive test encounters. However, the state does provide this number, calculated as an average over a 14-day period with a seven-day lag. As of Tuesday, that number was 14.1 percent, down from a recent high of 16.4 percent on Aug. 13.

Since the beginning of the pandemic, more than 1.8 million people — 60 percent of Nevadans — have been tested for COVID-19, and there have been nearly 4 million individual testing encounters.

The pace of vaccine distribution in Nevada continues to remain relatively stable, though it has increased slightly over the last week.

As of Wednesday, about 8,200 vaccines were reported administered each day over the last seven days, up just slightly from 7,300 last week. The seven-day average has been fluctuating generally in the 7,000 range since the end of July until this week.

Since vaccinations started in December, more than 1.7 million people have received at least one dose of the COVID-19 vaccine and more than 1.4 million Nevadans have been fully vaccinated.

Nationally, Nevada ranks 32nd among the 50 states for percentage of its population fully vaccinated, at 47 percent, behind all of its neighbors except Idaho, which comes in at 47th.

Of the breakthrough hospitalizations, 67 percent had underlying conditions, 74 percent were those 65 years or older and 60 percent were men.

In Clark County, breakthrough cases are determined by matching COVID-19 test positivity records against vaccination records, Dr. Cassius Lockett, director of disease surveillance and control for the Southern Nevada Health District, told The Nevada Independent in an interview this week.

While the health district previously tracked breakthrough numbers based on interviews with cases, Lockett said health officials made the decision this month to instead match COVID-19 case records against vaccination records.

“We really felt like we needed to learn a whole lot more about the local epidemiology and what was happening so we can respond more thoroughly and develop more policy,” Lockett said.

Lockett cautioned against using the weekly breakthrough reports to try to determine whether an increasing percentage of vaccinated individuals are falling ill from or dying from the COVID-19 virus.

Once a new case, hospitalization or death is reported to the health district, it will be eventually checked against vaccination records to determine whether it should be counted as a breakthrough, but that process may not happen immediately.

Because of those lags, Lockett said the data sets should not be used to try to calculate week over week percentage changes in breakthrough cases, hospitalizations and deaths.

“Those numbers are changing all the time,” Lockett said.

The number of new COVID-19 deaths reported each day remains high, though fewer deaths have been reported in the last week compared to the previous week.

Over the last seven days, 128 new COVID-19 deaths have been reported across the state — down slightly from 139 last week — including:

Statewide COVID-19 hospitalizations remain high, though they continue to fluctuate day over day.

As was true with the county-level case data, hospitalization numbers reveal differing trends across the state, with the situation starting to improve in Southern Nevada and worsening in Northern Nevada.

“COVID-19 hospitalizations, among the unvaccinated, continue to increase in the northern part of the state while the south is experiencing marginal declines in hospitalizations and ICU occupancy,” the Nevada Hospital Association wrote in its weekly report.

The hospital association noted that hospitals and health departments are facing staffing challenges in all areas. It has placed Southern Nevada under “warning” status for health care worker shortages, while Northern Nevada and the rural counties are under “watch status.”

“Staffing shortages are no longer just in nursing; hospitals report shortages ranging from critical care nurses to dietary and EVS personnel,” the hospital association wrote. “Public health agencies are reporting shortages in contact tracing and recruitment for other positions.”

The hospital association also noted increasing instability in the supply chain and advised hospitals to monitor levels of critical items, including but not limited to COVID-specific items. The association attributed the supply chain disruptions to strict quarantine and isolation policies in China and outbreaks in manufacturing countries, many of which do not have a vaccinated workforce.

Some rural hospitals, meanwhile, have been pleading with their residents to get vaccinated. Northeastern Nevada Regional Hospital in Elko penned an open letter to the community this week warning of an “exponential” increase in COVID-19 patients to the hospital, most of them under the age of 50 and all of them unvaccinated.

“The burden this low vaccination rate has put on our system is unsustainable,” hospital officials wrote. “We are doing everything we can to manage the rapid increase in patients while also continuing to care for the ongoing, non-COVID-19 healthcare needs of our community. Despite these efforts, our system is strained and our people are tired.”

Ten counties are considered by the state to be at elevated risk for the spread of COVID-19 as of Wednesday: Washoe, Carson City, Douglas, Storey, Lyon, Churchill, Mineral, Elko, Nye and Clark.

As of Tuesday, when the state reevaluates CDC data for purposes of making changes to its masking guidance, all Nevada counties except Eureka were considered at “high” or “substantial” risk of transmission. Thirteen of those counties already have mask mandates in place, and a 14th, Storey County, will have one go into place on Friday after two weeks of high transmission.

Two other counties, Lander and Esmeralda, could have mask mandates go into effect on Sept. 3 if they continue to have “high” or “substantial” transmission next week.