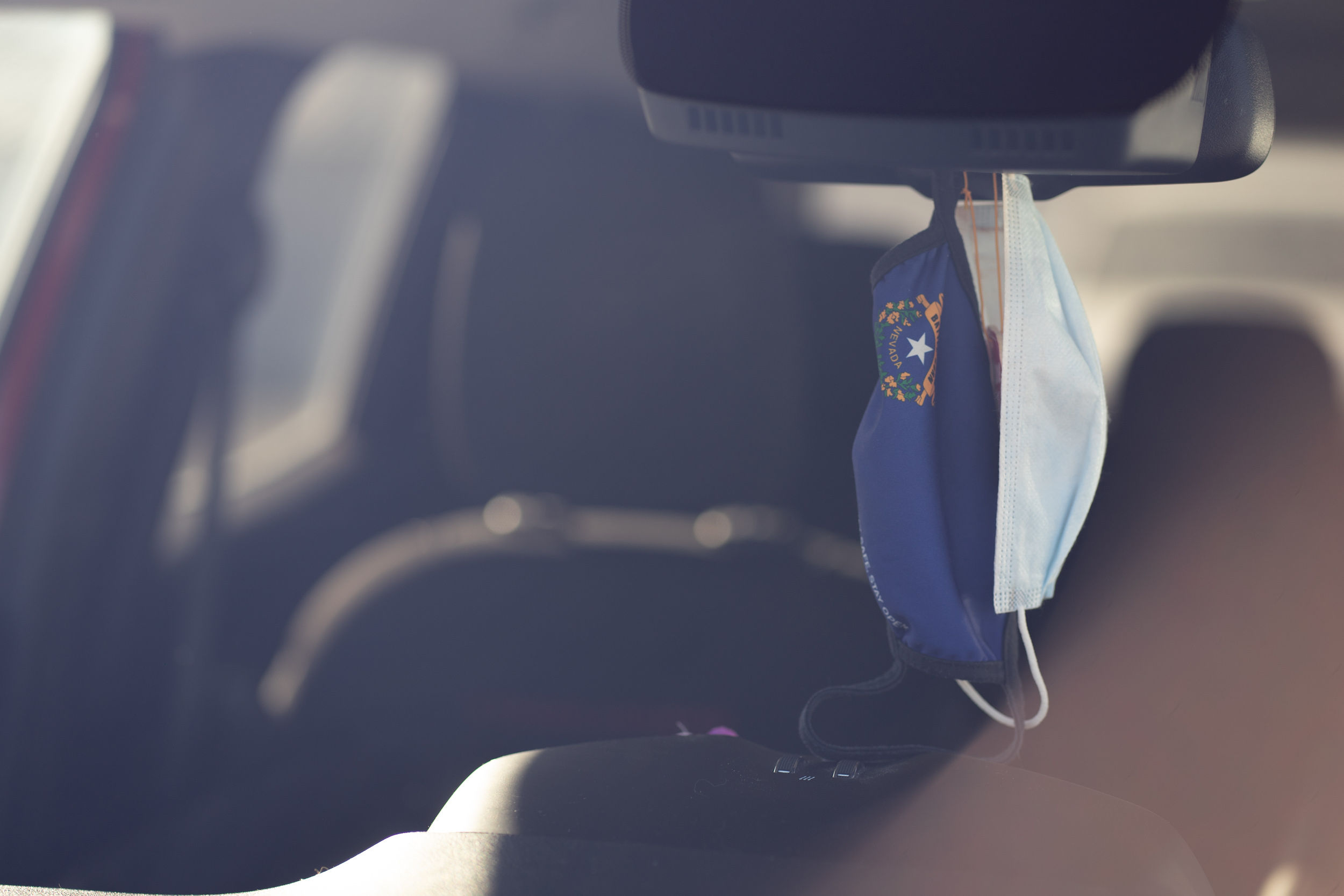 Welcome to the 62nd installment of “Coronavirus Contextualized.”

Below, we take a look at the latest COVID-19 trends as the situation continues to improve in urban Nevada and the rural counties remain hard hit.

Statewide case numbers continued to generally trend down this week, though changes in state data reporting and the lack of a state data dashboard update as of Thursday evening make recent patterns more difficult to discern.

As of Wednesday, 791 new cases were reported on average each day over the previous six days, down slightly from 830 last week and significantly down from the highest point of the current wave, 1,226, which the state hit on Sept. 13.

The Nevada Independent is using a six-day average through the weekend to omit Monday’s daily new reported case total, which included thousands of previously unreported cases — most of which were days, weeks or months old. That’s a result of the state’s decision to start reporting “probable” COVID-19 cases, identified through antigen tests, in addition to the previously reported “confirmed” cases, the result of gold-standard PCR tests.

While the Council of State and Territorial Epidemiologists recommends that states report confirmed and probable cases publicly, as Nevada is now starting to do, including Monday’s data would have significantly skewed this week’s case averages.

Because of the changes in reporting this week, the Independent will resume detailing trends in county-level data next week.

According to the Nevada State Public Health Lab’s weekly lineage report, the Delta variant was responsible for at least 94.2 percent of sequenced COVID-19 cases over the last 14 days. (Not all COVID-19 samples are pulled aside for genetic sequencing, though sequenced cases are used to extrapolate a variant’s prevalence in the overall population.)

Since the beginning of the pandemic, there have been 434,754 COVID-19 cases confirmed statewide, meaning 1 in 7 Nevadans has tested positive for the virus.

It is not possible to independently calculate the test positivity rate based on test encounters because the state only publicly reports the number of positive cases, not the number of positive test encounters. However, the state does provide this number, calculated as an average over a 14-day period with a seven-day lag. As of Tuesday, that number was 8.5 percent, down significantly from the 10.3 percent we reported in last week’s edition of “Coronavirus Contextualized.” Because of the state’s decision to start reporting the results of antigen test results, updated data now show last week’s positivity rate at 9.4 percent.

Since the beginning of the pandemic, more than 2.1 million people — nearly 69 percent of Nevadans — have been tested for COVID-19, and there have been nearly 5 million individual testing encounters.

State vaccine distribution numbers remain relatively steady, though they ticked slightly up this week, the result of two days of high reported vaccination totals on Sunday and Monday.

As of Wednesday, about 8,000 vaccines were reported administered each day over the last seven days, up from 6,300 last week.

Since vaccinations started in December, nearly 1.9 million people have received at least one dose of the COVID-19 vaccine and nearly 1.6 million Nevadans have been fully vaccinated.

State officials, during a Thursday press conference, highlighted their work on the “get out the vaccine” effort this summer with the assistance of surge teams provided by the Federal Emergency Management Administration (FEMA). Vaccination teams made up of state and federal representatives and local organizations canvassed 21 ZIP codes in Southern Nevada, held more than 280 vaccination and outreach events and distributed more than 300,000 pieces of informational literature about the vaccine in Southern Nevada, Gov. Steve Sisolak said.

“I am so grateful to the federal government for making these FEMA teams available and accessible to our state, and I'm even more grateful to the organizations in Nevada that stepped up and helped the search teams accomplish their mission,” Sisolak said.

“That means 21 percent more of the Nevadans in that ZIP code chose to protect themselves from COVID during this mission,” Luce said.

Among the counties, Carson City continues to have the highest percentage of residents fully vaccinated against COVID-19 at 58.1 percent, followed by Washoe County at 55.2 percent, Douglas County at 49.9 percent and Clark County at 46.6 percent. Tiny Storey County has still vaccinated the least, with only 17.5 percent of its residents partially or fully vaccinated.

Nationally, Nevada ranks 32nd among the 50 states for percentage of its population fully vaccinated, behind all of its neighbors except Idaho, which ranks 48th.

In Washoe County, there have been 3,561 breakthrough cases as of Thursday, representing 1.35 percent of fully vaccinated people in the county.

Southern Nevada Health District data show that breakthrough cases represented about a fifth of cases in Clark County in September. Fully vaccinated people made up 21.4 percent of cases last month, compared to 78.6 percent for unvaccinated people.

The number of new COVID-19 deaths reported on average each day remains high, though slightly down from last week.

Over the last seven days, 139 new COVID-19 deaths have been reported across the state — down from 159 last week — including:

The number of people hospitalized with COVID-19 statewide continues to decrease.

Hospitalization numbers have continued to decrease in Clark and Washoe counties while rural Nevada continues to see high numbers of hospitalizations.

“Clark County and northern Nevada are seeing fewer COVID-19 hospitalizations indicating that the state has peaked and has crested the current wave of illness,” the Nevada Hospital Association wrote in its weekly report. “Rural Nevada continues to be hard hit, with most staffed rural ICU beds at 100% occupancy.”

Clark, Pershing and White Pine remain the only counties not to be considered by the state as at elevated risk for the spread of COVID-19.

All Nevada counties remain flagged for having high case rates, though Clark, Pershing and White Pine are not flagged for either of the other two metrics.

As of Tuesday, all Nevada counties except Lincoln were considered at “high” risk of transmission. All counties remain subject to universal indoor masking precautions for both vaccinated and unvaccinated individuals for now.

Lincoln, which was deemed to have “low” transmission this week, could have its mask mandate lifted on Oct. 15 for vaccinated individuals if it remains at “low” or “moderate” transmission next week.