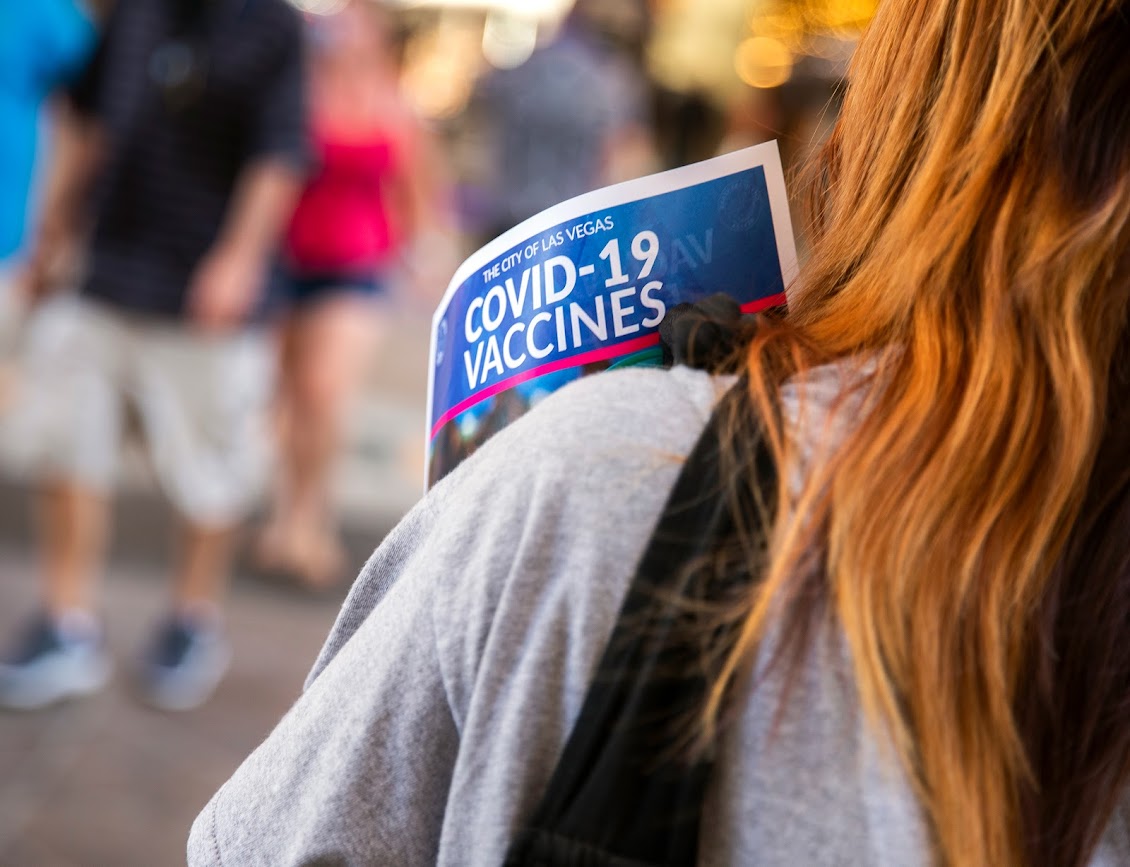 Welcome to the 63rd installment of “Coronavirus Contextualized.”

Below, we take a look at how Nevada is continuing to recover from its summer COVID-19 wave as the effort to administer booster shots to Nevada’s most at-risk individuals continues. While booster doses of the Pfizer vaccine have already been approved and are being administered in Nevada, an advisory panel to the Food and Drug Administration recommended on Thursday that Moderna booster shots also be given.

Statewide case numbers were slightly up this week from the previous week, though they appear to still be on an overall downward trend.

As of Thursday, 709 new cases were reported on average each day over the previous six days, up slightly from 660 on Sunday but still significantly down from the highest point of the current wave, 1,226, which the state hit on Sept. 13.

Ellie Graeden, founder and CEO of Talus Analytics and an adjunct faculty member at Georgetown University’s Center for Global Health Science and Security, said on a press call this week that most models agree that cases will continue to decline into the fall both in Nevada and nationally, so long as mask usage and vaccinations continue at current rates and barring the emergence of a new, more transmissible variant.

“Nationally, one model predicts a continuous decline in cases until March 2022, and another predicts that cases will rise back to near current levels by January 2022,” said Graeden, who has been consulting with the state on its COVID-19 response. “This sort of range in modeling is relatively common but gives us an indication of where we expect the pandemic to head next.”

In Clark County, which was hit early and hard by the latest wave of the virus, cases continue to decrease, hitting a seven-day average of 437 on Thursday. That’s down from 490 last week and significantly down from 917 on Aug. 1, the highest point of the current wave.

Cases also appear to finally be trending down in Washoe County, which was hit later by the current wave of the virus. After hitting a high point of 304 on Sept. 15, cases have been steadily decreasing, hitting 93 on Thursday.

Washoe County’s case rate — which at the peak of the current wave was more than double Clark County’s, when adjusted for population size — is now about equal to Clark’s. As of Thursday, Clark County was seeing 19 cases reported per 100,000 residents each day over the previous seven days, only slightly less than the 20 Washoe County was seeing. The case rate in the other 15 counties continues to be significantly higher, 52.

According to the Nevada State Public Health Lab’s weekly lineage report, the Delta variant was responsible for at least 88.9 percent of sequenced COVID-19 cases over the last 14 days. (Not all COVID-19 samples are pulled aside for genetic sequencing, though sequenced cases are used to extrapolate a variant’s prevalence in the overall population.)

Since the beginning of the pandemic, there have been 440,500 COVID-19 cases confirmed statewide, meaning 1 in 7 Nevadans has tested positive for the virus. A little less than 8 percent of those cases, 34,288, have been diagnosed in the last month, and a little more than 1 percent, or 4,963 cases, have been reported in the last week.

As of Tuesday, that number was 7.9 percent, down from the 8.4 percent last week. Still, the state’s test positivity rate remains above the World Health Organization’s recommended 5 percent threshold.

Since the beginning of the pandemic, more than 2.1 million people — nearly 70 percent of Nevadans — have been tested for COVID-19, and there have been more than 5 million individual testing encounters.

State vaccine distribution numbers have fallen to slightly above where they were a couple of weeks ago after a brief uptick last week.

As of Thursday, about 7,000 vaccines were reported administered each day over the last seven days, down from a high of 9,500 on Saturday and slightly above where it was two weeks ago at 6,300.

Since vaccinations started in December, more than 1.9 million people have received at least one dose of the COVID-19 vaccine and more than 1.6 million Nevadans have been fully vaccinated.

Nationally, Nevada ranks 32nd among the 50 states for percentage of its population fully vaccinated, behind all of its neighbors except Idaho, which ranks 48th.

In Washoe County, there have been 3,561 breakthrough cases as of Thursday, representing 1.37 percent of fully vaccinated people in the county. Those numbers have also not been updated since last week.

Southern Nevada Health District data show that breakthrough cases represented about a fifth of cases in Clark County in September. Fully vaccinated people made up 21.4 percent of cases last month, compared to 78.6 percent for unvaccinated people.

The number of new COVID-19 deaths reported on average each day remains high, though it continues to fluctuate.

Over the last seven days, 134 new COVID-19 deaths have been reported across the state — slightly down from 139 last week — including:

The number of people hospitalized with COVID-19 continues to decrease statewide, reflecting decreases in northern, southern and rural parts of the state.

Joan Hall, president of Nevada Rural Hospital Partners, which represents rural hospitals across the state, said during a press call this week that hospital capacity issues continue to strain facilities in the most remote parts of the state, though problems are not as widespread as they once were. However, she said that ICU capacity remains at 100 percent in most rural hospitals.

“Our hospitals are rallying for their communities, for the community's health and safety,” Hall said.

As the state continues to recover from this recent COVID-19 wave, fewer counties remain at elevated risk for COVID-19, according to the state’s dashboard. As of Thursday, Washoe, Douglas, Lyon, Churchill, Mineral, Nye, Lander, Humboldt and Elko counties were flagged.

All Nevada counties do, however, remain flagged for having high case rates.

As of Wednesday, all Nevada counties except Esmeralda and White Pine were considered at “high” risk of transmission. All counties remain subject to universal indoor masking precautions for both vaccinated and unvaccinated individuals for now.