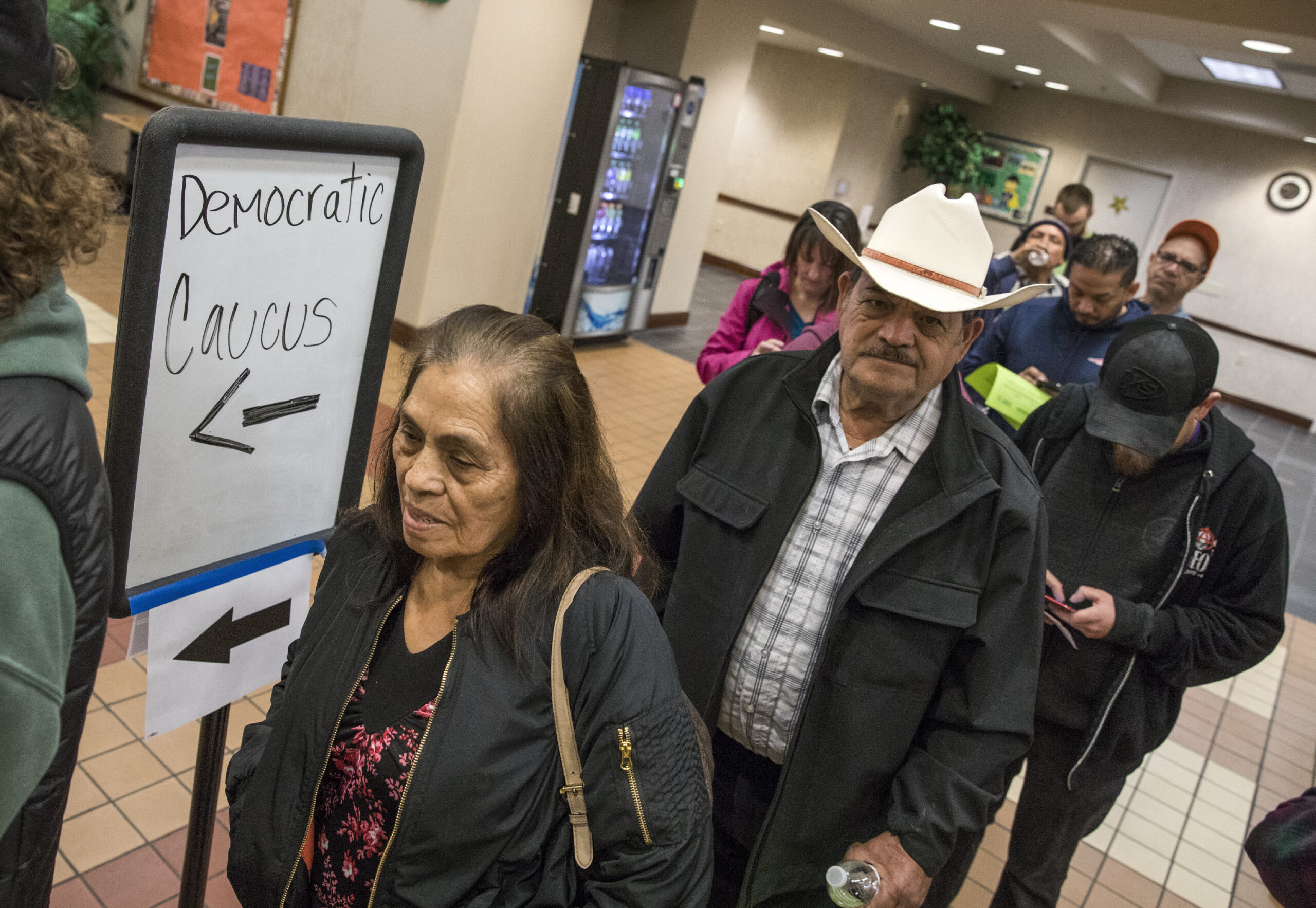 In Nevada’s high-profile races for governor and U.S. Senate, Democratic incumbents Gov. Steve Sisolak and Sen. Catherine Cortez Masto hold narrow leads over their Republican challengers, according to a new AARP-commissioned poll focused on older and Hispanic voters and shared with The Nevada Independent.

In the Senate race, Cortez Masto leads Republican nominee and former Attorney General Adam Laxalt by less than 4 points (44 percent to 40 percent) — within the poll’s margin of error. In the gubernatorial race, Sisolak holds a 3-point lead over Clark County Sheriff Joe Lombardo (41 percent to 38 percent).

Despite those slim leads, the poll revealed shrinking margins of support from Hispanic voters for both Cortez Masto and Sisolak, who both relied heavily on the state’s Democratic-leaning Latino voting bloc during their most recent electoral wins.

Polling was conducted by Fabrizio Ward and Impact Research between Aug. 16-24 on behalf of AARP, the nation's largest nonprofit representing Americans 50 and older. Pollsters interviewed 1,332 likely Nevada voters, including an oversample of 550 likely voters over the age of 50 and an additional oversample of 282 Hispanic voters over the age of 50. Results for the entire sample were weighted to reflect the state’s electoral demographics.

Pollsters Tony Fabrizio, who conducted polling for former President Donald Trump in 2016, and Matt Hogan with Impact Research, who has polled for Democratic presidential nominees in the past four election cycles, highlighted the significance of those oversampled groups, given the key role Hispanic voters have played in recent Nevada elections.

“We're basically seeing, nationally, Latino voters moving away from Democrats,” Hogan said. “We saw it from 2018 to 2020, and we've seen it continue from 2020 to now … We're seeing the trend here in Nevada.”

The 50-plus voting bloc oversampled in the poll is also crucial in Nevada elections, with voters in the group typically making up more than half of the state’s electors.

Fabrizio predicted that if the election were held today, Sisolak and Cortez Masto would both lose — owing to their underwater favorability, a Republican lean among undecided voters, and unfavorable national conditions including persistent inflation and President Joe Biden’s unpopularity. Hogan, on the other hand, said the “story of this poll” was that the Democratic incumbents are “overcoming that challenging … political environment” and keeping the race close.

One thing the pollsters, who work on opposite sides of the political spectrum, agreed on?

“This is going to be a barnburner all the way to the end,” Fabrizio said.

Interviews for the poll were conducted via landline, cell phone and SMS-to-web, and offered in English and Spanish. The poll has a 4.4 percent margin of error.

Hispanic voters shifting away from Democrats

During Cortez Masto’s 2016 U.S. Senate victory and Sisolak’s 2018 gubernatorial win, both candidates trounced their Republican opponents among Latino voters in Nevada, with their leads easily clearing 30 points, according to exit poll data.

But the poll results indicated both candidates could be facing severely shrunken support among the state’s Hispanic voters.

Hispanic voters preferred Cortez Masto, the nation’s first Latina senator, to Laxalt by a margin of 11 points, and Sisolak over Lombardo by 14 points. Among Hispanic voters over the age of 50, those leads dropped to 9 points each.

Both pollsters noted that Cortez Masto was viewed more favorably by Hispanic voters over the age of 50 than any other state or national figure polled, but Fabrizio said it may be not enough to overcome the overall demographic shift of that voter base away from Democrats in recent election cycles.

“I think the notion that Democrats are going to win Latinos here by 65-35 — maybe something along the lines that you saw in 2018 — it's just not going to be the case,” he said. “Those numbers have trended away and will continue, hopefully, to trend away. And so while she'll do a little bit better, she's still going to have to fight for them.”

But Fabrizio and Hogan disagreed on which Democratic incumbent was performing better with Hispanic voters, with Hogan highlighting that Cortez Masto had a slightly worse favorability rating in that group than Sisolak.

Other polling on Nevada’s Latino voters this cycle has indicated stronger support for the Democratic incumbents, including a May poll from the left-leaning Future Majority, which found Cortez Masto leading Laxalt by 38 points among Hispanic likely voters in Nevada.

In the tight race for governor, a plurality of voters 50 and older identified economic issues as their top concern, including 24 percent who selected “inflation and rising prices” and 11 percent who picked “jobs and the economy.” The next most commonly identified issues were immigration and border security, and election security, at 9 percent each.

In the Senate race, fewer voters over the age of 50 identified the economy as a key concern, with 22 percent picking the economy or inflation as a top issue. Thirteen percent identified “taxes, government spending and debt” as their top issue, followed by Social Security and Medicare at 12 percent.

Abortion was further down the list of priorities — only 7 percent of voters over the age of 50 said it was the most important issue in decking their vote for Senate. Pollsters also asked which issue was more important in deciding a vote for Senate candidate: inflation and rising prices, or the Supreme Court overturning Roe v. Wade. Roughly two-thirds of poll respondents over the age of 50 said inflation.

Fabrizio said that because protection for abortion access is settled law in Nevada, the issue may be less salient than in other swing states considering bans or extreme restrictions on abortion. But he described the overturning of Roe as a “defibrillator for the Democrats,” helping juice enthusiasm among Democratic base voters.

Alongside those economic concerns, likely voters surveyed broadly expressed dissatisfaction with the state of the country. Only a quarter of respondents said they believe the country is headed in the “right direction,” and 40 percent approved of President Joe Biden’s performance, compared with 58 percent who disapproved.

Fabrizio highlighted those numbers as being part of a negative political environment for Democratic candidates, also noting that even the undecided voters (roughly 10 percent in both races) are Republican-leaning.

But Hogan pointed to stronger-than-average results for Sisolak and Cortez Masto, who both outperformed Democrats on the “generic ballot,” referring to a question about whom voters would support on a nameless congressional ballot between a Democratic and Republican candidate.

On the generic ballots, respondents favored the Republican candidate by 4 points (48 percent to 44 percent).

The poll also found a solid majority (58 percent) of voters over the age of 50 favored mailing every registered voter a ballot each election, with 46 percent strongly in favor. Responses to the question largely fell along partisan lines — nearly three-quarters of Republicans over the age of 50 opposed universal mail-in ballots, while 91 percent of Democrats over 50 years old and 60 percent of independents over 50 supported the policy.

Several other proposed policies included in the poll were supported by large majorities of voters over the age of 50, including allowing nurses licensed in other states to work in Nevada without obtaining a new license (63 percent supported) and creating a state retirement savings program (58 percent supported).

Independent voters were largely soured on Sisolak, with 57 percent of those respondents saying they disapproved of the governor (35 percent approved). Those voters were more split on Lombardo — 39 percent viewed him favorably, 44 percent unfavorably.

Hogan said a sizable number of Republicans (23 percent) viewed Lombardo negatively, which he described as a “real problem.” Though Lombardo was endorsed by Trump, Joey Gilbert, a vocal supporter of Trump who lost to Lombardo in the Republican gubernatorial primary, has undermined that result, casting doubt on the election and promoting the unsubstantiated belief among a pocket of Republican Nevada voters that he was the rightful winner.

“He is going to have to fight to consolidate those Trump voters that are skeptical about him not being pro-Trump enough, but he's also got to make inroads among these independents that are worried he's going to be a rubber stamp for Trump,” he said. “It's a real challenge for him.”

Fabrizio noted that Sisolak was viewed unfavorably by 18 percent of Democrats, and downplayed Lombardo’s unfavorable numbers with Republicans, saying that those voters were often the most right-leaning and would be unlikely to stray away from the GOP nominee once push came to shove.

“I can't tell you how many times I've seen them not like a Republican, but still vote for the Republican because they just cannot bring themselves to vote for the Democrats,” he said.

‘A game of inches’

With both races divided by a mere few points and inside the poll’s margin of error, a small portion of undecided, independent voters could play a key role in the outcome of each race.

After removing minor party candidates from the poll question, likely voters were split more evenly in both races. Asked whom they would vote for only between Sisolak and Lombardo, voters preferred Lombardo by a 2-point margin (48 percent to 46 percent). When cutting the Senate race down to the top two candidates, Cortez Masto’s lead slimmed down to 1 point (48 percent to 47 percent).

But in both cases, the narrowed-down, two-person races saw independent voters swing decisively in favor of the Republican candidates.

With other third-party candidates on the ballot, Fabrizio said it becomes a “game of keep away” for Democrats, who will have to prevent possible third-party voters from switching to Republican. In the Senate race, voters will be able to select from Cortez Masto, Laxalt, Libertarian Scott Neil, nonpartisan Barry Lindemann, Barry Rubinson of the Independent American Party and “none of these candidates.”

In the gubernatorial race, voters will be able to choose from Sisolak, Lombardo, Libertarian Brandon Davis, Ed Bridges of the Independent American Party and “none of these candidates.”

Hogan said the multi-candidate ballot question is a better predictor than the straight head-to-head contest, noting that Nevada’s nationally unique “none of these candidates” option on the ballot typically draws away some votes from the top candidates.

Still, even when pressed on the head-to-head question, more than 5 percent of respondents remained firmly “undecided,” leaving room for candidates in both races to pick up votes before November.

“I think you can see incremental movement, and that would make a difference — a significant difference — to either a Sisolak or a Lombardo or a Laxalt or [Cortez] Masto,” Fabrizio said. “We're playing a game of inches here on both sides of this equation.”

Find the poll report and toplines below: