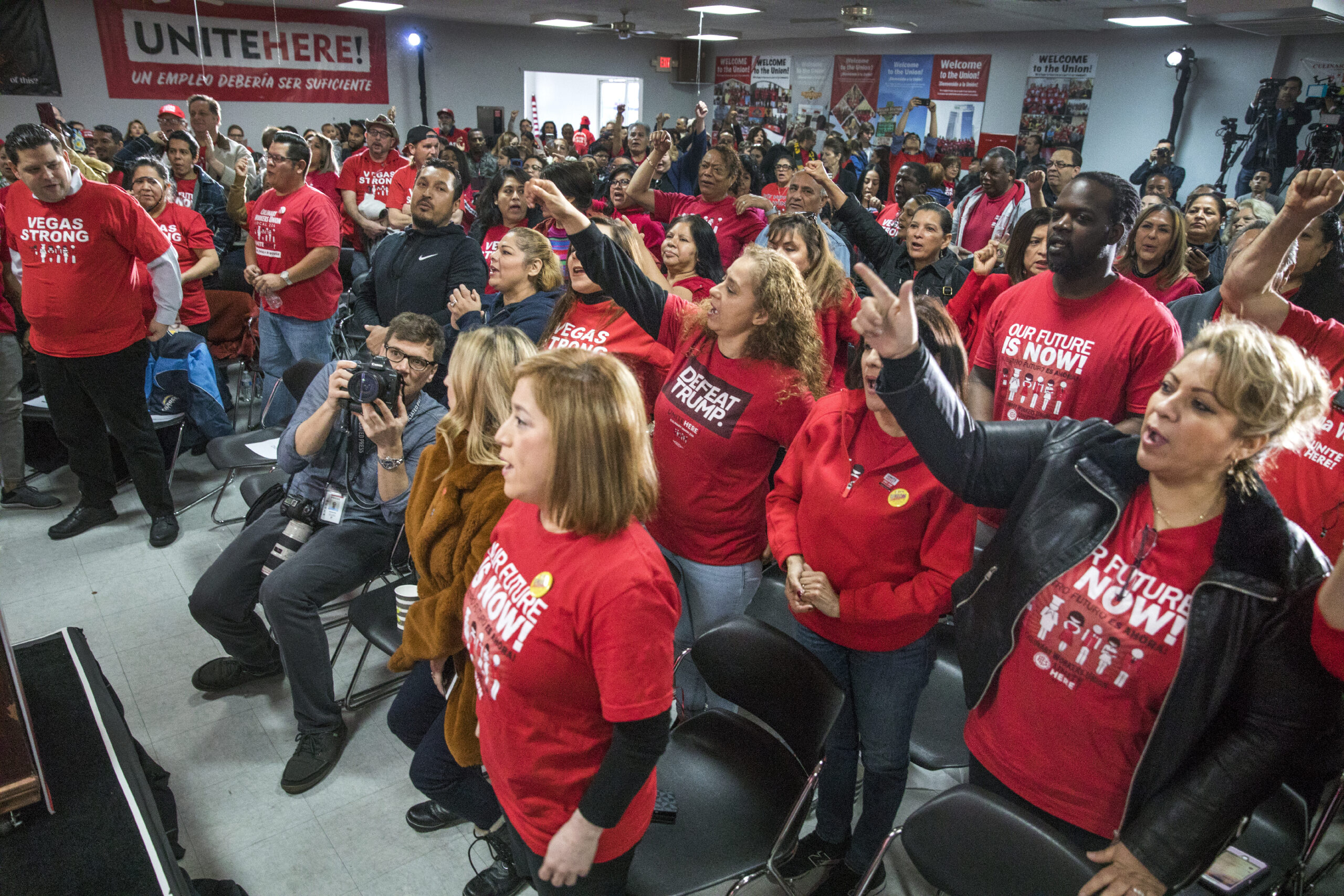 The politically powerful Culinary Union hasn’t yet endorsed in the Democratic presidential primary, but it is making clear which candidates it won’t be supporting.

A one-pager from the union, the kind of document usually distributed in employee dining rooms and break areas, obtained by The Nevada Independent obliquely accuses Vermont Sen. Bernie Sanders and Massachusetts Sen. Elizabeth Warren of wanting to take away union members’ hard-fought and much beloved health plans and warns that electing either candidate will lead to four more years of a Donald Trump presidency.

The union, which provides health insurance to 130,000 workers and their family members through a special trust fund, strongly opposes the Medicare-for-all plans the two candidates support, which would eliminate the union’s health plan by design.

However, until now, union leaders have directed their ire more generally at the policy than the candidates who back it.

“Trump and his Republicans are actively trying to destroy healthcare for working families, but presidential candidates suggesting forcing millions of hard working people to give up their healthcare creates unnecessary division between workers, and will give us four more years of Trump,” the flyer says.

Though the handout does not mention either candidate by name, Sanders and Warren are the only two remaining candidates in the Democratic presidential race who back Medicare for all.

A union spokeswoman said in a text message earlier this week that there was “no endorsement yet” and “no updates” on the timing of a possible endorsement. She did not immediately have further details Friday morning about the flyer.

The handout takes a direct shot at Sanders, who told union members during a town hall in December that they would receive an extra $12,000 a year to their paychecks under Medicare for all.

“Some politicians promise… ‘You will get more money for wages from the company if you give up Culinary Health Insurance,’” the flyer says. “These politicians have never sat at our bargaining table or been on a 24/7, 6 years, 4 months, and 10 days strike line — like we have to make an employer pay for healthcare. We will not hand over our healthcare for promises.”

There, the flyer is referencing the six-year-long strike by workers at the Frontier Hotel and Casino, who walked off the job in 1991 over better wages and health care benefits. Union leaders often mention the strike in talking about why they don’t want to see their health plans replaced by a single-payer, government-run health system.

Sanders state director Sarah Michelsen said Friday the campaign feels confident about its support from working class Nevadans and the Latino community, who make up the core of Culinary's membership. She also noted that the Vermont senator has been endorsed by several locals of UNITE HERE, the Culinary Union's parent.

"The senator has said we believe that Medicare for all will take health care off the bargaining table for unions and allow them to get more out of those processes in wages and other benefits," Michelsen said. "That’s our belief and that’s where we’re at."

Warren's campaign did not immediately respond to a request for comment.

Culinary health insurance is considered some of the best in the state, and the union opened a 60,000-square-foot health clinic a couple of years ago for its members, complete with urgent care, primary care and a pharmacy, where generic prescriptions are free. Union leaders have repeatedly stressed their belief that health care is a right and their desire to guarantee health insurance for all, so long as it doesn’t impinge on the union’s plan.

“OUR UNION BELIEVES EVERYONE HAS THE RIGHT TO GOOD HEALTHCARE,” the flyer says. “The high price of healthcare is killing Americans. Big Pharma, for profit insurance companies, and greedy hospital monopolies need to put people over profits.”

“How am I going to go and talk to the members and say, ‘You have to support a member like that?’” Arguello-Kline said. “I don’t think so.”