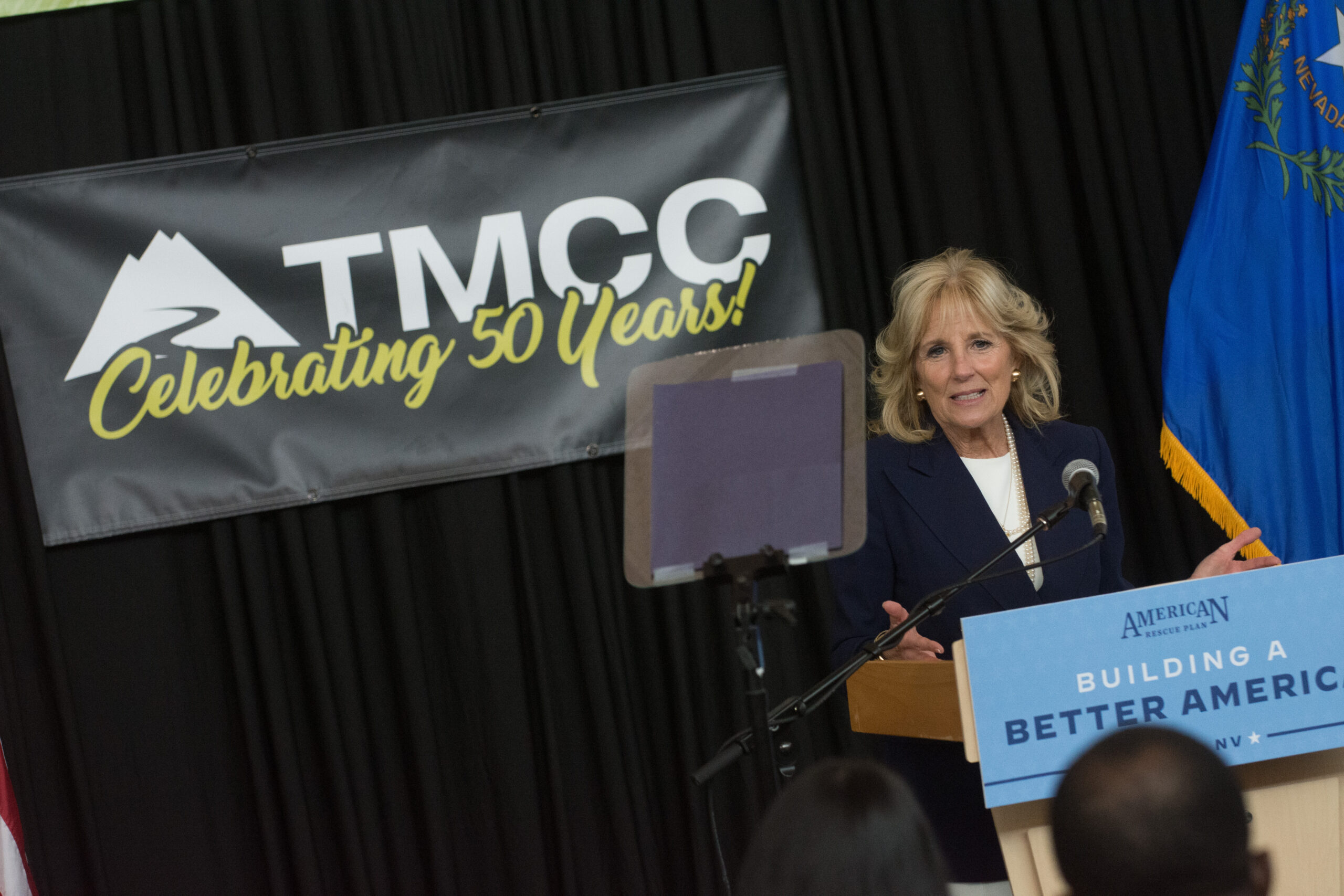 Her brief remarks followed a tour of the community college’s facilities and meetings with students in the nursing and public safety programs. The visit came as the nation’s economy has been roiled by forces both external and internal, with rapid job growth routinely overshadowed by rising inflation and skyrocketing gas prices.

“I've seen what building a better America means for real families,” Biden said. “It means investing in our workforce so they can be ready for the future. And it means working families have the opportunity to train for great jobs.”

Touting the American Rescue Plan — by far the largest of the Biden administration’s handful of  first year achievements — the first lady said the federal funding provides a way to address a “critical” shortage of health care workers and other industries.

Biden also praised her husband’s efforts on addressing the “shocking” Russian invasion of Ukraine and “[Russian President Vladimir] Putin’s aggression.” In the latest development of increasing economic pressure on Russia from the West, President Joe Biden announced Tuesday that he would halt all U.S. imports of Russian oil.

The first lady’s visit comes as the higher education world attempts to reset in the face of the “new normal” emerging in the wake of the pandemic.

Across the country, billions of federal aid dollars have poured into higher education institutions at every level, in a bid to stem the worst financial effects of the pandemic on colleges and universities.

Distributed as part of three tranches of money through the Higher Education Emergency Relief Fund (HEERF), the aid eventually totaled more than $199 million for Nevada institutions through 2020, with an additional $213 million included as part of the sprawling aid package within the American Rescue Plan.

Within that $213 million, roughly $19 million of additional ARP funds were specifically earmarked for two Nevada’s community colleges, and the majority — more than $14.1 million — went to TMCC. The remaining $5 million went to Western Nevada College, based in Carson City.

Of that money, roughly half has been delivered as direct aid to students, with the remainder filling institutional revenue holes opened up by pandemic campus closures and limitations on traditional money-generators such as parking or certain live events.

TMCC radiologic technology student Savannah Terrana introduced Biden Wednesday, noting she was among those students who benefited from the available ARP funding. Terrana received a $1,500 grant that covered the entire cost of her fall 2021 semester.

“I received my highest grade so far … because I had no financial stress for the first time since I've been accepted,” Terrana said. “Because I was able to pour all of my energy into the program, I felt confident enough to apply for student technologist jobs. I was hired at a local hospital in November 2021.”

Community colleges across the country were hit especially hard by COVID-related enrollment declines. That includes in Nevada, where community college enrollment fell almost 11 percent between the fall 2019 and fall 2020 semesters, compared to a drop of just 1 percent at the state’s two universities in the same span.

However, because enrollments are directly tied to the proportion of state funding provided through the funding formula, these massive enrollment drops will create ripple effects into future budgeting cycles — assuming lawmakers make no adjustments to so-called “caseload” adjustments.

At the College of Southern Nevada, for instance, the pandemic spurred the loss of more than 4,700 students between fall 2019 and 2021, or more than 13 percent. In financial terms, that enrollment loss, coupled with state budget cuts and expected lost student revenues, could total more than $44 million dollars annually.

“These formula elements are not sustainable, and are not going to keep the College of Southern Nevada moving in the direction that this board has charged us in terms of student success and student excellence,” Zaragoza said during the meeting.

In introducing Biden at TMCC Wednesday, Gov. Steve Sisolak also praised his own administration’s efforts on changing workforce development policy and tightening the relationship between the state and higher education system on such efforts.

“We know that skills training is essential for workers and our businesses,” Sisolak said. “We should recognize that a high school diploma is no longer enough. Our students need more skills, training and certificates to succeed and compete in the world and our community colleges are ready to do the work.”

Though workforce development has long been a central pillar of higher education, the finer points of workforce policy — and how those policies ought to dictate how NSHE is structured — have become a central discussion point of the last two years.

Sisolak himself has angled for a greater “alignment” between the NSHE and the state on workforce development, backing a 2021 law — AB450 — that aims to do just that.

On Wednesday, Sisolak also highlighted his directive made in a recent off-year State of the State address to “explore ways to make community college or other apprenticeship and training programs free for more Nevadans by 2025.”

Free community college was one many promises Biden made during his first address to a joint session of Congress in 2021.

However, after little movement on Capitol Hill on the issue, the administration signaled last month it would abandon efforts to implement free community college at the federal level though the sprawling Build Back Better plan.

Outside Sisolak’s comments Wednesday, it is unclear what form such a program may take in Nevada.