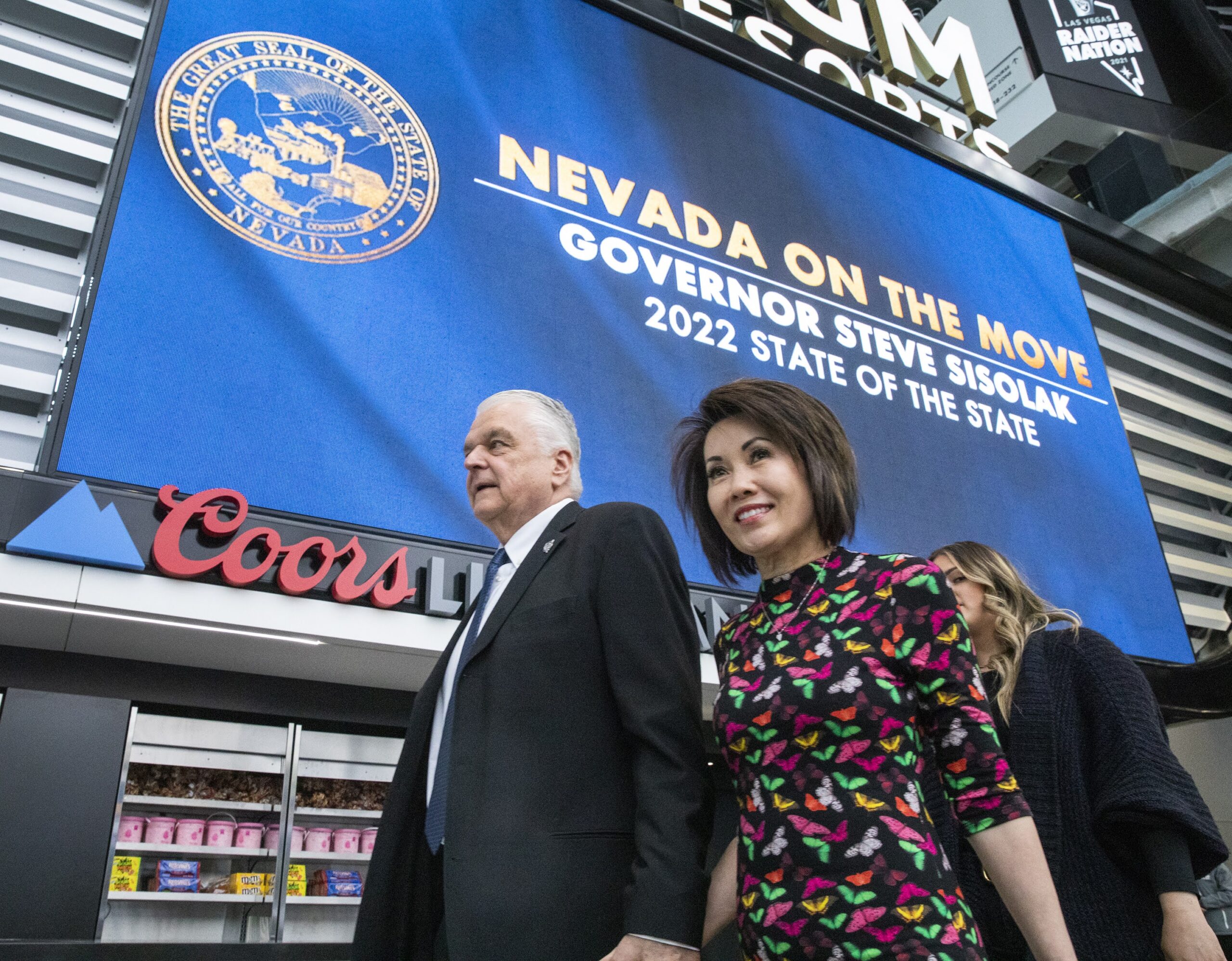 Gov. Steve Sisolak on Wednesday laid out plans for how Nevada will spend nearly $2 billion in federal pandemic relief money to confront some of the state’s most pressing issues, namely scarce affordable housing, incomplete broadband connectivity and poor access to child care.

The governor, in a rare, off-cycle State of the State address at Allegiant Stadium in Las Vegas, also detailed a laundry list of planned new initiatives and task forces, including covering the cost of school lunches statewide for the next school year, the creation of a statewide extreme heat strategy and joining a multi-state prescription drug consortium.

A key pillar of the plan is a $500 million investment in a new “Home Means Nevada” initiative that Sisolak said would boost housing construction, provide more homeownership opportunities and help seniors make repairs and accessibility retrofits to their homes. He described it as the largest housing-related investment in state history.

“While I can’t promise to solve the national [inflation] problem, I can promise to do everything in my power to help families with the rising cost of living,” he said.

Overall, Sisolak — whose wife and two daughters attended the speech — described the state of the state as “resilient,” pushing a message of “Nevada is getting stronger” throughout the speech that was echoed on signage throughout the stadium. He also said his administration would “hold the line” on taxes and that all of the proposals could be accomplished without raising taxes.

His remarks, while delivered in his official capacity, nonetheless marked a concerted effort for the first-term Democrat to outline a clear vision for his remaining months in office and a potential second term heading into what’s likely to be a difficult re-election campaign. He did not take questions from reporters after the speech.

“The truth is we never gave up,” he said. “And while we still have a lot more work to do, we refused to let the pandemic stop our progress.”

The roughly 20-minute address, however, largely stuck to spending initiatives. It marked the culmination of a multi-month effort (including a statewide listening tour) to garner feedback on how the state should spend its sizable allocation of federal American Rescue Plan (ARP) dollars. Nevada received a total of $6.7 billion from the federal aid bill, which included a statewide general allocation of $2.7 billion with relatively few strings attached on how the dollars can be used.

State leaders have already earmarked hundreds of millions of ARP dollars, including spending $335 million to repay loans from the federal government used to sustain the state’s unemployment trust fund and $215 million to address learning loss. But Wednesday’s suite of announced spending marks the largest allocation of those dollars to date, pending approval by the Legislature’s Interim Finance Committee.

In total, the office said the spending will create up to 1,700 new affordable units and preserve another 4,000 under “affordable” status for more than 30 years.

Separately, the governor mentioned a partnership with the AFL-CIO, a large consortium of unions, and the state infrastructure bank to help fund new housing developments, though no other details were immediately available.

The funds, all paid for from American Rescue Plan dollars, come in addition to $301 million the Nevada Housing Division has earmarked for affordable housing through its tax-exempt bonding authority.

“For thousands of those families, what really matters is keeping a roof over their head, or building equity in a home,” Sisolak said. “But there’s more to be done.”

His housing-heavy address came a day after Reno City Council held a special meeting to discuss affordability problems. Median home prices throughout the state have hit record highs, and residents priced out of the housing market are feeling the sting another way: Rent prices have increased by double digits in Nevada’s two urban areas compared with a year ago.

Housing isn’t the only category receiving an influx of funding. Sisolak also said he plans to allocate $500 million in federal funding for statewide broadband connectivity, with dollars coming from multiple funding sources to improve internet connectivity for Nevada residents.

Another $160 million will be put toward lowering the cost of child care by doubling the number of families who are given financial assistance for care and increasing the level of support provided. The investment dovetails with recent state initiatives to help families find crucial care for their children, and comes as the number of child care providers has shrunk in the last decade, now meeting only a fraction of the estimated need.

Sisolak also announced plans for stipends and tuition assistance for some 4,000 potential educators to help the battle an ongoing teacher shortage.

On the health care front, Sisolak said Nevada would join Oregon and Washington in a Northwest Prescription Drug Consortium to negotiate lower prescription drug costs. The two states established the program in 2006 as a way to pool their purchasing power to help lower drug prices from groups and individuals.

“By negotiating with drug companies together, we can start holding them accountable and get costs down,” he said.

The state is also creating a task force to examine the health care workforce, where staffing shortages have been exacerbated by the pandemic.

The theme of attracting and retaining workers continued into the public safety realm. Sisolak said he intends to bring the 2023 Legislature a proposal to increase salaries for state police officers.

“I’ve always supported increases in funding for our police to make sure they have the resources and training to protect and respect the communities they serve,” he said.

The governor also said he would:

State Senate Republican caucus leader James Settelmeyer (R-Minden) delivered a response to the speech on behalf of legislative Republicans, saying that Sisolak was using federal ARP funds as a temporary salve for issues that would persist and continue to cost the state money once used up.

“Spending money is not leadership,” he said. “Leadership is about making our government more efficient and effective for the people. This money will be spent to grow the government’s size, but with no thought of how to fund that growth when the money is gone.”

The speech represents a departure from normal protocol. Governors typically only deliver State of the State addresses in odd-numbered years heading into a legislative session, though they are not barred from doing so at other times. Former Gov. Jim Gibbons delivered the last off-year address in 2010 during the economic fallout of the Great Recession.

Meghin Delaney, a spokesperson from the governor’s office, said last week that Sisolak felt “compelled” to provide an update about the state’s pandemic recovery and share spending plans for the flexible American Rescue Plan funds.

Delaney stressed the speech was not campaign-related, though Sisolak is facing re-election this year. His governing decisions concerning the pandemic and the unfolding housing situation likely will influence voters as they cast ballots in November.

Michelle Rindels contributed to this report. This story was updated to include more information from the speech and clarify an aspect of the governor's housing priorities.