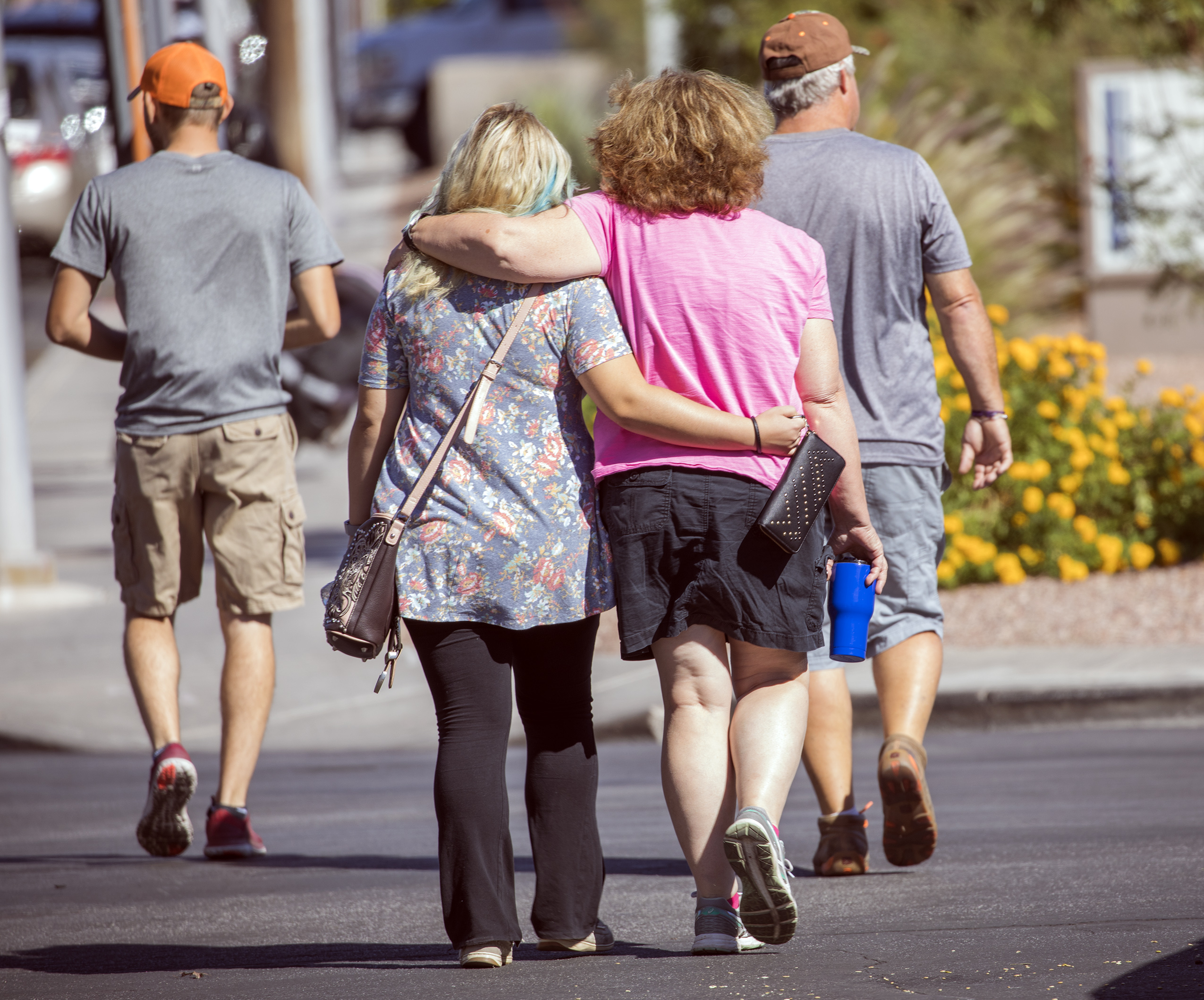 As we commemorate Women’s History Month, Nevada certainly has much to celebrate. The (growing) political power women in Nevada wield is broad and mighty. However, juxtaposed with the political power of women is the sobering realization that the pandemic knocked many of us flat on our face. Now, on the heels of news that billions of dollars in federal relief funds are coming to Nevada, the question before our leaders is: How can we help women in Nevada not only regain their footing but even power ahead?

The growing political status of women in Nevada is impressive and unmatched. In 2018, Nevada made history as the first state in the country to have a female-majority legislature, which in turn, elected its first female Senate Majority leader in 2019. The Silver State’s two U.S. senators are women, one of whom was the first Latina to serve among this esteemed group. Three of Nevada’s major cities are also led by women. Mighty women lead two of our higher education institutions and our higher education system office. Nevada is one step closer to enshrining equal rights language in its Constitution. And the 2020 general election ushered in a wave of female judges who were also women of color.

Nationally, and here in Nevada, more women are attending college and earning degrees. Women accounted for 57 percent of Nevada System of Higher Education (NSHE) enrollment in 2019 and 59 percent of awards conferred in 2018-2019. The graduation rate for women is higher than for men in all but one NSHE institution (Great Basin College).

And yet, despite political success and educational achievement, data shows that women in Nevada continue to lag in economic might and status. Women earn less than men (80 cents to every dollar earned by men), even after acquiring more degrees (although, remarkably, Nevada has the “5th smallest gender pay gap” among states). Less than 20 percent of U.S. patents have at least one woman inventor (and preliminary research from University of Nevada, Las Vegas International Gaming Institute indicates this number may be even lower in the area of gaming manufacturing patents). Among the dozen or so major publicly traded companies in Nevada, women make up roughly 25 percent of the boards of directors.

And if women were struggling before, the pandemic has thrown many of us off course. Data reveal that women have “borne the brunt of the pandemic.” In fact, by some estimates, the public health crisis has rolled back women’s progress in the workplace by an entire decade. For instance, in December alone, the U.S. economy lost 140,000 jobs and “women accounted for all of the job losses.” In 2020, women lost one million more jobs than men (accounting for more than 50 percent of all job losses). Today, unemployment rates are higher for women than men.

Part of the explanation for the devastating and disproportionate impact owes to the fact that women are overrepresented in the sectors that have been hardest hit by the pandemic. As the figure below shows, women account for more than half of the labor force in health care/social assistance (74 percent) and educational services (68 percent), as well as retail trade (51 percent) and accommodation and food services (50 percent) – two of the sectors most adversely affected by COVID-19. In early 2020, women accounted for 64 percent of all ‘frontline’ industries. Women in Nevada accounted for 49 percent of unemployment claims in 2020 and just over half in the months of April and May.

As we reported last year, COVID-19 has disproportionately affected communities of color, which are also overrepresented in the hardest hit sectors: nationally, Latinas have the highest unemployment rate of any group at 9.1 percent, followed closely by African American women at 8.4 percent; the unemployment rate for white women is 5.7 percent.

National data also reveals that women have left the workforce in droves. Since February of last year, “nearly 2.4 million women have exited the workforce [….], compared with less than 1.8 million men.” Women who did not lose their jobs may have quit, finding it too challenging and near impossible to continue working (in person or even remotely) while dealing with limited childcare infrastructure and the added responsibility of overseeing and monitoring kids who were connected to school remotely. Many also take on the responsibility of caring for aging parents. By the end of last year, “700,000 parents – two-thirds of them working mothers – left the labor force last year to care for a child.”

The fact that women have left the workforce should not be of concern to only those who care about gender equity. Rather, getting women back to work is critical to Nevada’s economic recovery. As two economists recently wrote, “Women re-entering the labor force throughout 2017–2019 were a key driver of labor supply and real GDP growth prior to the COVID-19 crisis. The extent to which women come back into the labor force in 2021 and beyond is critical to the overall economic outlook. However, absent targeted interventions and specific policies, “[r]ecent projections […] estimate that employment for women may not recover to pre-pandemic levels until 2024—two full years after a recovery for men.” The National Women’s Law Center recently cautioned, “there is a real danger that female labor force participation could face its steepest sustained decline since World War II.”

So, what specific actions can decision-makers in Nevada (and our female-majority Legislature) take to help women regain their footing, regroup, and power ahead? Are there ways to leverage the $4.5 billion Nevada will receive in federal economic recovery funds to help women re-enter the workforce - should they choose to? What is the state’s strategy for using federal funds to help those most adversely affected by COVID-19?

Many working mothers left their jobs because they faced childcare challenges. In Nevada, our child care is expensive. According to the Children’s Advocacy Alliance, infant and pre-school child care both exceed the cost of annual tuition for an in-state resident at an NSHE institution. Nevada should consider leveraging forthcoming federal recovery funds to invest in the childcare infrastructure so that women may more easily return to the workforce. One professor, citing a December 2020 study, stated, “The data show that investments in care infrastructure – in particular, early childhood and development programs – not only have benefits to children’s development and learning, but also pay dividends in families economic wellbeing, and in particular mothers’ re-entry and advancement in the labor force.”

Nevada lacks universal broadband coverage, the limitations of which became painfully obvious during the pandemic. Decision makers should prioritize the expansion of broadband – leveraging federal recovery funds, if possible. Reliable, affordable access to broadband will be critical to helping women avail themselves of retraining opportunities, many of which are likely to be offered online, and to support women entrepreneurs, especially those living in rural Nevada. Universal broadband coverage is the core pillar of efforts to build an inclusive workforce in Nevada.

Following the onset of the pandemic, Nevada’s community colleges moved quickly to provide short-term and accelerated certificate and degree programs in high-growth, high-wage industries to assist dislocated workers, many of whom are women. Decision-makers should continue to support these educational opportunities and explore innovative ways to offer as many of these programs as possible on-line. The on-line option will expand access to women who are currently working (and looking to retrain and upskill) as well as to women who left the workforce and are caring for children and family members.

A growing number of companies (including Amazon) offer “returnship” programs, which are similar to internships but are intended specifically for individuals who want to rejoin the workforce after taking time away. Workforce development ecosystem stakeholders in Nevada should work with private sector employers to explore the creation and/or expansion of return-to-work programs to assist women who left the workforce during the pandemic.

5.  Ensure that women-owned and women-run companies have fair and equal access to private and public capital

A report by the U.S. Chamber of Commerce found that the pandemic has disproportionately affected women-owned businesses. National data also reveals that female chief executive officers (CEOs) receive less than three percent of venture capital (VC) funding and women of color receive less than one percent of VC funds.

One way to support women entrepreneurs is to expand their access to capital. Decision-makers should identify ways to expand community banking and community development financial institutions (CDFI). Community banks play a critical role in local economic development. Nevada ranks 42nd in the country with only 15 community banks. Nevada has received far fewer CDFI funds than other states with similar populations. Private and public sector groups, including the Small Business Administration, Nevada Women’s Business Center, and the University of Nevada, Reno Small Business Development Center, should continue to provide free (and digital) training for women interested in starting and/or growing their business. These stakeholders should also help our female entrepreneurs connect to venture capital funds and mentor them through the process so that they can successfully secure these critical resources to grow their businesses.

Additionally, our political leaders should review Nevada’s public bidding process, which attracted attention in 2015, as well as 2017 and 2019 when the Legislature awarded million-dollar contracts in a no-bid contract process. Local business owners (and even some elected officials) have expressed frustration with Nevada’s current public bidding process. Some small business owners have commented that there appears to be an increasing amount of no-bid contract work being awarded, very little of which is being given to women-owned (and minority-owned) businesses.

With the goal of supporting women- and minority-owned businesses (also known as disadvantaged business enterprises or DBEs) and achieving greater economic parity, many states have revisited their public bidding process. Given the growing national attention to this issue, best practices in the public procurement process have been developed. One of these, for example, recommends that bids are open for extended periods of time (4-6 weeks, for example) to allow interested companies to put together the required application materials. However, a review of several RFP websites reveals that many government bids in Nevada are open less than 4-6 weeks. As one example, the Las Vegas Convention and Visitors Authority recently issued a request for information to “begin the process of selecting its [advertising agency] contractor,” which was only open for two weeks.

Celebrating Women’s History Month with special events and feel-good social media posts is easy, sweet, and…. totally ineffective with respect to earnestly helping those who have borne the brunt of the pandemic. Supporting the women of Nevada – our wives, mothers, sisters, aunts, daughters, and partners – in meaningful and significant ways and helping them recover from this public health crisis will require hard work, tough choices, sustained attention, and resources. Our leaders should develop a state strategy for leveraging forthcoming federal recovery funds to design policies and create opportunities to help women in Nevada, connect them to the workforce in the short-term, and build a more inclusive workplace, business ecosystem, and public contracting process that serves both women and all Nevadans over the long term. Our state’s economic recovery depends on it.