Horsford warns Medicare-for-all will take health care away from people, says it's too expensive 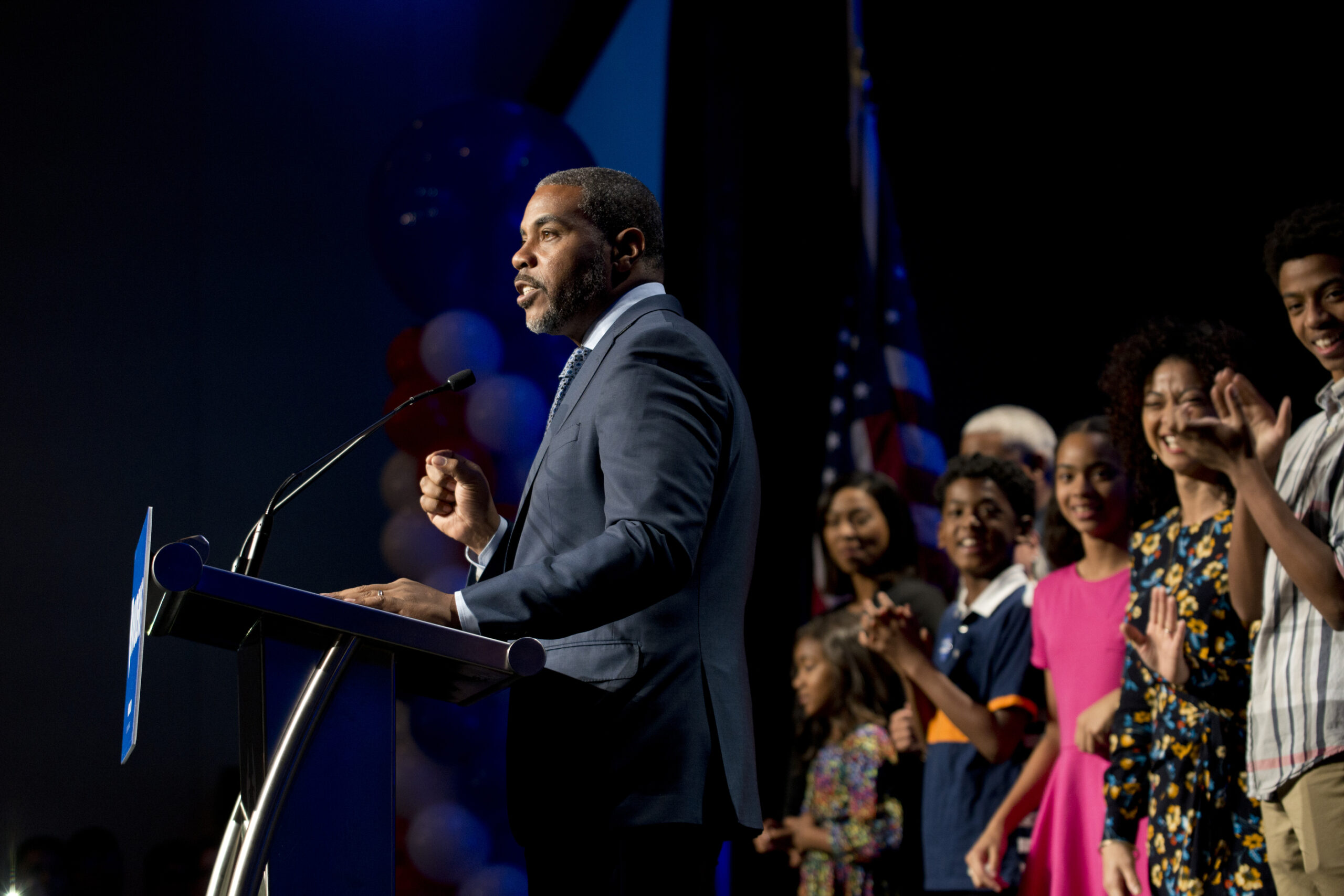 Rep. Steven Horsford said Thursday that replacing employer-sponsored health insurance with Medicare-for-all would be “taking health-care away from people that have it now,” his harshest condemnation yet of a single-payer health-care system.

The Democratic congressman, in an interview with The Nevada Independent, said that he could “probably not” ever support a Medicare-for-all plan in the manner that Vermont Sen. Bernie Sanders, a self-described democratic socialist who is running for the 2020 Democratic presidential nomination, has proposed. More than a dozen presidential candidates support some version of a Medicare-for-all plan, though Sanders and Massachusetts Sen. Elizabeth Warren have been the most vocal proponents.

Horsford has previously said that he’s “not one who’s going to come out and say I’m for or against” Medicare-for-all, though he acknowledged its “shortcomings,” and signed on as a co-sponsor to the “Medicare X” proposal to create a public health insurance option. Just a little more than half of Americans support a single-payer health insurance plan while 76 percent of them have favorable views of employer-sponsored health insurance, according to Kaiser Family Foundation.

“Despite what all the presidential candidates are saying, none of their plans are getting enacted,” Horsford said. “Congress will determine which one gets enacted, and we're doing the work right now to begin to vet all of these proposals, including the one that I'm currently a co-sponsor of.”

Horsford also raised questions about the feasibility of financing a single-payer health-care system. Sanders has proposed that Medicare-for-all could be paid for by some combination of an income-based premium paid by households or employers, progressive income and estate taxes and a wealth tax, among other alternatives.

“Who's going to pay for all that? Every one of us is taxpayers,” Horsford said. “If you can't afford your co-pay today, if you can't afford to buy your prescription drugs, how are going to be able to afford some increased tax in order to have the health care you need?”

The congressman, who is serving his second term after losing the seat in 2014 but then winning in 2018, is also skeptical of the political viability of the proposal.

“Look, there are a lot of good intentions with Medicare-for-all in all of their various plans,” Horsford said. “But with all due respect to those proponents, come spend a day in Congress and tell me how you're really going to get that done.”

The Democratic congressman added that presidential candidates’ positions on Medicare-for-all will affect his eventual endorsement and that he will “probably” endorse before Nevada’s caucuses in February. Who he endorses will ultimately depend on that candidate’s commitment to Nevada, he said, including what their plan is in the state for the general election and how they are going to help Democrats up and down the ticket such as himself.

Here’s what he said on some other issues:

Horsford is among a minority of House Democrats who have not called for impeachment proceedings to begin against President Donald Trump, looking instead to build a case against the president through continued oversight hearings and congressional investigations.

But as the number of Democrats seeking impeachment has risen steadily through the summer — including a pro-impeachment stance this week from fellow Nevada Democratic Rep. Dina Titus — Horsford denied that he was waffling on the issue.

“I have been very clear from the beginning that impeachment should not be taken off the table,” Horsford said. “I believe that Congress has a constitutional duty to conduct oversight and accountability of the executive branch. The Mueller report I've read cover to cover, and I’ve watched the proceedings two weeks ago in the Judiciary Committee and saw the clips from the intel hearing. But we still have five pending House lawsuits.”

He said those lawsuits, in part, are both withholding crucial information about the Trump administration and the 2016 campaign, as well as delaying the ability of House committees to subpoena key documents or individuals.

Horsford also defended House Speaker Nancy Pelosi’s strategy on impeachment — defined in large part by continuing investigations in lieu of a formal impeachment. That approach has come under fire in some Democratic circles after the report from Special Counsel Robert Mueller failed to exonerate the president from charges of obstruction of justice.

“[Mueller] said he doesn't have, as the special counsel, the ability to indict, but Congress under Article One of the Constitution does,” Horsford said. “So the Speaker, having been in that process a long time, understanding both the procedural, the legal, and political ramifications of the process, is trying to I think achieve the best outcome, which is to make sure that all of the facts speak for themselves.”

However, Horsford said that even if the Mueller report included credible allegations of obstruction of justice, those allegations still differ from “what we need to have on the record through a congressional proceeding” — a position the congressman has held since Mueller’s post-report press conference in May.

“It's not about what I believe,” Horsford said. “It's ultimately going to be about whether the information contained from these five House lawsuits, the ongoing investigations by Judiciary, Intel, Oversight and Government Reform and Ways and Means provide any additional information that help us without a doubt provide conclusive evidence that we need to not just move forward, but do so in a way where the public and other elected officials understand the severity of the allegations that are against this president.”

Horsford expressed concern over the relationship between Immigration and Customs Enforcement (ICE) and the Las Vegas Metropolitan Police Department through the widely used 287(g) program. A part of the Immigration and Nationality Act, Section 287(g) allows the agency to voluntarily partner with state and local police in order to detain undocumented immigrants who end up in police custody on behalf of ICE.

But critics of the program have charged that many of the immigrants swept up by 287(g) are caught by low-level offenses and not by more high-profile violent crimes.

“They have been stopped for minor traffic incidents, a busted tail light,” Horsford said. “They get pulled over — just like people get pulled over in the African American community — and they come up with a reason to detain you. Once you're detained, you're flagged for ICE and that's how you end up getting put into that system.”

However, little is known about the scope of the problem. Information requests sent to Metro from both news organizations and activist groups have yielded no new information, and ICE has not released internal data regarding the specifics of what crimes land immigrants in detention through 287(g).

Horsford did not specify exactly how many times constituents have flagged such detainments for his office, but said that he saw “many a week,” and that immigration, broadly speaking, was “one of the top constituent caseload issues that my office deals with.”

He added that his office has yet to request any such data from Metro, but said that the issue was on his list of priorities.

“This goes back to my days in the Legislature when we worked then with Senator Joe Neal to try to collect data on traffic stops and racial profiling,” Horsford said. “I believe we need to have fair and equitable policies that are administered across the board, that no community should feel targeted or singled out, and that's how people feel right now. Sadly, with this federal administration and kind of the tone that's been set, I don't fault them for feeling under attack.”

Washington Gov. Jay Inslee and former Housing and Urban Development Secretary Julian Castro both called Trump a “racist” during a Democratic presidential debate on Wednesday night. Horsford, however, declined to go quite as far.

“What concerns me the most are the president's racist, discriminatory and hateful actions and policies. That's what's most concerning to me,” Horsford said. “I don't know the man, his heart or his beliefs, but I do know what he's doing to our country based on his actions and his policies and they're not good for our country.”

Horsford recently voted to raise the federal minimum wage over six years to $15 an hour, a wage that he believes Nevada businesses can afford to pay.

“I have all the respect in the world for small business owners, entrepreneurs, and startups,” Horsford said. “But I believe that any business who knows that they can plan over a six-year period to pay their employees $15 an hour, providing that livable wage for their workers, are doing so because they know it's the right thing to do for their workers.”

He said that he “absolutely” does not disagree with the Legislature’s decision to raise the minimum wage to only $12 an hour. Horsford, a former state Senate majority leader, said that he understands that the session is “about managing legislative priorities to ultimately get things done.”

As Democrats on the 2020 presidential campaign trail have touted a number of new solutions to the country’s ballooning student, Horsford said he would like to see a “comprehensive” approach that forgives loans for “critical professions” such as health care or teaching.

“We really need to have a holistic approach,” Horsford said. “I know there are a number of proposals that are out there. I'm still again reviewing all of them, but my positions and the stuff that I have supported is primarily around loan forgiveness for critical shortage areas and workforce needs that we need to address.”

He added that any solution should also include incentives for employers to help pay off student loan debt, as opposed to creating more tax breaks for large corporations, but stopped short of forgiving all student loans.

“If you have loan forgiveness, it’s because you’re doing something, not because you got it for free,” Horsford said. “I think that’s the difference. I know there are some proposals out there where it’s like, ‘Just pay of everybody’s loans.’ I know I would be a little offended if someone else’s loan got paid off and they didn’t have to do anything for it, and nobody helped me pay off my loan.”