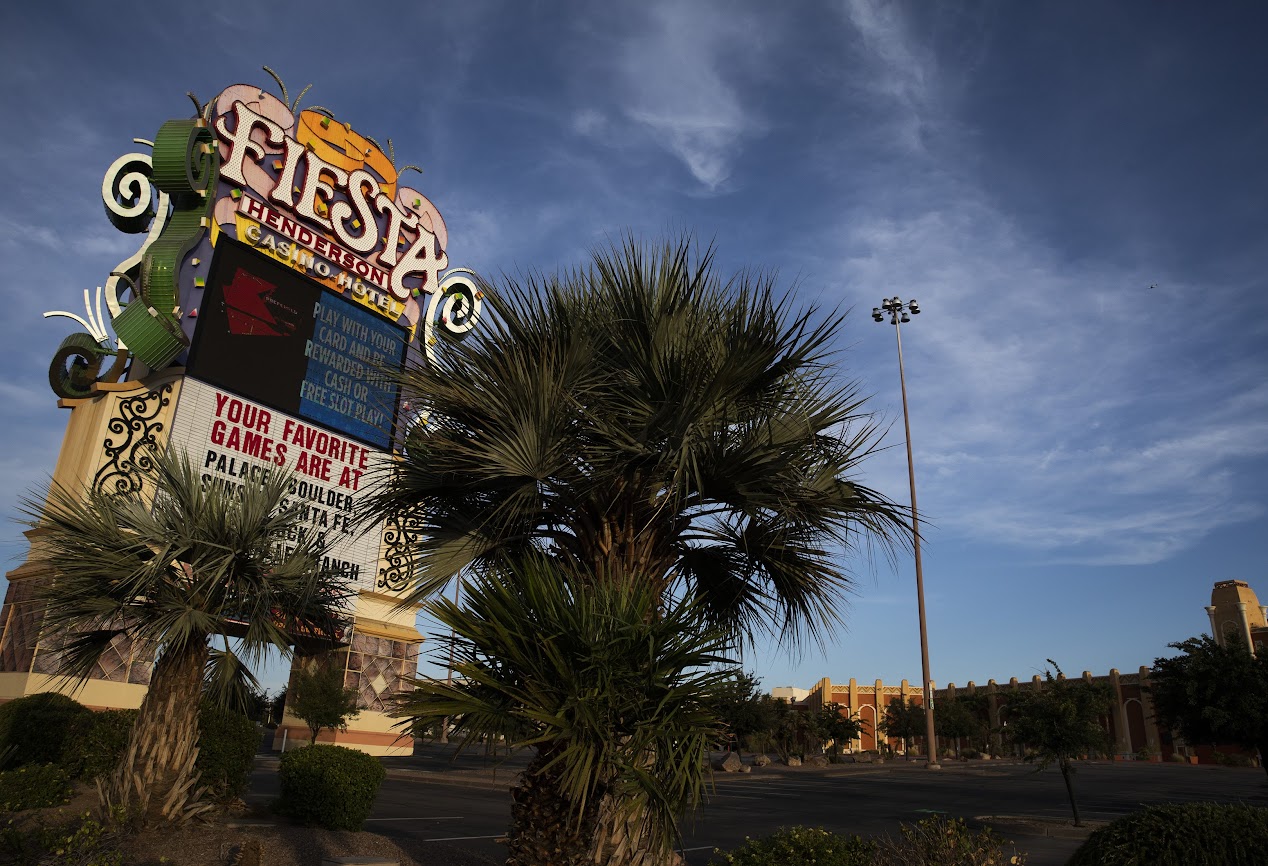 Henderson casino owner Joe DeSimone reached out to Red Rock Resorts last year to see if the company was interested in selling the closed Fiesta Henderson.

“They weren’t receptive,” recalled DeSimone, who operates Railroad Pass on U.S. 95 and The Pass Casino on Water Street. “I think they just kind of just wrote it off.”

Tim Brooks, who operates the Emerald Island and Rainbow Club casinos on Water Street, said he didn’t have an interest in buying Fiesta Henderson. However, he believed the longer the hotel-casino remained closed, “the less chance there was that it would ever reopen.”

Neither gaming executive was surprised by Red Rock Resorts’ recent announcement that the company would not reopen the Fiesta Henderson and two North Las Vegas casinos – Texas Station and Fiesta Rancho – that had been closed since March 2020. The casino operator said it would sell the sites after demolishing the buildings and “reposition the land,” meaning the gaming entitlements would be removed at the time of sale.

For Red Rock Resorts, the statement ended any uncertainty surrounding the future of the casino locations that had been shuttered going on 28 months. It also allowed company officials to double down on efforts to grow Red Rock’s footprint in Las Vegas.

Just five days later, Red Rock confirmed it was spending $172.4 million to acquire 126 acres at the southwest corner of Las Vegas Boulevard and Cactus Avenue. The purchase adds to the five development sites Red Rock already had in the Las Vegas Valley that covered more than 256 acres. Red Rock is also spending $750 million to build Durango Station near the 215 Beltway in the southwest valley. That property is expected to open in 2023.

For DeSimone and Brooks, seeing Fiesta Henderson permanently disappear provides an opportunity as a large competitor in the Henderson market is being erased. Through its Station Casinos operating subsidiary, Red Rock acquired the Fiesta in 2001, three years after Ameristar Casinos opened it.

“I’m sad to see it go, but not too sad,” DeSimone said of the 35-acre site near the intersection of Interstate 215, U.S.Highway 93-95 and Lake Mead Parkway. “I'm encouraged and hopeful that whoever buys it does something constructive. It’s just a really important piece of property in Henderson.”

DeSimone and Brooks both hope the land could be used for high-density housing, which could mean more casino customers.

“I'd like to see more residences,” Brooks said. “Obviously, when there are more people in the area, there's more money in the area. I think that would benefit small operators. I think we'll have a chance to pick up extra business as more people move to the area.”

In an email, Henderson Mayor-elect Michelle Romero said it’s too early to determine the site’s future.

“We are working with our economic development and redevelopment staff to determine the best use for this land,” Romero said. “The expansion of the Interstate and the state of our economy will be contributing factors as to what is developed.”

Brendan Bussmann, managing partner of Las Vegas-based gaming advisory firm B2 Global, said the challenge for any development on the Fiesta Henderson land is the city will be down “one net revenue source,” having lost all gaming proceeds associated with the location.

“They will still recoup the property tax on the site,” Bussmann said. “There was a demand for (gaming) at one point and likely based on our growth, future demand to support it.”

Even without business from Fiesta Henderson, gaming revenue in the area was a record total in 2021.

Through May, Boulder Strip gaming revenue is up almost 5 percent compared with a year ago.

Bussmann said there is an opportunity for large gaming development within the southeastern area of the Las Vegas Valley. In particular, he pointed to “significant space” between the Cadence community and Lake Las Vegas, as well as other growth pockets.

“Those are all customers that will be looking for a local place that has strong gaming and non-gaming amenities in an entertainment venue,” Bussmann said.

Red Rock Resorts officials said in May that more than 90 percent of the business from the three closed casinos had moved to other Station Casinos properties in the Las Vegas Valley. For Fiesta Henderson, that meant customers transitioned to nearby Green Valley Ranch, Sunset Station and four small Wildfire Casino properties the company operates on Sunset Road, Boulder Highway, Lake Mead Parkway and in the Anthem community.

Brooks said some of the Station Casinos business migrated to his Water Street casinos.

“I thought if the Fiesta reopened under the Red Rock flag, they would have just been competing with themselves,” Brooks said. “I think they believe it was a good move on their part not to reopen.”

He said the Water Street casinos have seen more customers following the opening of the Lifeguard Arena, an ice-skating venue with retail and a restaurant. The facility serves as the practice ice rink for the Henderson Silver Knights, provides public ice-skating sessions and hosts youth and adult hockey leagues.

“We would like to see more restaurants and bars along Water Street,” Brooks said, noting there has been development in the area of that nature in the past few years.

DeSimone said Railroad Pass picked up business shortly after Fiesta Henderson didn’t reopen following the state’s 78-day gaming shutdown in 2020. Because of its location adjacent to the highway system, the property was a popular stop for truckers.

DeSimone said much of that customer traffic transitioned to Railroad Pass. He is building a travel center for truckers on the opposite side of U.S. 95 on 20 acres that he owns. He is also adding 127 hotel rooms to Railroad Pass and building 90 hotel rooms at The Pass, giving Water Street its first hotel operation.

“I think (Red Rock) wanted to see how the market played out,” DeSimone said. “I could compete with them on the gaming side with the locals and the truckers, but I’m glad I won’t have to deal with another 235 rooms.”

Keeping away the competition

Red Rock Resorts was spending $2.1 million every three months to keep the closed properties operational. Deutsche Bank gaming analyst Carlo Santarelli said after the announcement the company would have to disclose impairment charges – an accounting term used to describe a loss in the value of the properties – on a future earnings statement.

The casino operator will also incur costs to demolish the buildings and clear the land.

Bussmann suggested Red Rock is gladly taking on the costs because it will reduce competition. The company and Boyd Gaming are considered the two dominant casino operators in Southern Nevada that focus efforts on the locals' customer base.

“Clearly, this was a protectionist move to block a prime site for future gaming,” Bussmann said. “It does provide an opportunity, though, for those operators in the (Henderson) area.”

DeSimone and Brooks also see the sale as a design to keep out competition.

“I think the (Fiesta) location is great and under certain circumstances, gaming could be revived,” DeSimone said. “But it would cost someone a lot to do it.”

Analysts suggested the prices for the three closed casinos would be lower than if the gaming entitlements were included with the locations.

“This is a permanent restriction that is placed on the land permanently and recorded on the title report,” Parks said. “They have taken this approach previously on land parcels they have sold throughout the valley.”

In 2018, Red Rock sold 25 acres of a site along Boulder Highway near Charleston Boulevard that once housed the former Showboat Hotel that had been named Castaways. Through Station Casinos, the site was bought out of bankruptcy in 2006 and the building was imploded with plans to construct a new hotel-casino.

However, the recession and the company’s subsequent bankruptcy reorganization shelved the project. Red Rock sold 25 acres of the site to a developer who has since built a 344-unit apartment complex, a mini-storage facility and a building for the Southern Nevada Health District.

Red Rock is using the remaining 5 acres to build its seventh Wildfire Casino in the Las Vegas Valley.