In Election '22, the Reid Machine showed it is very much alive 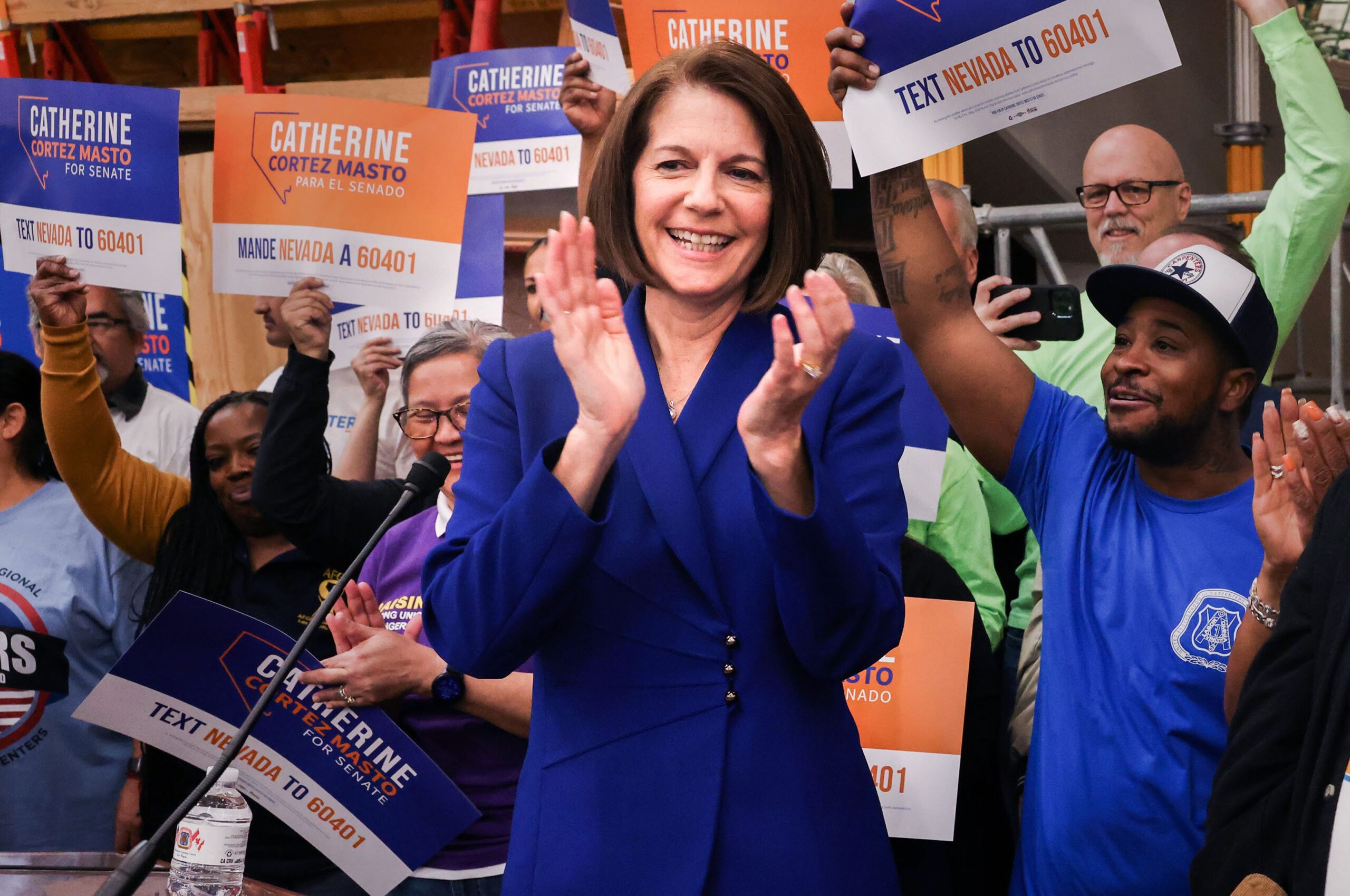 In mid-September, two sets of focus groups were conducted with swing Nevada voters, self-identified Democrats who said they were open to voting for Republicans.

Of the 17 voters combined in the two groups, about a third expressed openness to voting for Republican Joe Lombardo, citing Gov. Steve Sisolak’s handling of COVID. By contrast, none of the participants expressed any possibility of voting for GOP Senate hopeful Adam Laxalt, all citing his pro-life position.

I didn’t realize at the time just how accurate a harbinger of November those focus groups would turn out to be for the top two contests. Granted, when a race is decided by less than 2 percentage points, a few thousand votes out of more than a million cast, it’s foolhardy to try to pinpoint one factor. But it’s clear that Lombardo was able to capitalize on hardened gubernatorial liabilities in a state still suffering from a COVID hangover while Laxalt was hobbled by familiarity that bred contempt from 2018 (loss for governor) and 2020 (fronting The Big Lie for the Trump campaign) while Democratic Sen. Catherine Cortez Masto secured key rural endorsements (Laxalt underperformed in those 15 counties compared to Donald Trump and Lombardo) and brushed aside pundit skepticism and homed in on abortion in the closing weeks.

Lombardo’s victory, which should not be downplayed because it came in the race for the state’s most important office, could not obscure what was an otherwise disastrous midterm for the GOP here, tantamount to a blue wave down the ticket that resulted in vulnerable constitutional office candidates winning, three targeted House Democrats holding on and legislative Democrats expanding their majorities in both houses.

Other than the governor’s race, how was the state of play, Nevada Republicans?

Note: If you are bragging about taking lieutenant governor and controller, the two least consequential state offices, your straws have exceeded your grasp.

The lessons of Election ’22 in Nevada are multifarious —candidates and campaigns have never mattered more, independents are not who we thought they were and the Republicans blew a chance that may not come again soon. In a state where the president was under 40 percent in even some Democratic polls, gas prices were some of the highest in the country and inflation was soaring, the real, underlying story about this cycle is that deniers were denied. Oh, I don’t mean election deniers, although the three most dangerous (Laxalt, Michele Fiore and Jim Marchant) all lost.

I refer to Reid machine deniers, who were the authors of and sources for many election prebuttals — and who were proved wrong. Again.

Cisco Aguilar would not be elected secretary of state, Zach Conine would not be re-elected as treasurer, Susie Lee, Steven Horsford and Dina Titus would not still be in Congress and the Democrats would not have a supermajority in the Assembly and a near-one in the state Senate without what the machine accomplished.

Six years after the eponymous head of the Democratic organization retired and less than a year after Harry Reid passed away, hobbled by know-nothing, talk-a-lot socialists who seized control of the means of production and couldn’t produce, the machine saved Cortez Masto and many others down the ballot.

With the essential aid of a key cog in the machine, the Culinary Union, which backed up its pre-election braggadocio with an epic effort, the Democratic organization erected about a decade and a half ago continued a remarkable run under the most adverse circumstances it has ever faced. Since 2008 and with the only outlier coming in 2014 when a strategic error of not running anyone for governor cost dearly, the Reid machine has produced sweeping victories for the Democrats here. The rare GOP successes —Dean Heller for Senate in 2012 and Lombardo in 2022 — have come, as one GOP strategist put it: “It remains as it has been, Republicans have to pitch a damn near perfect game to win.”

I have chuckled through the years as naysayers in both parties, most of them unburdened by knowledge, have pooh-poohed the Reid machine’s potency, which comes from the architect, Rebecca Lambe, and expert hands she hires and collaborative groups she harnesses to turn out voters who will cast ballots for Democrats. It sounds simple, but it is far from it. Driven by data and powered by passion, this conglomerate has dominated the GOP here for years, with a relentlessness embodied in the man whose name it bears.

Somewhere Prince Harry is chuckling and already thinking about 2024.

The most remarkable achievement by the machine this cycle was not, as you might assume, re-electing Cortez Masto, which the national media assumed would not happen and the Republicans here and inside the Beltway were confident bordering on cocky they would prevent. That was a prodigious accomplishment, but the greatest testament to the machine was a loss: It nearly re-elected a governor who had shut down the state and then provided fodder for Lombardo to cry “scandal” when a testing operation tied to the sons of a donor and friend proved disastrous. Considering Sisolak’s negatives and considering Lombardo’s campaign was basically a GOP all-star team, it is almost miraculous that the governor came within 15,000 votes (1.5 percent) of being re-elected. Lombardo also was helped, perhaps even kept in the game, by one man, developer/UFO aficionado Robert Bigelow, who invested millions to help defeat Sisolak and the new governor will have to show that his gratitude ends at state government’s door.

In the end, Sisolak, who had to make excruciatingly difficult pandemic-driven decisions knowing he would pay a political price, was at least partly and maybe mostly undone by questions about why he made certain choices and how he communicated them. An unemployment system implosion also surely cost him as did Lombardo’s campaign decision to call him “Northshore Steve,” so people would not forget the name of a COVID testing company exposed by ProPublica as unreliable and run by the sons of Peter Palivos, an insider wannabe who slithered up to Sisolak and gave him campaign money and socialized with him. Sisolak insisted Palivos never talked to him about Northshore, but even if that is true, their close association gave Lombardo all the fodder he needed to call the governor “corrupt” and he and his allies ran millions of dollars in ads on the subject. If the pandemic didn’t cost Sisolak the election, Palivos did.

And still — still! — the governor almost survived thanks to the Reid machine/Culinary turnout of inveterate Democrats.

Cortez Masto, on the other hand, did not have the inherent baggage Sisolak had to carry and was more burdened by her own low profile and President Biden’s high profile. Laxalt ran a cookie-cutter, unimaginative campaign that, unlike Lombardo’s, was targeted almost completely towards the GOP base with no regard for independents —whom exit polls showed him losing by a decisive 3 percentage points. Laxalt essentially is the anthropomorphosis of a random right-wing talking point generator, which makes you a favorite with Sean Hannity or Hugh Hewitt, but eventually exposes you as a one-dimensional candidate who appeals to Elko and Pahrump but doesn’t play as well in Las Vegas and Reno. (Imagine a Laxalt losing Washoe County three times in three runs for office —somewhere Tall Paul, whose seat Reid took and his grandson could not, is shaking his head.)

Laxalt, who is not too many steps above the last sure-thing GOP winner named Sharron Angle who the machine dismantled, did not help himself by saying on tape that Roe v. Wade “was always a joke.” If you did not hear that recording, you don’t have a television or YouTube account. Exit polls showed that a strikingly large percentage of voters, 28 percent, said abortion was the most important issue to their vote and Cortez Masto won that cohort, 89-9.

And speaking of flawless campaigns, Cortez Masto’s was pretty close. She was disciplined and ubiquitous, especially at the end when she needed to coalesce the Hispanic vote, which exit polls showed she won with 62 percent. She also defined Laxalt as a D.C. child of privilege who moved here to run for office — that “Succession”-themed ad was memorable —and it had the added benefit of being true, too.

All of that would have gone for naught, though, if the machine had not first pushed state lawmakers to change the election laws to cement mail balloting as a given for anyone who wanted to use it and then reconfigure how the organization turned out voters to the new construct, like a car putting on snow tires and chains to adapt to new terrain. (It did take forever, again, to count votes, which better be fixed lest it cripple Nevada’s case to be first in the presidential primary pecking order.)

Indeed, winter is coming for Nevada Republicans, who once again are left out in the cold. Sure, they have Lombardo as governor, but we really know very little — and my guess is he does not, either — about what kind of governor he will be. Despite some perfunctory nods during the campaign, Lombardo has the least knowledge of state government than any governor in many decades. Kenny Guinn had no state experience, but he had been intimately involved in civic affairs for many years, and Sisolak, while he had never been forced to understand what DHHS was, had been a regent and county commissioner, not to mention a lobbyist.

Lombardo essentially comes in as a tabula rasa, and if he does not put people around him who understand Carson City and if he does not try to find middle ground with Democrats who have an iron grip across the courtyard (and they with him, too, of course), the state will be in stasis.

We may think Nevada dodged a bullet with election deniers and kooks losing up and down the ticket. But nearly half a million Nevadans voted for unqualified loons such as Fiore and Marchant; this was not exactly a landslide for sanity.

Lombardo and legislative Democrats have an opportunity to show that the middle matters, that the extremes should be rejected instead of pandered to, that compromise is still an art not a myth.

We will soon know if they are up to the task.

A brief note on my biennial predictions: I was correct on the winners of the top two races, and I was not far off on the percentages. Those were two of the hardest picks of my oracular career. I also foretold all the constitutional office races correctly, got all of the ballot questions right and two of the three House races, while my faith in Republicans to at least pick up seats in the Legislature was misplaced. Turns out despite my generally stellar record this cycle, even I underestimated the Reid Machine.