In Las Vegas, local Republicans push back against Lee on impeachment probe 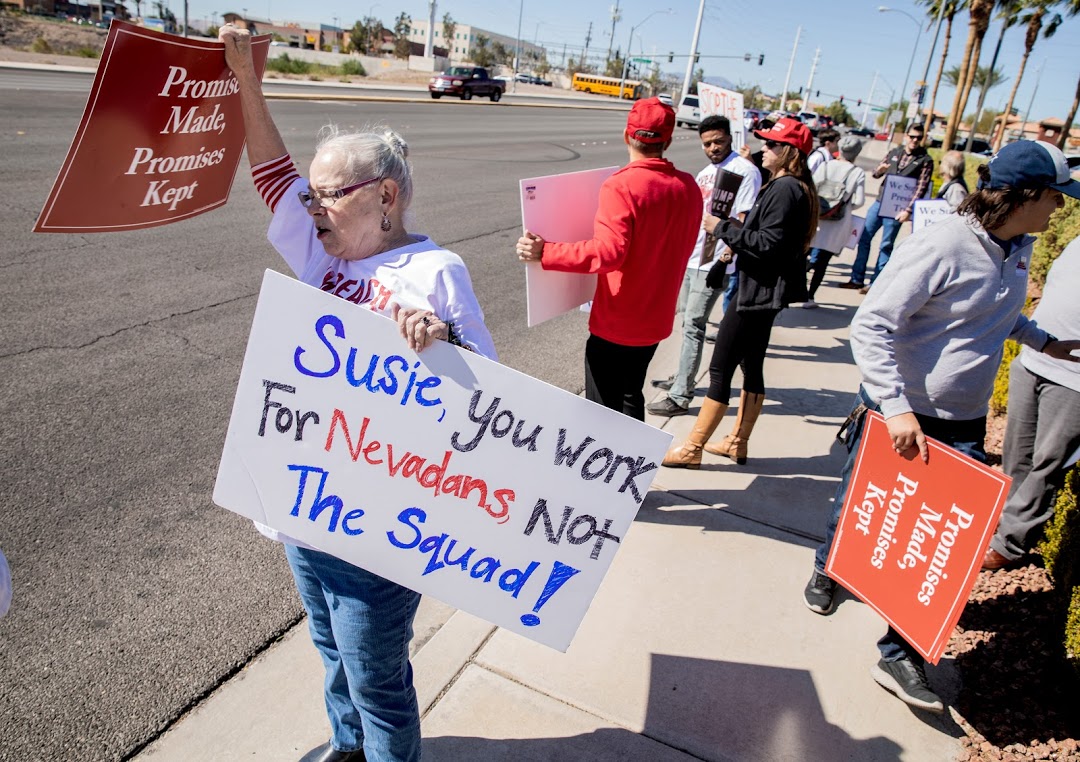 Hefting signs that read “Susie, you work for Nevadans, not the Squad” and “Don’t Impeach,” several dozen pro-Trump protesters crowded around the Las Vegas-area district office of Democratic Rep. Susie Lee on Thursday in what marked the first salvo by Nevada Republicans to pressure the rookie congresswoman in a swing district on the issue of presidential impeachment.

Those signs and chants ultimately sought to tie Lee — among the more moderate Democrats in the House — to an impeachment as “coup,” casting the investigation as an illegitimate attempt by liberal Democrats to overturn the democratic process.

Lee, who represents a congressional district that voted for Donald Trump in 2016 by a margin of 1 percentage point, joined fellow Democrat Steven Horsford in calling for an impeachment inquiry just days after media reports surfaced of explosive whistleblower allegations that the president had asked his Ukrainian counterpart to investigate the son of leading Democratic presidential candidate Joe Biden.

Pumping up the crowd, Republican Assemblyman Gregory Hafen, who represents a rural Assembly district north of Las Vegas, accused Democrats of “trying to undo the 2016 election.”

“All this has done is have all of you show up, in a grassroots effort, to fight back,” Hafen said. “Nevadans are tired of the Democrats’ witch hunts.”

That much has held true for Las Vegas resident Robert Crooks, 70, who attended the rally and characterized the investigation into Trump as a “coup” — a word often invoked in the midst of such probes.

“That’s what it is, [a coup] against a duly-elected executive of the United States of America,” Crooks said. “This is nothing short of treason.”

He went on to describe the “B.S. with Schumer and Pelosi” as a “charade,” merely an excuse to “do nothing while they say they’re doing something.”

Following nearly an hour of rallying and chants of “four more years,” Hafen eventually led the crowd to the office’s door, where he attempted to gift an “Impeach This” T-shirt — a reference to an internet meme amplified by Trump that shows a ruby-red electoral map — to staffers. Though the office declined to accept the gift, the T-shirt has proved a boon to the state party, which has raised more than $30,000, according to Hafen.

From the other side of the political coin, there was little counterprotest — just one member of a local chapter of Indivisible, a localized liberal activist group formed in the wake of the 2016 election. That member, Sayuri Rupani-Hayes, said it was important for her to “show up.”

“We’ve got to show up, we’ve got to show these people that we’re actually the majority,” Rupani-Hayes said, referencing several polls that show a small uptick in public support for impeachment. “The majority of Americans did not vote for this president, and they want him out of office for the crimes that he has committed.“

Still, the impeachment process remains young in comparison to past efforts undertaken against Presidents Richard Nixon and Bill Clinton. And as the process continues to drag on, it seems Thursday’s rally may mark only the beginning of the Republican pressure campaign on the state’s moderate Democrats.