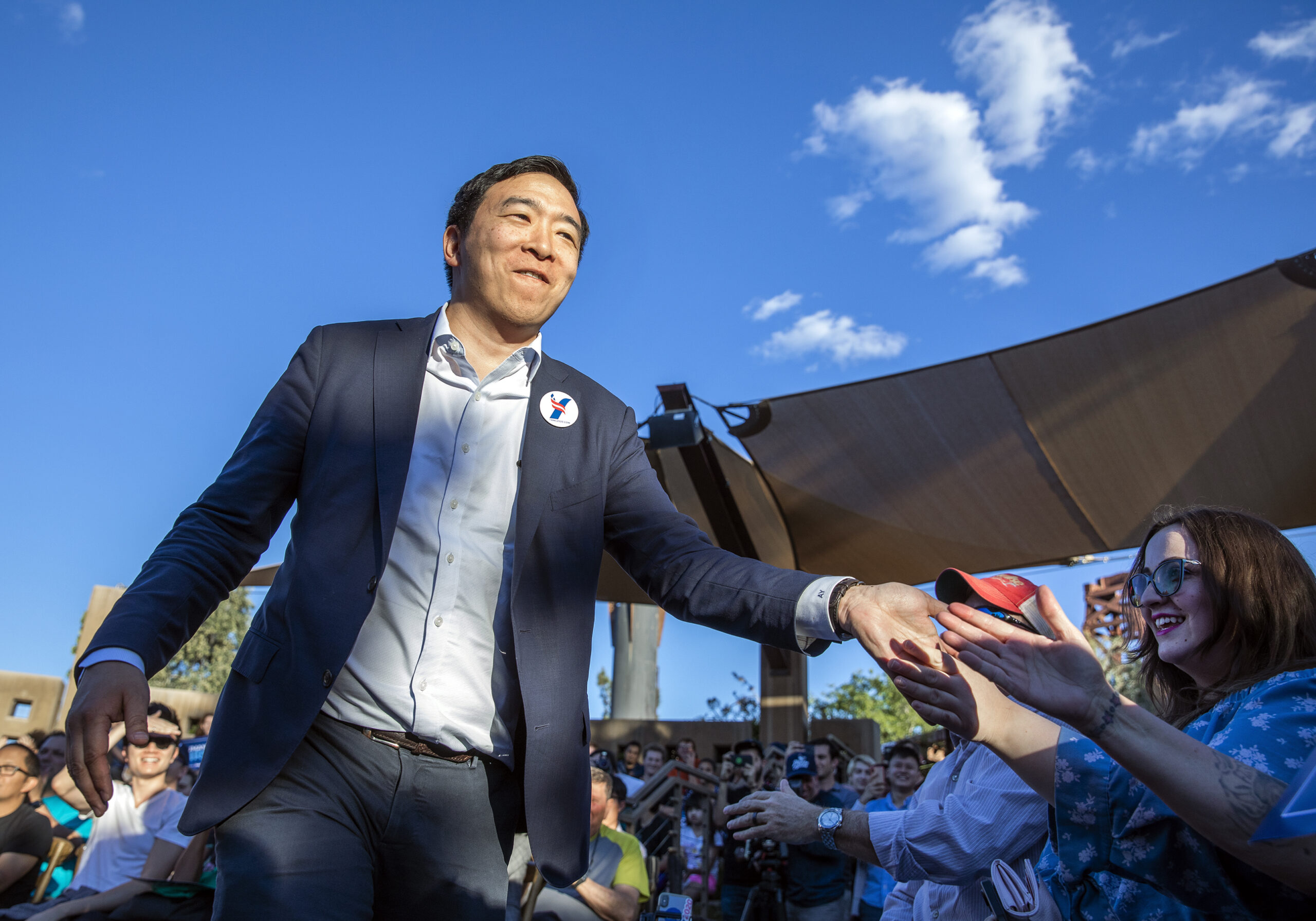 Democratic presidential contender Andrew Yang has made a campaign of saying automation will decimate American labor and Wednesday in Las Vegas, he said Nevada and its service industry could be primed to take some of the hardest hits.

“It turns out that Nevada is ground zero for the automation of jobs, where three out of five retail, gaming and hospitality jobs could be subject to automation, and we're already seeing it, where MGM just automated away bartenders,” he said in an interview with The Nevada Independent. “And people know that's just the beginning.”

That was the pitch Yang made to voters in Las Vegas this week as part of a campaign swing through Nevada, one leg of a broader 15-state tour that comes as the entrepreneur and nonprofit founder looks to distinguish himself amid a Democratic primary field filled to the brim with candidates.

“This is going to be an economic natural disaster,” he said. “We need to wake up and think much bigger about what that means, and what the best path forward would be in an economy that is so hugely dependent on these types of jobs.”

Specifically, Yang has called for $1,000 per month for every American over the age of 18, something he calls a “Freedom Dividend,” funded by a value-added tax. In Las Vegas, as he has before, he compared it to Alaska’s Permanent Fund Dividend, a roughly $2,000 yearly payment to nearly all Alaskans, and touted it, ultimately, as a driver of economic activity in a time of looming uncertainty.

Yang has thus far been the only major candidate to hang his hat on universal basic income (also known as UBI) as a major campaign issue — let alone a central campaign theme — but it, along with automation, is an issue he says has to be addressed by Democrats because of its implicit role in fueling support for President Donald Trump.

“How the heck did he win in 2016? We automated away 4 million manufacturing jobs in Michigan, Ohio, Pennsylvania and Wisconsin,” he said. “And now we're about to do the same thing to retail, call centers, truck drivers, fast food and on and on.”

Still, Americans at large have mixed opinions on UBI. A February survey from Gallup and Northwestern University found 48 percent of respondents were for the idea while 52 were against, though roughly two-thirds of self-identified Democrats favored UBI.

Yang has also been vocal in his support for Medicare for All, and during an interview with The Nevada Independent he also said he would support reinstating environmentally-focused monument designations, broadly speaking, and supported the funding of a nuclear waste storage facility at Yucca Mountain.

“It’s not a Nevada problem, it’s a United States problem,” he said. “And I would be very happy to put federal resources to work to clean up nuclear waste in part because nuclear power should be here to stay. It’s an ongoing problem, and we can’t have nuclear waste building up in places where states and cities are having a hard time making it safe.”

In a still-widening field of Democratic contenders, the 44-year-old Yang has largely toiled in obscurity since launching his campaign in late 2017. With more than a year’s head start before a major candidate announced a bid, Yang remains one of the least recognized names in the race, though his numbers are in line with candidates such as Hawaii Rep. Tulsi Gabbard and Washington Gov. Jay Inslee.

Even so, Yang has seen a modest surge in support over the last few months. His campaign raised more than $1.7 million in the first quarter of 2019, with a little more than $3,000 of that coming from Nevada, while polling averages and donor numbers have put him in a position to qualify for Democratic debates this summer — a relative coup for the comparatively small Yang campaign.

In Nevada, he chalked up some of his support to a general friendliness to outsiders and outsider candidates, driven in part by the fact that many Nevadans weren’t born in the state.

“But there's also a real frustration with the establishment here, among the folks I've met,” Yang said. “When I said at the [Las Vegas] rally the Democratic Party needs some new ideas, it was one of the biggest applause lines of the night. It's not like people think that the Democrats have everything figured out.”

At least some of it can be attributed to a growing interest in the entrepreneur among younger voters. The self-described “Yang Gang” has seen burgeoning communities grow on Twitter and Reddit, where Yang supporters look to meme their candidate out of his name-recognition vacuum. He also made an appearance on the Joe Rogan Experience, a podcast hosted by comedian Joe Rogan, that has to-date received more than 2.8 million views on YouTube alone.

At a roundtable at the Service Employees International Union headquarters in downtown Las Vegas, the candidate touted the Yang Gang as he met the assembled crowd, handing out high fives and fist bumps. Even after the event, several dozen attendees were quick to line up for a photo, phones in one hand and his book, The War on Normal People, in the other.

For a full list of presidential visits, including who visited, where and when, see our 2020 presidential candidate tracker.