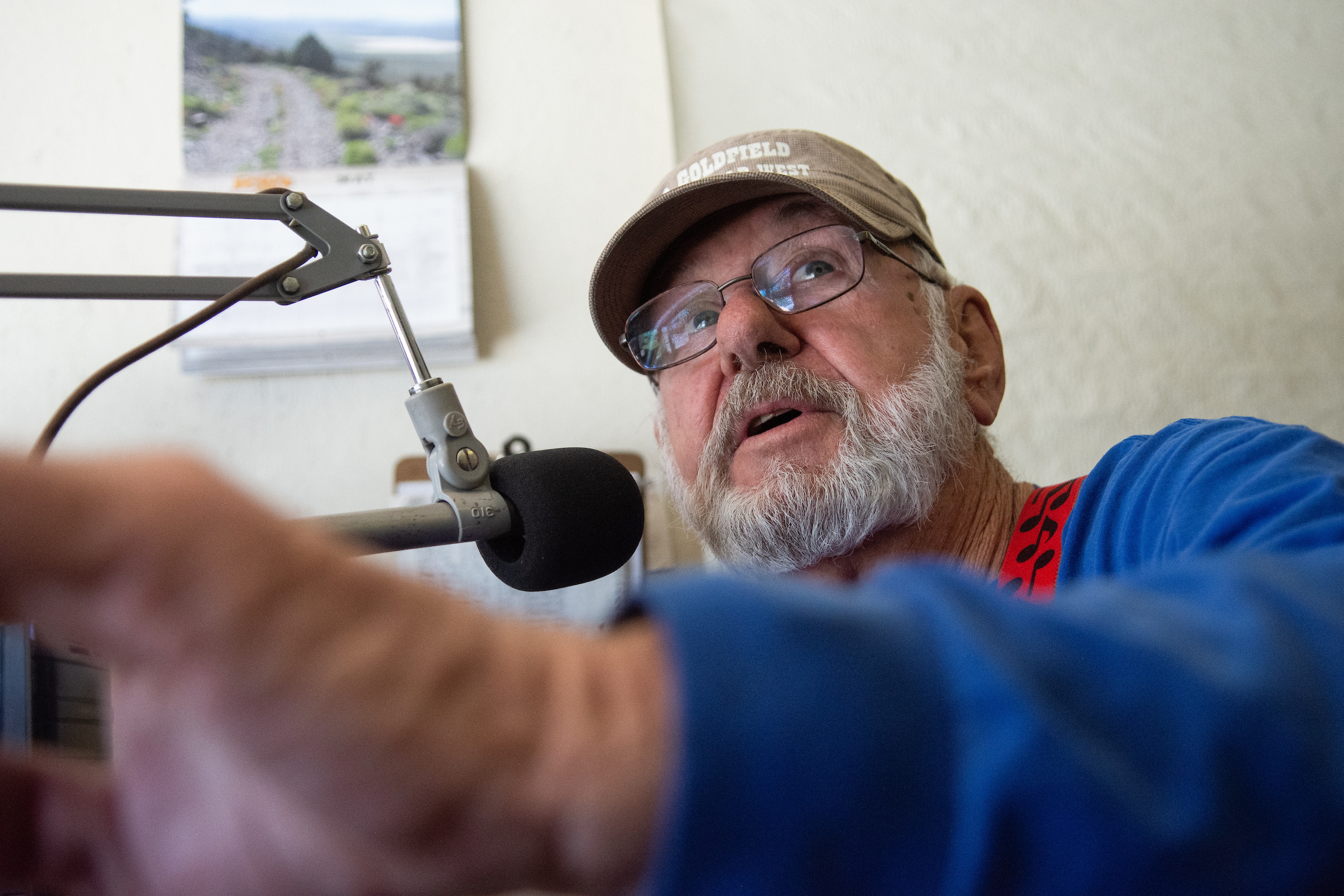 Right off the main drag through downtown Goldfield, across from a supposedly haunted hotel and the occasional wild burro, there is a building straight out of a classic Western film.

The sign on the door reads “Radio Goldfield KGFN 89.1” — home to the tiny community radio station that serves rural central Nevada and calls itself “The voice of the old West.”

Carl Brownfield is Radio Goldfield’s program director, and he spoke with The Nevada Independent in May about how community radio has served as a lifeline for some of Nevada's most remote communities — and a reflection of the hardscrabble individuals who call the area home.

Goldfield is a prime example of a boomtown. In the early 1900s, rich gold ore deposits were discovered in the area, leading to the town’s name. Rapid growth around the mining industry made Goldfield Nevada’s largest town at one point with more than 20,000 residents, and it was called home by legendary western figures including Virgil and Wyatt Earp.

But limits to the gold veins quickly surfaced, and by 1910 the town had shrunk to a quarter of its gold rush population peak. In 1923, much of the town burned down in a fire, and Goldfield never saw a significant population boom again.

More than a century later, Goldfield’s population has shrunk to about 300. There is no store in town, cell service can be spotty and getting reliable internet in rural Nevada has been a struggle for years.

The history of Radio Goldfield, as told by Brownfield, is convoluted. The station started as an unlicensed pirate station in 2006, broadcasting out of an old miner shack without a license from the Federal Communications Commission. But then-Senate Majority Leader Harry Reid helped the station acquire one, and after the station changed hands, he (with the financial help of a few friends) was able to build the broadcasting tower and give the station an official start in 2011.

The station produces 13 shows, many of which focus on music from bluegrass to rock and roll. But Brownfield says one of the most rewarding aspects is providing community news not only to the people of Goldfield, but also to surrounding rural communities including Beatty (located 66 miles south), Tonopah (26 miles north) and Hawthorne (130 miles northwest).

“We broadcast our community calendars for all four towns. The kind of announcements that are really important to us are school announcements, anything medical, we have the commodities program that comes through, and anything like COVID or (any other kind) of emergency,” he said.

Brownfield said that getting the community involved helps keep the station alive and provides more than just a resource for people to get information. As an example, he helped set up the high school in Beatty with audio equipment and programs so they could produce a weekly radio show called the “Beatty Buzz.”

Click here to listen to a clip of the student-produced show:

“I learned a lot from this,” Brownfield said. “If you can get locals or locals’ kids involved, they'll listen to you every day.”

Like many residents, Brownfield isn't native to Goldfield. Running the radio station is just the latest stop on a long journey that started in Downey, California and included a military tour in Vietnam, owning movie theaters in Minneapolis, raising four children and driving a taxi in Las Vegas for 21 years.

He hopes that Radio Goldfield will be his legacy.