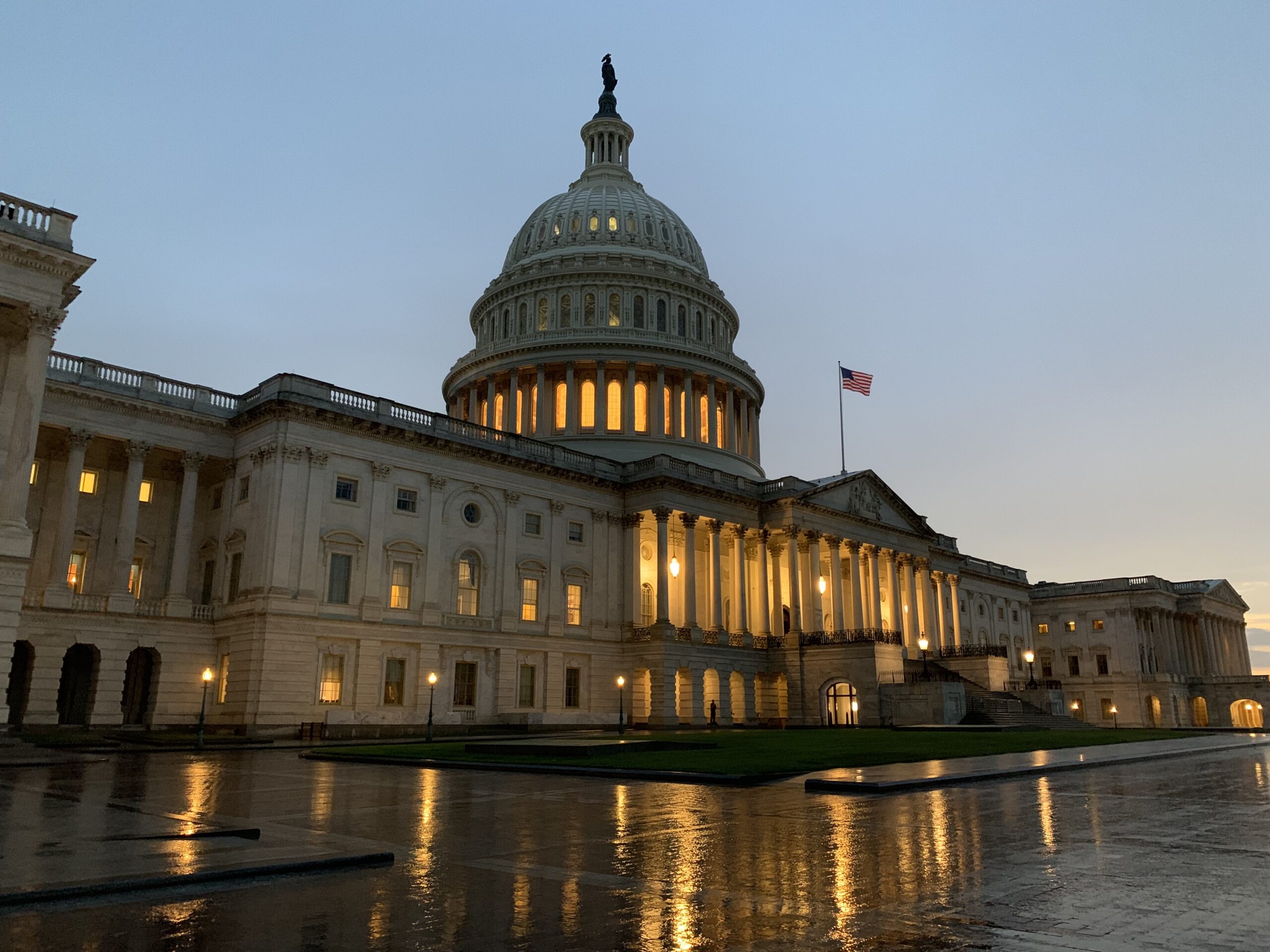 The U.S. House passed legislation on Friday to remove marijuana from the category of most dangerous drugs, but the bill faces an uncertain future in the Senate.

All of Nevada’s Democratic U.S. House members supported the bill.

“I always view cannabis as walking in the path of gaming,” said Rep. Susie Lee (D-NV) in a brief interview after the bill passed, noting that it took time for gaming to gain acceptance as a business in the eyes of lawmakers.  “Obviously it's important to education in our state, it’s been an important source of revenue, and basically normalizing the economy around it is really what this bill is about.”

Along with decriminalizing pot, the measure, known as Marijuana Opportunity Reinvestment and Expungement Act (or the MORE Act) included a five percent federal tax to help fund a program to expunge the records of those convicted of breaking marijuana laws. The tax would also pay for providing social services in communities hit hardest by the so-called war on drugs and support for loans for small businesses for those convicted of marijuana-related crimes.

Rep. Dina Titus (D-NV) had called on her colleagues to “puff, puff pass” the measure.

In a speech on the floor, Titus said the bill would help people of color as well as veterans who have been denied the use of marijuana for pain management and post-traumatic stress disorder. She also said Nevada — which legalized recreational use of marijuana in 2016 —  is an example for the nation. Twenty-seven other states have also decriminalized the drug.

Rep. Mark Amodei (R-NV) was not among the three Republicans who voted for the measure this week or when it came up in 2020.

He took issue with "blanket expungement" and was concerned that the measure could forgive serious crimes.

“It's the law until it's not the law,” Amodei said, adding that he would be open to a measure that looks only forward rather than backward.

In 2020, he raised concerns about supporting “legislation that directs tax revenue from marijuana sales toward indeterminate social engineering.”

The bill now goes to the Senate, where it’s unlikely to get the 10 GOP votes needed to overcome a filibuster.

The president's budget is an annual exercise where the administration highlights policies it wants Congress to pursue. Congress does not directly approve it. Instead, as a separate branch of government, Congress typically uses the budget as a guide and writes its own spending plan. Ultimately, the parties must compromise to enact the 12 annual spending bills to fund the government.

Biden's budget pledges not to raise taxes on individuals making less than $400,000 a year, but manages to reduce the deficit by $1 trillion over ten years by increasing the corporate tax from 21 percent to 28 percent. The request includes a 20 percent tax on households worth more than $100 million, affecting the top 0.01 percent of earners, according to a White House fact sheet.

The 20 percent tax applies to income and unrealized capital gains or asset growth.

Rep. Steven Horsford (D-NV), at a House Budget Committee hearing Tuesday, praised the budget for seeking to make the tax code, in his view, more equitable.

“If we want to invest in the American spirit and do so in a financially responsible way, then we need proposals like the 20 percent minimum tax to at least make sure billionaire CEOs pay a comparable rate to regular hard working Americans,” Horsford said.

The budget also would provide $773 billion for the Department of Defense (DOD), a 4.1 percent increase from the comparable 2021 level, according to the White House.

Amodei said that with 40-year high inflation, the high cost of gas, labor and other items used by the DOD, the defense department’s increased budget will quickly eat into its buying power, especially given that tensions are high with Russia over its invasion of Ukraine.

“It's not a great time to be crossing your fingers on defense stuff,” said Amodei.

His comments echo those of other GOP defense hawks. Sen. Jim Inhofe (R-OK) and Rep. Mike Rogers (R-AL), the ranking members of the Senate and House Armed Services Committee, respectively, said it amounts to a 5 to 8 percent cut to the Pentagon's buying power.

Federal defense funding is always of interest to Nevada. The Silver State is home to several military bases, including Creech Air Force Base in Clark County and Naval Air Station Fallon, home to the elite TOPGUN flight school and the Navy's primary facility to prepare all carrier air wings for deployment.

Sen. Jacky Rosen (D-NV), who sits on the Senate Armed Services Committee, and Lee, a member of the House Appropriations Committee’s Military Construction, Veterans Affairs Subcommittee, indicated that they are not opposed to having defense funding go up.

“The President’s Budget is a proposal and Congress will make final decisions about investing in our military and national security,” Rosen said in a statement provided by her office.

Lee said that lawmakers would assess through Appropriations Committee hearings whether the 4 percent increase proposed by Biden is sufficient.

“As we hear more about the needs of our military, my colleagues and I will determine whether 4 percent is enough,” Lee said.

The congressional offices of Sen. Catherine Cortez Masto (D-NV), in Las Vegas, Reno and D.C., have been staffed and open for business, according to spokeswoman Lauren Wodarski.

Her comments come after former Attorney General Adam Laxalt’s campaign claimed they had gone to her state offices and not found them staffed. Laxalt is looking to challenge Cortez Masto in the November election.

According to Cortez Masto’s office, signs at the entrance of her Las Vegas and Reno congressional offices that said her staff were tele-working and requesting visitors first schedule an appointment were mistakenly left up.

Her staff have been working in person in the state offices since April 2021, and have been taking in-person meetings and attending in-person events since June 2021. New signs have been put up directing constituents to ring the doorbell for assistance if the door is not open.

Laxalt also highlighted a video of Cortez Masto's D.C. office that showed it was closed. According to the senator's office, it was closed because it was after business hours.

“Any Nevadan seeking assistance may call or visit the Las Vegas, Reno, or D.C. offices during normal local business hours to speak with a representative,” her spokeswoman said.

After the meeting, Cortez Masto said she was pleased with Jackson’s background as a trial judge, which she said gave Jackson an understanding of the effect judicial decisions have on people. She told the Las Vegas Review-Journal that she will vote to confirm her nomination to the court.

“She's got, no doubt, the legal expertise that's necessary to sit on the bench, and I was very impressed with her,” Cortez Masto said.

If confirmed, Jackson would be the first Black woman to serve on the nation’s highest court. She spent eight years as a judge in the U.S. District Court for the District of Columbia. In 2021, she was confirmed to sit on the U.S. Court of Appeals for the D.C. Circuit.

Meanwhile, Biden issued an executive order Thursday invoking the Defense Production Act to spur the mining of critical minerals, including lithium, which could have significant impact on Nevada.

“Nothing in that executive order does anything about permitting,” Amodei said, adding that the only active domestic lithium mine is Silver Peak.

He pointed to the Rhyolite Ridge Lithium-Boron Project in Esmeralda County.

In February, the Fish and Wildlife Service issued a ruling that permanently zoned off 910 acres near the mine to protect Tiehm’s buckwheat. The move is not expected to affect the mine.

He also mentioned the proposed lithium mine at Thacker Pass, which has drawn opposition from environmental and native groups. Amodei said that he believes the National Environmental Policy Act (NEPA), the law that governs permitting, can be sped up without adverse environmental effects.

“Then you got the folks up at Thacker Pass, who are going through the permitting process of getting there,” Amodei said. “But there's nothing in that executive order, which is like, ‘okay, this is going to help get those things sped up,’ the NEPA process.”

S.3963 – A bill to protect survivors from brain injury by authorizing the Secretary of Health and Human Services to collect data on the prevalence of brain injuries resulting from domestic and sexual violence.

S.3977 – A bill to amend the Securities Exchange Act of 1934 to further enhance anti-retaliation protections for whistleblowers, and for other purposes.

S.3953 – A bill to amend the Higher Education Act of 1965 in order to increase usage of the Federal student loan income-based repayment plan and improve repayment options for borrowers, and for other purposes.

H.R. 7333 – To direct the Secretary of Education to establish a program to assist certain schools with respect to the implementation of wraparound services, and for other purposes.

H.R. 7295 – To amend the Internal Revenue Code of 1986 to provide an advanceable refundable credit for individuals who own or lease certain motor vehicles.