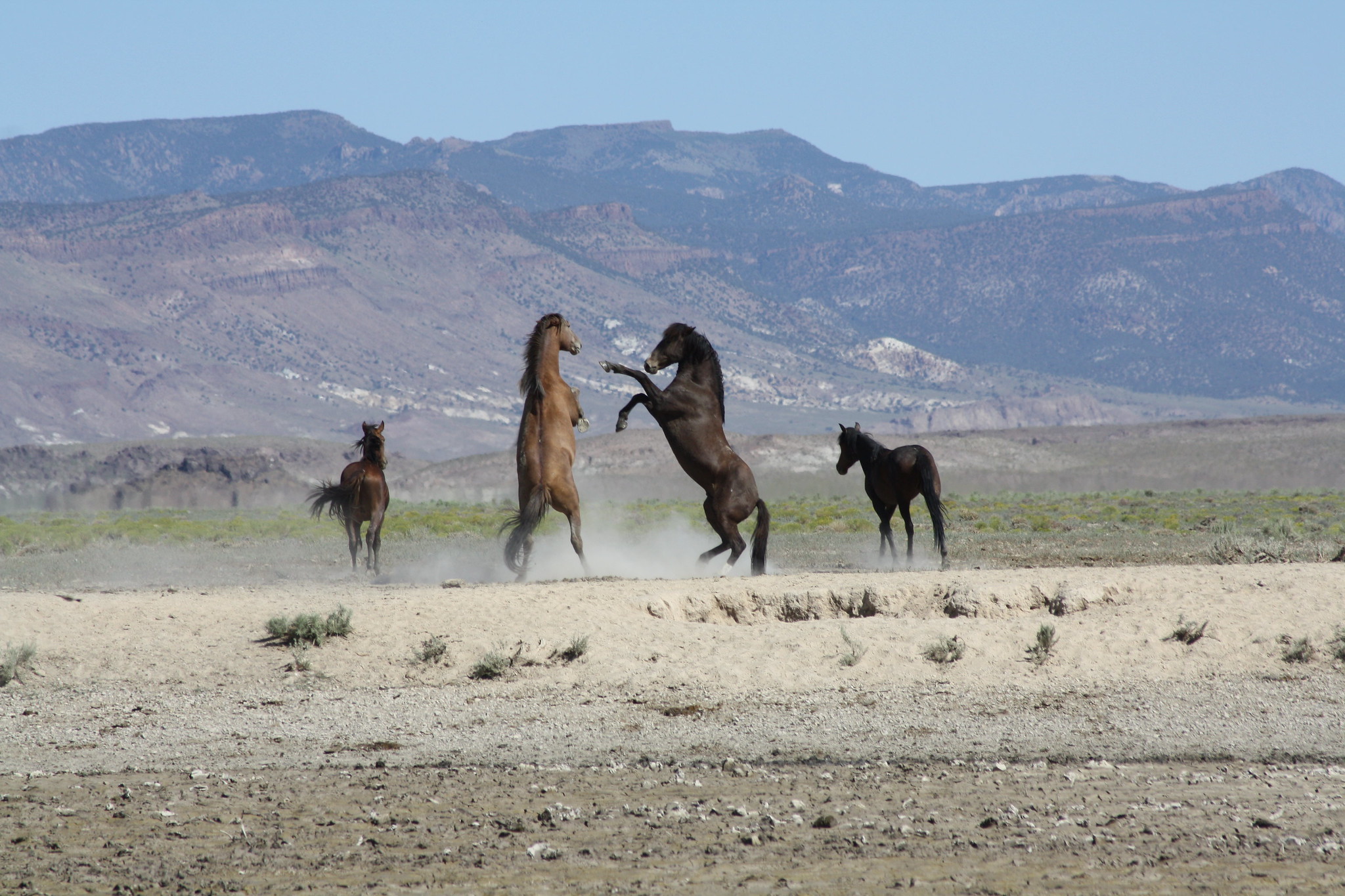 Hello, from the Society of Environmental Journalists conference in Colorado. I’m looking forward to meeting fellow journalists and picking up new tools for reporting on natural resource issues.

As Congress takes up wild horses, Nevada is front and center.

Of the roughly 88,000 wild horses and burros that roam federal public land, Nevada is home to more than half. And most people agree the current system of managing horses is not working.

Federal land managers say the population is about three times the amount that is sustainable for the range, a statistic that wild horse advocates challenge. They argue cattle have far greater effects on public land. But it’s not only ranchers who believe there are too many horses. Even some conservationists believe the range is too crowded with horses that trample habitat.

As a result, the U.S. Bureau of Land Management routinely rounds up horses that then live in corrals or pastures, all part of a “holding system” that has consumed the agency’s horse budget.

The debate is over what to do about that system.

The Senate Appropriations Committee recently approved an additional $35 million for the U.S. Bureau of Land Management’s horse budget. The move was the next step in funding a plan written by two interests that rarely see eye-to-eye: ranchers and animal welfare groups.

Supported by both the Human Society and the National Cattlemen’s Beef Association, the plan aims to decrease the horse population over time. It will increase roundups, but eventually rely on fertility control to decrease the population on the range. The Humane Society said that the plan will require a “commitment to more humane roundup procedures.” The current procedures are often criticized by advocacy groups. It also cast the compromise as a win because it avoids returning to a time in the early 1900s when horses were slaughtered across the West.

But the plan leaves out the oldest group of wild horse advocates.

The American Wild Horse Campaign has criticized the plan, with its executive director telling the Associated Press that it was “a sweeping betrayal of America’s wild herds by the nation’s largest animal welfare groups.” Other groups, like Animal Wellness Action, have slammed the plan as a giveaway to ranchers that will lead to more horses in captivity, threatening their welfare.

Crescent Dunes down: This is a big deal. Over the weekend, we reported that NV Energy was terminating its power contract with the operator of the Crescent Dunes Solar Energy Plant. The large-scale solar facility, outside of Tonopah, was billed as a marquee renewable project, able to deliver power day and night (unlike intermittent photovoltaic and wind turbines). But the facility had major operational issues, according to a lawsuit filed last week, and it failed to deliver what its contract promised. And that ultimately led to NV Energy’s decision to walk away. It is unclear what will happen to the plant — the original developer is accusing the Department of Energy of taking over (the federal agency issued a $737 loan guarantee in 2011).

Oil and gas leasing: The Bureau of Land Management (BLM) opened about 269,000 acres of public land to oil and gas leasing at a competitive auction on Oct. 1. But the agency received bids for only a fraction of that land: about 19,000 acres. That dynamic is nothing new but it is especially acute in Nevada. The BLM has routinely offered hundreds of thousands of acres of land with little industry interest. In a report this year, Taxpayers for Common Sense argued that low-cost leases have led to over-speculation and tied up public land that could be used for other purposes. The issue has led some members of Congress to talk about reforming the system.

Coyote Springs and the Colorado River: For the past two weeks, water lawyers, hydrologists and regulators have been debating the future of groundwater pumping in a collection of basins outside of Las Vegas. From an outsider’s perspective, they are arguing over a small amount of water, about one percent of what Las Vegas is allowed to take out of the Colorado River each year. But a large array of interests have a stake in the water, from the Southern Nevada Water Authority to Coyote Springs to North Las Vegas. When water is pumped, it can negatively affect priority rights on the Muddy River (a Colorado River tributary) and habitat for the endangered Moapa dace. I plan to write more about it, and what it all means, in the coming weeks.

Desert National Wildlife Refuge and 2020: In a Las Vegas Sun op-ed, former Housing and Urban Development Secretary Julian Castro said he was opposed to the Air Force’s proposed expansion into the Desert National Wildlife Refuge. The move comes after New Jersey Sen. Cory Booker, a presidential candidate, came out against the proposal on Public Lands Day.  Under the plan, the military would withdraw about 300,000 acres from the refuge and gain primary jurisdiction over about 800,000 acres, taking over from the Fish and Wildlife Service. Massachusetts Sen. Elizabeth Warren was the first announce her opposition to the plan.