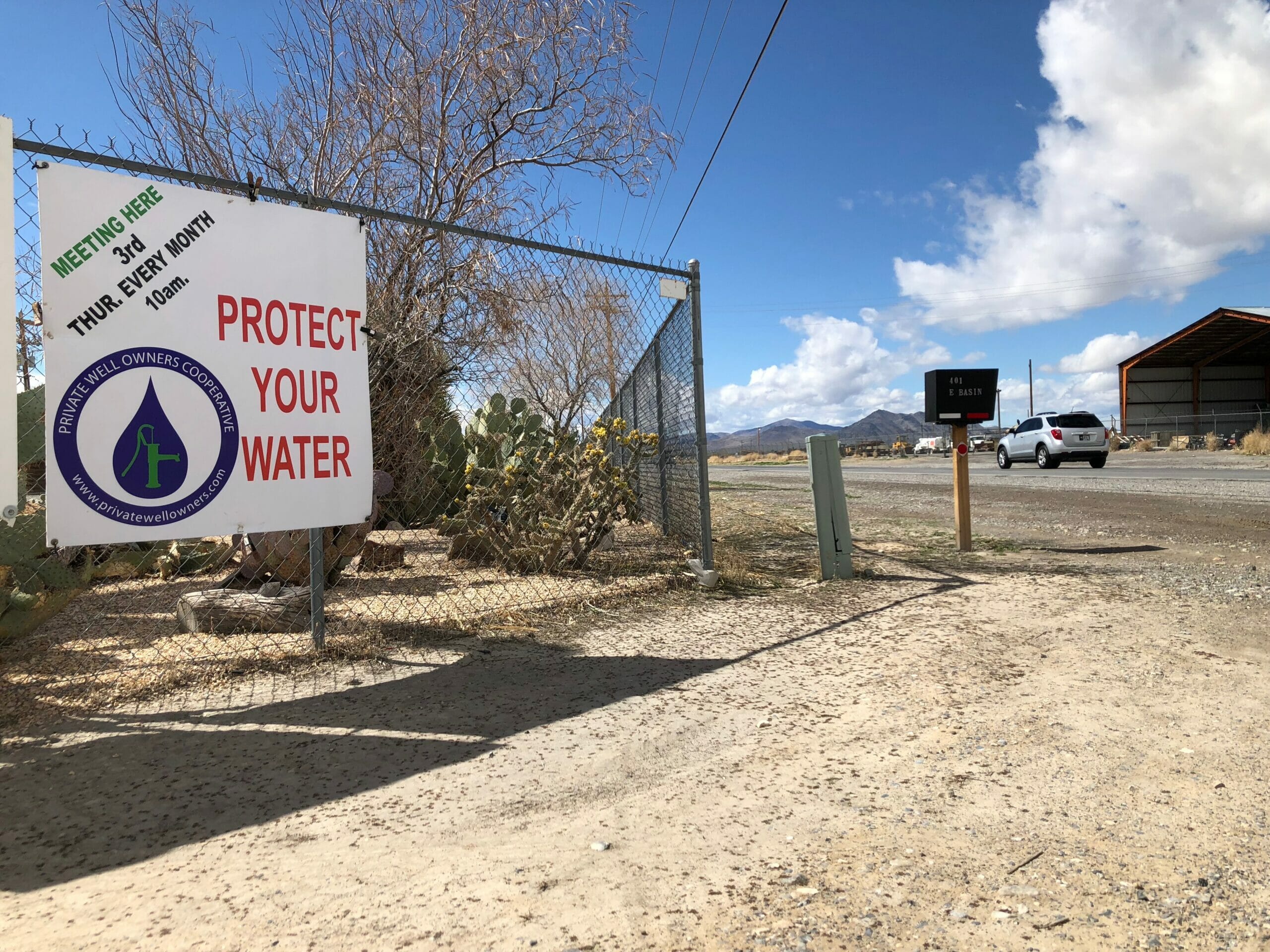 Mirroring a legal strategy that recently prevailed in Arizona, a mining watchdog and the Western Shoshone Defense Project sued the federal government last week over its decision to permit a molybdenum mine near Eureka. The complaint marks the latest challenge to a large open-pit mining proposal that has been the subject of federal and state regulatory appeals for years.

Earlier this year, a federal judge in Arizona halted construction of the Rosemont Mine after it had cleared federal permitting. Observers said that decision challenged the application of the 1872 Mining Law, which greatly restricts the ability of federal agencies to deny a mine on public land.

Now groups are hoping to persuade a Nevada judge to apply similar reasoning to the Mt. Hope Mine, a much-debated project to extract as much as 1.1 billion pounds of molybdenum near Eureka.

The recent legal complaint takes issue with a final decision issued by the U.S. Bureau of Land Management (BLM), the federal agency that is responsible for overseeing about 67 percent of the state’s land for multiple uses, including mining, ranching, recreation and conservation.

The groups cite similar issues that were at the heart of the Arizona case. That case revolved around whether operators could disturb public land even if they had not validated their mining claims.

Since permitting began more than a decade ago, groups have questioned the project's environmental footprint. In late 2016, the 9th Circuit Court of Appeals overturned an earlier federal approval of the mine and required the BLM to re-work its environmental analysis for the project. But the appellate court did not weigh in on several questions that could reemerge in the new case.

Bruce Hansen, the CEO of General Moly, the company that is developing the mine, released a statement on Tuesday. He said although the company is “disappointed by this recent legal challenge, it is not unexpected that the plaintiffs would again seek to challenge the work of the BLM. We are confident that the [decision] is technically and legally sound.”

Despite a similar appeal and some skepticism from the Nevada Environmental Commission about groundwater contamination, the mining project got a state regulatory approval earlier this year.

But in its recent court filing, the groups are also arguing that the BLM's decision to approve the mine fails to comply with several federal laws and regulations. Many of the lingering issues cited in the complaint revolve around the mine’s use of water. Its water consumption could dry springs and creeks to the detriment to the public, the lawsuit says. The lawsuit states that mining could make it more difficult for ranchers to graze cattle in the area.

Earlier this year, the mining company settled a dispute with a Eureka ranching family concerned about the effects of groundwater pumping on their priority water rights.

The legal issues at the heart of this case are far from settled. The Arizona case is already the subject of an appeal, and any future ruling could be appealed to the Supreme Court.

Here’s what else I’m following:

A military bill draft: The Washington Post obtained a copy of a bill draft that confirms a lot of what environmental groups have been arguing for two years about the military’s proposed expansion into the Desert National Wildlife Refuge near Las Vegas. According to the legislative proposal, about 1.1 million acres of the refuge would be used “primarily for military purposes.” Federal officials told The Post that the draft is still being amended and worked on. Several Democratic presidential candidates have come out against the plan. Last month, Rep. Steven Horsford said he would “do everything in my power to preserve this untouched habitat.”

In brief: On Tuesday, the Nevada Supreme Court heard oral arguments in a case over the state’s ability to regulate domestic wells. This case centers around the ongoing dispute over wells in Pahrump. But it could have far-reaching implications for what regulations the state can place on domestic well users, particularly in areas where water over-allocated. I haven’t listened to the oral arguments, but a few people flagged this in the course of other reporting.

It’s not the only Supreme Court case on the docket. Water users across the state are closely following how the Supreme Court will answer a question in a case concerning the Walker River. In effect, the court must weigh in on the state’s legal responsibility to protect water resources as the public’s trustee of the environment. Its answer, depending on how its worded and implemented, could affect existing water rights.

Then there is the pipeline: Yet another court hearing is scheduled to begin next week in Ely on the Southern Nevada Water Authority’s proposed plan to pump rural groundwater to Las Vegas. Because of conservation efforts in Las Vegas, the proposed pipeline — on the table for 30 years — has never been constructed and water authority officials have said it won’t be needed for decades. But the water authority is continuing to pursue entitlements to keep its options open. Next week, a White Pine County court will hear arguments over water rights for the project. At issue is a complex ruling by Nevada’s top water regulator, the state engineer, last fall. In the decision, the state took the unprecedented step of saying that it would appeal its own ruling in an effort to challenge a prior court decision. This case is unlikely to end in White Pine County, and it is likely to go to the state Supreme Court. Opponents of the pipeline plan to hold a rally in Ely Tuesday morning.

Scrubbing the web: The Reno Gazette Journal reported this week that state officials removed information about a sacred site that several tribes argue is threatened by the proposed pipeline. The Department of Natural Resources and Conservation said that the information was removed after it received concerns from the National Park Service. The state agency said that the action was meant to protect the site from looting.

But the information was removed without consulting the tribes involved, and the timing raised further concerns about whether it was related to hearings about the pipeline. The issue strikes at broader questions about how the state communicates with federally-recognized tribes, sovereign nations. “The tribes are the last to be contacted and sometimes not at all even though we are the subject matter of it,” a lawyer told the newspaper.

The Clark County climate: Following Reno, Clark County is looking to coordinate its efforts around addressing the effects of climate change. Last month, Clark County joined the County Climate Coalition with a resolution aimed at reducing greenhouse gas emissions. It comes after Commissioner Justin Jones pushed a package of climate-related proposals to organize regional efforts around the issue. The county plans to do a sustainability audit and hire a manager for its Office of Sustainability. In an interview, Jones acknowledged that the county is lagging behind the city of Las Vegas and the city of Reno on this issue, in terms of its policies. But he also said that tackling the problem would require a regional planning effort. “Unless all of the municipalities and the county are headed in the right direction, it's going to be hard to meet carbon reduction goals.” he said.

I’ll have more on this to come.

Oil and gas sales: Several municipalities and local officials (Mesquite City Council, Henderson mayor, etc…) in Southern Nevada wrote letters to the BLM opposing an oil and gas lease. The Review-Journal has the full story on their concerns. Spoiler alert: They have to do with water.

The buckwheat: A few weeks ago, we brought you a story on the conflict between a lithium mine and a rare buckwheat that could receive protection under the Endangered Species Act. Last week, the Center for Biological Diversity (the group looking to protect the plant) sued the federal government, arguing that exploration activities already taking place at the site are harming the plant’s habitat. The Associated Press has more on the lawsuit.

On Wednesday, mining company and the Center for Biological Diversity reached a temporary settlement to halt any new ground disturbance for at least 35 days. That agreement would give the court time to hear a motion for a preliminary injunction.

The water district: Last week, we published a story about the board of a public water district that serves Tesla and other high-profile companies at the Tahoe Reno Industrial Center. The entire water district board resides at a brothel owned by Lance Gilman, the face of the industrial park. All three public board members report income from at least one of Gilman’s companies.

The governance structure of the water district raises questions about conflicts and oversight as the political subdivision takes on a greater role, negotiating with the state and municipalities over a pipeline deal. In recent years, the board has voted on complex water rights agreements.

The issues are similar to those with South Lake Tahoe’s sewer district in 2016, a governance structure that prompted an inquiry from the Douglas County district attorney and led to reform at the Legislature.

We attended a public board meeting this week, and we will bring you that report in the coming days. But for now, here is a Twitter thread summarizing our key findings and our initial story.

If you have any tips, documents or suggestions, send them to [email protected]. Please message me for my Signal or PGP. If you want to submit anonymously, here are instructions.