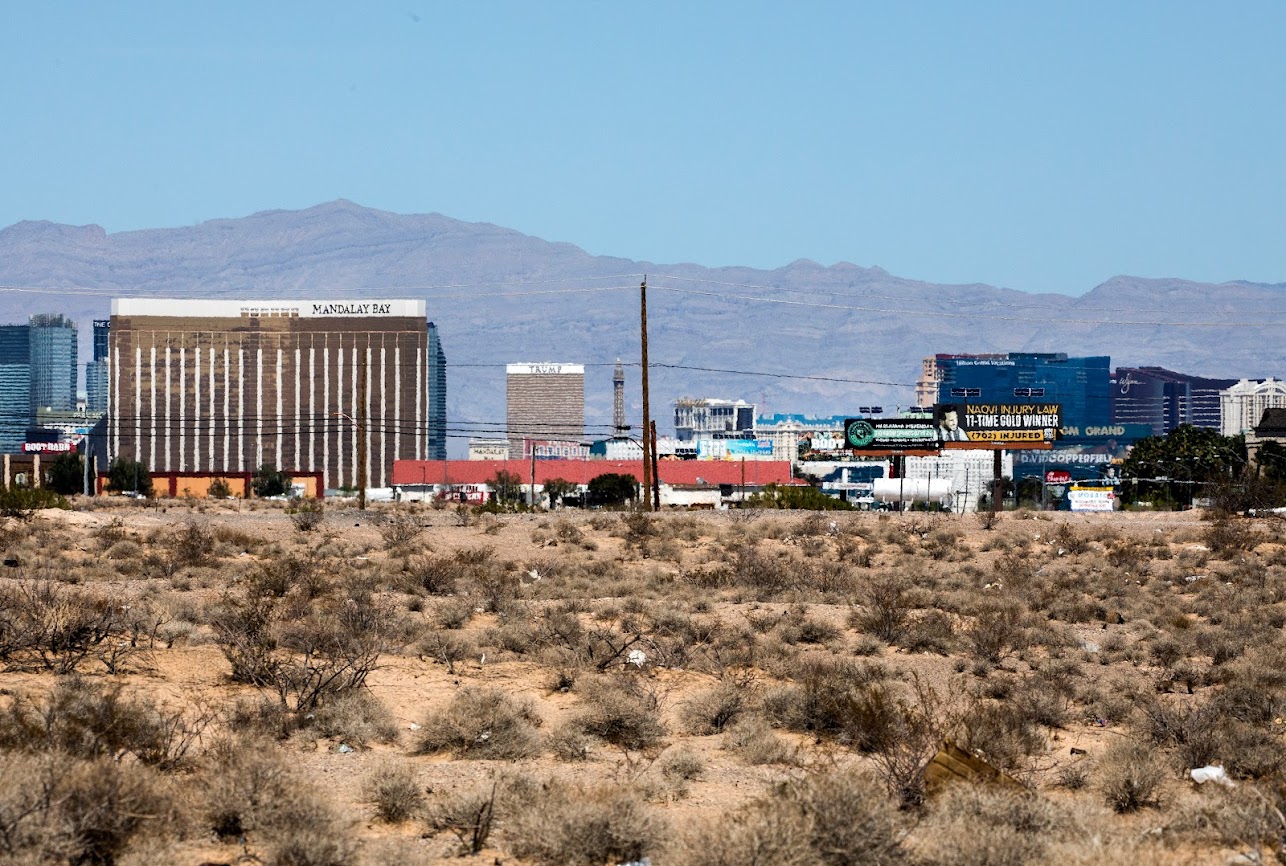 Note: There will not be an Indy Gaming newsletter next week. Indy Gaming will return on July 13.

Marc Badain said he hasn’t spoken “personally” to either James or Mayweather. But he understands their curiosity and why he might eventually receive a phone call.

Badain, former president of the Las Vegas Raiders until his resignation last year, has gone from consultant on a planned 20,000-seat sports arena south of the Las Vegas Strip to the project’s president. He is now tasked with building the entertainment venue for Los Angeles-based Oak View Group.

In the same June 15 announcement, Oak View named longtime Strip resort executive Randy Morton as president of the hotel-casino portion of the project, estimated to cost $3 billion and will encompass 25 acres at the intersection of Las Vegas Boulevard and Blue Diamond Road.

The move by Oak View, which has built multiple arenas and entertainment projects in the United States and Canada, was seen as an acceleration in the Las Vegas facility’s timeline. Oak View said it hopes to begin construction next year.

For now, there are no designs or artist renderings of the proposed project. Just an empty 25 acres of desert that serves as a blank canvas.

“We’re in the early stages of what is obviously going to be an integrated resort where the boutique hotel, the casino and the arena are all interconnected,” said Morton, who spent almost two decades as president of Bellagio.

Badain, who oversaw the development of the $1.9 billion Allegiant Stadium on behalf of the Raiders, said the concept being discussed would closely link the arena to the hotel-casino.

“This unprecedented project is an industry game-changer, but to do it right, that means putting the best team in place,” Leiweke said in a statement.

Badain said the Las Vegas arena will be built to NBA specifications, but it’s not predicated on housing a team.

Scott Goldstein also operates Las Vegas-based Prospect Street, which acquires, develops and manages commercial real estate. He could not be reached for comment as to the company’s plans for its 41 acres.

Badain said the Oak View project sits at the southern end of some 300 acres that could eventually include a station for a long-planned high-speed train connecting Las Vegas with communities in Southern California, a potential stadium for a Major League Soccer franchise and other potential developments.

“That’s the exciting part. A lot of times these projects have ancillary development but you don't know if they're ever going to be built and who's going to develop them,” Badain said. “I think you are going to see the creation of some sort of village both around the arena and the entire 300 acres.”

Oak View’s site is roughly 3 miles south of Mandalay Bay, considered the Strip’s southern border. Badain also noted the site’s proximity to Harry Reid International Airport and development along the east side of Las Vegas Boulevard, including an outlet mall and restaurants.

The development of Allegiant Stadium – from the land acquisition in May 2017 to the first Raiders game in 2020 — took roughly 36 months, with about two years for construction. Badain expects a similar timeline for the arena and resort, which Oak View said in its original announcement wouldn’t open until 2026.

“We were very fortunate in the acquisition of the land,” he said. “Like Randy said, we’re in the preliminary stages of design. We have had meetings with the county regarding entitlements and what we need to provide for them. We have our marching orders and we're going forward and executing those plans.”

Morton, whose hotel experience also includes an executive position with Four Seasons Resorts and as president of Monte Carlo (now Park MGM) on the Strip, said he is working with the design team at Gensler and Populous to “focus on the master-planning and in the design and development of a luxury boutique hotel-casino.”

The hotel is planned for 2,000 rooms, but Morton said it’s too early in the planning stages to determine if Oak View would work with a hotel company or an outside casino operator on the project. Many concepts and options would be considered.

“This is a tremendous opportunity,” Morton said. “Tim Leiweke has a very clear vision on luxury and my job, and Mark's job, is to execute that vision.”

Prior to joining Oak View, Morton spent a year with Foley Entertainment Group (owned by Vegas Golden Knights owner Bill Foley), which included work in arena operations at the new Dollar Loan Center arena in Henderson and overseeing the operations of Hotel California in Santa Barbara.

Oak View also announced that former Wynn Macau executive Patrick Crockett had joined the project as a financial consultant to the hotel and casino.

“Marc, Randy, and Patrick’s leadership, robust experience, and proven track records will be instrumental in helping bring our vision to life,” Oak View President of Business Development Francesca Bodie said in a statement. “Each understands what it takes to develop, build, and open a world-class entertainment destination.”

Freeman has a deep understanding of the Washington, D.C.-based organization that promotes travel in America. He served seven years as the association’s No. 2 official before joining the AGA in 2018. He also brings his knowledge of both Las Vegas and the gaming industry nationwide to U.S. Travel.

“I believe it’s absolutely advantageous for Las Vegas to have someone who’s so familiar with the gaming industry serving as CEO of the U.S. Travel Association,” Clark County Director of Aviation Rosemary Vassiliadis said in a statement.

Las Vegas has had close ties with U.S. Travel over the years. Las Vegas Convention and Visitors Authority CEO Steve Hill is a member of the association’s board, while former CEO Rossi Ralenkotter spent two years as chairman in the early 2010s.

During his time at U.S. Travel, Freemen advocated for a legislative campaign that resulted in the passage of the Travel Promotion Act. The law led to the creation of Brand USA – a public-private partnership that helped the U.S. travel industry capture a larger share of the international travel market.

Freeman’s other accomplishments included leading the industry effort behind the creation of TSA PreCheck and establishing the Meetings Mean Business Coalition.

“Geoff is highly regarded in Washington and well known across our industry for his strategic work to conceive campaigns and programs that opened new pathways for growth in the travel economy,” said Carnival Cruise Line President Christine Duffy, the current chairperson of the U.S. Travel board. “Now, returning to lead the association, Geoff will continue bringing a fresh and strategic approach to advancing the mission of U.S. Travel in its next era.”

U.S. Travel represents all components of the nation’s travel industry. According to the organization, travel generated $1.5 trillion in economic output in 2020 and supported 11 million jobs, a decline from pre-pandemic figures.

In Las Vegas, the gaming and travel industries praised the Biden administration’s decision earlier this month to end a requirement that international airline travelers to the United States submit a negative COVID-19 test prior to departure. They said the move was another step in bringing back a key Las Vegas visitation component.

The LVCVA has long touted international visitors as an important component in the region’s overall tourism profile, primarily because they stay longer and spend more.

It was one of two significant segments, along with convention business, that had all but disappeared during the pandemic.

Freeman will replace outgoing CEO Roger Dow on Sept. 1. Dow is retiring after 17 years with the organization.

Freeman left the AGA to become CEO of the Consumer Brands Association, a Washington, D.C.-based organization that represents the $2.1 trillion food, beverage and consumer product industry.

Freeman was just the second CEO in the AGA’s history. Over his tenure, membership grew along with an expansion of casinos in the U.S., while also expanding the AGA’s membership to tribal gaming entities.

After leaving the AGA, Freeman joined the board of Las Vegas-based gaming equipment provider AGS.

“There are few industries more essential to the nation’s economy, more connected to consumers, and more critical to bringing Americans together than the travel industry,” Freeman said in a statement. “I believe U.S. Travel’s talented team can continue to raise the bar, and I’m excited to roll up my sleeves and get started.”

Speaking of international travel, the Las Vegas Convention and Visitors Authority said Mexico and Canada again supply the largest number of international customers to Southern Nevada on an annual basis.

But since 2020, international travel restrictions and health and safety protocols brought on by the pandemic have shaken up the rankings.

The largest single-year total for international visitors to Las Vegas was just under 6 million in 2014.

The information, broken down by country and region, came from Global City Travel and was based on market origin.

Prior to the pandemic, several other countries, including Australia, China, South Korea and Japan often traded places for the No. 4 through No. 6 slots.

The 20-year concessions were set to expire last Sunday. However, the Macau Legislative Assembly a week ago adopted the Special Administrative Region’s new gaming law. The six operators are expected to apply for new 10-year gaming licenses that also allow for three-year extensions under certain circumstances.

The extension of the current licenses until the end of the year keeps Macau’s casino industry uninterrupted while the government works on procedures to launch the application process for new concessions later this year.

Macau’s casino market, however, is suffering after the region detected another COVID-19 outbreak, which has all but halted visitation because of China’s “zero-COVID” policy. The government said it will not order casinos to close despite mandated testing of more than 600,000 residents along with continued stay-at-home orders.

Most of the city’s leisure facilities, such as theaters, clubs and beaches, have closed.

Macau Chief Executive Ho Iat Seng told Asian media outlets the casinos would remain, but the situation will continue to be evaluated.

On Tuesday, CNBC reported that China would shorten the quarantine period for international travelers from 21 days to 10 days.

Macau casinos collected $10.8 billion in gaming revenue in all of 2021, an increase of 43.7 percent over the nearly $7.6 billion collected during pandemic-ravaged 2020.