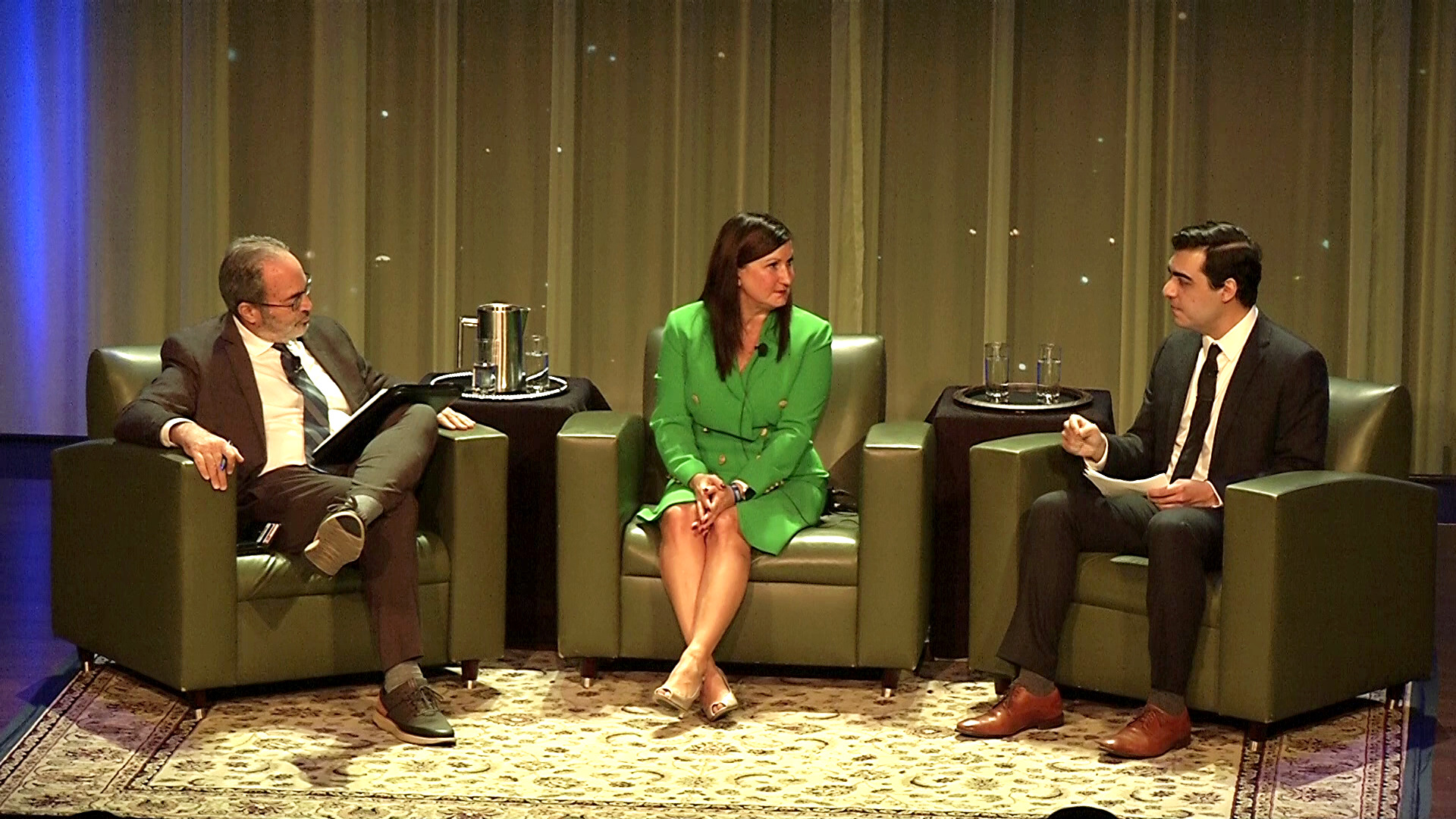 Roughly a year and a half into her tenure at the helm of the Nevada System of Higher Education, Chancellor Melody Rose has already navigated the effects of a global pandemic and a legislative session that saw the system lose roughly $76 million in cuts to its operational budgets.

But she described herself as “relentlessly optimistic” about the future of higher education in Nevada.

“We have experienced major economic setbacks… We're going through a racial reckoning that is long overdue. And we're facing environmental catastrophe as a world, and so there are no shortages of challenges,” Rose said at an IndyTalks event hosted by The Nevada Independent on Monday. “I tend to be the person who runs into the burning building and with purpose, not with recklessness, because I believe as a first-generation college student, that there is no higher purpose for me than serving those 107,000 students and opening doors for them.”

In the interview at The Smith Center in Las Vegas, Rose said she is focused on expanding educational attainment among Nevadans, helping diversify the state economy and protecting the health and safety of local communities, with vaccine mandates in place for college staff and teachers.

Editor’s Note: Last month, Rose filed a hostile work complaint against two top regents. Because the investigation into that complaint is ongoing, Rose declined to answer questions about the complaint.

Rose, who previously served as chancellor of the Oregon University System and came to the Nevada System of Higher Education (NSHE) in June 2020, said the top issue that attracted her to the position was the state’s low rate of high school graduates who directly enter a higher education institution.

In a state with a low rate of educational attainment — Nevada ranks near the bottom of the country in terms of its percentage of the population with a college degree — Rose said she hopes to build a “college-going culture.”

But she acknowledged that major challenges remain a barrier to that goal, including a decline in the college-going population nationwide and a statewide culture that does not always value higher education.

“We have fewer college-age students going to our campuses nationally every year for the last decade,” Rose said. “So that aggregate decline is already well underway, and it's expected to accelerate in 2026. Why? Because that's when the folks who were born during the Great Recession would be expected to show up on our campuses — [the] birth rate went down in 2008.”

Still, Rose said she expects Nevada’s higher education enrollment to remain more stable than in other states where population growth has lagged. But she said NSHE will have to be “strategic about enrollment management” and target certain populations, including the Latino community and adults who have completed some college but do not have a degree, in order to grow the state’s college-going population.

Rose said the latter of those two groups has special needs that are different from those of the average 18-year-olds that arrive on campuses, and those needs are not being met.

“I'm optimistic just because I understand where the growth opportunities are,” she said. “We will focus on those populations with unmet needs that we can uniquely solve.”

In order to change a culture that does not value a college education as highly as many other states, Rose said she is targeting the lower ranks of K-12 education.

“You have to be willing, as chancellor, to go into classrooms of second graders and begin to talk to them about what it means to go to college,” she said.

Rose also said NSHE will be working to gather community input on its operations and will host listening sessions throughout the state to set “measurable goals that hold us accountable, for which we are transparent.”

As many college and university students in Nevada and across the country face rising costs for education each year, Rose said she heard about three main cost barriers when speaking with students in Northern Nevada: public transit, child care and food security.

“Those are three demands that current and future students are going to place on us that we have not addressed as a system nationally,” Rose said. “So I think we need to pivot in terms of what we are looking at in terms of services and the needs of our students.”

Rose said the costs of college are particularly burdensome for low-income families with no historic ties to higher education, which is similar to the one she grew up in. Rose hinted that large-scale changes could be necessary because of those high costs.

“We have a profound obligation to reconsider our business model and to understand ways to bend the cost curve,” Rose said.

As Nevada recovers from a recession that saw unemployment spike to a record high, Rose said NSHE will be the key to diversifying the economy, especially in Southern Nevada, which continues to face the highest levels of unemployment in the nation.

“As you look to bring new companies into our community, what are the questions they ask leaders? They say, ‘Where are my kids going to go to school?’” Rose said.

With unemployment still particularly high in the hospitality industry, Rose said the workforce within that sector may never fully come back. But she sees that as an opportunity to diversify, with corporate partnerships playing a big role in the change.

“The imperative for economic diversification is to have a diverse portfolio so that we have our eggs in multiple baskets,” Rose said. “In order to diversify to bring new industries that are not here yet in Southern Nevada — frankly, the way that Northern Nevada did after the 2008 Great Recession with Tesla and Panasonic and others — what you have to do is work with higher education.”

During the 2021 legislative session, lawmakers cut roughly $76 million from NSHE’s billion-dollar budget as the state faced financial shortfalls from the pandemic. Rose said those cuts would have entirely been used to aid students.

Rose focused on the ratio of advisers to students, because those positions help with student retention and completion by connecting students with services and providing them guidance.

Despite the cuts, Rose said NSHE has a budget that is around the national average per pupil, but the question is, “Do we want to provide even more than we are currently doing?” Doing more requires a greater investment, she said.

With millions of new federal dollars flowing into NSHE via the American Rescue Plan, Rose said that even one-time investments can make a big difference in the quality of education.

“Whether it's building or equipment in a nursing program or dentistry program, those may be one-shot dollars, but they improve the student and the faculty experience for many years to come,” Rose said.

Rose also said there are parts of the state’s funding formula for higher education that need fixing, including how there is no appropriation for students working toward short-term certifications at community colleges.

“The ones that are designed to retool and get somebody back out on the job site are not funded through the state appropriation. That's something we need to fix,” she said.

The chancellor said she is proud of how NSHE has handled the pandemic and that it was the right call to require students and employees to be vaccinated, especially as there is not a “playbook” on how to best manage a pandemic.

Regents recently mandated the vaccine for students and employees. Students will not be eligible to enroll in in-person classes for Spring 2022, and employees risk receiving a termination notice on Dec. 1, if they are not vaccinated.

According to Rose, NSHE was among the first 20 percent of higher education systems in the nation to make a determination regarding the vaccination. As of Nov. 15, Rose said that 88 percent of NSHE employees are fully vaccinated and 1 percent of employees have been granted an exemption for religious or medical reasons.

About 2,300 NSHE employees remain unvaccinated, and could potentially receive the termination notice next month that would go in effect on Dec. 31. But she said the numbers recorded are not capturing the people who are partially vaccinated — received one dose of the two dose vaccines.

“I would be very sad if any NSHE employee chose to depart our institutions over this issue. We're always sad to see employees go for whatever reason, but I have, still, a lot of faith,” Rose said. “I have a lot of faith that we're going to get pretty darn close to complete vaccination by the time that you need to, on the employee side.”

She said the “complexity in the data” makes it harder to report student vaccination rates consistently, as numbers of students returning the following semester change and new students come in.

Question 1 and the Board of Regents

Though Rose said she was “not hired to opine on governance structures,” she said she voted against Question 1 — a statewide ballot measure that, if it had passed, would have removed the Board of Regents from the Nevada Constitution. The measure failed by a slim margin.

Rose also said she has no plans to leave her position.

“I am here because I have the best job in the state of Nevada,” she said. “I say that, and it's not hyperbole. To be an advocate on behalf of 107,000 students across the state is the most unbelievable privilege.”