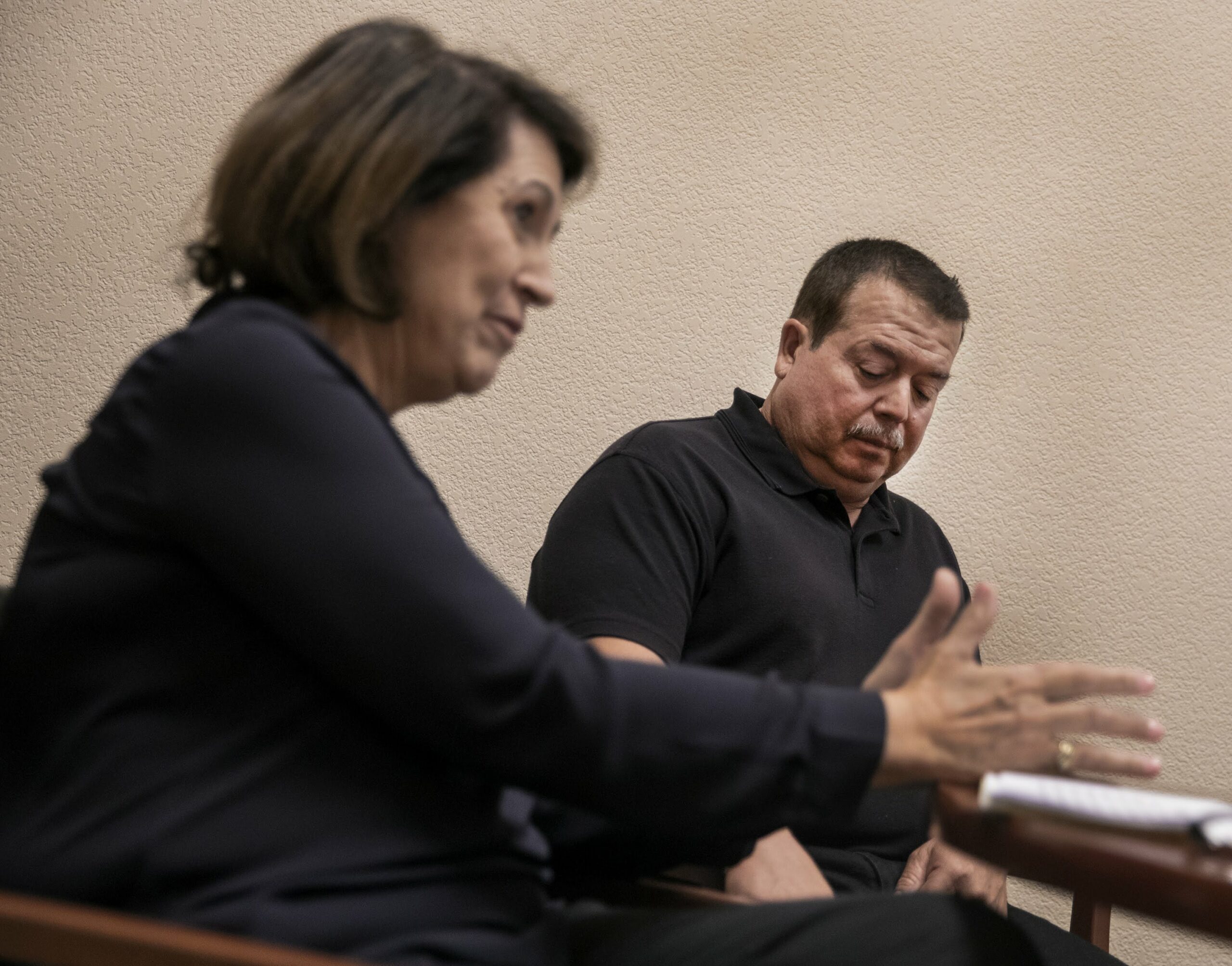 It was May 20 in a Las Vegas courtroom, when it was finally settled that 51-year-old Mario Escobedo-Gonzalez had been born in the United States.

That declaration was no small thing for Escobedo, who has been denied schooling, kept away from his ailing mother and even jailed over questions about whether he was born north or south of the Rio Grande.

Doubts about his birth certificate, compounded by overarching suspicion in the government about the particulars of midwife-assisted births along the U.S.-Mexico border, landed him in deportation proceedings three decades ago and prompted the State Department to deny him a passport in 2015.

“It's really a bizarre situation,” his lawyer, Eva Garcia-Mendoza, said in a recent interview at her Las Vegas office. “They can't deport him, but he can't leave the United States because he doesn't have a U.S. passport. So he was like a man without a country.”

Now, Escobedo — who was throughout his childhood called a “gringo” because his family understood him to be born in America — is vindicated. He can carry on the life he’s lived in Las Vegas since the 1990s and travel freely to the country where he grew up.

“From the first time that I came [to the U.S.] I felt that here was my country,” he said in Spanish. “My whole life is going to be here with my grandchildren… here we’re very happy.”

Escobedo’s story starts in 1968, in a small, two-bedroom house in Brownsville, Texas in the middle of the night, according to findings of fact approved in federal court. His mother had made the journey across the border from Matamoros, using a friend’s ID card, as soon as she knew Mario’s birth was imminent.

Escobedo’s father had already enjoyed legal status for years picking cotton and lettuce in California and Texas. He was part of the Bracero program, launched in the 1940s to bring Mexican laborers into the U.S.

The couple had made a two-day bus trek from the tiny town of Apozol, Zacatecas, to Matamoros while his mother was pregnant, only to wait for several more weeks on the Mexican side of the border until her time came. A midwife named Alejandra Hernandez helped usher the baby into the world at 1 a.m. and helped obtain a Texas birth certificate for him.

The family crossed back into Mexico and stayed several weeks in Matamoros before getting on the bus back to Apozol. While recuperating in the Mexican border town, they encountered an acquaintance from their hometown and apprised that person of Mario’s birth.

With no phone service in their tiny village, the message carried from that acquaintance to Southern Mexico was the first communication of the news.

But enthusiasm over the new arrival apparently went too far. A relative named Doroteo Duran registered the birth with Mexican authorities without direction or permission from Mario’s parents, documenting the birth of a “Martin Escobedo” on Feb. 15, 1968, in Apozol, according to court documents

Mario didn’t know about the superfluous birth certificate growing up in Mexico, but it would come back to haunt him for much of his adult life.

When he was 17, Mario tried to enter the U.S. in Laredo using his Texas birth certificate. But he was questioned by the officer at the border, who denied him entry.

A few months later, he reentered the U.S. through Houston by air. He again presented his Texas birth certificate and this time was admitted to the country.

But once he tried to apply for a passport, he was placed in deportation proceedings. The government considered his birth certificate a fraud.

“I remember it very well,” Escobedo said. “There were two big guys and they told me, ‘You know what? Tell us the truth, or we’re going to throw you in jail for five years.’”

As it turns out, Alejandra Hernandez — the 70-year-old midwife who assisted in his birth — had admitted under oath to an immigration investigator in 1968 that she had falsified the birth certificate of a child named Juan Carlos de Leon. She was given probation and fined $50 for furnishing false information.

She also turned over to the investigator a set of eight pocket notebooks with the names of babies she had helped deliver, many marked by checks and crosses. And she gave authorities conflicting information about when she stopped delivering babies, saying at one point that she stopped delivering after the December 1967 death of her husband and on another occasion that her final delivery was of a stillborn baby in about 1966.

The whole case put Escobedo’s birth under a cloud. He was held in immigration detention in Houston for two months along with other people who were going to be deported, and they set bail at $10,000 — too high for him to afford.

A judge later reduced bail to $1,000 and ordered that, because of the confusion in the case, his mother should testify in court. An uncle loaned the money to bail him out

During his deportation proceedings, the government indicated there was a flag attached to his birth record, noting that Hernandez had said she hadn’t attended a birth. But it didn’t specifically say the birth was Escobedo’s.

At trial, Escobedo’s mother testified about their journey from Southern Mexico to the U.S., about the house where he was born, and that she had not authorized her brother-in-law Doroteo Duran to file for a Mexican birth certificate on behalf of her son.

Brothers came to the trial, telling the court that they had never known their brother to go by the name “Martin” and that it was always understood that he was an American-born “gringo.” Three different school records were presented showing he only ever went by the name Mario.

The proceedings continued for much of 1987 until Immigration Judge Stephanie Marks issued a 12-page decision, concluding that Escobedo had established with clear and convincing evidence that he was born in Brownsville. Declaring him a U.S. citizen, she closed the case.

Mario went on with his life, moving to Las Vegas, taking a job in construction, marrying and starting a family. He was approved for passports in 1995 and again in 2005, each for a period of 10 years.

But the trouble began again when he applied for a renewal in 2015. In spite of the immigration judge’s decision, the State Department started asking for more details, bringing up the same questions they posed in 1987, and ultimately denying him a passport on those grounds.

Escobedo is not alone — births along the U.S.-Mexico border have come under greater scrutiny in recent decades. In 1992, the U.S. government began an investigation in the area stemming from a high incidence of citizenship fraud.

The probe found that midwives falsified and sold at least 900 U.S. birth certificates for children who were born in Mexico. It led the Bush and Obama administrations to deny passports to people born with the help of midwives in Texas’ Rio Grande Valley.

That, in turn, triggered a class action lawsuit in 2008 from the American Civil Liberties Union, which accused the government of denying passports to people based on race and ancestry, and the fact that their births were attended by midwives.

The following year, the Obama administration and the ACLU arrived at an agreement to implement focused procedures aimed at ensuring a fair review of passport applications for Mexican-Americans whose births in Texas were attended by midwives.

But the problem persists. In 2018, The Washington Post reported that the Trump administration was accusing Latinos born on the border of using false birth certificates since they were babies. The State Department responded that the border is a hotbed for citizenship fraud and that their procedures hadn’t changed.

Escobedo encountered similar, heightened scrutiny. When the State Department sought further documentation of his birth in 2015, his lawyer sent them the immigration judge’s decision from 1987.

The State Department bypassed counsel, instead writing directly to Escobedo asking for more documentation and making the same allegations he had faced in the 1987 deportation proceeding. (The State Department did not respond Friday to a request for comment about Escobedo’s case.)

Garcia-Mendoza requested the cassette tapes of the 1987 court proceeding and had them transcribed as they fought once again to prove he was born in America.

A trial was held May 20, during which Garcia-Mendoza noted that Escobedo’s mother was very ill and that he couldn’t see her because he lacked a passport. Federal Judge James C. Mahan ruled from the bench in favor of Escobedo.

“The judge said on the spot … he is citizen. I want his passport issued as quickly as possible because I want him to see his mother before she died,” Garcia-Mendoza said.

Among the court’s findings: Under the “oldest public document policy,” the Texas birth certificate is more reliable than the Mexican birth certificate because it is older, and no government authority notified Mario’s parents that his birth was in question based on Hernandez’s statements; they were not given a chance to challenge that claim.

The State of Texas eventually removed the flag on Escobedo’s birth certificate on its own volition, determining that Hernandez’s claim of not attending the birth was unsubstantiated.

Escobedo has been in the clear for months now. But the helplessness of not being believed — and the prospect of life-altering consequences that could come from losing to the government — still rattle him.

“I still feel nervous,” he said.