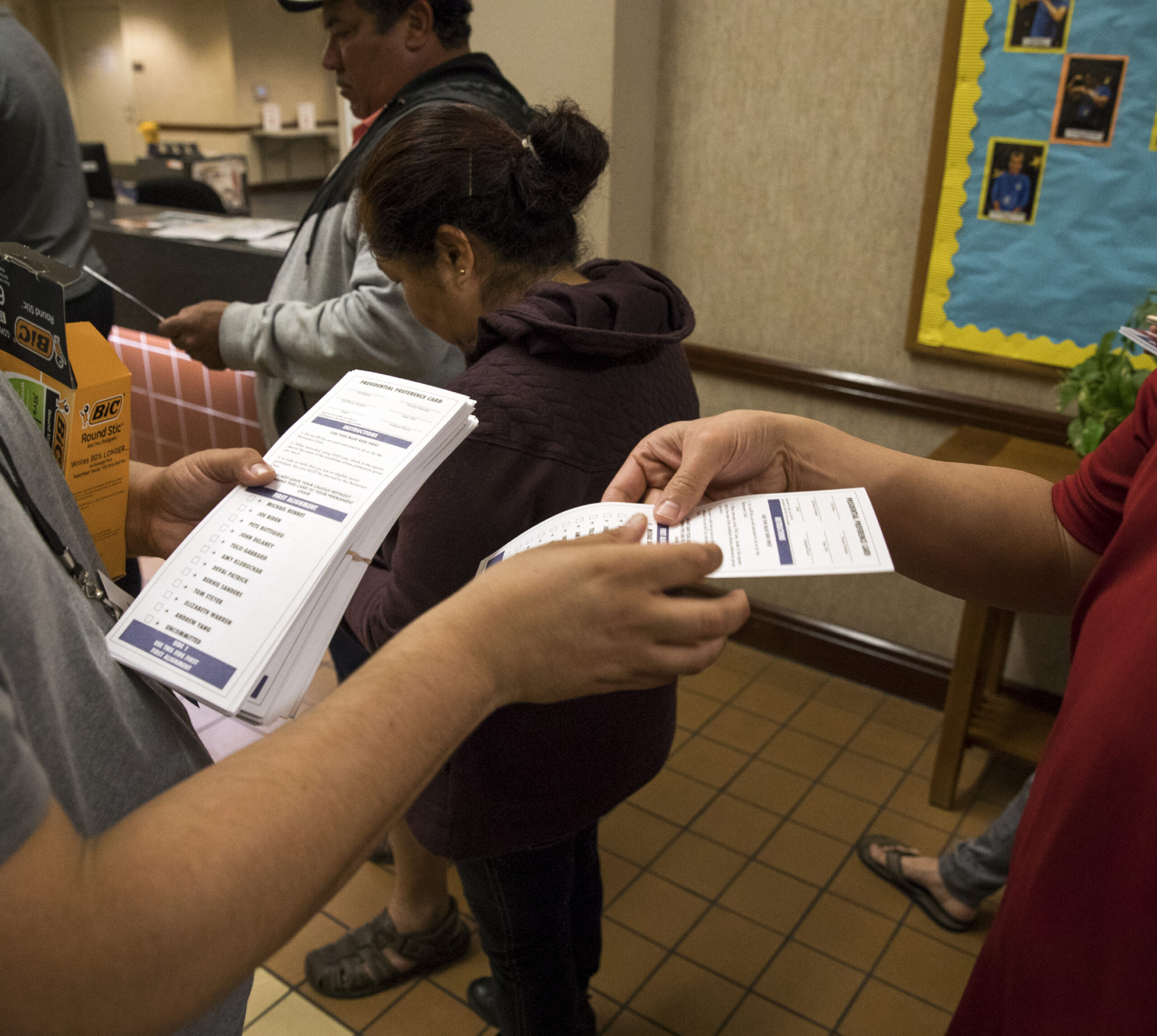 The Nevada Democratic Party touted the state’s racial diversity, its competitiveness in recent elections and its ability to host the first-in-the-nation presidential primary in its application to the Democratic National Committee as part of the process to refresh the presidential-nomination calendar.

The DNC’s Rules and Bylaws Committee (RBC) will select up to five states in July to hold early primaries. But first, the RBC will decide which of the 19 states and Democrats Abroad, all of which signaled interest in applying, will be allowed to make presentations at the panel’s meeting June 22-24..

The RBC then needs to determine the order of the five states chosen to go early; that will likely occur in July, as well. Nevada is making its case to go first. The Silver State currently goes third after Iowa and New Hampshire. The Granite State may be Nevada’s biggest rival to go first.

“As a highly competitive battleground state and national leader on voter access with one of the most diverse populations in the country and strong union representation, Nevada is perfectly aligned with every goal of the RBC in crafting a new pre-window calendar for the 2024 nominating contests,” the Nevada Democratic Party said in its application, a copy of which was obtained by The Nevada Independent.

“If the DNC is fully committed to these goals, then Nevada is uniquely well-positioned to both retain our early state status and be the next First in the Nation primary,” the application said.

States had until last Friday to formally apply after submitting a letter of intent. Nevada Democrats sent the letter of intent in May and submitted the application by the Friday deadline, the group said in a press release.

The application struck many of the same notes as a brochure Nevada Democrats had circulated early in the process making the state’s case.

The group argued that Nevada does well in each area that the RBC wants to improve for states that hold presidential primaries early in the process, which set the tone for the primary season.

Those criteria include racial and ethnic diversity, geographic diversity and union representation.

Concerning racial and ethnic diversity, Nevada is the third-most diverse state in the country, according to the U.S. census. Hispanics and Latinos make up almost 30 percent of the population. African-Americans make up 10.3 percent, and Asians are at 8.7 percent.

That compares favorably with New Hampshire, where the Latino population totals just 4 percent, African-Americans make up 1.8 percent and Asians are at 3 percent. The Granite State is the 48th most diverse state, according to the U.S. Census Diversity Index.

Nevada’s Asian and Pacific Islander (AAPI) population is one of the fastest-growing, and the state is also home to 27 different tribal nations.

Geographically, the state has large population centers, such as Clark County, which has tripled in population over the last 30 years. It also has 15 very rural counties. The state ranks 32nd in population, and only nine states are less densely populated.

By comparison, the biggest city in New Hampshire is Manchester, home to just 115,000 people — less than half the size of Reno.

With a leisure and tourism economy, Nevada also has a highly unionized workforce. According to the Bureau of Labor Statistics, the state ranks 15th for the percentage of employees represented by unions, above the national average and other early nominating states.

About 10 percent of New Hampshire workers belong to a union compared to 12.2 percent  in  Nevada.

The state is also home to the Culinary Union, the state’s largest labor organization, which represents roughly 60,000 members in Las Vegas and Reno and is Nevada’s largest Latino/AAPI/immigrant organization — with members who are majority women, from 178 countries, and speak over 40 different languages.

The RBC wants the early states to be good tests for presidential candidates, which will help them do well in the general election, so they want them to be competitive. Nevada Democrats argued that the state is an excellent proving ground for candidates, given recent elections.

“Cycle after cycle, Nevada is one of the most consistently competitive battleground states in the country—in the presidential race, in Senate and House races, in Governor’s races, and down the ballot to state constitutional and legislative races,” the application said.

In 2020 and 2016, President Joe Biden and Democratic Presidential nominee Hillary Clinton only won the state by 2 points. In New Hampshire, Biden won by more than 7 percent in 2020.

The state’s competitiveness is currently playing out in the U.S. Senate race. Several prognosticators have rated Sen. Catherine Cortez Masto (D-NV) as the most endangered senator. The race is expected to be close with independent voters, who have been registering at a greater rate than Democrats or Republicans, likely to determine the outcome of a close race.

Nevada Democrats also touted winning close races in 2016, including Cortez Masto’s seat, which she won by 2 points. They also highlighted victories in 2018, including Sen. Jacky Rosen (D-NV) flipping a Senate seat to the Democrats with a 5-point win over incumbent Sen. Dean Heller (R-NV). Gov. Steve Sisolak, a Democrat, also won his race in 2018.

On the ability to hold a fair and effective primary—what the RBC calls feasibility — the application underscored that the Nevada presidential primary in 2024 will feature many ways for people to vote.

These include same-day voter registration, more than two weeks of early voting, universal vote by mail, and Election Day vote centers, which allow voters to cast their ballots in person anywhere in their home county near where they work or live.

In New Hampshire, the state’s GOP-led Legislature and Republican Gov. Chirs Sununu have pushed to enact bills to restrict voting.

Another attractive feature, the application said, is that Nevada’s two main media markets cover 90 percent of the state, allowing candidates to get their message out efficiently. Several non-English media outlets would also enable candidates to engage with voters of color.

The group has the backing of other Democrats for this effort.

“The State Party, Governor, and Legislative leaders are united in the push for Nevada to remain in the pre-window and host the First in the Nation primary,” the application said.